Using InSAR Coherence for Investigating the Interplay of Fluvial and Aeolian Features in Arid Lands: Implications for Groundwater Potential in Egypt
Next Article in Special Issue

Kalimantan poses one of the highest carbon emissions worldwide since its landscape is strongly endangered by deforestation and degradation and, thus, carbon release. The goal of this study is to conduct large-scale monitoring of above-ground biomass (AGB) from space and create more accurate biomass maps of Kalimantan than currently available. AGB was estimated for 2007, 2009, and 2016 in order to give an overview of ongoing forest loss and to estimate changes between the three time steps in a more precise manner. Extensive field inventory and LiDAR data were used as reference AGB. A multivariate linear regression model (MLR) based on backscatter values, ratios, and Haralick textures derived from Sentinel-1 (C-band), ALOS PALSAR (Advanced Land Observing Satellite’s Phased Array-type L-band Synthetic Aperture Radar), and ALOS-2 PALSAR-2 polarizations was used to estimate AGB across the country. The selection of the most suitable model parameters was accomplished considering VIF (variable inflation factor), p-value, R2, and RMSE (root mean square error). The final AGB maps were validated by calculating bias, RMSE, R2, and NSE (Nash-Sutcliffe efficiency). The results show a correlation (R2) between the reference biomass and the estimated biomass varying from 0.69 in 2016 to 0.77 in 2007, and a model performance (NSE) in a range of 0.70 in 2016 to 0.76 in 2007. Modelling three different years with a consistent method allows a more accurate estimation of the change than using available biomass maps based on different models. All final biomass products have a resolution of 100 m, which is much finer than other existing maps of this region (>500 m). These high-resolution maps enable identification of even small-scaled biomass variability and changes and can be used for more precise carbon modelling, as well as forest monitoring or risk managing systems under REDD+ (Reducing Emissions from Deforestation, forest Degradation, and the role of conservation, sustainable management of forests, and enhancement of forest carbon stocks) and other programs, protecting forests and analyzing carbon release. View Full-Text
Keywords: above-ground biomass; carbon; SAR; backscatter approach; multivariate linear regression modelling; biomass change mapping; Indonesia; tropical deciduous forest above-ground biomass; carbon; SAR; backscatter approach; multivariate linear regression modelling; biomass change mapping; Indonesia; tropical deciduous forest
►▼ Show Figures 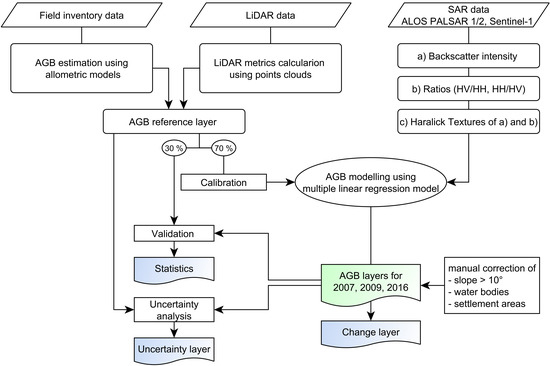