Multi-Annual Kinematics of an Active Rock Glacier Quantified from Very High-Resolution DEMs: An Application-Case in the French Alps
Previous Article in Journal

Thaw Subsidence of a Yedoma Landscape in Northern Siberia, Measured In Situ and Estimated from TerraSAR-X Interferometry

In permafrost areas, seasonal freeze-thaw cycles result in upward and downward movements of the ground. For some permafrost areas, long-term downward movements were reported during the last decade. We measured seasonal and multi-year ground movements in a yedoma region of the Lena River Delta, Siberia, in 2013–2017, using reference rods installed deep in the permafrost. The seasonal subsidence was 1.7 ± 1.5 cm in the cold summer of 2013 and 4.8 ± 2 cm in the warm summer of 2014. Furthermore, we measured a pronounced multi-year net subsidence of 9.3 ± 5.7 cm from spring 2013 to the end of summer 2017. Importantly, we observed a high spatial variability of subsidence of up to 6 cm across a sub-meter horizontal scale. In summer 2013, we accompanied our field measurements with Differential Synthetic Aperture Radar Interferometry (DInSAR) on repeat-pass TerraSAR-X (TSX) data from the summer of 2013 to detect summer thaw subsidence over the same study area. Interferometry was strongly affected by a fast phase coherence loss, atmospheric artifacts, and possibly the choice of reference point. A cumulative ground movement map, built from a continuous interferogram stack, did not reveal a subsidence on the upland but showed a distinct subsidence of up to 2 cm in most of the thermokarst basins. There, the spatial pattern of DInSAR-measured subsidence corresponded well with relative surface wetness identified with the near infra-red band of a high-resolution optical image. Our study suggests that (i) although X-band SAR has serious limitations for ground movement monitoring in permafrost landscapes, it can provide valuable information for specific environments like thermokarst basins, and (ii) due to the high sub-pixel spatial variability of ground movements, a validation scheme needs to be developed and implemented for future DInSAR studies in permafrost environments. View Full-Text
Keywords: permafrost; thaw subsidence; in situ measurements; DInSAR; TerraSAR-X; Lena River Delta; yedoma permafrost; thaw subsidence; in situ measurements; DInSAR; TerraSAR-X; Lena River Delta; yedoma
►▼ Show Figures 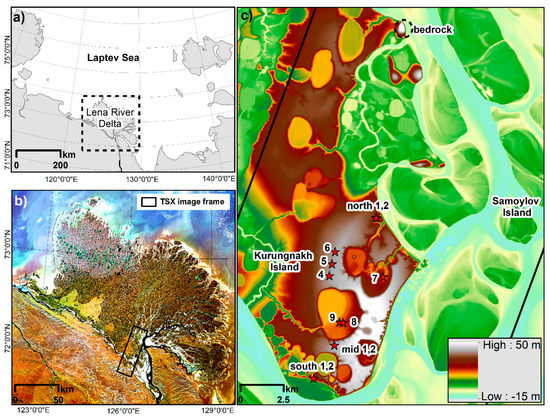