Precipitation estimates derived from the Eta model and from TRMM (Tropical Rainfall Measuring Mission) and CHIRPS (Climate Hazards Group InfraRed Precipitation with Station data) remotely sensed data were compared to the precipitation data of the INMET (National Institute of Meteorology) meteorological stations in the south-southeast region of Minas Gerais state, Brazil, in the period between July 2009 and June 2015. Then, information about evapotranspiration (ETR), water deficit (DEF), and water surplus (EXC) was obtained from the precipitation data, using the sequential water balance (SWB) separately for each type of precipitation data (INMET, TRMM, Eta, and CHIRPS). Subsequently, the components of the SWB were comparatively analyzed. The results indicate that all three products overestimate rainfall. The strongest relationships between the INMET data and the estimated data were observed for the TRMM, in terms of precipitation estimates, as well as DEF, EXC, and ETR components. The Eta precipitation estimates are overestimated relative to those from INMET, resulting in underestimation of the water deficit (DEFETA) and overestimation of evapotranspiration (ETRETA). In general, the CHIRPS data presented a pattern similar to the station data, though statistical analyses were lower than those of the TRMM data. View Full-Text
Keywords: water deficit; 3B42; Evapotranspiration water deficit; 3B42; Evapotranspiration
►▼ Show Figures 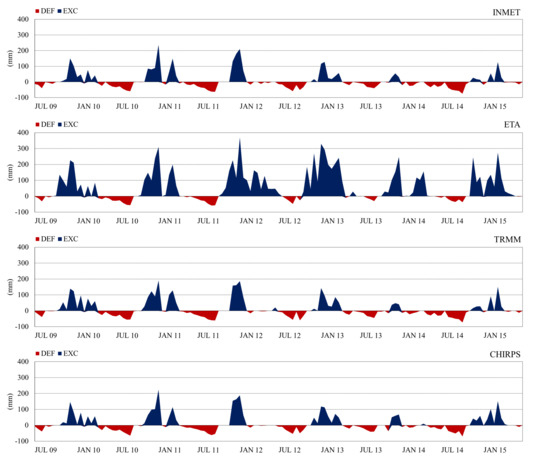