Soil Moisture in the Biebrza Wetlands Retrieved from Sentinel-1 Imagery

The objective of the study was to estimate soil moisture (SM) from Sentinel-1 (S-1) satellite images acquired over wetlands. The study was carried out during the years 2015–2017 in the Biebrza Wetlands, situated in north-eastern Poland. At the Biebrza Wetlands, two Sentinel-1 validation sites were established, covering grassland and marshland biomes, where a network of 18 stations for soil moisture measurement was deployed. The sites were funded by the European Space Agency (ESA), and the collected measurements are available through the International Soil Moisture Network (ISMN). The SAR data of the Sentinel-1 satellite with VH (vertical transmit and horizontal receive) and VV (vertical transmit and vertical receive) polarization were applied to SM retrieval for a broad range of vegetation and soil moisture conditions. The methodology is based on research into the effect of vegetation on backscatter (σ°) changes under different soil moisture and Normalized Difference Vegetation Index (NDVI) values. The NDVI was derived from the optical imagery of a MODIS (Moderate Resolution Imaging Spectroradiometer) sensor onboard the Terra satellite. It was found that the state of the vegetation expressed by NDVI can be described by the indices such as the difference between σ° VH and VV, or the ratio of σ° VV/VH, as calculated from the Sentinel-1 images in the logarithmic domain. The most significant correlation coefficient for soil moisture was found for data that was acquired from the ascending tracks of the Sentinel-1 satellite, characterized by the lowest incidence angle, and SM at a depth of 5 cm. The study demonstrated that the use of the inversion approach, which was applied to the newly developed models using Water Cloud Model (WCM) that includes the derived indices based on S-1, allowed the estimation of SM for wetlands with reasonable accuracy (10 vol. %). The developed soil moisture retrieval algorithms based on S-1 data are suited for wetland ecosystems, where soil moisture values are several times higher than in agricultural areas. View Full-Text
Keywords: Sentinel-1 backscatter; polarization; Terra MODIS; NDVI; soil moisture Sentinel-1 backscatter; polarization; Terra MODIS; NDVI; soil moisture
►▼ Show Figures 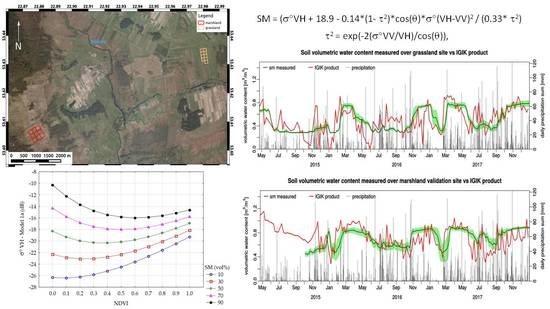