The Global Precipitation Measurement (GPM) mission Core Observatory is equipped with a dual-frequency precipitation radar (DPR) with capability of measuring precipitation simultaneously at frequencies of 13.6 GHz (Ku-band) and 35.5 GHz (Ka-band). Since the GPM-DPR cannot use information from polarization diversity, radar reflectivity factor is the most important parameter used in all retrievals. In this study, GPM’s observations of reflectivity at dual-frequency and instantaneous rainfall products are compared quantitatively against dual-polarization ground-based NEXRAD radars from the GPM Validation Network (VN). The ground radars, chosen for this study, are located in the southeastern plains of the U.S.A. with altitudes varying from 5 to 210 m. It is a challenging task to quantitatively compare measurements from space-based and ground-based platforms due to their difference in resolution volumes and viewing geometry. To perform comparisons on a point-to-point basis, radar observations need to be volume matched by averaging data in common volume or by re-sampling data to a common grid system. In this study, a 3-D volume matching technique first proposed by Bolen and Chandrasekar (2003) and later modified by Schwaller and Morris (2011) is applied to both radar data. DPR and ground radar observations and products are cross validated against each other with a large data set. Over 250 GPM overpass cases at 5 NEXRAD locations, starting from April 2014 to June 2018, have been considered. Analysis shows that DPR Ku- and Ka-Band reflectivities are well matched with ground radar with correlation coefficient as high as 0.9 for Ku-band and 0.85 for Ka-band. Ground radar calibration is also checked by observing variation in mean biases of reflectivity between DPR and GR over time. DPR rainfall products are also evaluated. Though DPR underestimates higher rainfall rates in convective cases, its overall performance is found to be satisfactory. View Full-Text
Keywords: GPM; DPR; validation network; volume matching; reflectivity; rainfall rate GPM; DPR; validation network; volume matching; reflectivity; rainfall rate
►▼ Show Figures 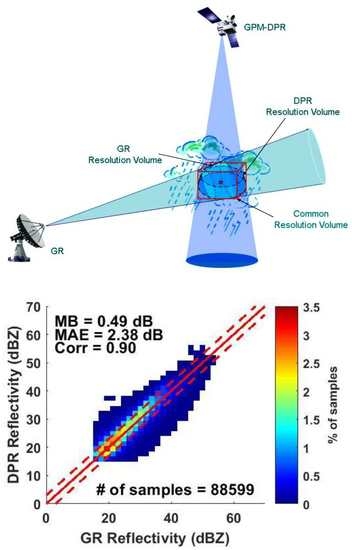