Alpine ecosystems are particularly sensitive to climate change, and therefore it is of significant interest to understand the relationships between phenology and its seasonal drivers in mountain areas. However, no alpine-wide assessment on the relationship between land surface phenology (LSP) patterns and its climatic drivers including snow exists. Here, an assessment of the influence of snow cover variations on vegetation phenology is presented, which is based on a 17-year time-series of MODIS data. From this data snow cover duration (SCD) and phenology metrics based on the Normalized Difference Vegetation Index (NDVI) have been extracted at 250 m resolution for the entire European Alps. The combined influence of additional climate drivers on phenology are shown on a regional scale for the Italian province of South Tyrol using reanalyzed climate data. The relationship between vegetation and snow metrics strongly depended on altitude. Temporal trends towards an earlier onset of vegetation growth, increasing monthly mean NDVI in spring and late summer, as well as shorter SCD were observed, but they were mostly non-significant and the magnitude of these tendencies differed by altitude. Significant negative correlations between monthly mean NDVI and SCD were observed for 15–55% of all vegetated pixels, especially from December to April and in altitudes from 1000–2000 m. On the regional scale of South Tyrol, the seasonality of NDVI and SCD achieved the highest share of correlating pixels above 1500 m, while at lower elevations mean temperature correlated best. Examining the combined effect of climate variables, for average altitude and exposition, SCD had the highest effect on NDVI, followed by mean temperature and radiation. The presented analysis allows to assess the spatiotemporal patterns of earth-observation based snow and vegetation metrics over the Alps, as well as to understand the relative importance of snow as phenological driver with respect to other climate variables. View Full-Text
Keywords: mountains; phenology; NDVI; snow cover; climate variability; impact of climate change; MODIS; Alps mountains; phenology; NDVI; snow cover; climate variability; impact of climate change; MODIS; Alps
►▼ Show Figures 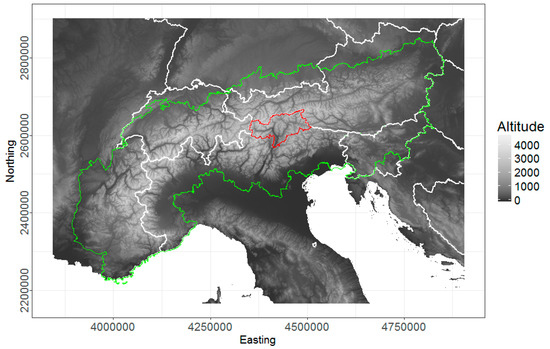