Microwave remote sensing has found numerous applications in areas affected by permafrost and seasonally frozen ground. In this study, we focused on data obtained by the Advanced Scatterometer (ASCAT, C-band) during winter periods when the ground is assumed to be frozen. This paper discusses the relationships of ASCAT backscatter with snow depth, air and ground temperature through correlations and the analysis of covariance (ANCOVA) to quantify influences on backscatter values during situations of frozen ground. We studied sites in Alaska, Northern Canada, Scandinavia and Siberia. Air temperature and snow depth data were obtained from 19 World Meteorological Organization (WMO) and 4 Snow Telemetry (SNOTEL) stations. Ground temperature data were obtained from 36 boreholes through the Global Terrestrial Network for Permafrost Database (GTN-P) and additional records from central Yamal. Results suggest distinct differences between sites with and without underlying continuous permafrost. Sites characterized by high freezing indices (>4000 degree-days) have consistently stronger median correlations of ASCAT backscatter with ground temperature for all measurement depths. We show that the dynamics in winter-time backscatter cannot be solely explained through snow processes, but are also highly correlated with ground temperature up to a considerable depth (60 cm). These findings have important implications for both freeze/thaw and snow water equivalent retrieval algorithms based on C-band radar measurements.
Keywords: permafrost; ASCAT; backscatter; snow; C-band permafrost; ASCAT; backscatter; snow; C-band

The Arctic is an area prone to issues of data scarcity. In this study, we used data from a variety of sources, including in situ measurements, remote sensing data and additional datasets describing freezing and thawing indices, landcover, soil properties and permafrost type. Due to data scarcity, in situ datasets for the different parameters are not always available for the same stations. We used air temperature and snow depth data from 19 World Meteorological Organization (WMO) and four Snow Telemetry (SNOTEL) stations and ground temperature measurements from 36 boreholes in Siberia, Alaska, northern Canada and Scandinavia through the Global Terrestrial Network for Permafrost Database (GTN-P) and additional records from boreholes on central Yamal (see Figure 2). We utilize backscatter records by the Metop Advanced SCATterometer (ASCAT) contained in the data product ASCAT Soil Moisture at 12.5 km Swath Grid–Metop retrieved from the European Organisation for the Exploitation of Meteorological Satellites (EUMETSAT) repository.

The scatterometer data were obtained from the ASCAT sensor on board the Metop satellites (A and B). The ASCAT is a C–band (5.255 GHz, VV–polarization) instrument [49]. The available records (backscatter, sigma0 ()) have a resolution of 25 km and correspond to different incidence angles. The measurements were re–gridded to a 12.5 km grid [49] and the incidence angles are normalized to a one value at 40° by a procedure described in [50]. Records have been obtained from the EUMETSAT repository (data product ASCAT Soil Moisture at 12.5 km Swath Grid–Metop) and time series for each site covering the years 2007 to 2017 and was individually subset depending on the temporal availability of in situ data at the different sites. The ASCAT data used throughout this study were given in decibel (dB) and is reprocessed according to the WAter Retrieval Package 5 (WARP5) algorithm accounting for noise including instrument noise, speckle and azimuthal anisotropies [50,51].

For the further interpretation of the results, we used additional datasets. To analyze the association with permafrost type we used long–term freezing and thawing indices. Frauenfeld et al. [52] describe a long–term freezing and thawing index for the northern hemisphere which is accessible at [53]. This dataset is based on long–term temperature datasets from 1901–2002 and shows no gaps in the areas considered in this study. The freezing and thawing index is understood to be related to the mean annual air temperature and with that to the permafrost type [52]. Therefore, we used the difference in freezing indices to group the data and discover possible relationships between permafrost type and backscatter dependencies.
To ananylse our results with respect to landcover, we used the GLC2000 landcover map of Northern Eurasia [54] and North America [55] from the Global Land Cover 2000 Project (GLC2000) [56] and the vegetation map of the Norsk Polarinstitutt [57], as the measurement stations on Svalbard are not covered by the GLC2000. To make the the landcover types more comparable between the maps, we summarized them to low vegetation (includes the landscape types Tundra, Consolidated Rock/Sparse Vegetation, Polar Grassland and Subpolar Grassland), medium vegetation (includes the landscape types Sedge Tundra, Prostrate Shrub Tundra, Shrub Tundra and Shrubs), forest (includes the landscape types Subpolar Needleleaved Evergreen Forest, Temperate or Sub–polar Needleleaved Evergreen Forest and Deciduous Needle–leaf Forest), lake rich (includes the landscape type Water bodies), and bogs (includes the landscape type Bogs and marches). To include the soil type in our analysis we extracted the soil type for all points from the Harmonized world soil database [58].

We confined our analysis to the winter period to exclude situations of wet snow and thawed ground. Wet snow is known to have different backscatter characteristics compared to dry snow [59,60], situations of melting snow were therefore excluded. For this purpose, we only included data from December to March for each year. To take additional precautions in avoiding thawing and freezing conditions a temperature limit of °C (daily mean value) was introduced for air temperature as well as ground temperature to exclude situations of melting snow occurring during the selected time period. To take influences of topography into consideration, backscatter values from ascending and descending orbits were treated separately. Additionally to the influence of topography, the acquisition time of the ASCAT backscatter data varies for ascending and descending orbits. To ensure maximum consistency between the different datasets, daily means of temperature measurements were used, as most time series were already given in this format. As we limited our analysis to winter periods, we assume backscatter values from mid–day acquisitions to be less representative of the daily mean. Figure 3 shows average acquisition times for both orbits for the locations of all considered boreholes. For stations where average acquisition times (as seen in Figure 3) during mid–day occurred, we excluded those results from further analysis and used only the evening or night–time measurements. For stations where neither orbits had average acquisition times during mid–day (Banks_Island and Mould_Bay), mean values of the correlations of both orbits where used in the final analysis.
We considered available temperature measurements for depths up to 1 m. Measurements were grouped into 0.1 m classes from 0.1 m to 1 m, and 5 cm classes for near surface measurements (see Figure 4 and Figure 5). Studying depths up to 1m allowed us to account for differing penetration depths of ASCAT backscatter (differing between sites as well as during the frozen season) and a possibly decreasing association between ASCAT backscatter and ground temperatures with depth. Additionally, for sites lacking sensors for near–surface measurements, this allowed us to study the association of backscatter and ground temperature despite a lack of near–surface temperature measurements. This is possible as temperature measurements from different depths are assumed to be highly correlated and reasonable assumptions can be made well below the effective sampling depth [61]. The penetration depths of the microwave signal has been shown to decrease with increasing moisture content [15] and C–band microwaves are known to penetrate approximately the upper 5 cm of the soil (e.g., [13,62]). For frozen soil, the penetration depth of the microwaves has been shown to be significantly higher compared to wet soil [28,29,63,64,65,66]. For C–band the penetration depth for frozen soil has been shown to be up to 9 cm deeper compared to thawed conditions [63,64]. For the detailed analysis of the results (including comparisons between different landscape types and soil textures) we focus on the upper 20 cm. This still allows for variable penetrations depths [67,68] (especially considering deeper penetration for frozen conditions) but avoids misconceptions of interactions of backscatter and ground temperature from deeper measurements.
The data were tested for normality of the noise term to judge the reliability of the resulting p–values. The normality of the residuals was tested employing the Anderson–Darling test [69]. To minimize the influence of autocorrelation (which is presumed to be strong if two measurements occur in quick succession), we only considered measurements at most every second day.
To make sure the length of the time series was appropriate for statistical analysis, we excluded sites where only one year was available as well as those where less than 100 winter values remained after the previously described steps.

3.2. Correlation of In Situ Variables with ASCAT Backscatter

To quantify the association between the time series of air temperature, snow depth and ground temperature with ASCAT, backscatter we used the Pearson Correlation coefficient. We calculated correlations for each location seen in Figure 2. To investigate inter annual variations, all calculations were done once separately for each year and once combining all the available years.
To investigate a possible relationship of freezing index and backscatter dependency on ground temperature we created two groups depending on the dataset [53] presented in [52]. A freezing index of 4000 degree–days was chosen as the threshold dividing the data into a warm and a cold group for comparison. The value was chosen in agreement with Smith and Riseborough [70] who have reported that this value corresponds to a MAAT of approx. °C and southern limits of continuous permafrost. Gruber [71] have found this to correspond to about 90% of permafrost extent. A possible relationship of the results with the present landcover was investigated using aggregated landcover classes (low vegetation, medium vegetation, Forest, lake rich) based on the GLC2000 landcover map of Northern Eurasia [54] and North America [55] and the vegetation map of the Norsk Polarinstitutt [57]. Results were also analyzed for possible differences between soil textures [58].

3.3. ANCOVA Analysis of ASCAT Backscatter and In Situ Variables

4.3. Influence of Landscape and Soil Type on Ground Temperature Dependency

This study examines the relationship of ASCAT backscatter with air temperature and snow depth for 21 sites and the relationship of backscatter and ground temperature for a total of 36 boreholes. We found strong correlations of winter backscatter and ground temperatures at depths up to 60 cm for cold areas (above 4000 freezing degree–days, likely continuous permafrost). Interactions of backscatter and the ground surface can therefor not be ruled out during winter–time as it might lead to strong biases. Results for the analysis of snow depth and air temperature showed weaker correlations. We found a distinct difference in the correlation of backscatter with ground temperature for cold and warm sites (1600–4000 freezing degree days, likely non–continuous permafrost) which show smaller correlations for all depths. Results are likely impacted by snow metamorphism, the underlying soil and its characteristics as well as vegetation. However, these factors are not independent variables and their influences could not be separated using the available data.
The results highlight the importance and complexity of winter–time processes of all three variables as well as their specific winter–time relationships with C–band backscatter. We conclude that neglecting these processes can introduce strong biases into freeze/thaw and snow characteristics retrieval algorithms. The differences between continuous and non–continuous permafrost sites suggest the possibility of improving the mapping of these features by including winter–time analysis.

This work was supported by the Austrian Science Fund (Fonds zur Förderung der wissenschaftlichen Forschung, FWF) through the Doctoral College GIScience (DK W1237–N23) as well as FWF Grant I 1401 and the Russian Foundation for Basic Research Grant 13-05-91001-ANF-a (Joint Russian–Austrian project COLD–Yamal). We would like to thank Sebastian Hahn (Vienna University of Technology) for extraction of records from the TU Wien ASCAT repository for a subset of the sites used in an earlier version of this manuscript. We would like to thank the two anonymous reviewers for their valuable comments.

The founding sponsors had no role in the design of the study; in the collection, analyses, or interpretation of data; in the writing of the manuscript, and in the decision to publish the results. 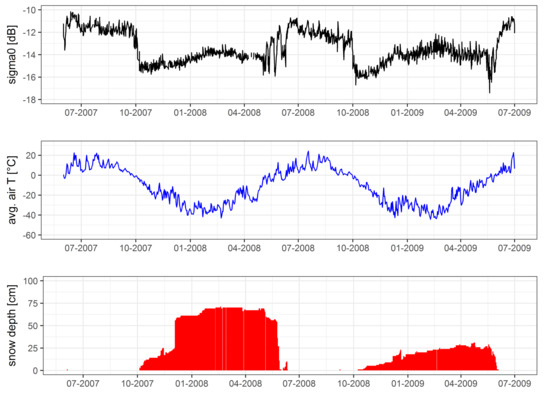 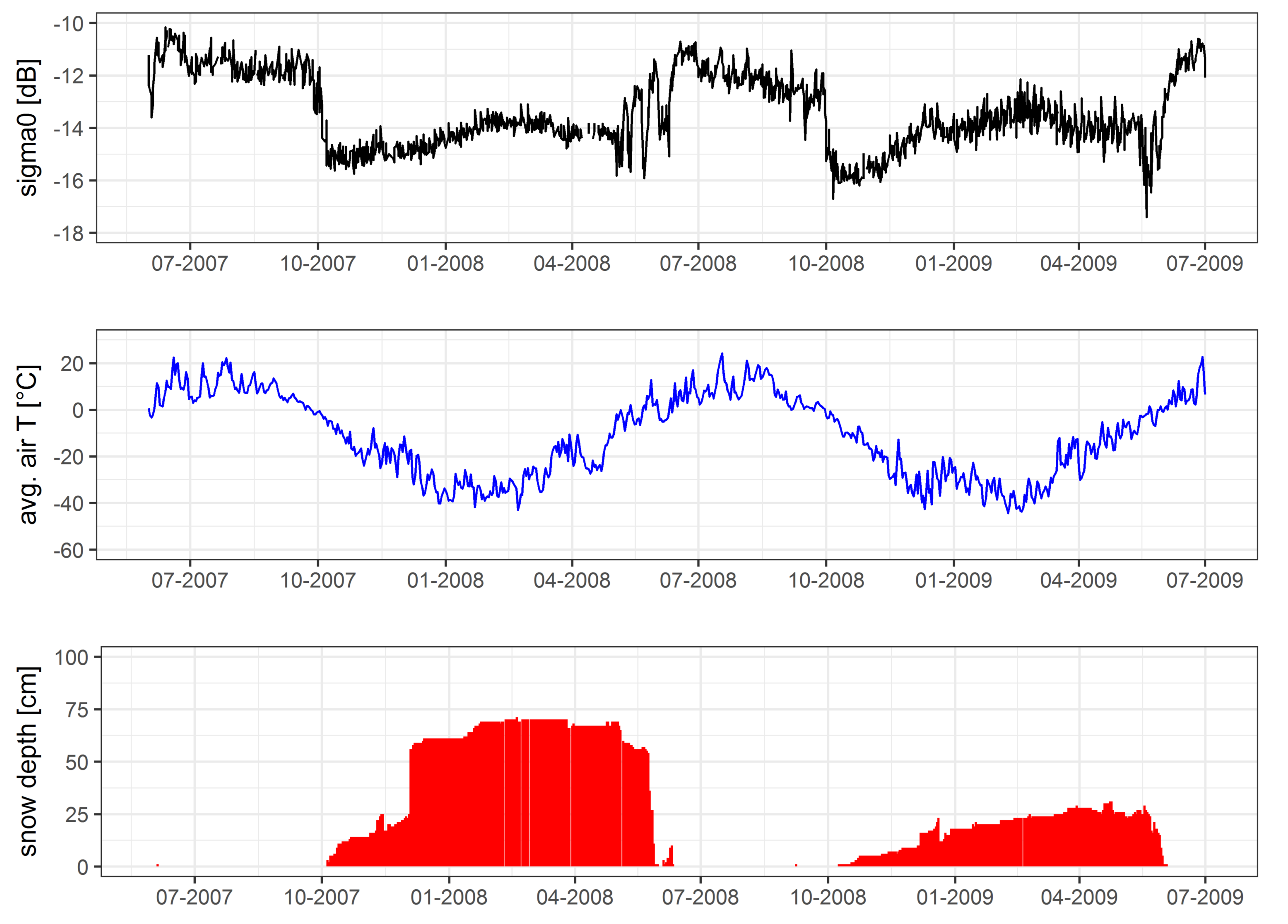 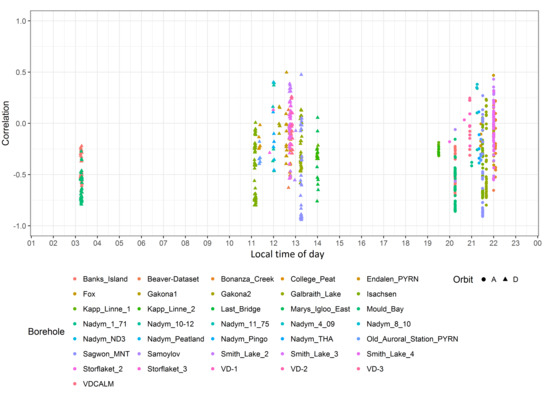 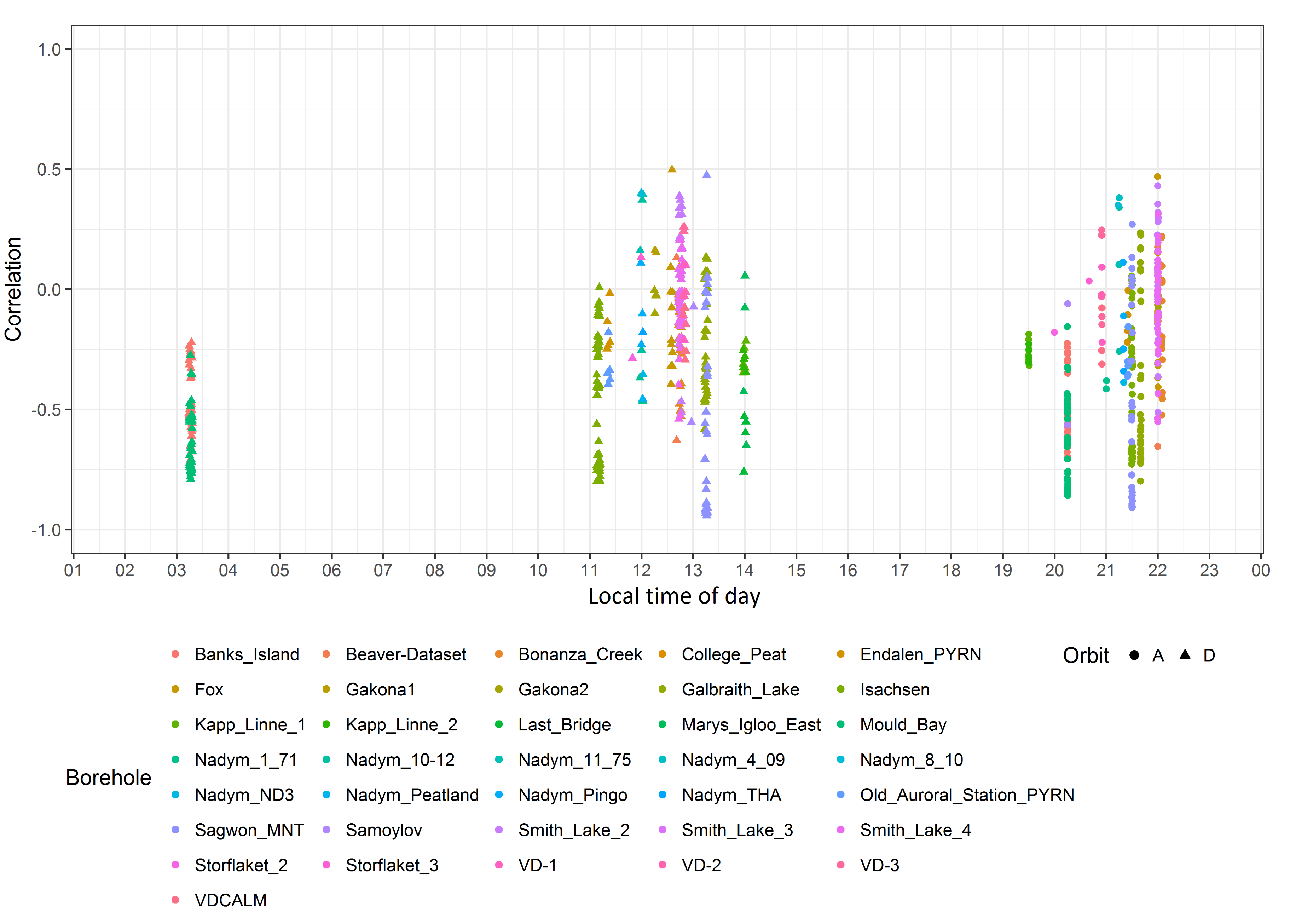 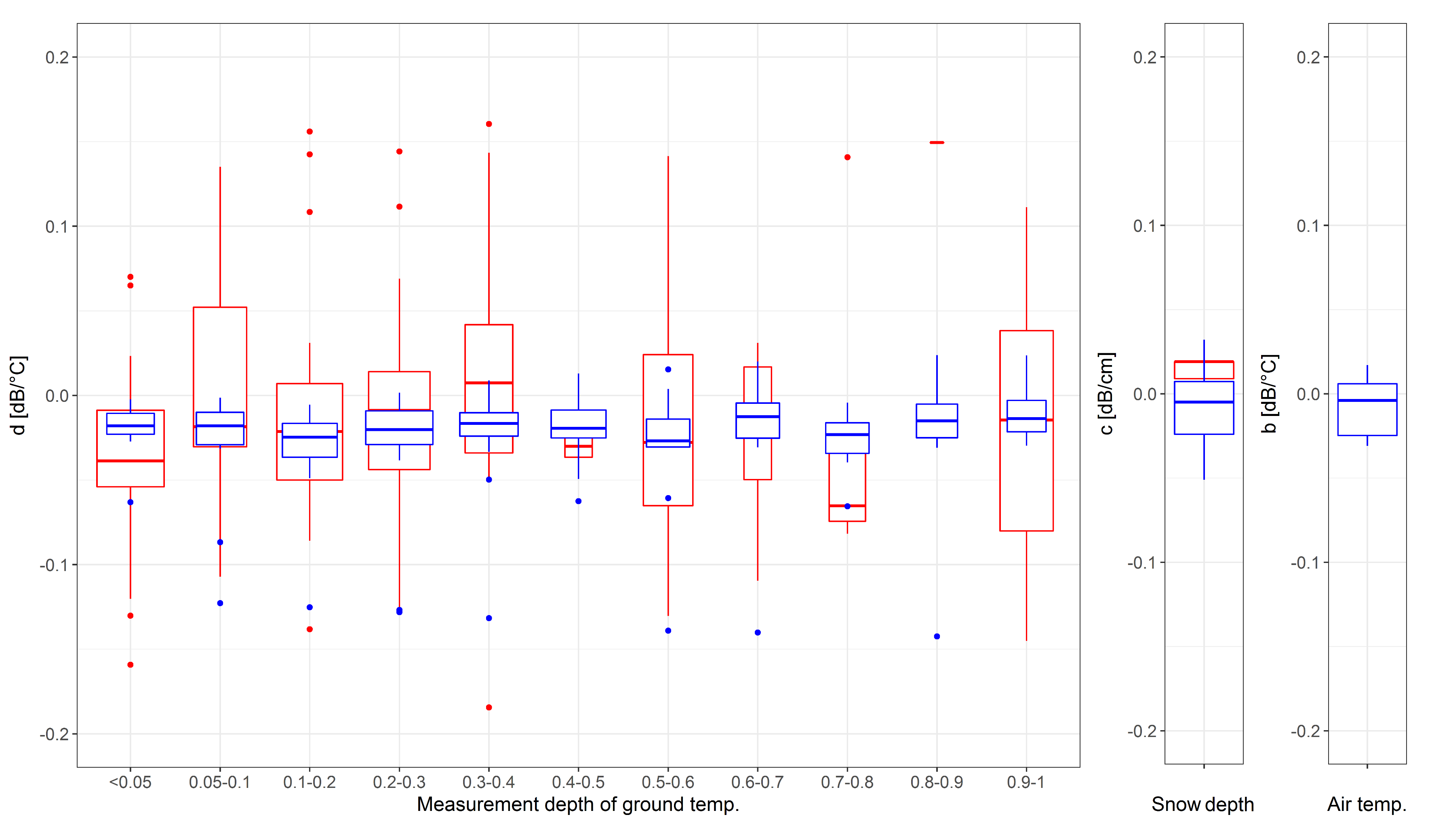 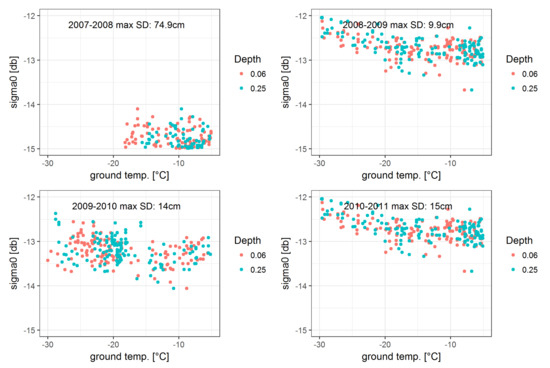 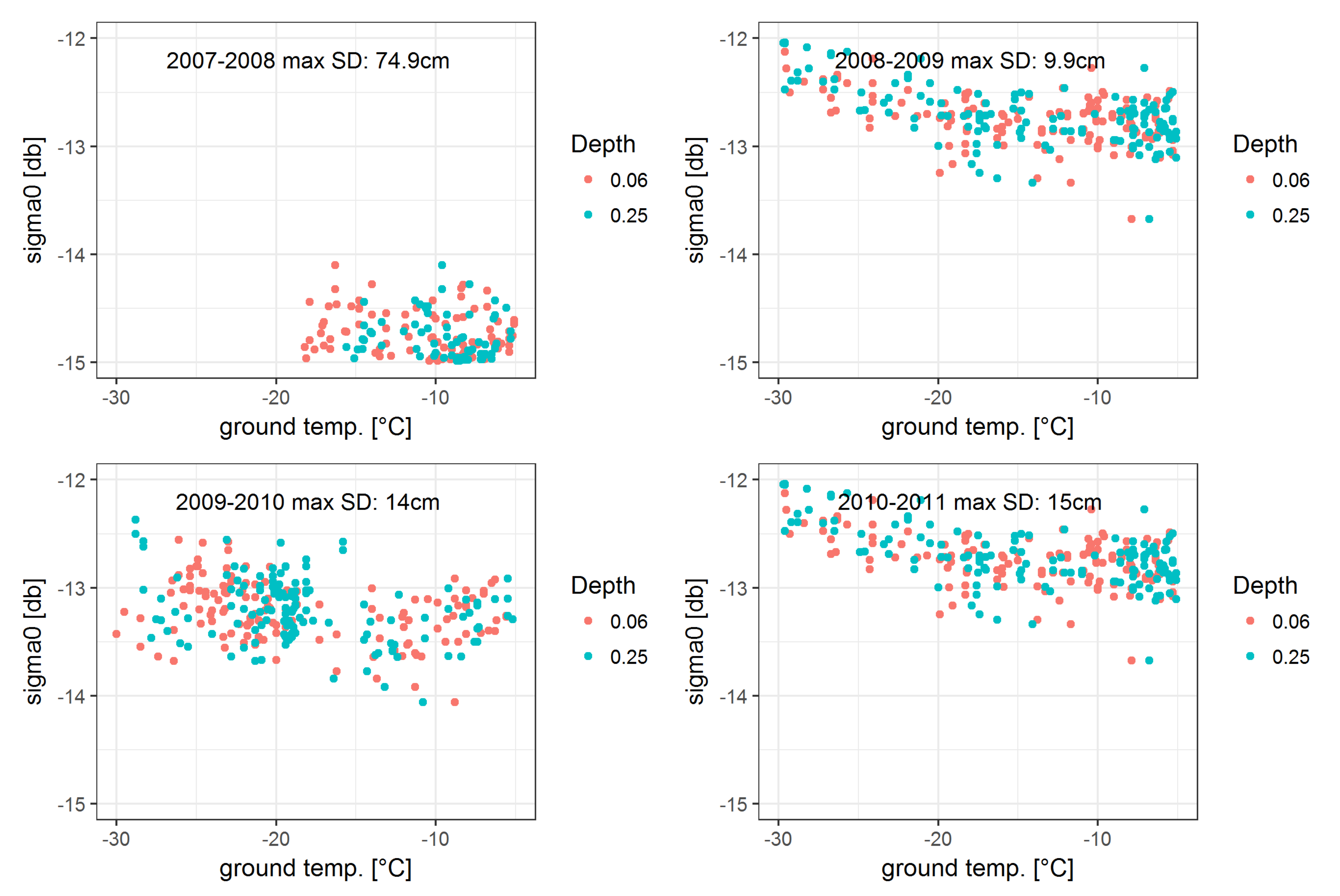 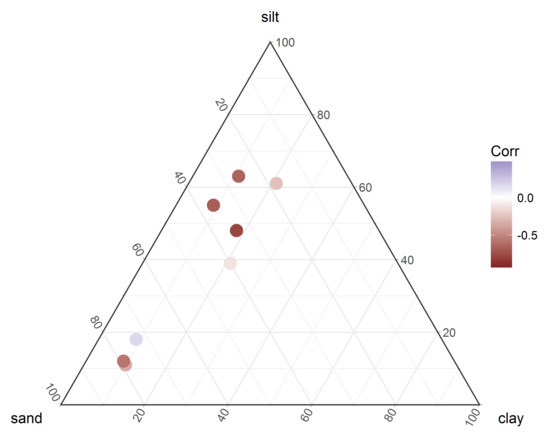 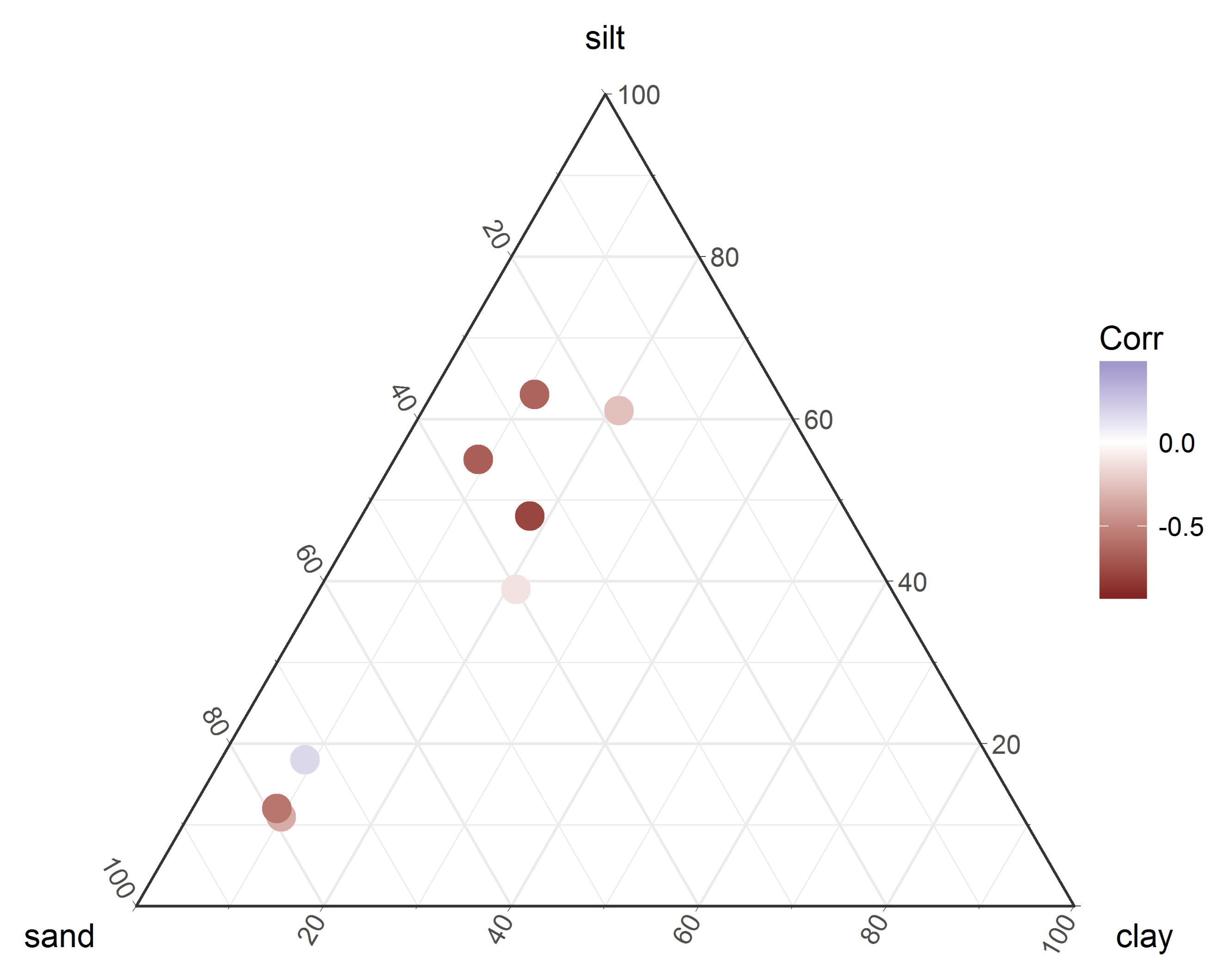