Circuity Characteristics of Urban Travel Based on GPS Data: A Case Study of Guangzhou
Previous Article in Journal

Are Crowdsourced Datasets Suitable for Specialized Routing Services? Case Study of OpenStreetMap for Routing of People with Limited Mobility

Encouraging commuters to use active travel (cycling and walking) instead of inactive travel (travel by motorized vehicles) would produce health benefits [1,2,3,4,5,6,7] and reduce air pollution [8,9,10,11]. Policymakers conduct environmental interventions to encourage cycling to work, such as improving cycling infrastructure. This is explained by some studies focusing on the purposes of cycling, attitudes toward cycling, and experiences of cycling [12,13,14,15,16,17,18,19,20,21]. Typically, a better cycling infrastructure is associated with positive experiences and positive attitudes, and thus tends to increase the usage of bikes [15,17,19]. Recently, one new way in which cities seek to increase the usage of bikes is by implementing bicycle sharing systems (BSSs) to facilitate short-term bicycle rental in urban areas [22]. New studies reveal that BSSs have positive health impacts [22,23], and reduce the usage of motor vehicles [11,24].
Earlier studies reveal that the cycling behavior of regular riders (private bicycle riders) tends to be influenced by environmental factors, including population density, land use mix, green space, cycling facilities, and safety [25,26,27,28,29,30]. It is increasingly interesting to investigate how environmental factors influence the cycling behavior of BSS cyclists, as BSS cyclists tend to be different from regular cyclists. For instance, in the UK, the USA, and Australia, BSS riders are on average disproportionately of higher education and income, and more likely to be male and white [31]. Therefore, in very recent years, some studies started to investigate the impact of environmental factors on the cycling behavior of BSS users [32,33,34,35,36,37,38,39,40]. For instance, some studies uncover that proximity to workplace or home tends to increase the usage of BSS [33,34,35], and high population and high levels of public transit accessibility also tend to increase the usage of BSS [36,37,38]. More importantly, improvement on bicycle facilities (bicycle lanes or bicycle paths) seems to increase bicycle sharing ridership [36,37,39,40]. Potentially, a better understanding of environmental effects on the cycling behavior of BSS riders could offer suggestions for policymaking and urban planning. For instance, knowing how environmental factors influence the cycling behavior of BSS riders will help in finding optimum places for docking stations across a city [32].
Although earlier studies have examined the effects of safety and convenience on the cycling behavior of regular riders [26,27,28,29], they have rarely explored the effects of safety and convenience on the cycling behavior of BSS riders. Therefore, in this study, we aimed to investigate how road safety, convenience, and public safety affect the cycling behavior of BSS riders by controlling for other environmental factors. Specifically, we used traffic accidents, congestions, and violent crimes to measure road safety, convenience, and public safety, respectively. Additionally, to more accurately measure public transit accessibility, road safety, convenience, and public safety, we used spatiotemporally varying measurements instead of spatially varying measurements that have been widely used in earlier studies [32,37,41]. We also examined how space- and time-dependent public transit accessibility influences the usage of BSS, since earlier studies employed space-dependent public transit accessibility without any information on transit frequency [36,37,38].
Specifically, in this study, we investigated the impacts of environmental factors on the usage of BSS. The environmental factors investigated in this study include socioeconomic factors, land use and point-of-interest (POI) factors, road infrastructure factors, public transit accessibility factors, and safety and convenience factors. Particularly, we attempted to answer the questions of: (1) how traffic accidents and congestion influence the usage of BSS; (2) how violent crime influences the usage of BSS; and (3) how public transit accessibility influences the usage of BSS. Moreover, we tried to offer implications for policies aiming to increase the usage of BSS or for the site selection of new docking stations. Particularly, we paid much attention to the necessity of reducing violent crime. We conducted an empirical investigation in Chicago with cycling data from a BSS called Divvy. Divvy publicizes cycling trips of BSS users (including both annual members and casual users) with start and end docking stations as well as trip duration. The BSS data was contributed by individual riders, and thus is considered a type of crowdsourced geographic information (CGI) and has high potential for studies of active travel and sustainable transport.
The remainder of this paper is organized as follows. Section 2 introduces the BSS data and environmental data, as well as the measures of environmental characteristics. Section 3 then describes the empirical results, and finally Section 4 presents the conclusion and makes recommendations for future work.

(1)
We first removed trips with a duration of more than 90 min (twice the average duration of regular riders’ trips in Chicago [43]), as trips longer than 90 min are not typical bicycle-sharing rides and could also be a result of misplacing the bicycle when returning it to the station [41];
(2)
We further removed trips originating or arriving at a docking station with a unique ID of ‘394’, as this docking station is missing in the Stations file and thus its geo-location is unknown.

In this study, we took account of environmental factors, including socioeconomic factors, land use and point-of-interest (POI) factors, road infrastructure factors, public transit accessibility factors, and safety and convenience factors. Accordingly, data of residents and jobs were used to measure socioeconomic factors; land use data and data of POIs were used to measure land use and point-of-interest (POI) factors; data of road networks and bicycle lanes were used to measure road infrastructure factors; data of public transit services was used to measure public transit accessibility factors; and finally data of traffic accidents and congestion and data of violent crimes were used to measure safety and convenience factors.
Specifically, data of residents and jobs were downloaded from US Census Bureau’s Longitudinal Employer Household Dynamics (LEHD) synthetic data [44]. Data of road network, data of bicycle lanes, data of public transit services, and crime data were downloaded from Chicago’s open data portal [45]; while land use data were downloaded from Chicago Metropolitan Agency for Planning [46]. Data of POIs were downloaded from MapQuest via APIs [47]. Data of traffic accidents and congestion were downloaded from Bing Maps REST Services via APIs [48]. One-year records of geo-referenced and time-stamped traffic accidents and congestions from June 2015 to May 2016 were collected since June 2015. As Bing Maps REST Services do not support downloading historical records, we do not have records before June 2015. Instead, we used records from June 2015 to May 2016 to represent traffic accidents and congestions in this study. A three-year dataset of geo-referenced and time-stamped violent crimes from 2013 to 2015 was used to represent violent crimes. The geographical levels of population and employment were obtained from census tracts. The population and employment data in 2014 were used, as they were the most updated. Also, we used the latest land use data generated based on aerial images from 2013. The public transit data were obtained from a General Transit Feed Specification (GTFS) dataset that was downloaded from the Chicago Transit Authority (CTA) system, including stops, route patterns, and a full service schedule. The geography level and temporal level of traffic and crime data were street level and second level.

In this study, we focused on the cycling behavior of annual members rather than casual riders because: (1) annual members tend to use BSS much more frequently than casual riders; and (2) 70% of the cycling trips were made by annual members. Accordingly, we first partitioned the cycling trips into trips made by annual members and trips made by casual riders, and then counted the cycling trips of annual members departing from or arriving at each docking station during a one-hour time slot separately. To characterize the cycling behavior of BSS riders (annual members), we measured the usage of docking stations as an origin or destination by two indices: hourly number of departures and hourly number of arrivals. A docking station’s hourly number of departures and hourly number of arrivals represent the total number of cycling trips from and to this station during a one-hour time slot (e.g., 7:00 a.m.–7:59 a.m.) on all workdays in 2015. Specifically, dependent variables are hourly number of departures and hourly number of arrivals. In this study, we investigated the impact of environmental factors on one of these two dependent variables each time. Consequently, there are 11,376 records (24 h × 474 stations) of each dependent variable.
To quantitatively examine the effects of environmental factors with different data types (numeric and categorical), a linear mixed-effects model (also called a linear mixed model) was employed in this study. Moreover, a multilevel linear mixed model was employed to explicitly recognize the dependencies associated with bicycle flows originating or arriving at the same station, as a traditional linear regression model is not appropriate for studying data with multiple repeated observations [37]. Additionally, an earlier study [37] compared a linear regression model and a linear mixed model, and its experimental results demonstrated the suitability of the mixed modeling approach employed in an analysis for examining the determinants of BSS usage.
The general form of a linear mixed model is: where y is an N × 1 response vector of the outflows or inflows of docking stations; N is the number of observations (24 h × 474 stations); X is an N × p matrix of the p independent variables for the fixed-effects; β is an N × 1 fixed-effects vector; Z is an N × q matrix for the q random-effects; γ is a q × 1 random-effects vector; ε is an N × 1 vector of the residuals.
For simplicity, we only considered random intercepts in this study. Accordingly, we assume that: apart from the capacity and visibly environmental factors of the docking stations, some other invisibly environmental factors of the docking stations, e.g., building density, steep inclines, or the presence of tourism sites nearby, might influence cyclists’ behavior in a way that is not seen in the present data. In this study, the number of groups is equal to the number of docking stations.

3.2. Discussion and Implications for Policies

There are some limitations to this study. First, as how often each member uses BSS is unknown, we were not able to access the annual or monthly average frequency of BSS usage at the individual level. Ideally, individual-level frequency of BSS usage would be known, and we thus would be able to investigate the environmental effects on the cycling behavior of BSS riders at an individual level. Second, the cycling purpose of BSS usage is unknown. Ideally, the cycling purpose of members’ BSS usage would be known, and we thus could examine how BSSs increase commuting and recreational cycling, respectively.

In future research, some aspects should be considered for further study. First, route choice modelling could be used to infer the explicit cycling paths based on road networks and cyclists’ preferences [22]. Second, to understand how BSS usage may increase with the number of docking stations and operating years, we could explore the monthly variations of BSS usage from 2013 to 2017, as Divvy offers data for several different years. Third, comparing the cycling behavior of BSS riders and private bicycle riders is also interesting. Traffic count data [50] or crowdsourced data from online social networking websites for sports, such as Strava [51,52], could be used as cycling data for private bicycle riders.

This work is supported by the UK Economic and Social Research Council (Grant No. ES/L011921/1). The authors would like to express gratitude to the anonymous referees for their helpful comments and thank Marta Nicholson at Urban Big Data Centre University of Glasgow for proof reading this article. 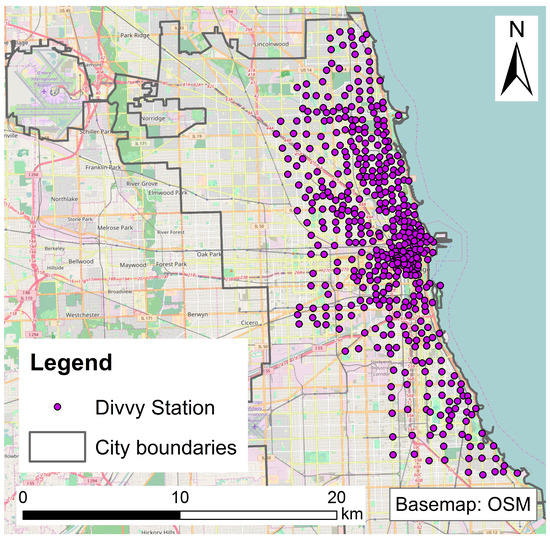