Are Consumers Willing to Pay More for a “Made in” Product? An Empirical Investigation on “Made in Italy”
Previous Article in Journal

Measuring the Spatial Dimension of Automobile Ownership and Its Associations with Household Characteristics and Land Use Patterns: A Case Study in Three Counties, South Florida (USA)

A Study on Applying Biomass Fraction for Greenhouse Gases Emission Estimation of a Sewage Sludge Incinerator in Korea: A Case Study

2.3. Analysis of the Biomass Fraction

Official test methods related to biomass fraction analysis include ASTM D 6866, DS/CEN/TS 15440, and CEN/TR 15591. The official test methods include 14C methods, Selective Dissolution Methods, and Balance Methods. In addition, many related studies use other relevant methodologies to analyze biomass fractions [19,20,21,22,23,24].
In the present study, the 14C method was used to calculate the biomass fractions of sewage sludge and sewage sludge incineration exhaust gases. According to the official test methods, 14C methods include LSC (Liquid Scintillation Counter), AMS (Accelerator Mass Spectrometer), and IRMS (Isotope Ratio Mass Spectrometer). In the present study, the application of ASTM-D6866 and AMS analysis method was used. The AMS method enables the analysis of tiny quantities (1 g) and has a precision that is 105 times higher than the general mass analysis devices [25].
The AMS analysis is suitable for the carbon dating of small samples as it allows the number of atoms of different isotopes of carbon to be counted directly, instead of their ratio having to be inferred from the (very low) level of radioactivity of the sample.
The application of ASTM-D6866 to derive a “Biogenic carbon content (biomass fraction)” is built on the same concepts as radiocarbon dating, but without use of the age equations. It is done by deriving a ratio of the amount of radiocarbon (14C) in an unknown sample to that of a modern reference standard. The modern reference standard used in radiocarbon dating is a NIST (National Institute of Standards and Technology) standard with a known radiocarbon content equivalent approximately to the year AD 1950. AD 1950 was chosen since it represented a time prior to thermo-nuclear weapons testing which introduced large amounts of excess radiocarbon into the atmosphere with each explosion (termed “bomb carbon”). This was a logical point in time to use as a reference for archaeologists and geologists. Therefore, 1950 is used as the reference year in accordance with “fractions of modern carbon (FM)” as below and biomass fractions are calculated by comparing the ratios of radioactive carbon isotopes 14C/12C existing in the standard sample and the analysis sample.
fM,Sample is the promptly measured parameter; however, the fraction of biogenic or fossil carbon (%Bio C (biomass fraction), %Fos C (fossil carbon fraction)) has more substantive relevance.
Since 14C in fossil matter is completely decayed, the content of biogenic carbon (%Bio C) is directly proportional to the 14C fraction in the emitted CO2. 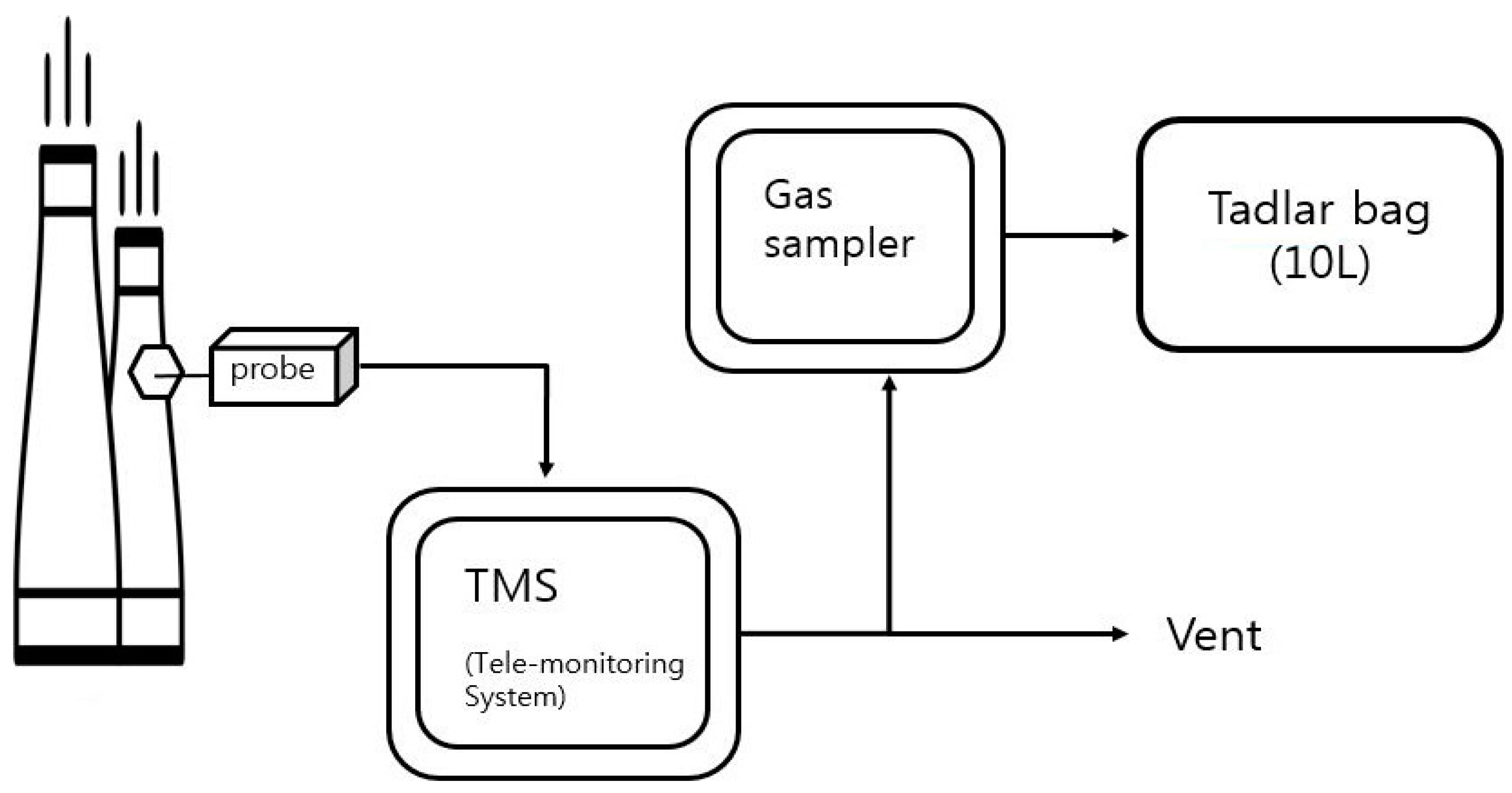 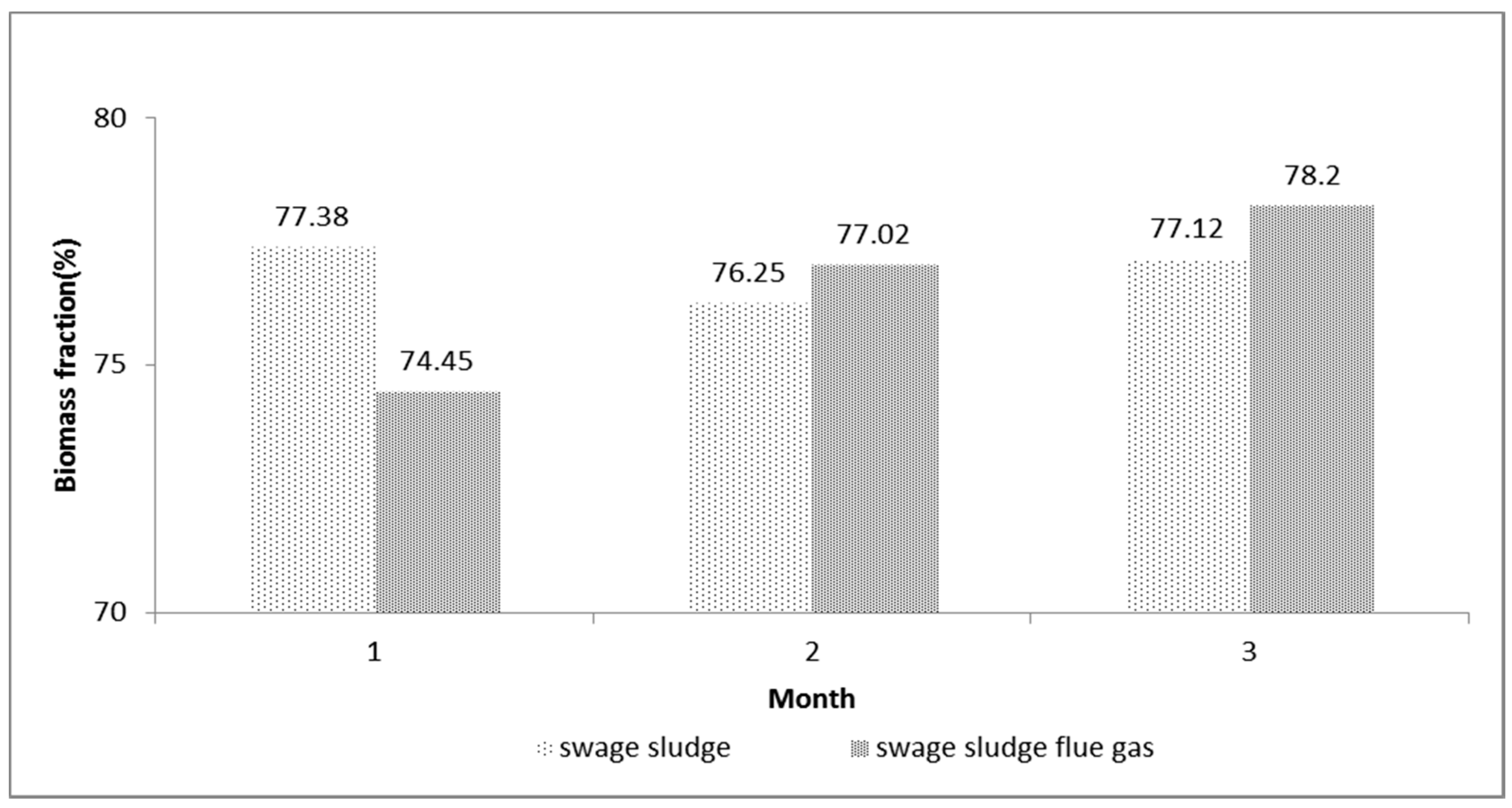