A Feasibility Assessment of Photovoltaic Power Systems in Ireland; a Case Study for the Dublin Region

Photovoltaic (PV) power generation is one of the cleanest sources for producing renewable energy; however uptake on the Irish renewable energy market to date has been low. There is a lack of support for solar PV systems in Ireland; there is currently no solar PV energy feed-in-tariff as there are for other renewable energy systems in Ireland. Despite the current lack of support, the Government has indicated that support for the uptake of solar PV installations will be provided through the provision of a feed-in tariff in the future. The aim of this study was to determine the feasibility of installing PV systems under Irish climatic conditions at a location based in Dublin, Ireland, from a technical, environmental and economic point of view. This was achieved by carrying out a life cycle assessment of potential environmental impacts, and analysis of energy and economic payback times relating to the proposed PV system. Four possible renewable feed-in-tariffs (based on existing feed-in-tariffs for other renewable energy systems) were considered to determine the effect of such tariffs on the overall economics of the proposed PV system. Results show that life cycle GHG emissions are 69 g CO2-eq per kWh generated by the system, significantly lower than the current electricity grid mix emissions of 469 g CO2-eq per kWh. It will take 5.23 years of operation of the solar plant to generate the same amount of energy (in terms of primary energy equivalent) that was used to produce the system itself. The economic payback time varies from 19.3 and 34.4 years depending on the rate of renewable energy feed-in-tariff applied. The costs for the production of PV electricity in this study are higher than is usual in countries where the solar PV market is more developed, e.g., Germany, due to constraints with building integration and lack of experienced PV installers. As more PV is deployed, the Irish PV installer base will increase and ‘learning by doing’ effects will allow installers to install projects more efficiently and quickly under Irish conditions, leading to significantly reduced costs. View Full-Text
Keywords: solar PV; Ireland; greenhouse gas emissions; economic payback time; energy payback time; feasibility solar PV; Ireland; greenhouse gas emissions; economic payback time; energy payback time; feasibility
►▼ Show Figures 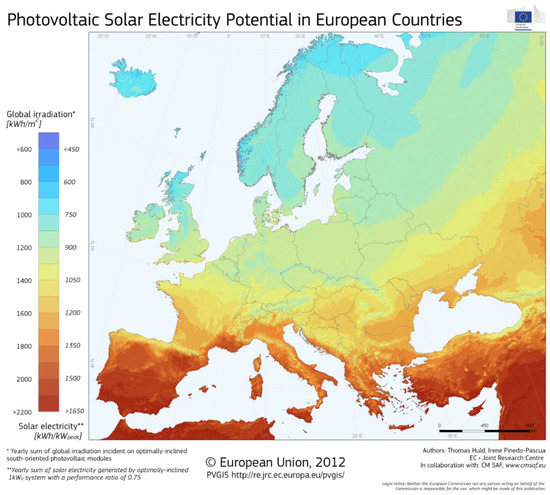