Particulate matter (PM) is implicated in severely negative health effects, and subway-system PM is potentially more genotoxic than several other particle types. However, there are insufficient studies on subway-system PM-pollution reduction and control and the potential economic benefits thereof. Thus, the present study undertakes to assess the potential economic benefits resulting from a 10 μg/m3 reduction in PM10 and PM2.5 concentrations in a subway system, and to evaluate the importance of prevention and management of PM generally and subway-system PM specifically. Socioeconomic benefits such as medical expense curtailment, the precautionary effect on premature death, and the precautionary effect on productivity loss among subway passengers and workers were estimated by the cost-of-illness (COI) method. The health endpoints included two categories of disease: all lung cancer and cardiovascular diseases. The results showed that the total annual economic value in cost savings was 328.2 million KRW: 124.2 million KRW in direct costs, 186.4 million KRW in premature mortality costs, and 17.6 million KRW in productivity loss costs, respectively. These findings suggest that the control of PM10 and PM2.5 levels in subway systems should be promoted, as such effort certainly can produce significant economic benefits. View Full-Text
Keywords: economic analysis; particulate matter; subway; economic assessment economic analysis; particulate matter; subway; economic assessment
►▼ Show Figures 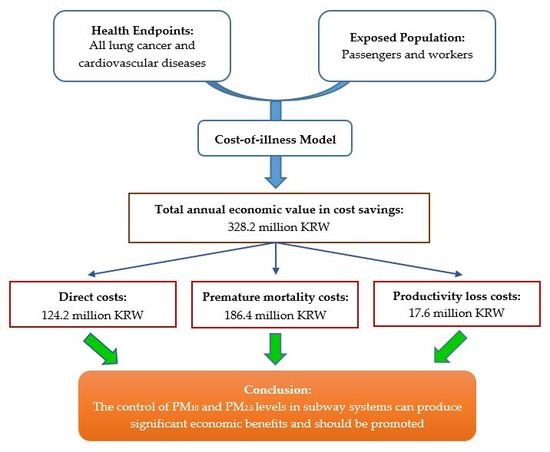