For the evaluation of changes in the carbon stock of living biomass, two methods are reported in the Good Practice Guidance for Land Use, Land-Use Change, and Forestry: (1) the default method, which requires the biomass carbon loss to be subtracted from the biomass carbon increment for the reporting year; and (2) the stock change method, which requires two consecutive biomass carbon stock inventories for a given forest area at two points in time. We used three methods to estimate above-ground biomass: (1) application of allometric equations, (2) constant BEF (biomass expansion factor), and (3) age-dependent BEF, following which we evaluated the changes in carbon stock and the related uncertainty. Our study was carried out in a Douglas fir plantation composed of plots with three different planting densities, monitored at three different ages (15, 25, and 40 years old). Results showed the highest uncertainty in the estimates based on the constant BEF, whereas the use of allometric equations led to the lowest uncertainty in the estimates. With a constant BEF, it is usually difficult to obtain a reliable value for the whole tree biomass because stem proportion increases with tree size at the expense of the other components. The age-dependent BEFs aim to reduce the bias representing the actual change in stock, thus we found a lower uncertainty in the estimates by using this method compared to the constant BEF. The default method had the highest uncertainty (35.5–48.1%) and gave an estimate higher by almost double compared to the stock change method, which had an uncertainty ranging from 2.9% (estimated by the allometric equation) to 3.4% (estimated by the constant BEF). View Full-Text
Keywords: carbon stock; uncertainty; Douglas fir; allometric equation; BEF carbon stock; uncertainty; Douglas fir; allometric equation; BEF
►▼ Show Figures 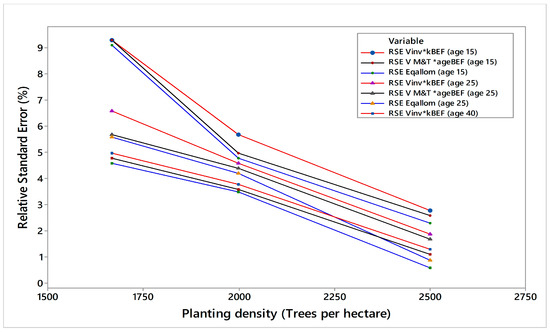