There has been increasing interest among business and entrepreneurship researchers in the concept of time perspective [46,47,48]. These scholars are interested to know how the differences in time perspective can influence the individual behavior and the strategic decisions that are made at the firm level [48,49,50,51]. According to [50], there are two distinct groups of people in regard to time perspective: immediate-oriented people (with short-term perspective) and future-oriented people (with long-term perspective). Individuals high in immediate orientation focus on the here and now rather than on the future [52]. They attach a high importance to the immediate consequences of their decision and behavior [53]. On the contrary, future orientation refers “to the extent to which individuals consider the potential distant outcomes of their current behaviors and the extent to which they are influenced by these potential outcomes” [50] (p. 559).
It is well known that sustainability-oriented actions (e.g., fair-trade agreements, following ISO 14001 environmental management standards, promoting democratic business models, preventing environmental pollution during the production process, or having eco-labeled products) have mostly long-term horizons [32]. Moreover, such actions usually do not show immediate impacts on the business performance [33]. It is almost clear that paying less attention to sustainability-oriented actions at the firm level [9] eventually will lead to a gradual environmental degradation that will hurt the whole society in the future. Previous studies found that future-oriented individuals, in general, show a greater level of sustainable [53] and responsible ecological behavior [54] because of their long-term outlook. They usually have greater attitudes toward environmental protection in general [55,56]. Although these results are promising, the major problem of these studies is that they are mostly based on research with university student samples. Hence, it seems to be difficult to generalize these results in an entrepreneurship context. In addition, immediate orientation as another dimension of time perspective has not received enough attention by these studies.
A firm that was established by a highly immediate-oriented entrepreneur, most probably focuses on strategic actions with immediate outcomes. Having a long-term outlook is a prerequisite for involving sustainability-oriented actions. Sustainability may not be the business priority for immediate-oriented entrepreneurs, since they focus on the current perspective [48]. They prefer to maximize the present profit, and they are less concerned about the potential harm and future risk of their actions in a given moment on the community and environment [57]. For example, adopting ISO 14001 may help firms to manage their environmental performance more efficiently, and to reduce waste and pollution on the long term [58]. However, the costs of attaining ISO 14001 is rather high [59] without having equal [60] and immediate perceived financial benefits for all the ISO 14001-certified firms [61]. Therefore, it is less likely that entrepreneurs, who emphasize the short-term goal of immediate profitability, implement an environmental management system.
Hence, we predict in the second hypothesis that entrepreneurs behave differently according to their time perspective. Particularly, those firms founded by highly future-oriented entrepreneurs may exhibit more sustainability-oriented actions than firms established by immediate-oriented entrepreneurs.
Hypothesis 2: Newly established firms by highly future-oriented entrepreneurs, in comparison with firms founded by highly immediate-oriented entrepreneurs, show more sustainability-oriented entrepreneurial actions.

According to [74], most survey-based upper-echelon studies have typically suffered from relatively small sample sizes, lacking temporal precedence, and having single informants. To overcome these limitations, we surveyed a large sample of entrepreneurs (352) at two different points in time by using two informants from each firm. In the first round of data collection, we sent a questionnaire to entrepreneurs measuring their values, belief and orientation. Six months later, we surveyed one of the senior executives for the dependent variable, which is the firms’ sustainability-oriented entrepreneurial action.
The sample of our study is coming from two countries, Iran and Bangladesh, including entrepreneurs drawn from the membership directory of the Association of Small and Medium Enterprises [75]. For inclusion in the sample selection, the firms had to be owned and managed by the founders, who had to employ fewer than 50 employees. Moreover, the firm was not allowed to have more than eight years in operation. For having a homogeneous sample of entrepreneurs, these criteria are essential [76]. This approach has also been extensively used by several researchers in an entrepreneurship context [76,77,78,79,80].
The selected countries, Iran and Bangladesh, offer an interesting context for studying the firms’ sustainability-oriented entrepreneurial actions. According to the environmental performance index of 2017, Iran ranked 83 out of 178 while Bangladesh ranked 169. According to the Iranian official statistics, 40 hectares of forests are destroyed yearly and the consumption of energy in the country is almost fivefold more than the world average. Conservation of the environment in Bangladesh is also in the early stage; recently policymakers encouraged companies to focus on less pollution and more environmentally sustainable activities [81]. In this regard, the Bangladesh Environment Conservation Act (BECA) was enacted recently for obtaining three important objectives: first, conservation of environment, second, the control and mitigation of environmental pollution and finally improvement of environmental standards [82].
We included a broad group of newly established firms from these two Asian countries to enhance the generalizability of the findings. In both countries, we used locally trained research assistants to collect the data; this also enhanced our chance to receive more reliable data from respondents. To secure accuracy, we used the double-back-translation method to translate the original survey to local languages in Iran and Bangladesh [75,80,83]. The questionnaire was first translated into the local language independently by two business professors in each country. Then we asked a bilingual expert for back-translation. After that, we had a meeting with all three experts to modify any ambiguous words. In addition, to assess the informants’ understanding of the survey questions and improve the face validity of the instrument, we pre-tested the measurement items among 10 entrepreneurs (not included in the main sample) in each country. To enhance the clarity of questions, we asked the respondents to review the items carefully. Any confusing words had been revised before handing out the questionnaires.
Moreover, in order to control environmental biases due to the exposure to different sets of norms, rules and regulations [84], we included newly established firms localized in almost the same region in both countries. Questionnaires were sent to the founders of 504 newly established firms in Iran (South of Iran, with the majority located in the province of Kerman, Yazd, Fars, Bushehr, Khuzestan and Hormozgan) and 476 newly established firms in Bangladesh (the list of newly established firms collected from Narsingdi Chamber of Commerce & Industry). We sent the questionnaires to those entrepreneurs who agreed to participate in our study. We ensured anonymity and confidentiality of the study to the respondents, and asked them to answer the questions as honestly as possible. Responses with high amounts of missing data were removed from the final sample. After two rounds of data collection, a total of 177 completed responses from Iranian firms and 175 completed responses from Bangladeshi firms (two responses from each firm) were achieved, yielding response rates of 35 percent and 37 percent, respectively (total 36 percent).
In total, the average age of the entrepreneurs was 33.90 (S.D. = 7.19). Among respondents, 40 percent hold a high school diploma, 27 percent hold a bachelor’s degree and 15 percent had a master’s degree. The majority of them are male (66.5 percent). Concerning religious affiliation, 65.4 percent of respondents are Muslim, 14.3 percent are Hindus, 7.1 percent are Buddhists, 5.1 percent are Christians and 8.1 percent belong to other religions. The average firm’s age was 4.56 years (S.D. = 1.74). The average number of employees was 21.17 (S.D. = 9.488). Furthermore, these 352 firms represented 48 four-digit Standard Industrial Classification (SIC) codes [85]. In total, eight different industries were involved in the survey: Services (33.4%); Manufacturing (22.9%); Agriculture, Forestry, Fishing (20%); Construction (8.3%); Transportation, Communications & Public Utilities (5.1%); Retail Trade (4.3%); Finance, Insurance, and Real Estate (3.4%); as well as Wholesale Trade (2.6%).

Sustainability orientation, in general, refers to the underlying attitudes towards environmental protection and social responsibility [86]. According to [9], sustainability-oriented entrepreneurial actions are linked to the extent to which entrepreneurs aim to solve sustainability problems by setting up immediate objectives while developing their ventures. To reveal the degree to which firms engage in sustainability-oriented entrepreneurial actions, we adopted eight items from [9] with minor modification. All eight items were scored on a 5-point Likert-type scale ranging from 1 (´strongly disagree´) to 5 (´strongly agree´). The Alpha coefficient for this scale was 0.94.

Future orientation refers “to the extent to which individuals consider the potential distant outcomes of their current behaviors and the extent to which they are influenced by these potential outcomes” [50] (p. 743). We measured future orientation using the five-item scale from [50]. The response options for these items ranged from “strongly disagree” (1) to “strongly agree” (5). The Cronbach’s alpha coefficient was 0.94.

Belief in a just world [21] refers to having this idea that we are living in a fair world where everybody gets what he or she deserves in the long run. We adopted seven items from [87] to measure entrepreneurs belief in a just world. The response options for these items ranged from “strongly disagree” (1) to “strongly agree” (7). The Cronbach’s alpha coefficient was 0.94.

4.7. Belief in an Unjust World

Beliefs in an unjust world are characterized by “cognitions that rationalize the fact that people often get what they do not deserve or do not get what they do deserve” [22] (p. 126). We measured belief in an unjust world using the seven items from [63]. The response options for these items ranged from “strongly disagree” (1) to “strongly agree” (7). The Cronbach’s alpha coefficient was 0.957. The Appendix A provides the wording of the items for all dependent and independent variables.

To ensure the robustness of our results, we controlled 12 variables on the individual and firm level. By following previous studies in this context [33,86,88], on the individual level, we controlled for respondent’s age, gender [77], education (1 = Primary school; 2 = Elementary school; 3 = High school; 4 = Undergraduate; 5 = Master’s; 6 = Doctorate), previous management, marketing and technology experience [89], and religion (1 = Muslim, 2 = Hinduist, 3 = Buddhist, 4 = Christian and 5 = other) [90].
On the firm level, we controlled the firm size (number of employees) and, firm age (number of years since the firm’s foundation). We compared the objective data drawn from the governmental database with subjective data on the firm age and size from 121 Iranian and 105 Bangladeshi firms respectively. The significant correlations between archival data and subjective measures for firm age (r = 0.85, p < 0.001) and firm size (r = 0.89, p < 0.001) were found which support the validity of the reported measures. In addition, we controlled the organizational available slack resources [91] which influence organizational strategic responses to a given issue [92]. We controlled the impact of the industry affiliation on firms’ sustainability-oriented entrepreneurial actions, because entrepreneurs are usually influenced by the norms and standards of their professional environment [93,94]. Finally, we controlled the level of environmental changes and dynamism, by using three items from [95].

7. Limitations and Directions for Future Research

We sincerely thank and acknowledge the valuable time and cooperation given by Khaled Nawaser throughout the data collection process, without his help, collection of data from various SMEs wouldn’t have been possible. We acknowledge support by Deutsche Forschungsgemeinschaft and Friedrich-Alexander-Universität Erlangen-Nürnberg (FAU) within the funding programme Open Access Publishing. 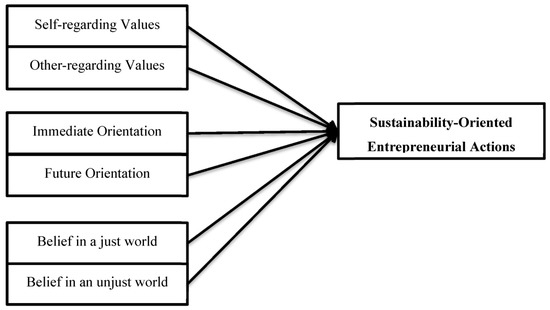