Costs, Benefits and Challenges of Sustainable Livestock Intensification in a Major Deforestation Frontier in the Brazilian Amazon
Next Article in Special Issue

Camelina (Camelina sativa L.) is an oilseed with potential for use as a raw material in second-generation biofuels. Camelina has a seed yield of up to 2380 kg·ha−1 and contains around 45% fatty acids. Selection of a suitable site is critical for production optimization. The objective of this study was to determine Chilean agro-climatic suitability for establishing camelina as a productive alternative. Climate and soil requirements and geographical restraints were evaluated for the species, considering the climatological characteristics of its regions of origin, as well as regions where camelina is successfully grown in the rest of the world. The variables considered included factors (maximum temperatures of the warmest month, water deficits, and degree days) and limitations (altitude, geomorphology, and current land use), which permitted the evaluation of the national territory for a certain level of suitability. It was determined that 1.3% of the national territory (960,664 ha) has some degree of suitability for camelina adoption. Between the Biobío and Los Lagos regions, 49.0% of the land (471,203 ha) is in the category of no thermic restrictions, with mild water restrictions, and mild soil restrictions or without information, which can be used for camelina production. The Los Ríos region has 21.4% surface area (321,176 ha) with some level of suitability for camelina, the most suitable region to establish this crop in Chile. This research has provided valuable information applicable to new species and geographic areas which facilitate the adaptation of agricultural and forestry production to global changes. View Full-Text
Keywords: bioenergy; Camelina sativa; energy crops; agro-climatic suitability; biodiesel bioenergy; Camelina sativa; energy crops; agro-climatic suitability; biodiesel
►▼ Show Figures 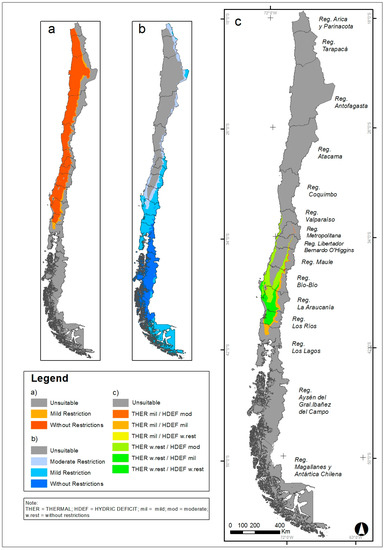