For the study mentioned above, first, the subjects of analysis were selected among patents in the patent database available in the United States Patent and Trademark Office (USPTO). We use patents data to analyze open innovation objectively even though this approach can have limits in comparing with control group. Among the patents that belong to H03 and H04 under the International Patent Classification (IPC) of the World Intellectual Property Organization (WIPO), those that were applied for between 2000 and 2011 were set as the subjects of analysis. The number of patents included in the analysis was 340,119, and the number of applicants that participated in the patents was 5449. Among them, the top 500 patent applicants and Samsung, Apple, Nokia, and Research In Motion were set as the subjects of intensive analysis. The subjects of patent analysis were selected to examine the area of core technologies for smartphones that are currently leading the second IT revolution throughout the world. For in-depth analysis beyond quantitative analysis, the top 500 firms were selected. In addition, those firms that were ranked first and second in smartphone market shares worldwide as of January 2014 and those firms that were ranked first and second in the drop of market shares over the last three years were chosen as the subjects of individual in-depth analyses.

The absence of a tie between an actor and the third party is known as a structural hole, which may be exploited by the ego [107]. This study measured structural holes as a constraint using the network constraint by Pajek 3.10 [70,81] and used the ratio of nonredundant contacts to total contacts for the ith firm to measure the structural holes in the ego network of a firm. This is expressed as [67,70,110,111]: where is the proportion of i’s relations invested in the connection with contact q, is the marginal strength of the relationship between contact j and contact q, and is the total number of contacts for firm i. This study measured structural holes using the following formula.

This study measured closure using Pajek 3.10 as follows [112]:
This was originally used as a clustering coefficient for a single vertex. However, according to the original concept of closure, this formula can be used for the said purpose [80,84,113].

3.2.3. Independent Variables Regarding the Number of Joint Patents

Collaboration in the patent application stage corresponds to the first part of the knowledge funnel for open innovation. In this study, the level of collaboration in this early stage will be measured through ROI and IOI, as shown in Table 3 [17,30,114,115].

In Figure 4, the total number of nodes that constitute the total network—that is, the number of patent applicants—is 5444. The number of components constituted by these nodes is 299. Among the components, the largest one consists of 2970 nodes, the second largest one consists of 659 nodes, and the third largest one consists of 244 nodes. The 2970 nodes of the largest component are mostly individuals, and the 659 nodes of the second largest component are mostly firms. As such, 2970 is not individual-type assignees in patents data, but the number of individual applicants among the total of 5444 applicants. Node sizes on the network show the numbers of patent applications made, which are diverse, ranging from 1 to 12,907.
In Figure 4 and Figure 5, the 500 largest firms are shown in blue. As seen in Figure 5, few of the 500 largest firms are located in the giant component. It is inferred that they are located in the 2nd component, and some of them are located in the 3rd component. Therefore, Hypothesis 1-2-1 was dismissed. Thus, it cannot be confirmed that only the power law is valid in joint patent application networks. On the contrary, it can be inferred that a long tail phenomenon appears in which not only the patent application activities of some huge firms, but also those of various firms and individuals, coexist [119,120].
Next, to review the 500 largest firms, 562 nodes—as an approximate value—were examined. These nodes constituted a total of 272 components. The largest component consisted of 124 nodes (22.06%), and the second largest component consisted of 36 nodes. Note that 234 firms or 41.6% of all nodes had no network with the firms included in the 500 largest firms. Therefore, Hypothesis 1-2-2 was dismissed. In Figure 6, different circles represent different components. It can be seen that differing forms of collaboration appear among the 500 largest firms. While 124 firms centering on Samsung actively collaborate with each other in the research and development stage, 234 firms that exist around the former firms in the form of points show a phenomenon extremely contrary to the foregoing by having no cooperation with any firms included in the 500 largest firms at all.
These 500 largest firms applied for a minimum of 50 patents and a maximum of 12,907 patents, which indicate that substantial differences exist in their research and development activities. Therefore, drastic differences in collaboration can be inferred to be relevant to the differences in research and development activities.
When the four firms are divided into two groups based on degree centrality, as shown in Table 4, among the characteristics of their joint patent application networks using the analytic hierarchy process (AHP) method, Apple and Research In Motion, with small numbers of joint patent applications, are classified into a group and Samsung and Nokia, with relatively large numbers of joint patent applications, are classified into another group. Therefore, Hypothesis 1-2-3 is dismissed. Apple has made no joint patent applications with the 500 largest firms or in any of its networks. This is because Apple rarely cooperates with other companies in the research and development stage; therefore, it rarely performs open innovation in the research and development stage. This is contrary to Apple’s open innovation in the production stage because Apple performed a total of 54 cases of open innovation through the acquisition of firms in the production stage by implementing mergers and acquisitions (M&A) with various companies ranging from Network Innovations in 1988 to SnappyLabs in January 2014 [34]. As shown in Appendix A, Samsung has applied for joint patents not only with the companies included in the 500 largest firms but also with various other firms in its entire networks, thereby showing a very active open innovation in the research and development stage. Samsung, unlike Apple, has implemented approximately six cases of M&A-type open innovation [34]. As shown in Appendix B, Nokia has applied for a limited number of joint patents at a limited level with four firms included in the 500 largest firms and seven firms in its entire networks. On the other hand, similar to Apple, Nokia has very actively implemented M&A to the extent that it implemented 47 cases of M&A with various firms in contrast with its joint patent application [34]. Lastly, Research In Motion has not applied for any joint patent with any of the 500 largest firms, but it has applied for joint patents with a limited number of firms and individuals in its entire networks, as shown in Appendix C.

This study analyzed data on patent applications by all firms in the USA that applied for patents at a certain period in a certain area. Thus, we have manifest limits in this research, and we need to perform the following research.
In-depth case analyses are required as follow-up studies to examine the reality of open innovation in the process of joint patent applications that center on concrete cases of firms, concrete shapes of resultant firms’ innovation performance, and related expenses. For a case study, a control group should be analyzed to understand the pure effects of open innovation structure.
These follow-up studies should identify the concrete forms and characteristics of collaboration at the entrance of the knowledge funnel, network structures in this process, the direct relationship between the network structures and firms’ performance, as well as the effects of the network structures on firms’ collaborative activities. Especially, we should find any special benefits and cost of open innovation in research steps compared to development, partnership in business, or M&A to find the strange aspects of open innovation of R&D, except joint patent application [102], through an intensive case study on the open innovation at the entrance of knowledge funnel.

This work was supported by the Daegu Gyeongbuk Institute of Science and Technology Research and Development Program of the Ministry of Science, ICT & Future Planning of Korea (16-IT).

Table A1. Samsung Network in the 500 Largest Agents.

Table B1. Nokia Network in the 500 Largest Firms and Total Networks. 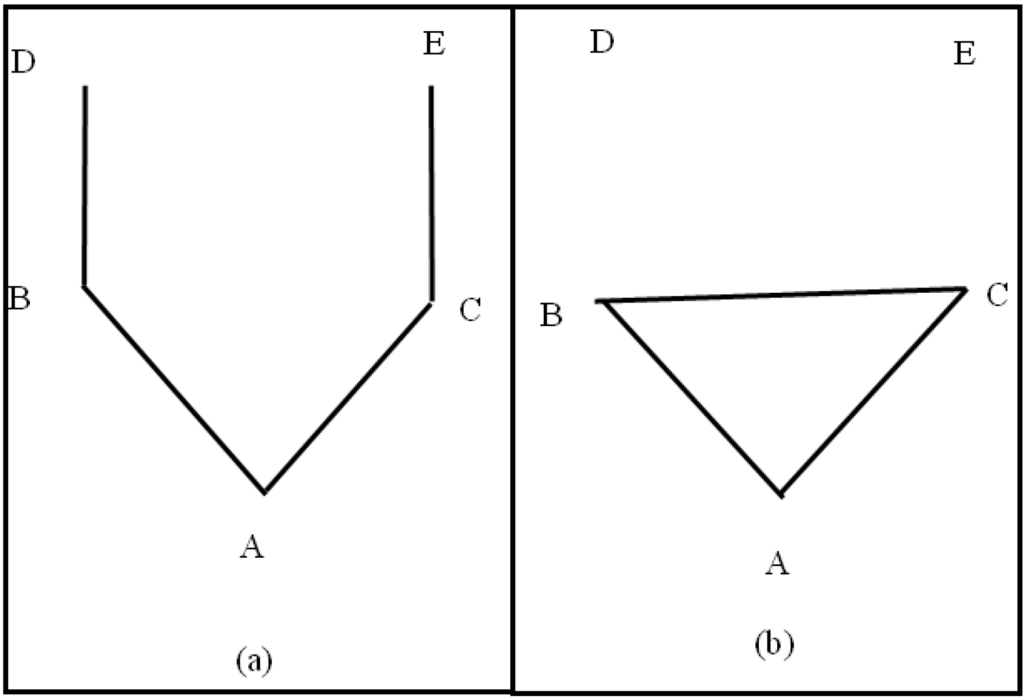 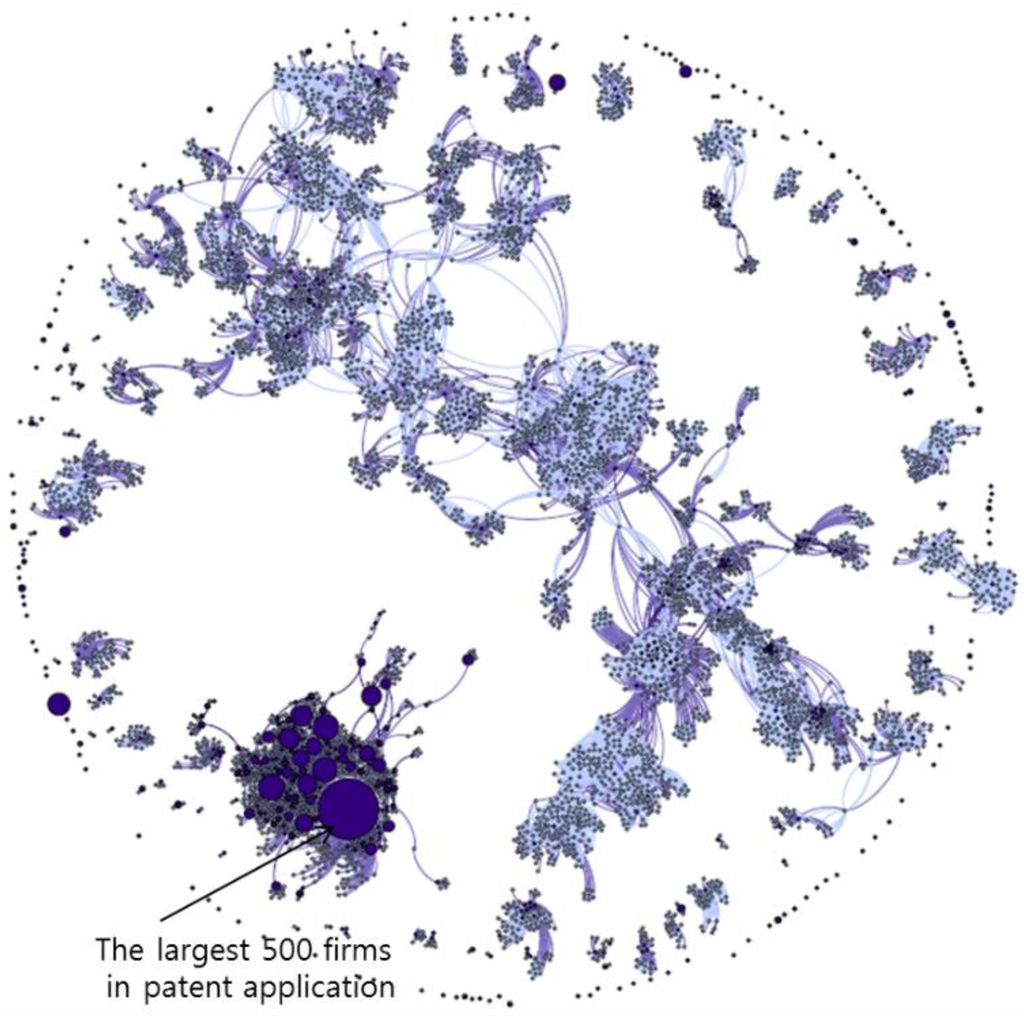 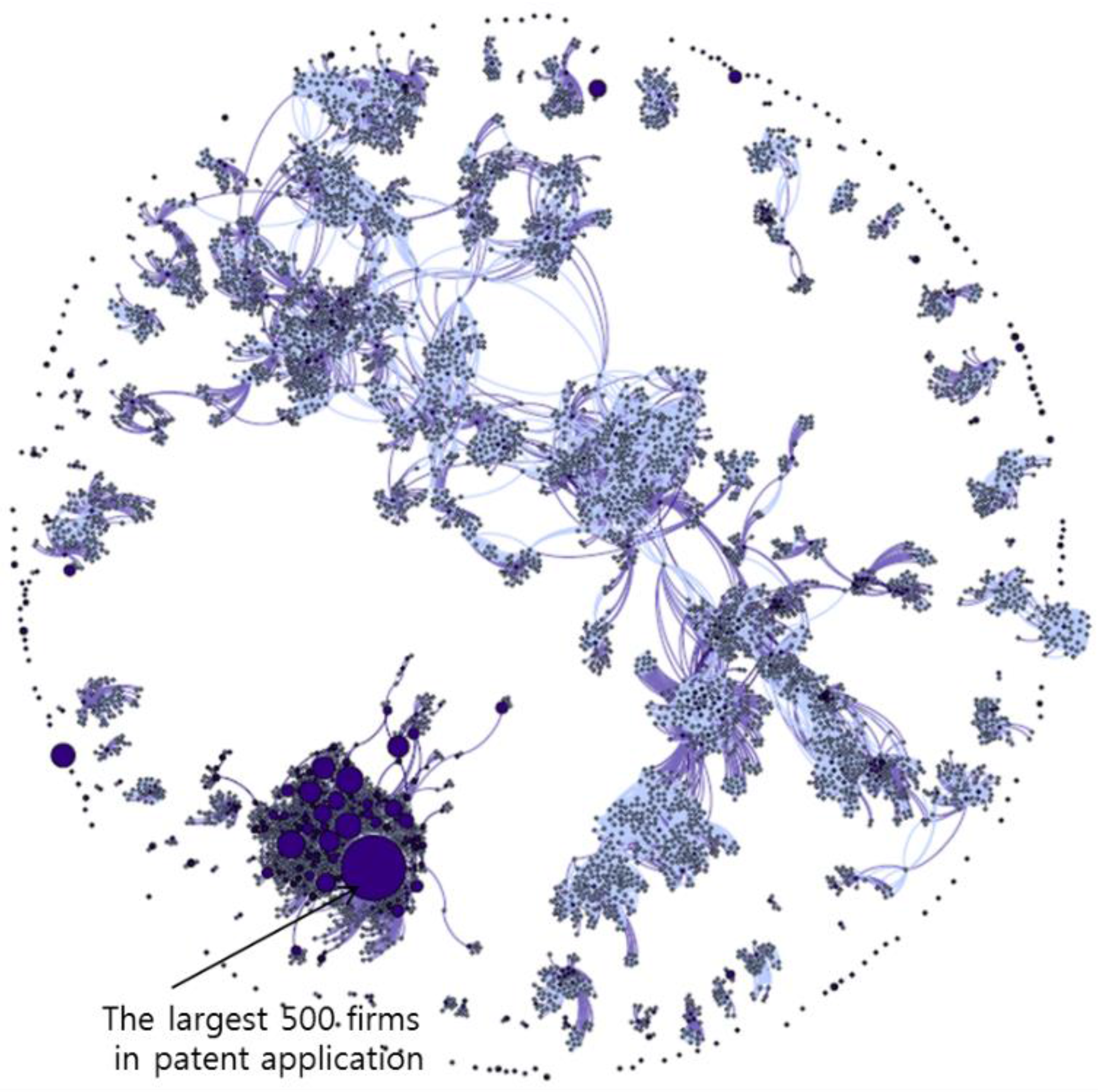 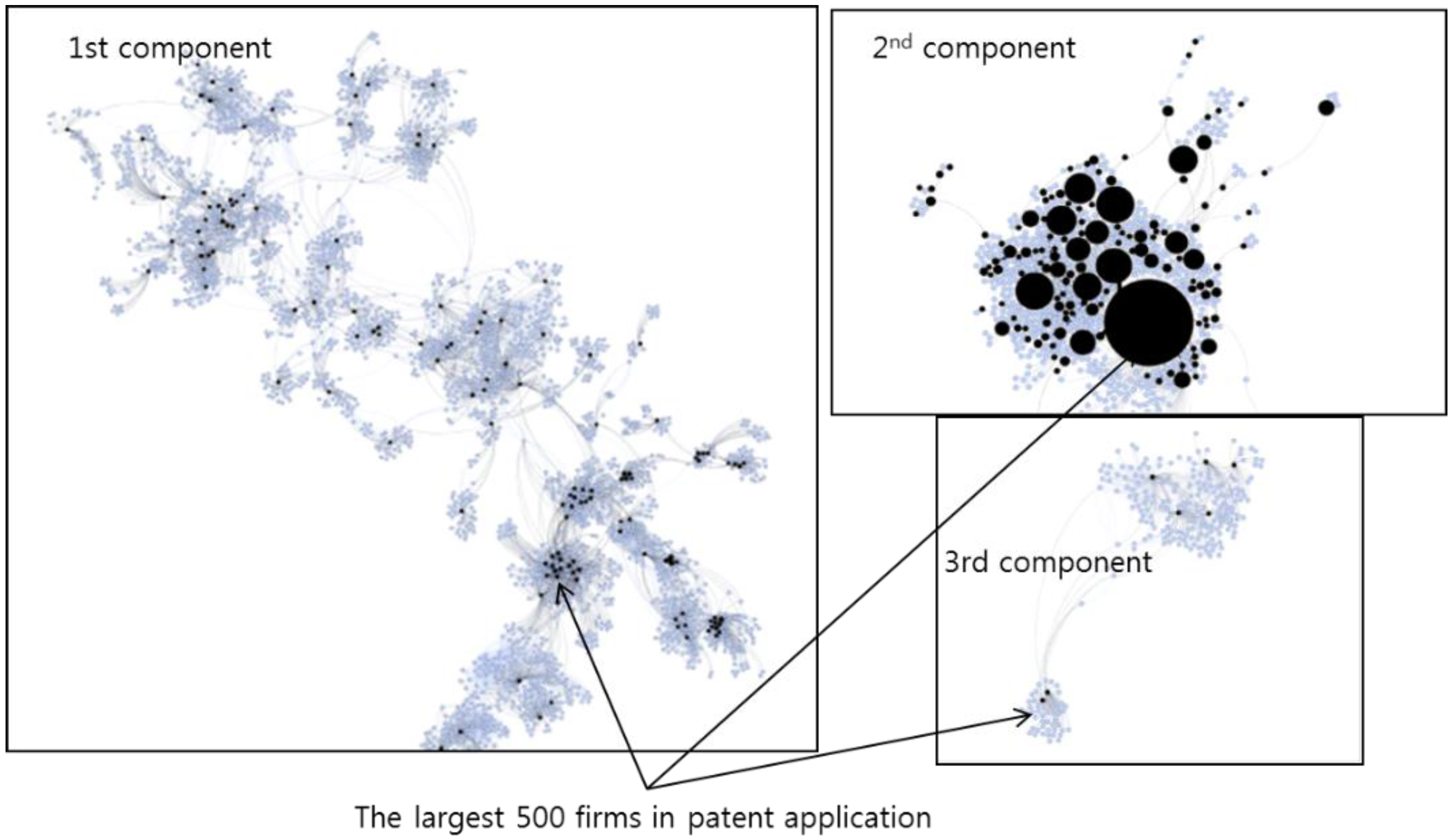 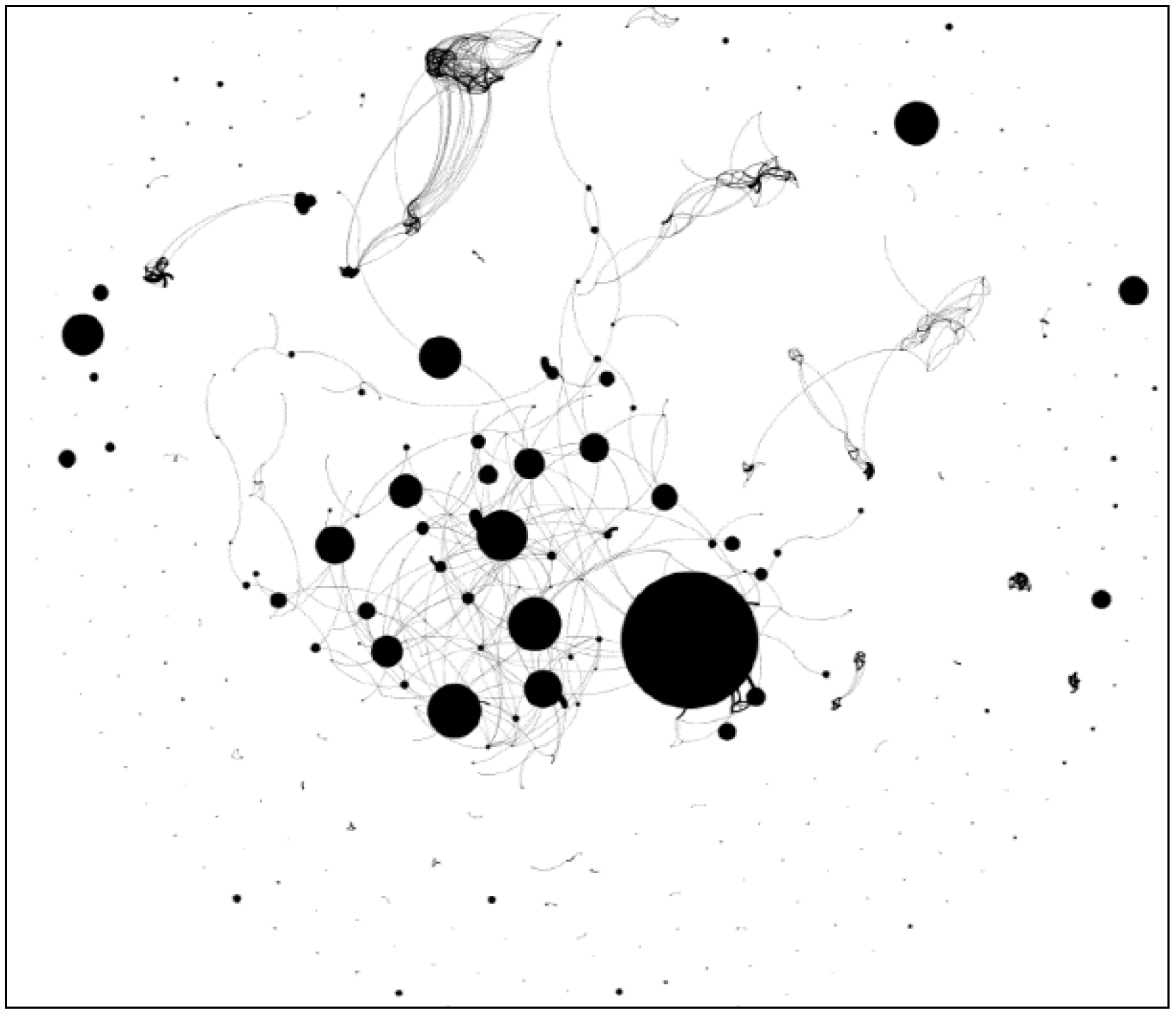 Table 1. The effect of open innovation.

Table 4. Networks among the 500 firms and the total of Apple, Nokia, Research in Motion, and Samsung.