Effects of Straw Incorporation on Soil Nutrients, Enzymes, and Aggregate Stability in Tobacco Fields of China
Previous Article in Journal

Too Much Is as Bad as Too Little? Sources of the Intention-Achievement Gap in Sustainable Innovation

Urbanization is a global problem with demographic trends. The urban heat island plays a dominant role in local climate systems. Despite existing efforts to understand the impacts of multiple urbanization factors on the urban heat island globally, very little is known about the attribution of urban heat island magnitude to urbanization in different locations or developmental phases. In this study, based on global land surface temperature data, urban spatial domain data, gross domestic product (GDP), and population data, we analyzed the influence of multiple urbanization factors on global surface urban heat island intensity (SUHII). We also tentatively compared the abovementioned factors between different regions across the globe, especially between China and the USA, the largest countries that are experiencing or have experienced rapid urbanization in recent decades. The results showed that global SUHII had remarkable spatial heterogeneity due to the geographical and socioeconomic variation between cities. There was a significant correlation between SUHII and population as well as GDP in global cities. Moreover, this study suggested that the impacts of population on SUHII might be stronger in the early stages of urbanization, and the GDP factor would become a critical factor at a certain development level. The urban area also had non-ignorable impacts on SUHII, while the correlation between SUHII and urban shape was relatively weak. All these may imply that the best approach to slow down SUHII is to find other solutions, e.g., optimize the spatial configuration of urban internal landscapes, when the urbanization reaches a high level. View Full-Text
Keywords: MODIS; space-for-time; SUHII; China; USA MODIS; space-for-time; SUHII; China; USA
►▼ Show Figures 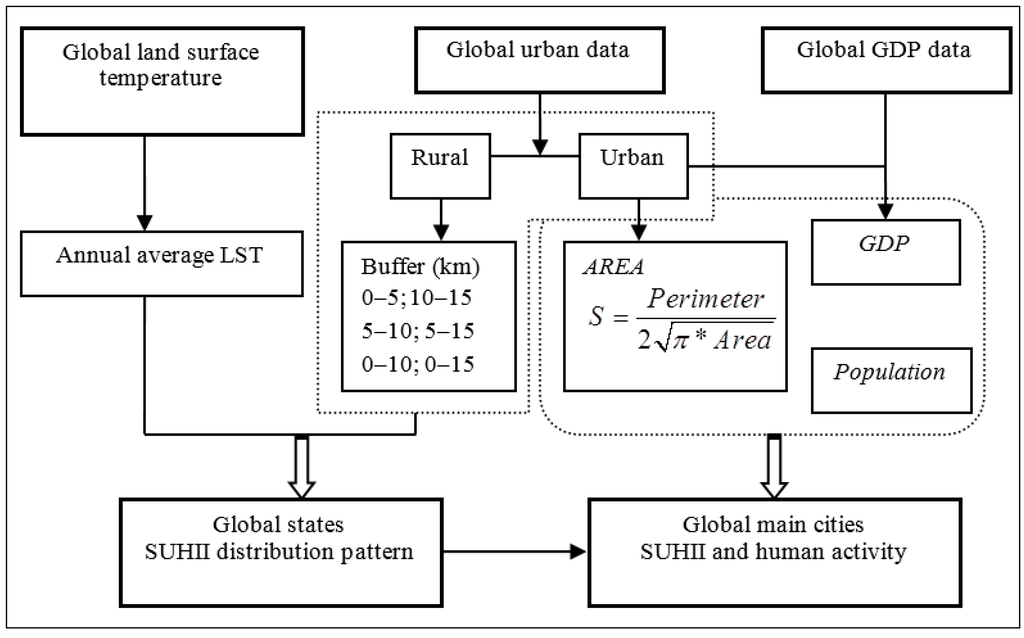