How Do Mega Projects Alter the City to Be More Sustainable? Spatial Changes Following the Seoul Cheonggyecheon Restoration Project in South Korea

Abandoned farmland is widespread over the world [1,2,3], in particular in arid and semi-arid regions. Primary causes of abandoned farmland in arid and semi-arid zones are soil fertility decline and soil secondary salinization. Abandoned farmland will gradually lose its soil nutrients [4], suffer degradation of soil physical characteristics [5], and eventually result in desertification [6]. Reclamation of abandoned farmland is an important practice to protect agricultural ecological systems, and is vital to a sustainable agriculture and a viable food security for a rapidly increasing world population.
Artificial reclamation, which involves efficient irrigation and fertilization, is more effective than natural recovery of an abandoned farmland. A process of vegetation recovery through natural succession will take much longer [7]. However, the effect of soil fertility improvement and soil salinization control using different artificial measures is significantly different [8,9,10]. For instance, different artificial vegetation recovery treatments will have a varied effect on the improvement of soil properties, such as soil nutrient, microbial biomass and enzyme activity [11,12]. Therefore, the study to assess different artificial reclamation treatments in a region will help with the selection of a proper reclamation mode for abandoned farmland.
The ecological effects of vegetation on soil nutrient content, such as carbon (C), nitrogen (N) and phosphorus (P), during the reclamation of abandoned farmland have drawn the attention of many researchers [13]. Studies have shown significant interactions between soil and vegetation during a reclamation process, such that soil and vegetation are constantly evolving and developing [14,15]. As vegetation recovers, soil nutrient contents will increase. These changes promote further recovery of vegetation.
Soil microorganisms drive soil structure formation, soil organic matter decomposition and soil nutrient transportation to plants. Therefore, it is essential to understand soil microbial sensitivity to environmental changes, including soil salinization and land reclamation. Saline stress may have a detrimental influence on microbial soil communities and their activities [16,17,18]. Since soil microbial biomass carbon (SMBC) and soil microbial nitrogen (SMBN) in microbial communities are important components of soil nutrient pools, changes of SMBC and SMBN may serve as pronounced indicators in soil microorganisms and may help to recognize the reclamation effect of abandoned farmland [19,20].
Soil enzymes are critical in soil biochemical transformations. Enzyme activity, the quantity of active enzyme present, is useful in assessing soil quality of reclamation land [21,22,23]. Soil enzymes come from living and dead microbes, plant roots and residues, and soil animals. They play an important role in maintaining healthy soil ecological conditions, such as both physical and chemical properties and fertility [24]. Soil enzyme activities catalyze several vital reactions in soils, such as decomposition of organic matter, formation of agglomerates and nutrient cycling [25,26,27]. They are important indicators for evaluating soil fertility levels in different reclamation treatments.
Oasis agriculture has developed rapidly in Xinjiang during the past 60 years. This region is now an important grain and cotton production area of China. As a marginal region with a fragile ecological balance, irrigation, fertilization and other human activities altered regional soil properties [28]. In particular, the irrational use of land and water resources has caused secondary salinization of farmland, such as intensive irrigation, overuse of fertilizers and inappropriate planting patterns. More than one-third of the total farmland was abandoned in Xinjiang [29]. With the wide-spread adoption of drip irrigation technology since 1996, large areas of farmland have been reclaimed in the region. However, there is a debate about which fit-for-purpose reclamation method should be adopted. Little is known about the influence of these methods on soil quality. In this study, a field experiment of four artificial reclamation treatments and one natural succession was designed to explore the best reclamation mode by assessing and comparing the effects of different reclamation treatments in abandoned farmland in Xinjiang. There are two major steps in this study: (1) analysis of the difference in soil nutrient, microorganism and enzyme activity under different reclamation treatments; (2) a comprehensive assessment on the most optimal reclamation treatment. The outcome of this study will provide a much needed reference framework for future studies of reclamation in abandoned farmland, adjustment of cropping pattern and sustainable utilization of salinized farmland.

The Manasi River Basin is located at the center of the Eurasian continent, along the southern margin of the Junggar Basin in Xinjiang (44°33′ N, 85°37′ E, 378 m above sea level, Figure 1). The basin has an arid, continental climate [30]. The average annual rainfall is 153 mm and the average annual potential evapotranspiration is 1521 mm (1956–2010). The frost-free period is 168–171 days. Halosols are the dominant soils in the basin. The main plant species are Tamarix ramosissima, Salsola collina, Kalidium foliatum, Halostachys belangeriana, and Limonium spp. Vegetative cover on the abandoned land was 20%–30% before reclamation. Irrigation water in the basin comes mainly from snowmelt in the Tianshan Mountains. Since 1948, about 400,000 ha of farmland have been cultivated in the Manasi River Basin. This basin has become Xinjiang’s largest oasis agricultural area and the fourth largest national agricultural irrigation area in China. Long-term flood irrigation has caused the groundwater table to rise in Manasi River Basin. Drip irrigation under plastic film has replaced the original drainage system (alkali drainage canal) since 1996. Adoption of drip irrigation in the region has accelerated secondary salinization and abandonment of nearly 130,000 ha of farmland in the basin. This amount is equivalent to about one-third of the basin’s total cultivated land.

Under the pressure of an increasing population and a growing demand for agricultural products, reclaiming abandoned farmland has been a research priority in the region and has gained much support from local government. In 2008, 2000 ha salinized soil near Shihutan in the Manasi River Basin was investigated. The land had been abandoned for approximately 20 years. Cotton is widely planted as a saline-tolerant crop, and alfalfa which has a short growth period can tolerate high salinity levers. Although trees can maintain lower groundwater level and decrease soil salinity, their economic payback period is too long. Tree-wheat intercropping can achieve better benefits than trees only. Four artificial reclamation treatments were designed and implemented: (i) 15 ha of continuous cotton (CC); (ii) five ha of continuous alfalfa (CA); (iii) 50 ha of tree–wheat (Populus afghanica) intercropping (TW); and (iv) 15 ha of trees (Populus afghanica) (TS). The spacing is 1.75 m × 1.75 m in the TS treatment. The spacing of trees is 1 m × 1 m, and 2 m trees and 8 m wheat were arranged between rows in the TW treatment. In addition, two ha of abandoned farmland with natural vegetation succession was used as a control treatment (CK) (Figure 2, Table 1). Five treatments were randomly distributed over the study area. Three plots were surveyed in each reclamation treatment for plant density, irrigation times and quantity, fertilizer amount and mode. A summary of each reclamation treatment is given in Table 1.
Soil samples were collected during the period of 2011–2012. The samples were taken in an “S-shaped” pattern (0–40 cm) from five points within each reclamation treatment plot. The five samples were mixed and three 1 kg subsamples were extracted for analysis using the “quartering” method [31]. Soil biological properties were determined from fresh soil samples. Soil physical and chemical properties were determined from air-dried soil samples.

Soil urease activity followed the order TW > CA > CC > TS > CK (Figure 6). It was significantly higher in TW than in any other treatments. Sucrase not only increased the soluble nutrient content of soil, but also had a role in soil C cycle. Compared with CK, sucrase activity increased by 105% under CA, 97.8% under TW, 44.5% under CC, and 21.2% under TS. Soil phosphatase facilitated the decomposition of soil organic P compounds and played a role in the transformation of soil P. Soil phosphatase activity followed the order TW > TS > CC > CA > CK, as show in Table 4. Soil phosphatase activity was significantly higher under TW than under any other reclamation treatments.

The focus of this study is to assess the effect of soil fertility improvement and soil salinization control under different reclamation treatments. Results show that all four artificial reclamation treatments significantly increased soil nutrient content. The magnitude of soil nutrient content followed the order of TW > CC > CA > TS > CK. Soil microbial population and biomass were highest under TW and CA. The activities of soil urease, sucrase, and alkaline phosphatase were higher under the four artificial reclamation treatments than under CK. Overall, TW and CA were the preferred treatments for reclaiming abandoned farmland. In terms of the ecological benefits, TW and CA were the best treatments. If both economic effects and ecological benefits are considered, then TW was the best means for reclamation. The integration of soil ecological environment and economic benefits can provide a comprehensive assessment and a guide for decision makers to achieve sustainable land resource utilization in arid areas.
Although this study demonstrates that an optimal reclamation treatment can be selected based soil nutrient, microorganism and enzyme activity, further research is needed to focus on investigating other reclamation treatments to ensure an adequate and detailed abandoned land reclamation assessment. These include the assessment of agricultural water resource management, sustainable land use and the ecological environment.

This research was supported by the Special Fund for Agro-scientific Research in the Public Interest (201503120); Science and Technology Research and Achievement Transformation Project of The Xinjiang Production and Construction Crops (2016AD022); and the National Key Technology Research and Development Program of the Ministry of Science and Technology of China (2014BAC14B03). We gratefully acknowledge the helpful comments from the anonymous referees who helped make significant improvements in the analysis and writing. We also thank Jeff Gale for his conscientious help in editing the paper. 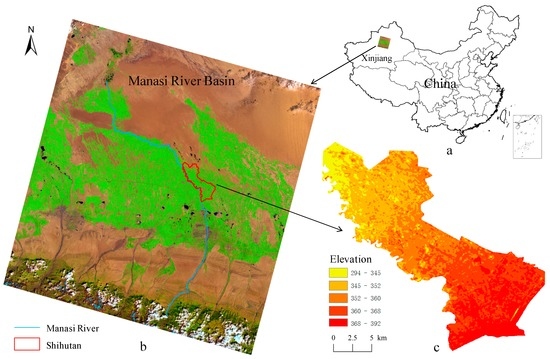 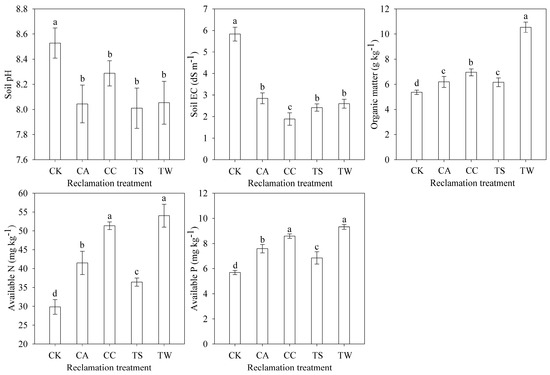 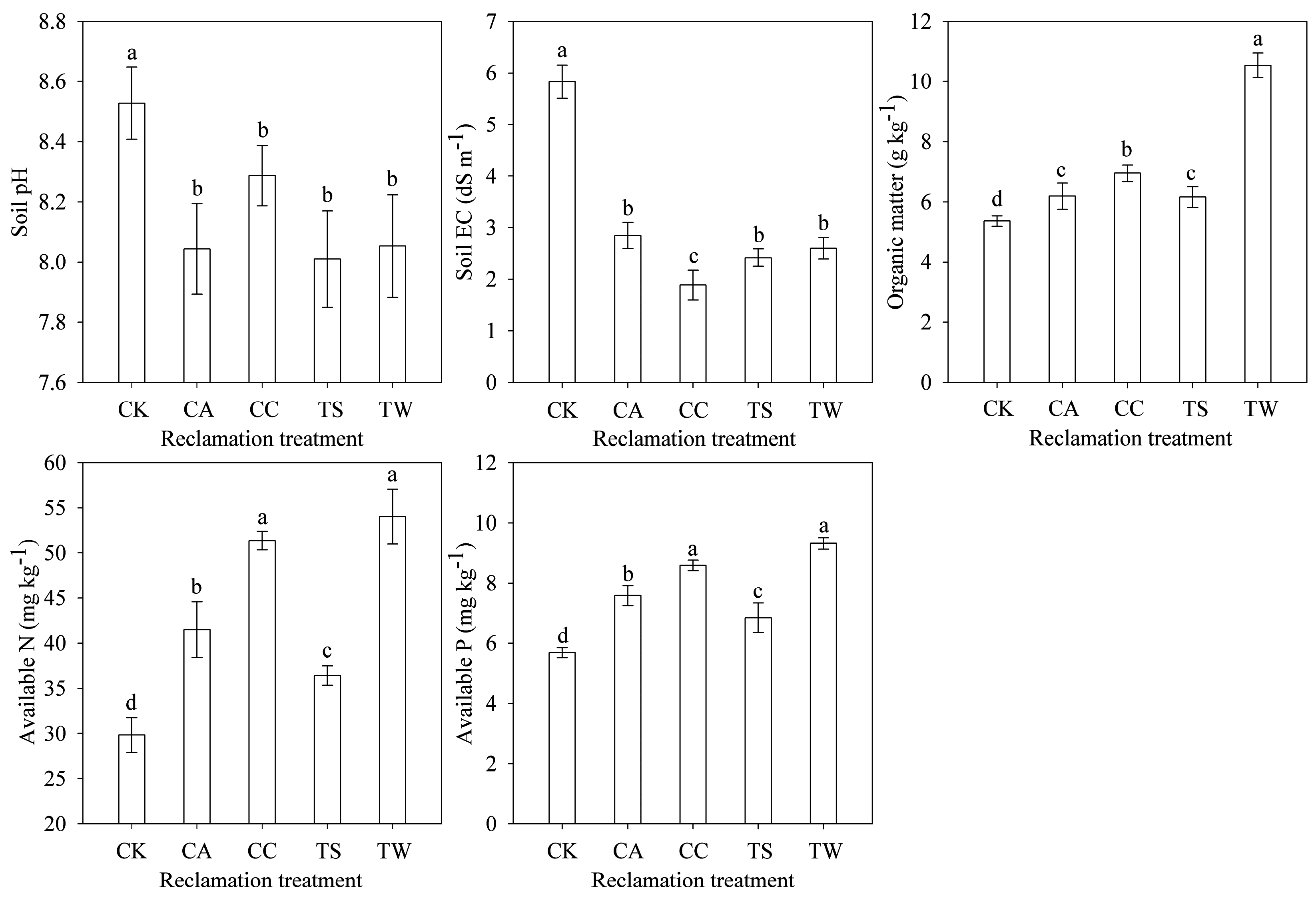