Estimating Potential GDP for the Romanian Economy and Assessing the Sustainability of Economic Growth: A Multivariate Filter Approach

The present study illustrates a multidimensional analysis of an indicator of urban land use efficiency (per-capita built-up area, LUE) in mainland Attica, a Mediterranean urban region, along different expansion waves (1960–2010): compaction and densification in the 1960s, dispersed growth along the coasts and on Athens’ fringe in the 1970s, fringe consolidation in the 1980s, moderate re-polarization and discontinuous expansion in the 1990s and sprawl in remote areas in the 2000s. The non-linear trend in LUE (a continuous increase up to the 1980s and a moderate decrease in 1990 and 2000 preceding the rise observed over the last decade) reflects Athens’ expansion waves. A total of 23 indicators were collected by decade for each municipality of the study area with the aim of identifying the drivers of land use efficiency. In 1960, municipalities with low efficiency in the use of land were concentrated on both coastal areas and Athens’ fringe, while in 2010, the lowest efficiency rate was observed in the most remote, rural areas. Typical urban functions (e.g., mixed land uses, multiple-use buildings, vertical profile) are the variables most associated with high efficiency in the use of land. Policies for sustainable land management should consider local and regional factors shaping land use efficiency promoting self-contained expansion and more tightly protecting rural and remote land from dispersed urbanization. LUE is a promising indicator reflecting the increased complexity of growth patterns and may anticipate future urban trends. View Full-Text
Keywords: urban gradient; urban containment; indicators; socioeconomic context; Southern Europe urban gradient; urban containment; indicators; socioeconomic context; Southern Europe
►▼ Show Figures 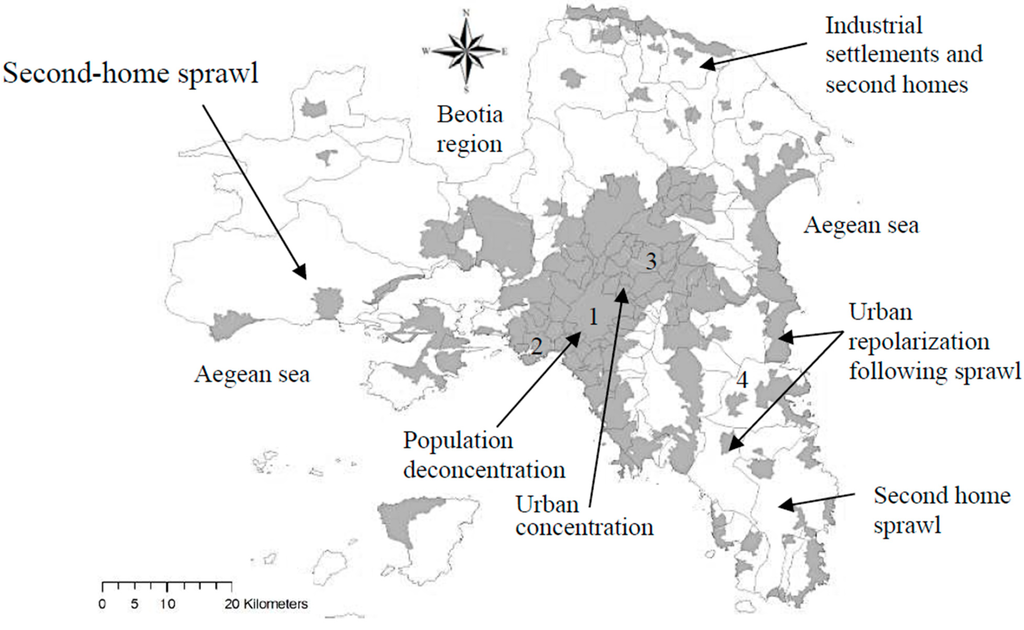