Rethinking Study and Management of Agricultural Systems for Policy Design

There is a concern that agriculture will no longer be able to meet, on a global scale, the growing demand for food. Facing such a challenge requires new patterns of thinking in the context of complexity and sustainability sciences. This paper, focused on the social dimension of the study and management of agricultural systems, suggests that rethinking the study of agricultural systems entails analyzing them as complex socio-ecological systems, as well as considering the differing thinking patterns of diverse stakeholders. The intersubjective nature of knowledge, as studied by different philosophical schools, needs to be better integrated into the study and management of agricultural systems than it is done so far, forcing us to accept that there are no simplistic solutions, and to seek a better understanding of the social dimension of agriculture. Different agriculture related problems require different policy and institutional approaches. Finally, the intersubjective nature of knowledge asks for the visualization of different framings and the power relations taking place in the decision-making process. Rethinking management of agricultural systems implies that policy making should be shaped by different principles: learning, flexibility, adaptation, scale-matching, participation, diversity enhancement and precaution hold the promise to significantly improve current standard management procedures.
Keywords: Complex Socio-ecological Systems; constructivism; realism; pragmatism; food security Complex Socio-ecological Systems; constructivism; realism; pragmatism; food security

2. Rethinking the Study of Agricultural Systems

Although progress has been made during the last few decades to integrate complex features into agricultural studies, policy-makers may still have to face many challenges when promoting sustainability. Their task is impeded by the different patterns of thinking underlying agricultural studies. Hence, policy makers may find the following short summary of agricultural system qualities and some comments on constructivist and realist views shaping agricultural studies useful.
(a) Agriculture can be characterized as a complex socio-ecological system (SES, Figure 1). SESs are qualified with far-from equilibrium states, co-evolution of system components, self-organizing properties, non-linear dynamics, multivariable structure, high levels of uncertainty, control of limited factors and cross-scale relationships in time and space. As a complex system, agriculture is an expression of certain human-environment interactions in a dynamic process shaped by uncertainty, errors, learning and adaptation. The need to rely on a systems approach was formulated decades ago, both in agriculture and ecology [22,23,24]. However, in the agricultural sciences, the perception of humans as decoupled from, and in control of, nature still remains, which, in turn, is an underlying cause of society’s vulnerability [25]. In analogy to physics, agricultural sciences may also suffer from a predominant reliance on logical positivism and instrumentalism [26,27]. Logical positivism can be made responsible for atomistic or sectorial thinking dominating over holistic thinking and for preferring experimental approaches over abstract laws and fundamental principles for supporting scientific claims [15]. This pattern of thinking is also a hindrance for overcoming the limitations of linear cause and effect chain analyses. The limitations are further aggravated by the narrow methodology applied to support scientific claims. Namely, agronomy’s focus on the state of systems relies heavily on controlled field trials for hypotheses testing and favors frequentist approaches for data analysis. Thereby, it overlooks the advantages of process analyses for explaining the state of systems and disregards powerful analytic tools provided by information theory-based methods; for example, [28]. The predominant instrumentalism in agricultural sciences also motivates agronomists to disregard the dynamics of agricultural systems (of ecological processes and social value systems) and to focus instead on technologies and futile efforts to make long-term predictions on agricultural productivity and profitability. As a consequence, agronomists overlook that complex structures, nonlinear behaviors and uncertainties seriously restrict the predictability of system dynamics [29,30]. Importantly, in agricultural systems, the uncertainty arising from human interventions is often higher than uncertainty derived from nature [31]. Distracted by instrumentalism, agronomists may also fail to see the limitations of technology-centered approaches that are a barrier for addressing new challenges, such as climate change, food security or emerging diseases with scientific methods [32,33], being also a motivation to neglect the dynamics of agricultural development and to strive for idealized states, such as organic and integrated systems. The limitations of logical positivism and the disadvantages of instrumentalism are further aggravated by decisions and actions based on a utilitarian value system, disregarding deontological and virtue ethics [32]. 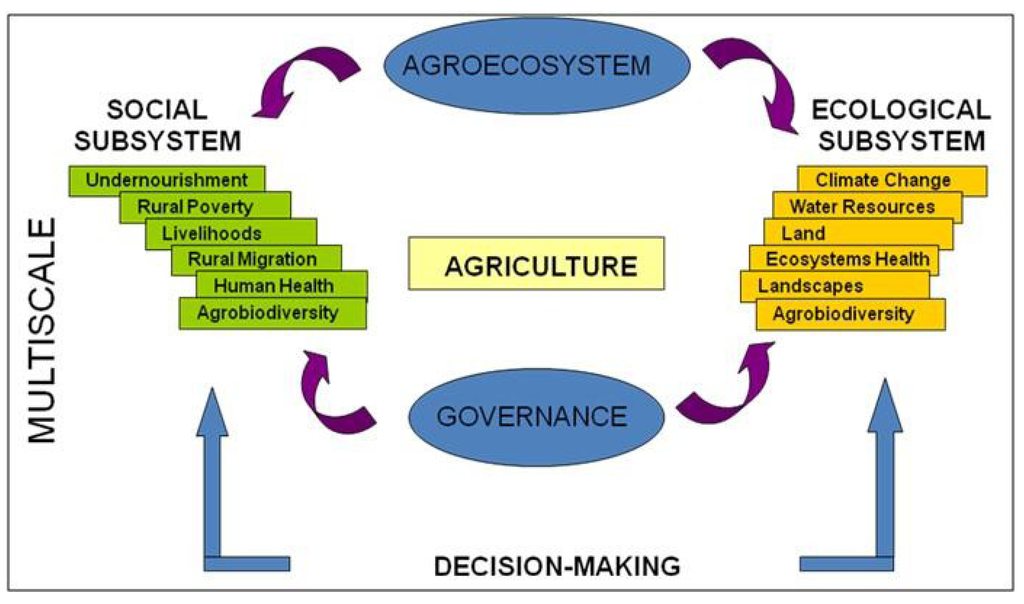 Defining the Role of Agriculture in Society

A clear example of the importance of worldviews and narratives in the process of designing agricultural policies for sustainability is the definition of the role of agriculture in society. This is important, since this affects both the assessment and management tiers of policy-making, and a lack of clarity during this process facilitates rambling on about important issues and, even, the suggestion of contradictory policies. The existence of different narratives or worldviews that impose themselves favors a lack of consensus in the policy outcomes [29]. Despite a risk of oversimplification and with the objective to exemplify how narratives determine agricultural systems S&M and, thus, decision-making, only the economic and the human rights narratives [13], as two distinct and opposed narratives about the role of agriculture in society, are considered here. In reality, a range of different narratives co-exist in different contexts.
The economic narrative suggests that the main role of agriculture is to contribute to development through economic growth, which will finally lead to an increase in social welfare (including improving nutrition), while negative ecological impacts associated with agriculture are minimized through the development and spread of new technologies. This narrative is mainly supported by major governments; for example, in Ethiopia [53], some actors in the private sector (agribusiness, large farmers) and some multilateral institutions. For instance, the Food and Agriculture Organization of the United Nations (FAO), states that international agricultural policies should aim at raising levels of nutrition, increasing agricultural productivity, improving the lives of rural people and contributing to the growth of the world economy [54]. In this narrative, problems related to agriculture are very often driven by an inappropriate or insufficient use of technology (e.g., low agricultural productivity). Technology innovations, usually from top-down initiatives, are seen as key elements to achieve sustainability. Policies are market-centered, and inefficient farmers (in terms of agricultural productivity) are prone to disappear, unless they modernize and enter into regional or international markets.
The human-rights narrative is promoted by some parts of civil society, small peasants’ organizations and other multilateral institutions (e.g., United Nations Special Rapporteur on the Right to Food). According to them, the main goal of agriculture is to provide a healthy and culturally adequate food, through a democratization of the food system, the recognition of the role of peasants’ livelihoods in sustainable development, the recognition of other forms of knowledge and the promotion of community-based approaches. This is based on participation and enhances access rights, equity and social responsibility [55,56,57]. In this narrative, only people-centered policies can overcome the problems related to food. They recognize the important role of technology and innovations developed through bottom-up approaches and suggest that problems related to agriculture are more political than technical.
Before defining the role of agriculture in different contexts, it is important to consider the initial state of agricultural systems and to promote the participation of actors and society, in the way it is suggested later in the article, since different contexts and situations may result in different narratives. Policy makers also need to ponder that technical solutions are important, but unless political issues are considered, they will only produce partial and incomplete successes [13]. Traits in which initial short-term success lead to unsustainability and vulnerability in the long run [35] should be avoided, too.

Table 1. Principles guiding different types of management (A: adaptation; F: flexibility; L: learning; S-M: scale-matching; P: participation; D: diversity; Pr: precaution).
This paper states that a revision of thinking patterns is necessary for overcoming the difficulties of modern agriculture. The rethinking of the S&M of agricultural systems may only scratch the surface, but, nevertheless, indicates that there is an unexploited potential in a revision of philosophies underlying knowledge acquisition and rationalization of management procedures. In our view, the realization of this potential holds the promise to improve agricultural policies in leaps rather than in incremental gains. Above, we consider this to be a prerequisite for meeting the challenges that agriculture is facing today. Hence, the rethinking undertaken here may contribute to on-going assessments for policy design by international institutions (e.g., FAO [92] and European Commission [12]) and point to opportunities for further developing the ideas. Though the paper put emphasis on the policy level of food production systems, the rethinking also points to a potential for improving strategic and tactic levels in food production-oriented and multifunctional agriculture.

Rethinking how current agricultural policies are designed is needed. From this paper, we can conclude that the intersubjective nature of knowledge needs to be better integrated into the study and management of agricultural systems than has been done so far. This forces us to develop new modeling tools and scenario analysis; it also requires recognizing the nonexistence of panaceas and demands for more and better understanding of the social dimension of agriculture, including its role in society in different contexts. Finally, it asks for the recognition and visualization of the different framings and narratives on the S&M processes and the power relations taking place in the decision-making process. In terms of management, the adoption of some basic principles, such as learning, flexibility, adaptation, scale-matching, participation, diversity and precaution, may significantly improve the current standard procedures.

The authors want to thank their institutions. Beverly McIntyre and Hans Herren are acknowledged for their suggestions and support. We thank anonymous referees for their useful comments.