Cultivation of Desmodesmus multivariabilis for the Treatment of Cosmetic Wastewater

:
The main disadvantages of HCCI engines are the knocking tendency at high engine loads, the challenge of the start of the combustion, control of the combustion phase, and the narrow operating range. In this study, we aimed to control the combustion processes in HCCI engines and to expand their working range by improving the fuel properties of fusel oil by the addition of diethyl ether. Thus, the variations in the in-cylinder pressure, rate of heat release, indicated mean effective pressure, start of combustion, combustion duration, CA50, indicated thermal efficiency, mean pressure rise rate, hydrocarbon and carbon monoxide emissions were investigated. It was observed that the in-cylinder pressure and rate of heat release were taken into advance and the test engine could be operated for a wider range by increasing the diethyl ether ratio in the blend. The indicated mean effective pressure increased by 67.5% with DEE40 fuel compared to the DEE80. Under the same operating conditions, HC and CO emissions decreased by 41.6% and 56.2%, in use of DEE40. Furthermore, the highest indicated thermal efficiency was obtained as 42.5% with DEE60 fuel. Maximum hydrocarbon and carbon monoxide emissions were observed with DEE80 fuel as 0.532% and 549 ppm, respectively.
Keywords:
fusel oil; diethyl ether; HCCI; combustion; performance; emission

The main challenges of HCCI engines are the knocking at high engine loads, narrow operating range, difficulties about start of the combustion and control of the combustion phase. In this study, we aimed to control the combustion phase in an HCCI engine and to expand the working range by improving the fuel properties of fusel oil, which is a waste product and does not have an economical equivalent, with the addition of diethyl ether. Thus, in the present study, the effects of fusel oil/DEE fuel blends on performance, combustion and emissions characteristics in a single-cylinder HCCI engine were investigated experimentally. During the experiments, three different fuel blends, which are DEE40, DEE60 and DEE80, were used as the test fuel. The experiments were carried out at constant IAT of 353 K, different engine speeds and between 1.4 and 4.0 lambda values. The variations in in-cylinder pressure, ROHR, IMEP, SoC, CA50, combustion duration, ITE, MPRR, HC and CO emissions were investigated.
It was observed that the in-cylinder pressure and ROHR were taken into advance, the operating range shifted towards the poor mixture region, the SoC and the CA50 advanced, the combustion duration decreased, the MPRR increased, the IMEP decreased, HC and CO emissions increased, and the test engine could be operated a wider operating range with the increase in DEE ratio in the mixture. In addition, the highest ITE was obtained as 42.5% with DEE60 fuel. The addition of DEE to fusel oil improved the fuel properties, and therefore the operating range of the engine expanded. However, the fact that the combustion took place at earlier crank angles caused the oxidation chemistry to deteriorate, increasing the emissions of CO and HC. The highest CO and HC emissions were recorded as 0.532% and 549 ppm in the use of DEE80 fuel at an engine speed of 1600 rpm and lambda of 4.0. High engine speed and extremely lean mixture conditions worsened HC and CO emissions simultaneously.
In summary, the main bullet points of this study are as follows: Fusel oil and DEE fuel blends can be used as an alternative fuel in HCCI engines, the operating range of HCCI engine can be extended by adding DEE into fusel oil, and the auto-ignition ability of the mixture can be increased by adding DEE into fusel oil. DEE can be used in internal combustion engines without major changes in the engine. However, DEE has high volatility and a high flammability. Therefore, it is necessary to increase the precautions in fuel storage systems. However, since fusel oil is an alcohol derivative, it has a high water holding capacity and can cause corrosion. For this reason, the corrosion effects of fusel oil and DEE mixtures should also be investigated. In this study, it can be stated that DEE60 fuel is feasible because HCCI combustion can be controlled and maximum indicated thermal efficiency can be obtained. However, the optimum operating range can be determined by simultaneous control of the compression ratio and EGR in an engine with a variable compression ratio. In addition, it is predicted that HCCI engines can be used in hybrid vehicle technology with alternative fuels due to their high thermal efficiency advantage. 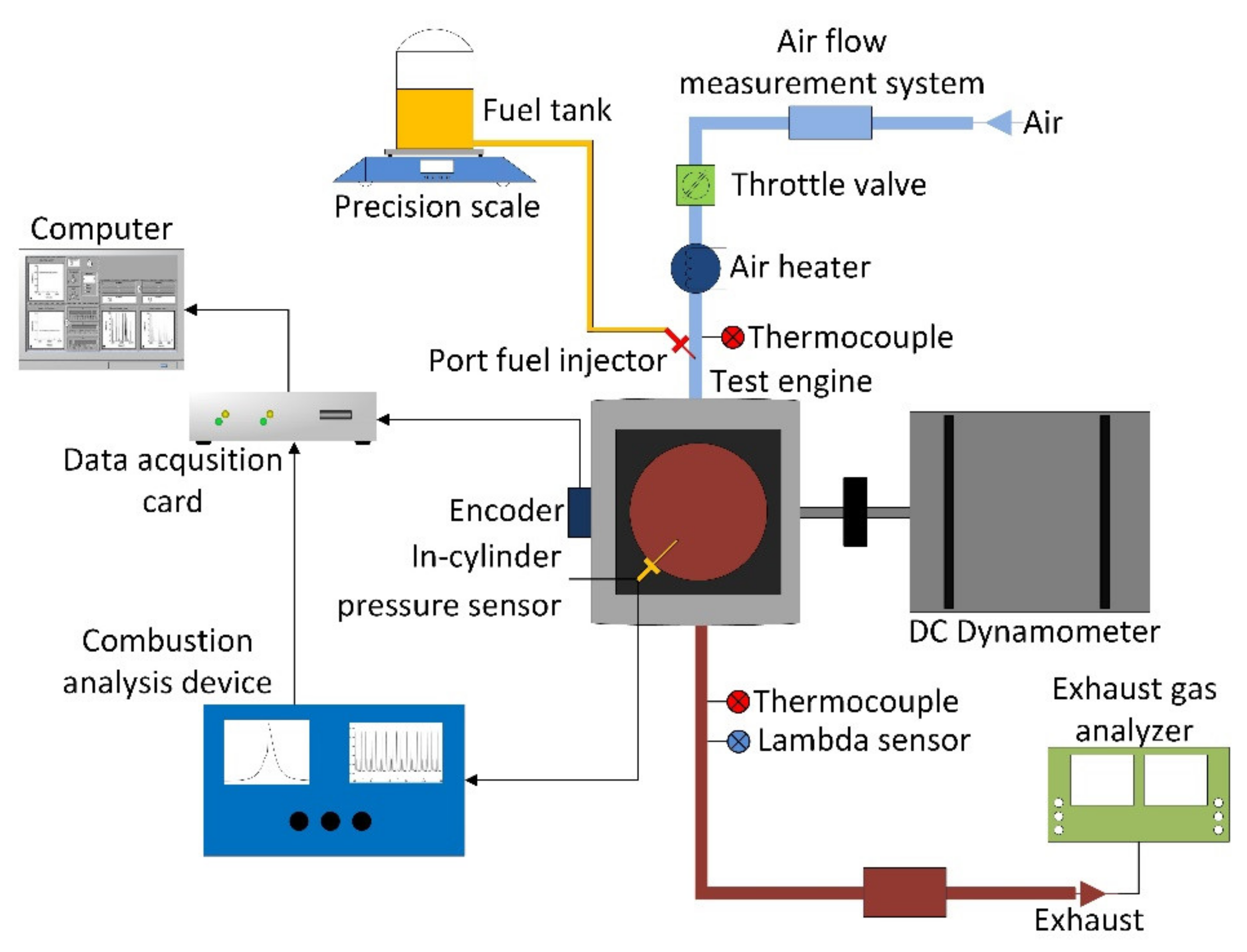 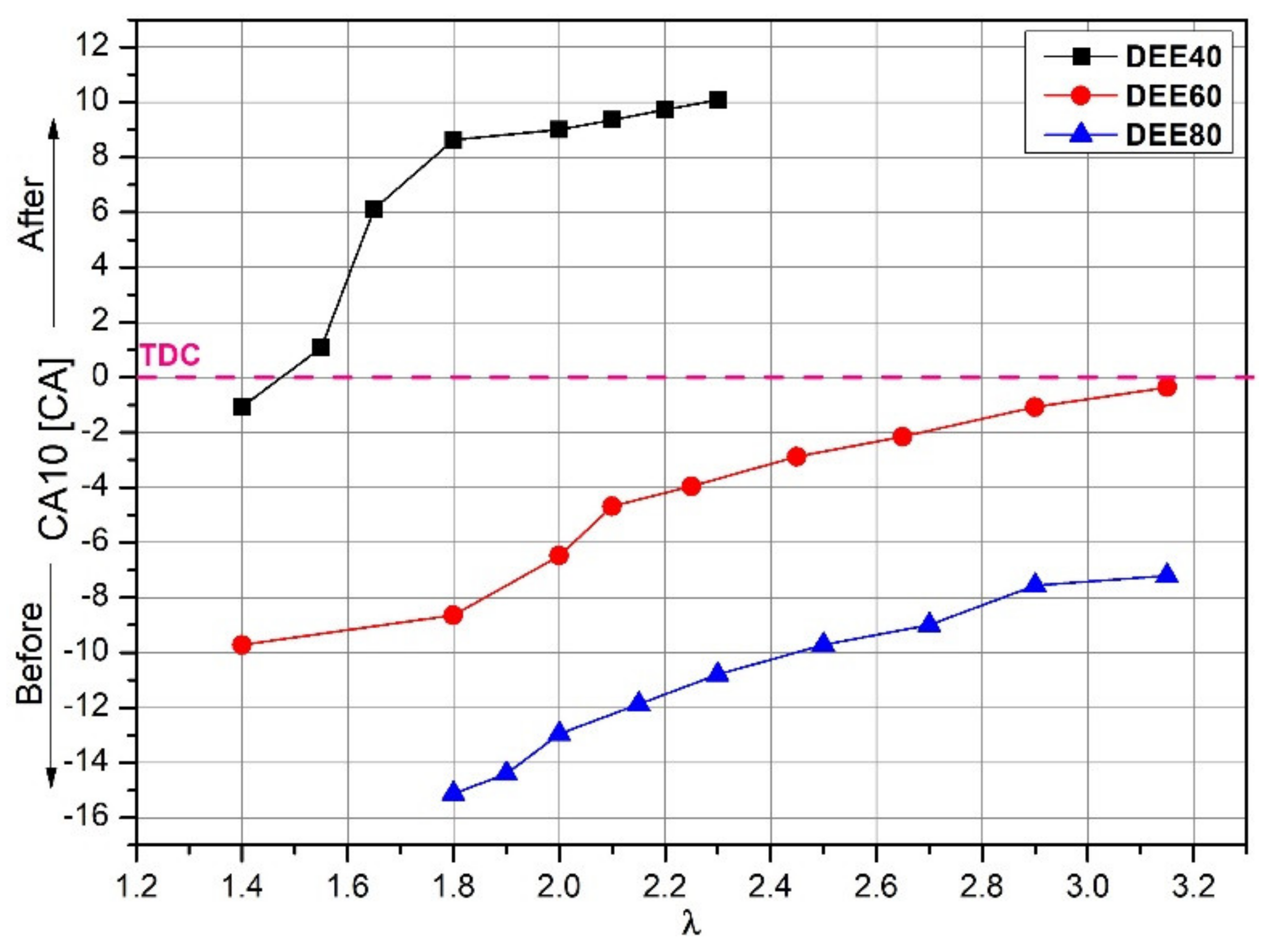 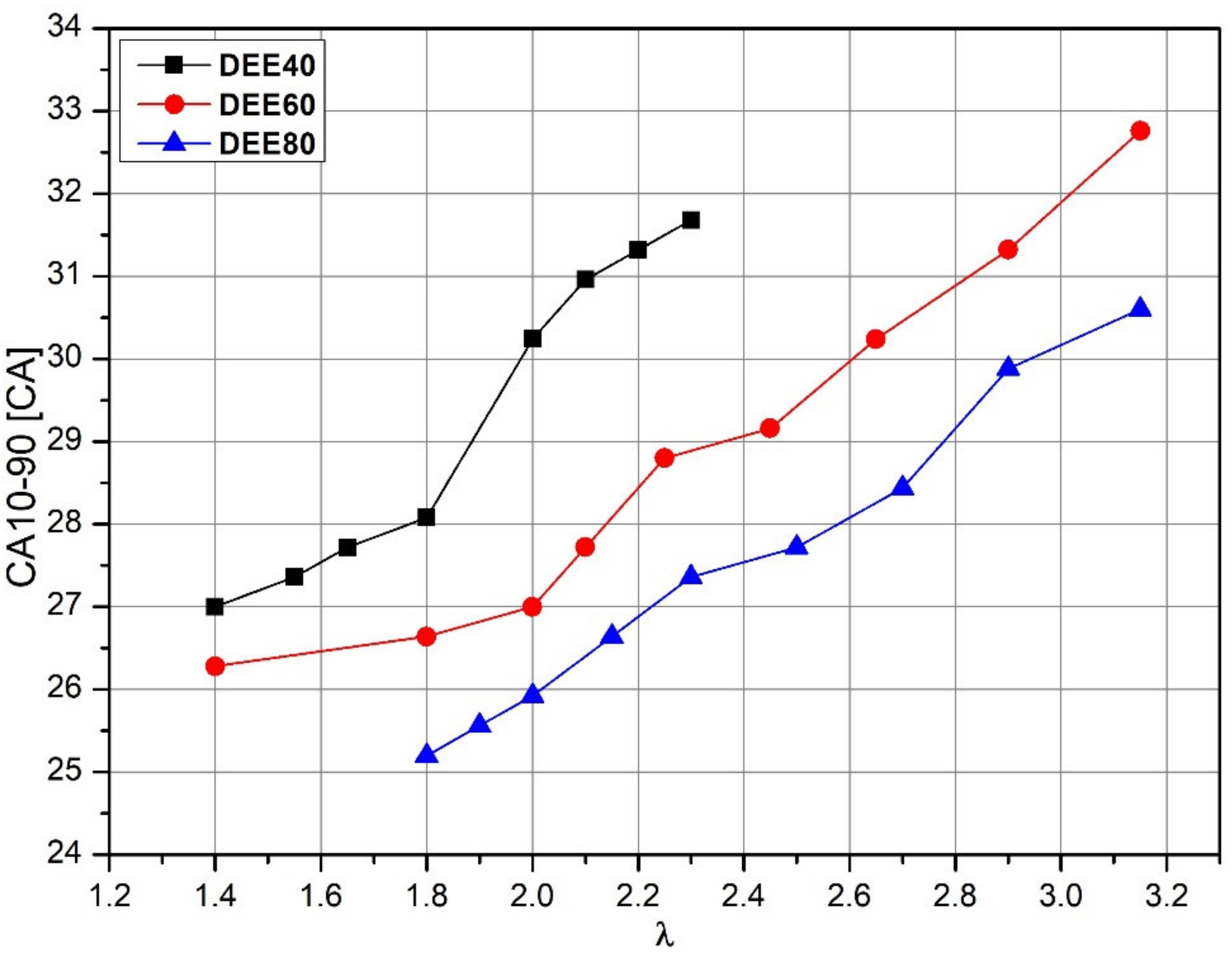 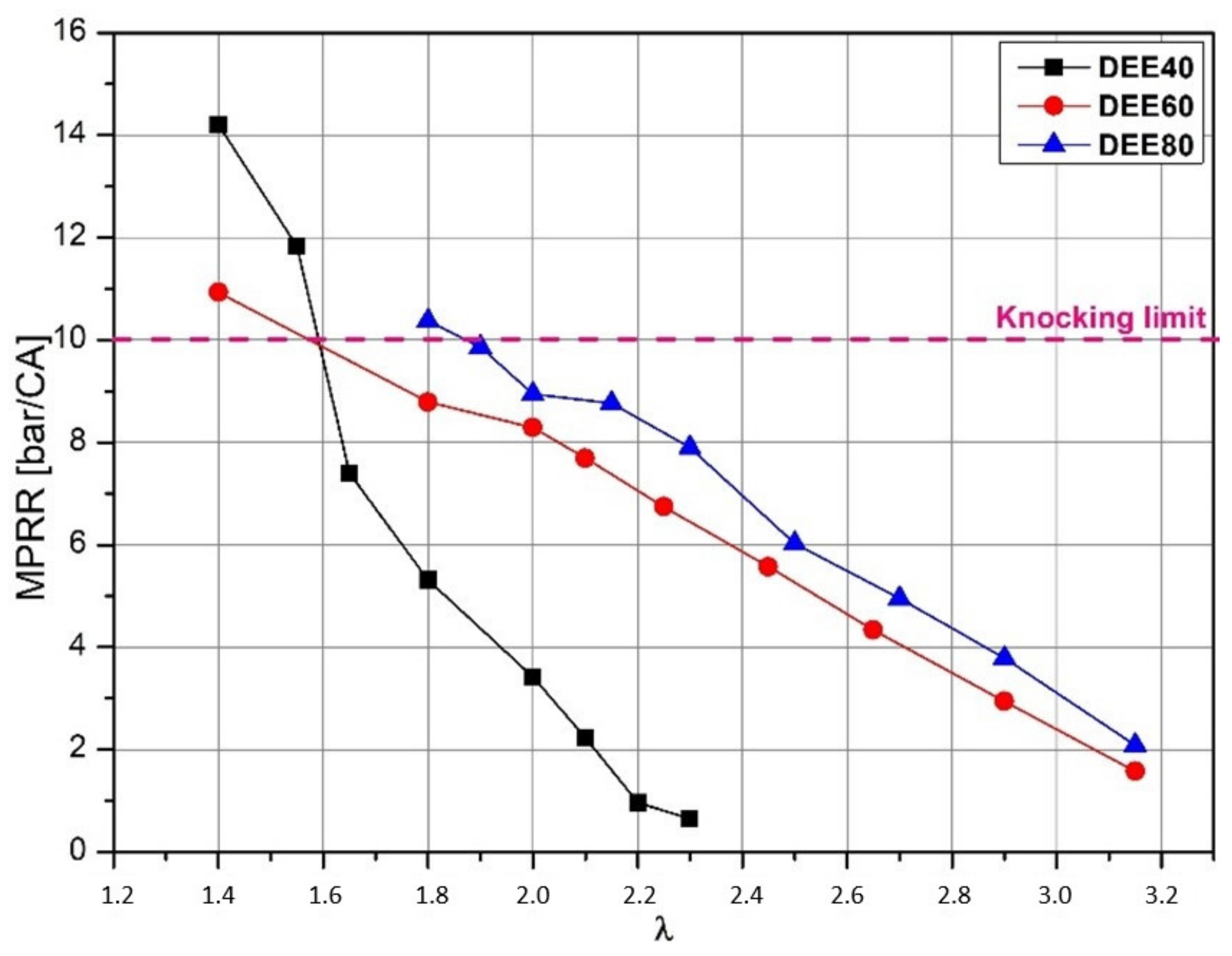 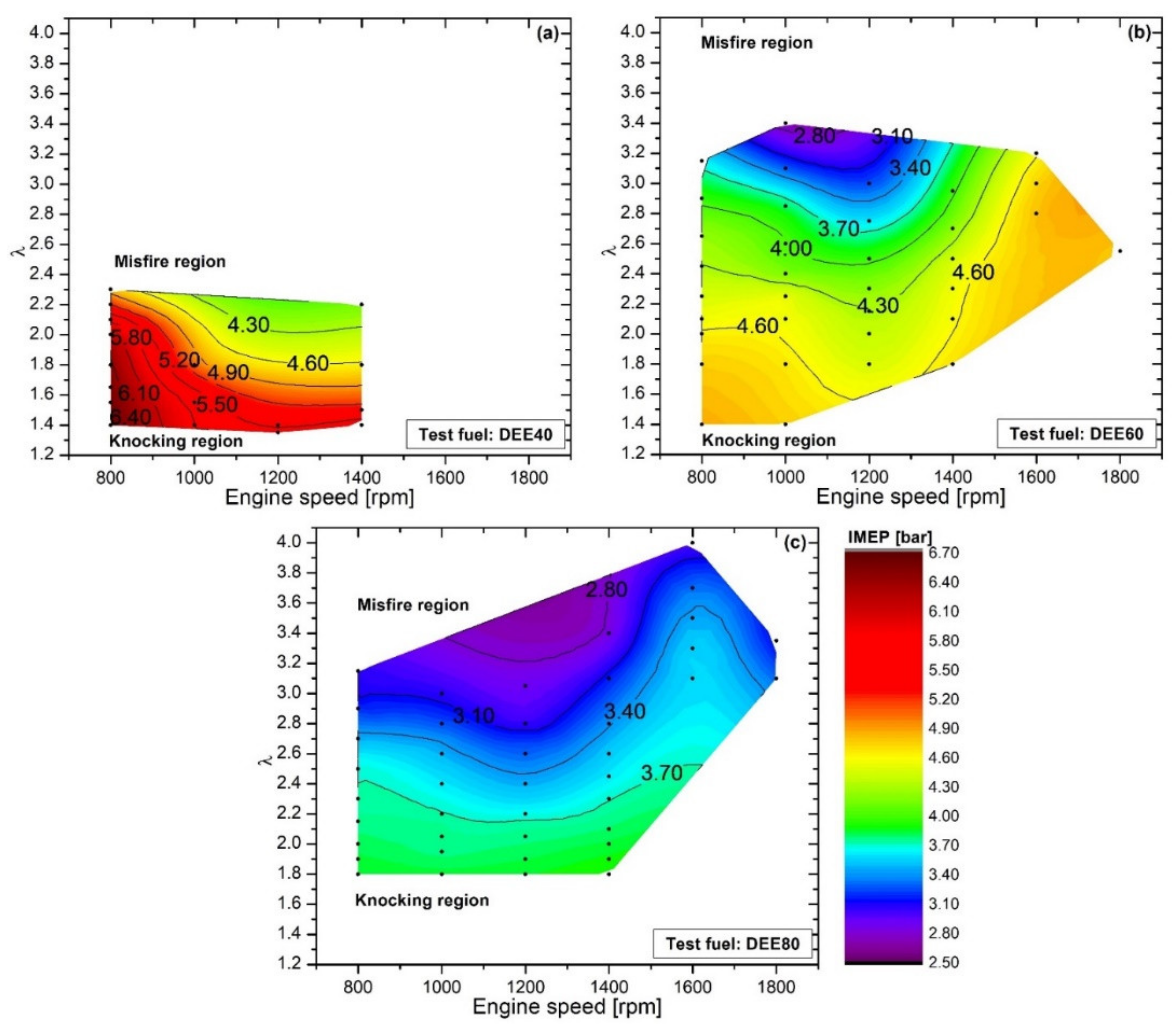 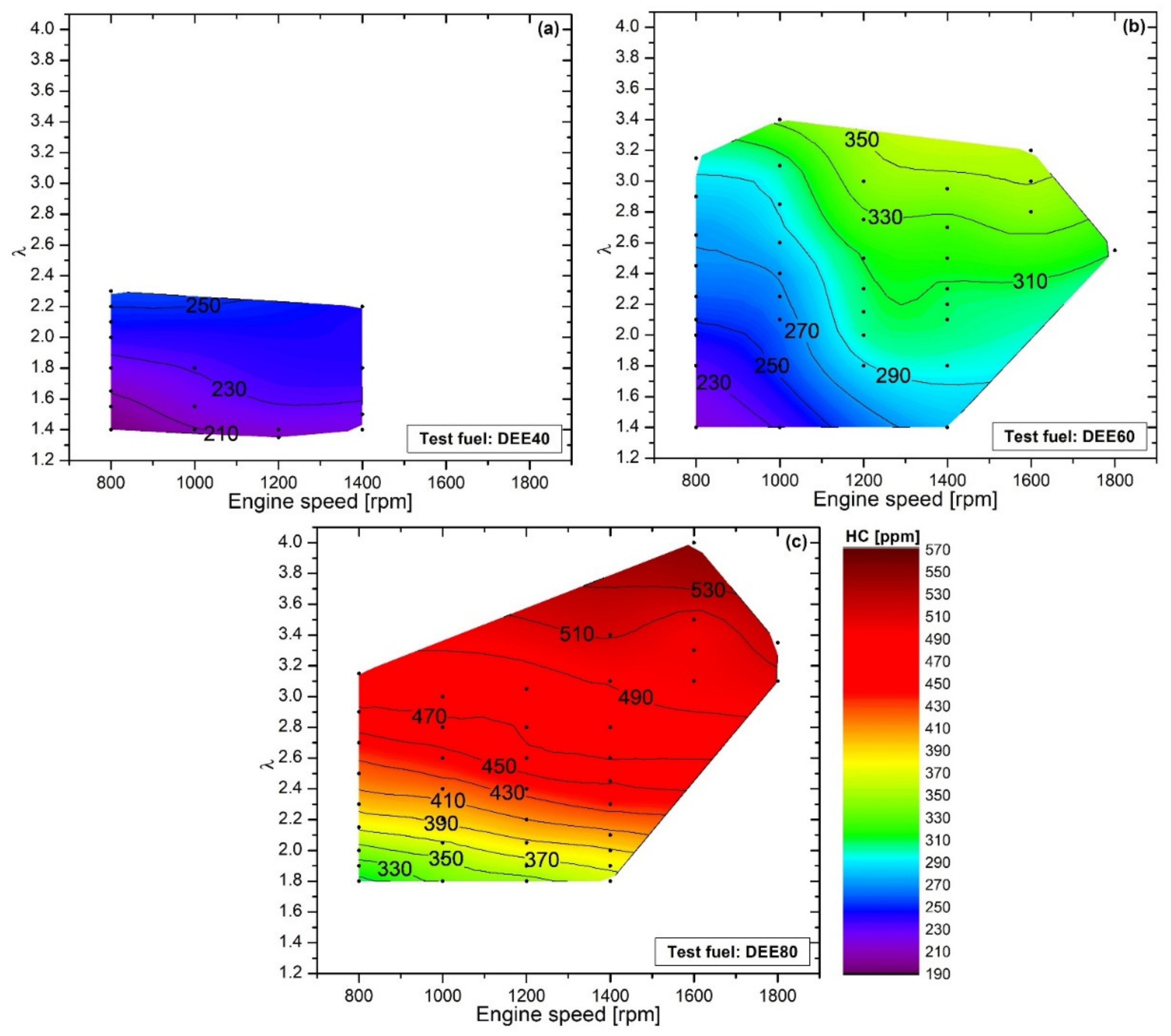 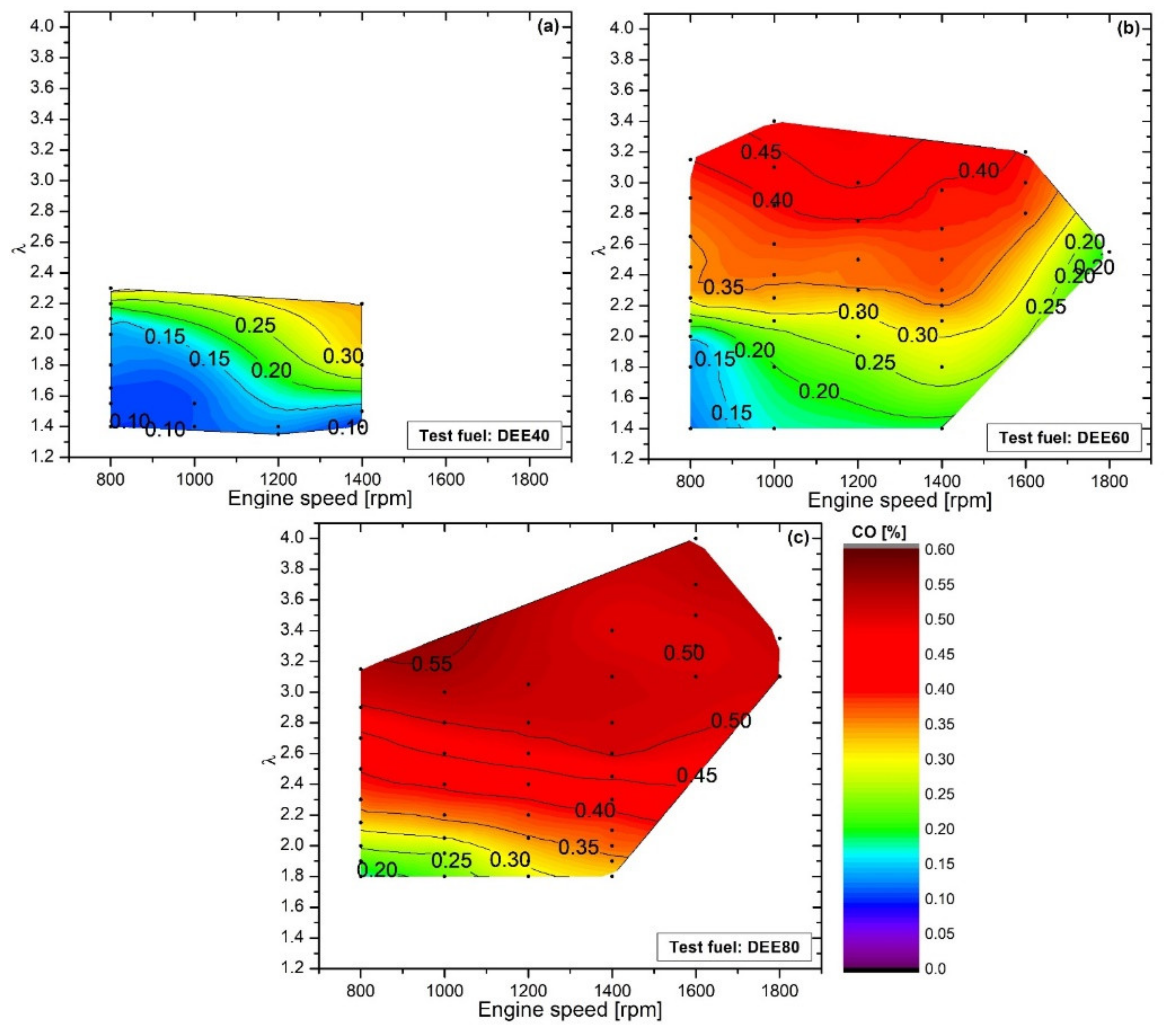