Power dividers (PDs) are essential devices commonly used in communication circuits. PDs are used for power division or combination in amplifiers, antennas, phase shifters, mixers, modulators, and frequency multipliers [1]. Dividers have been widely used in modern 5G communications circuits and systems— the specifications of sub-6 GHz, 5G applications are explained in [2,3]. In addition, the dividers can be integrated into the MIMO antenna applications [4,5].
Two common types of PDs in microwave applications are Wilkinson and Gysel. A typical Wilkinson power divider (WPD) has two long quarter-wave (λ/4) length branches with a 100 Ω lumped resistor between output ports. A Gysel power divider has six λ/4 length branches, and two 50 Ω lumped resistors. Both of these dividers are large (especially Gysel) and have undesirable harmonics. Several works have partially made improvements on these drawbacks in recent decades. Open-ended stubs were exploited to address the large size and undesirable harmonics in [1]. However, this method is simple: many open-ended stubs are needed to remove many harmonics, and each applied stub creates one narrow transmission zero, which helps the suppression band.
In some designs, the electronic band gap (EBG) cells [6,7] and defected ground structure (DGS) [8,9] are used to overcome these drawbacks of the standard dividers. An additional stage is needed for these two structures in the fabrication process, which results in the complexity of circuit design. Resonator cells [10,11,12,13,14] are widely used in the divider branches to create filtering responses, remove harmonics and reduce the length of the long branches. The applied resonators increase the insertion losses of the dividers, and all these mentioned power dividers suffer from high insertion losses.
In some research [15,16], coupled lines were used in the divider structure to suppress unwanted harmonics. With the applied coupled lines method, only signals at operating frequency were passed, and the signals at other frequencies were eliminated, which creates filtering responses. Unfortunately, the coupled lines method cannot improve the size of the circuit. For example, the size of both dividers in [15,16] is more significant than the typical divider. Recently higher frequencies for power dividers have been achieved using optical fiber substrates [17,18]. In addition, methods of optimization and artificial intelligence (AI) have been recently used to design power dividers and other microwave components [19,20].
Resonators are also used for performance improvement in the power dividers [21,22,23,24,25,26]. Different shapes of the resonators have been recently presented, such as U-shaped [21], T-shaped [22], Pi-shaped, [23] stepped impedance [24], and patch resonators [25,26]. In [25], patch resonators were used to design a filtering power divider. The circular divider was designed in [25], and a dual-band operation was achieved. However, the obtained suppression band was not wide enough, and the undesirable harmonics can pass through the divider. Patch resonators and meandered lines were used in [26] to design a radial filtering divider. An acceptable suppression band was obtained in [26], but the final size of the divider was larger than the typical structure. Moreover, artificial intelligence (AI) techniques [27,28,29,30,31] and optimization methods [32,33,34,35,36,37,38], which are useful tools, have been recently applied to design PDs and other microwave components [39,40].
All the discussed works in the literature have partially improved the large size and harmonic presence drawbacks of the typical power divider. However, the proposed work has solved these two drawbacks with the best results compared to the previous works, such that to the author’s best knowledge, the best size reduction and harmonic suppression are achieved simultaneously. This paper incorporates the LC lumped elements into proposed developed LC branches, which can be used instead of the power divider main branches. The proposed new branches have resulted in a compact design of the power divider with the desired percentage of miniaturization. In addition, a filtering response with a wide suppression band has been obtained for the proposed divider using the developed LC branches.

2. Structure of the Typical WPD

As depicted in Figure 1, the typical Wilkinson divider has two long λ/4 branches and a lumped 100 ohms resistor. The microstrip realization of the normal WPD is shown in Figure 2. This structure has a large size of λ/8 × λ/8. This large size is the first drawback of this typical divider.
An Agilent ADS simulator carried out the divider design, and the circuit simulator and electromagnetic (EM) simulator were carried out based on the Duroid5880 substrate with εr = 2.2 and 0.508 mm thickness.
The typical WPD frequency response is depicted in Figure 3. The typical divider performs well at the operating frequency. Nonetheless, this structure passes unwanted signals at higher frequencies, like the desired signals at operating frequencies, without suppression.

As mentioned in the previous section, the typical divider not only has a large size but also suffers from undesirable harmonics. To overcome these drawbacks proposed LC branch is designed to provide a suppression band and miniaturize the circuit size. The proposed LC branch’s structure is shown in Figure 4. The developed LC branch has a very short length and provides a filtering response at the desired frequency.

The typical and proposed branches should have the same response at the operating frequency. Thus, the ABCD matrix of these branches should be equal. The main λ/4 branch line has one microstrip line, and the ABCD matrix for this part is demonstrated with MMB. The proposed branch line has two microstrip lines with an electrical length of θ1 and a series of lumped components. The ABCD matrix for the first part is noted with M1, and the ABCD matrix for the series lumped elements is noted with MLMP.
As mentioned, the ABCD matrices of the proposed LC branch and normal branch should be equal; therefore, the equation is written in (1):
The values of M1, MLMP, and MMB are written in Equations (2)–(4):
The applied inductor in the proposed branch consists of two series inductors of L0 and Lm. The Lm with two adjacent transmission lines creates a composite line, which provides a miniaturization of the power divider. The L0C0 is tuned at the central frequency (f0), as illustrated in Figure 5. Therefore, the MLMP matrix can be written in the analysis at the central frequency as (5).
By solving Equation (1) and substituting Equations (1)–(5), Equations (6)–(9) can be written:
From Equations (7) and (8), Equation (9) is achieved as follows:
By solving Equation (9), the normalized value of Z1 can be calculated as written in (10):

The design process of the proposed divider is depicted in Figure 8. At first, a typical WPD at 900 MHz, with a large size, is designed. The first design of WPD is proposed according to the analysis, which has an 82% size reduction. The length of the proposed transmission line is obtained analytically. Finally, the optimized WPD is presented and fabricated with a 92% size reduction.

6.2. First Design of the Proposed WPD without Optimization

In the second step, two proposed developed LC branch lines, designed in Section 5 with calculated dimensions, are used instead of the long branches of the typical divider. The proposed WPD is depicted in Figure 10. The overall size of the proposed WPD is 13.9 mm × 15.3 mm, which offers an 82% reduction in size compared to typical WPD. In the simulation process, some values are tuned to have better results. The obtained values from analysis, simulation and measurement are listed in Table 1.
The first design of the proposed WPD response at the main frequency is shown in Figure 11a. These parameters at a wide frequency range are depicted in Figure 11b. This divider performs correctly at 900 MHz and suppresses the 2nd to 45th unwanted harmonics with a high level of attenuation.

6.3. Second Design of the Proposed WPD with Improvement

A 900 MHz WPD, with excellent size reduction and harmonics suppression, is designed, analyzed, and implemented in this paper. In this WPD, compact proposed series LC branches are used instead of the long microstrip lines in the typical WPD, which leads to excellent compact size, filtering response, and performance improvement. The designed WPD has a 92% size reduction compared to the typical WPD and suppresses the 2nd to 45th unwanted harmonics. The proposed WPD has the most compact size and best suppression band, which have been reported up until now. In this paper, the WPD is initially designed analytically, then simulated with ADS software, and the proposed device is fabricated at the end. All of the calculated, simulation and measured values have good agreements, confirming the proposed design’s validity.

The authors would like to thank the Kermanshah Branch, Islamic Azad University, for the financial support of this research project.

All the material conducted in the study is mentioned in the article.

The authors would like to thank the Kermanshah Branch, Islamic Azad University, for the financial support of this research project. 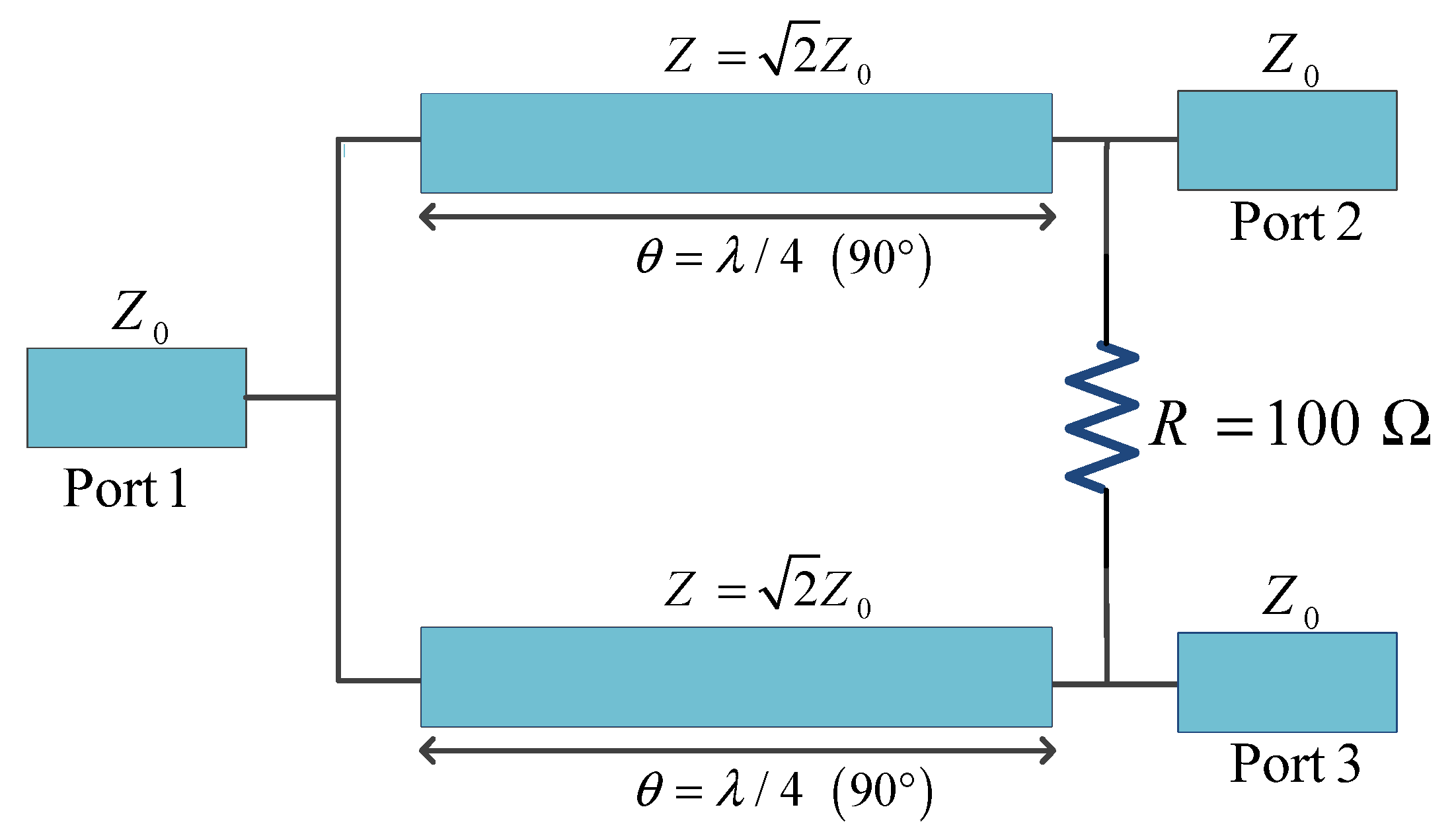 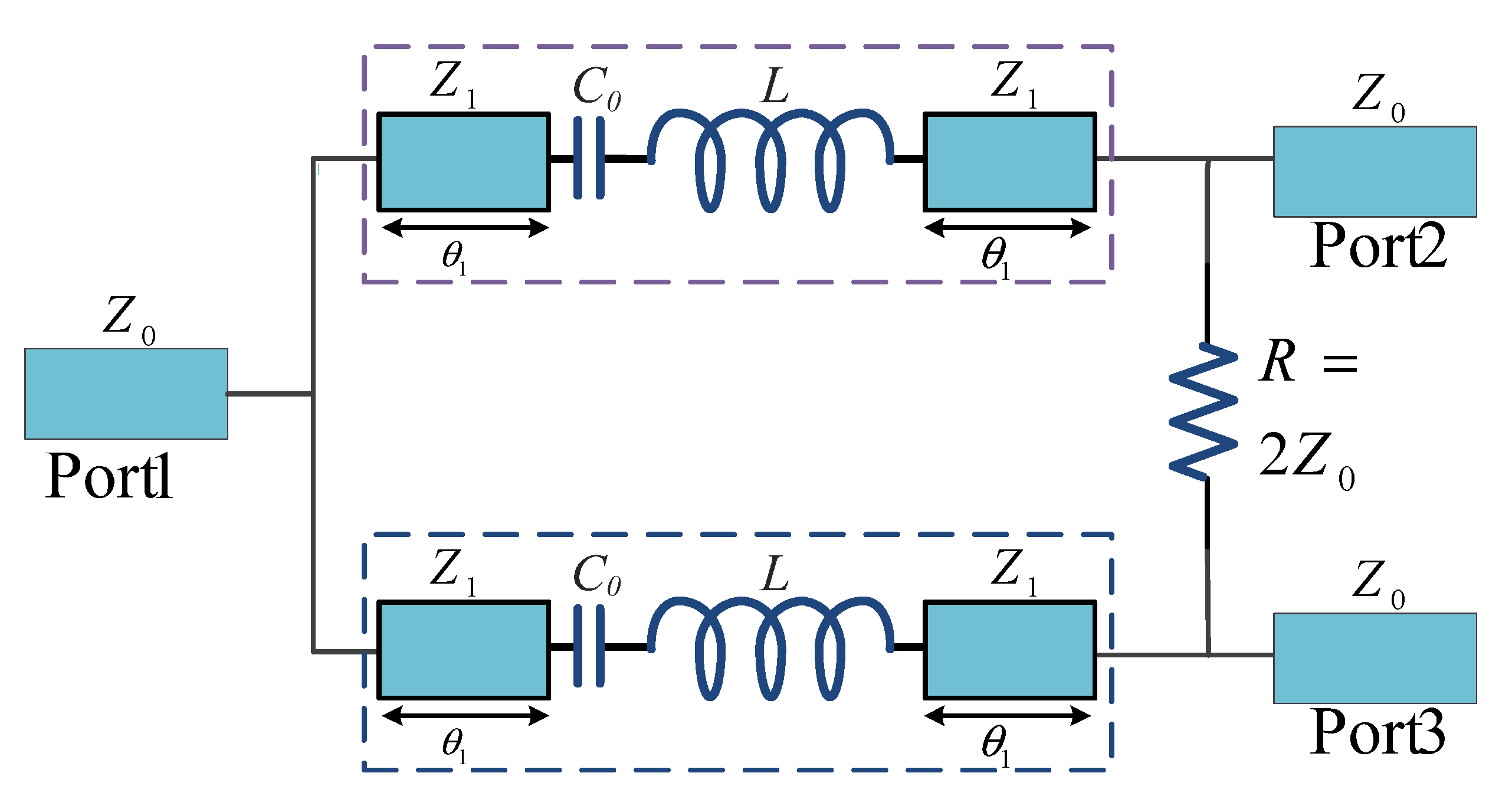 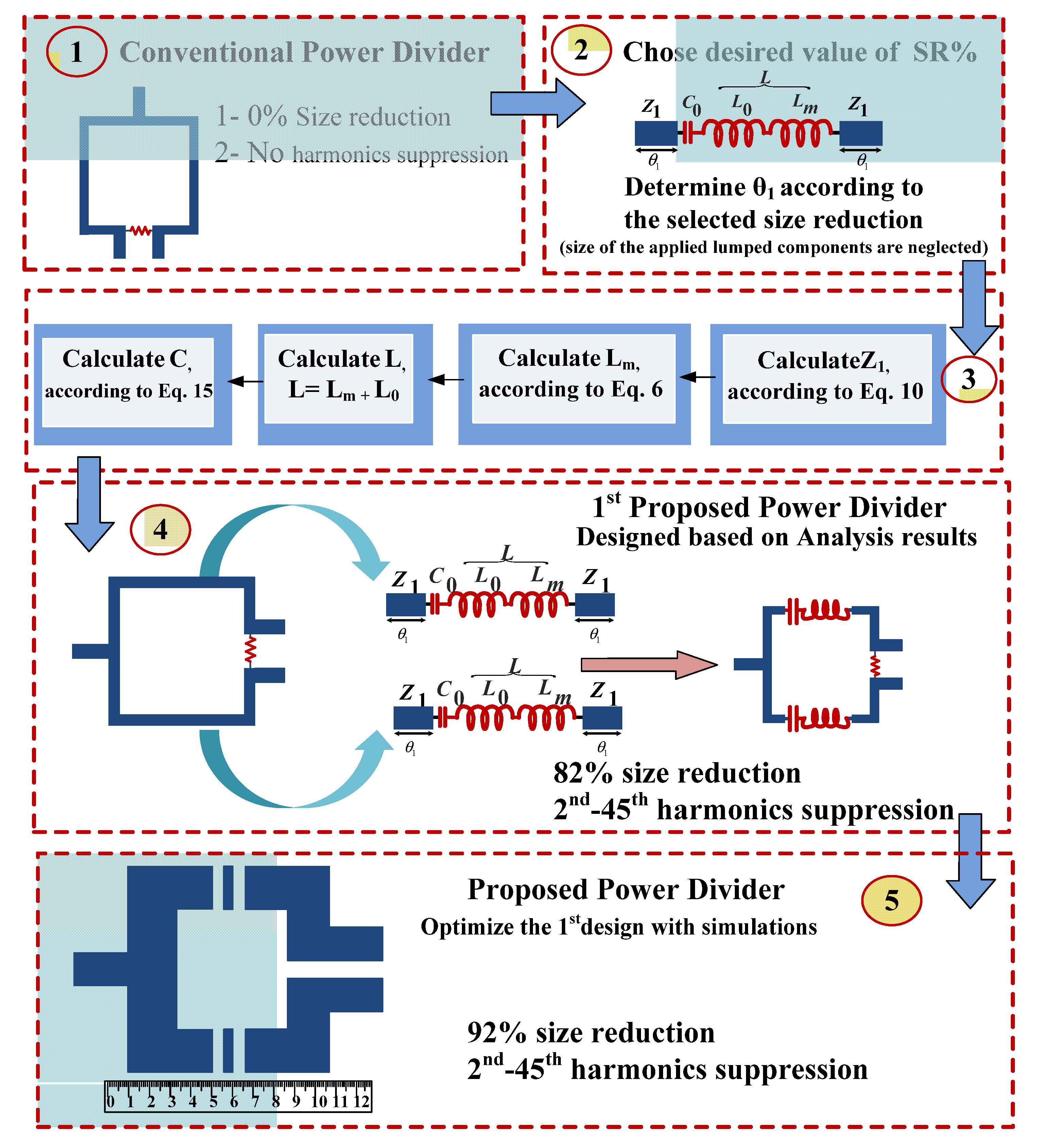 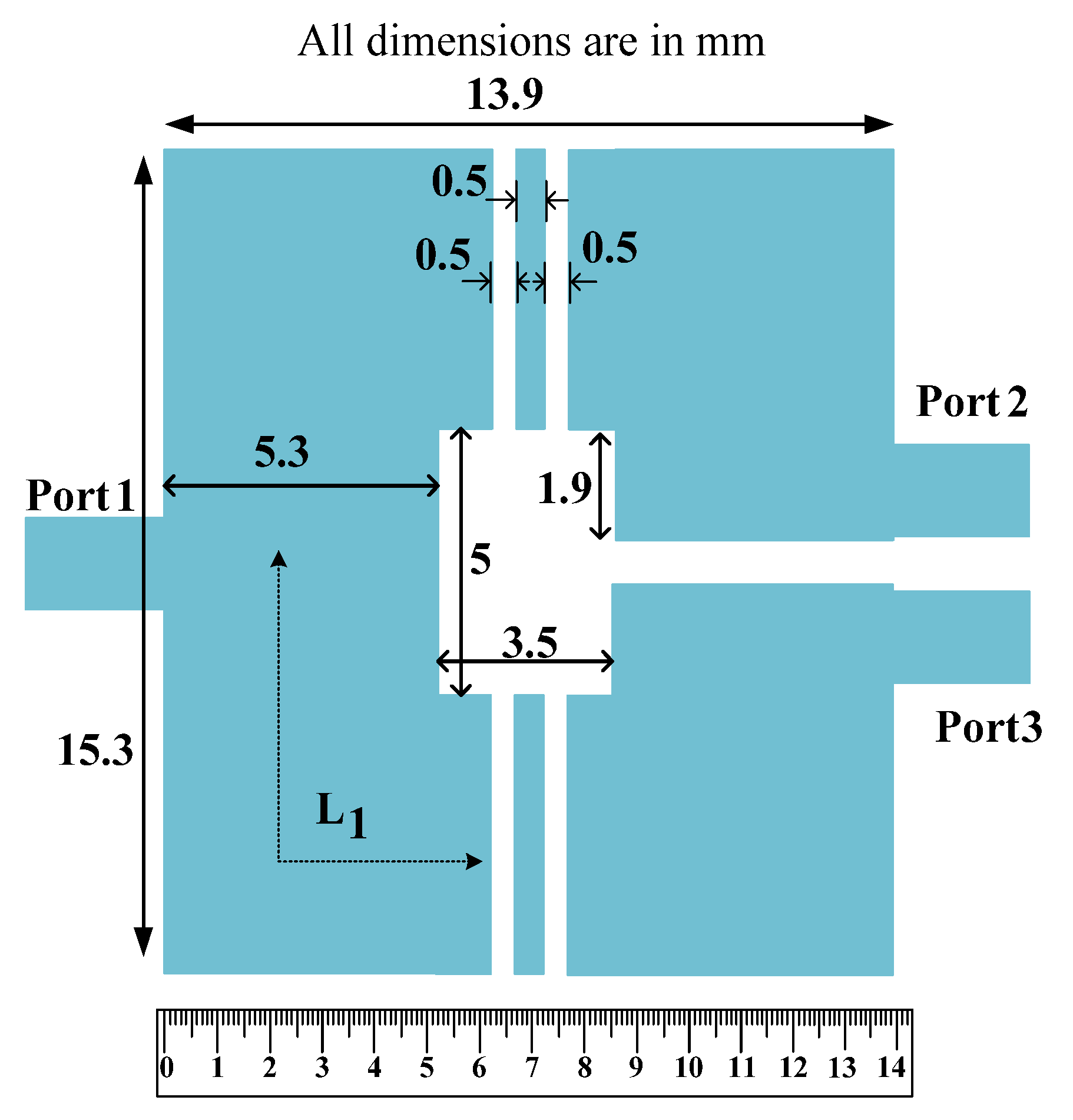 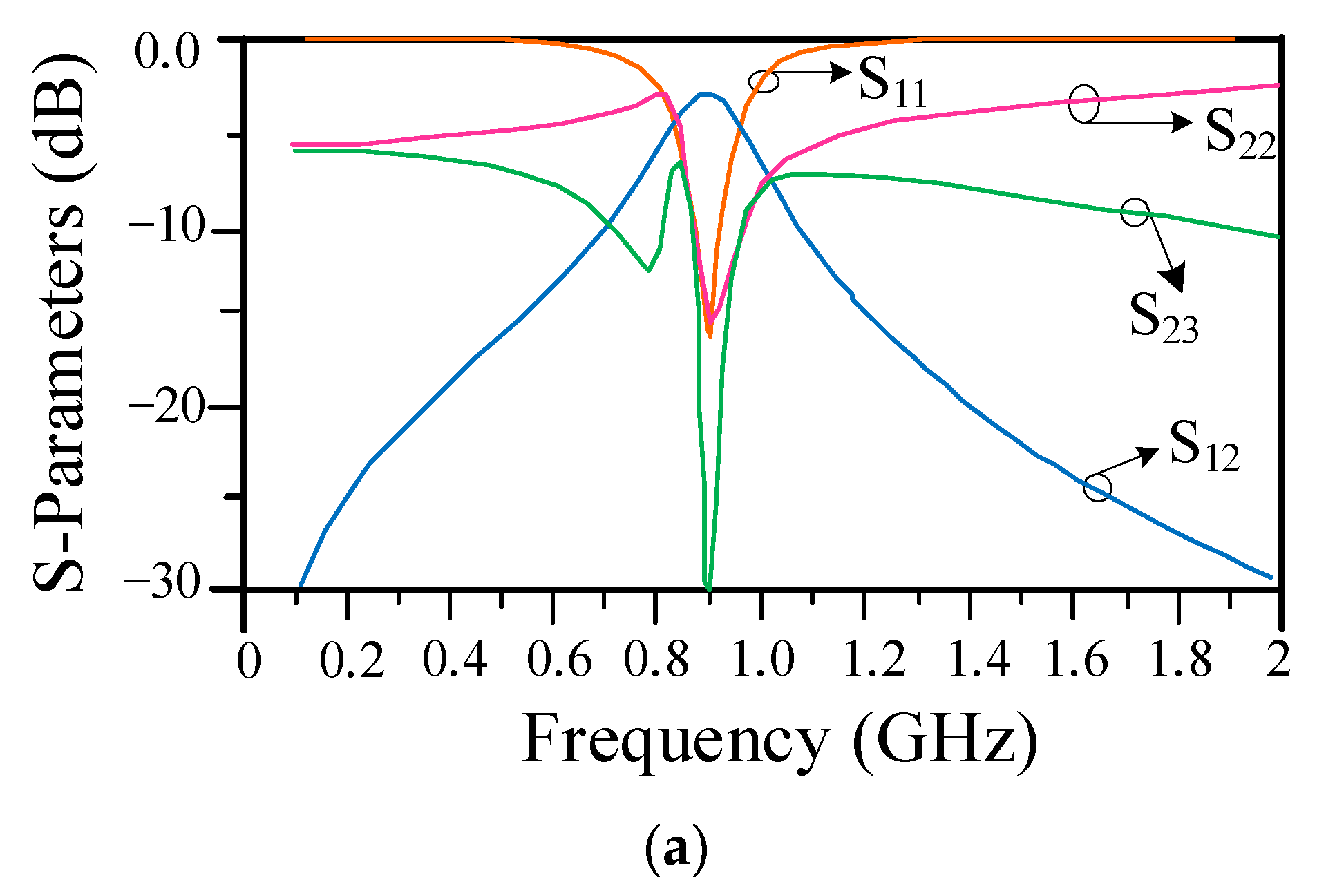 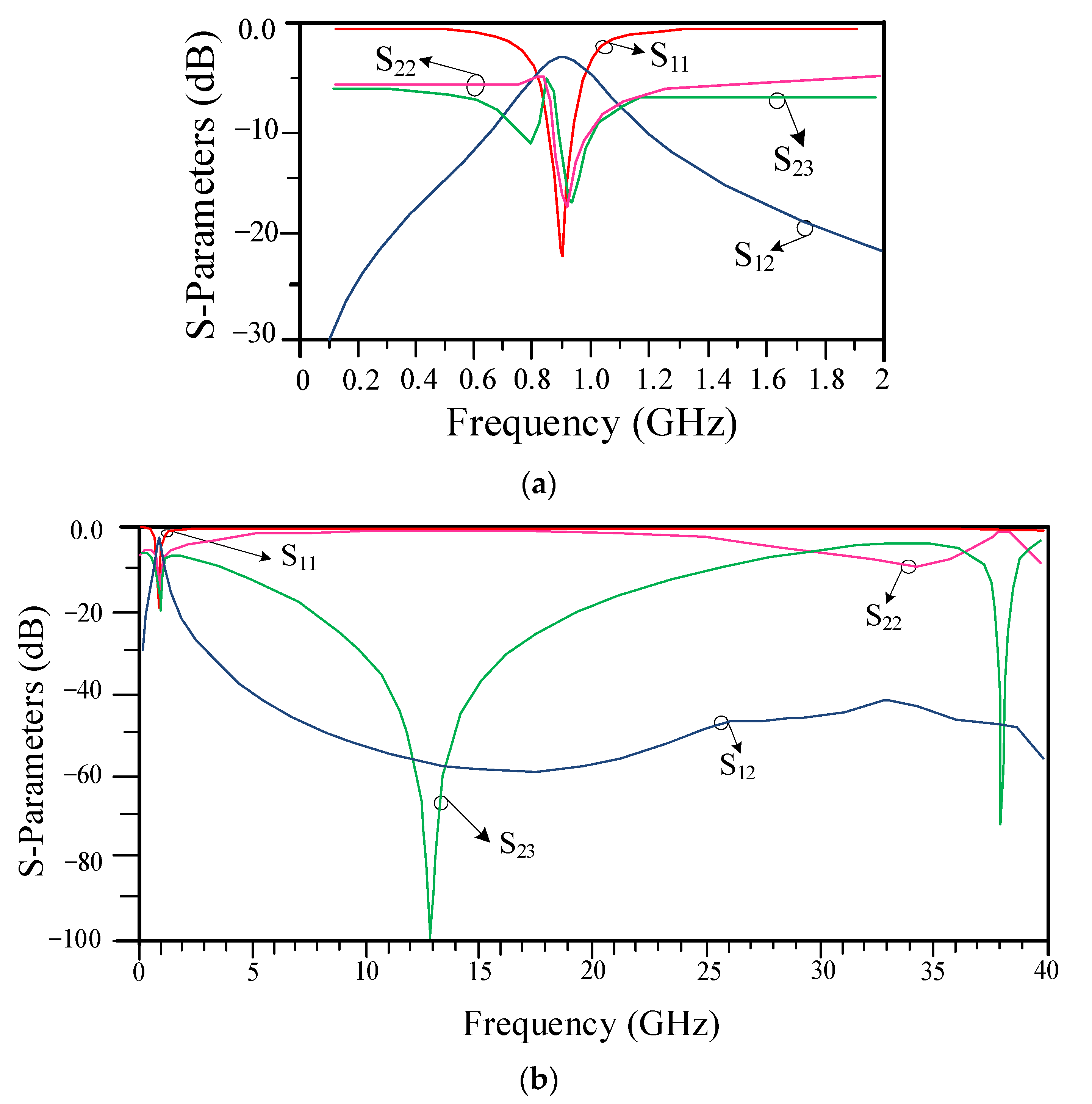 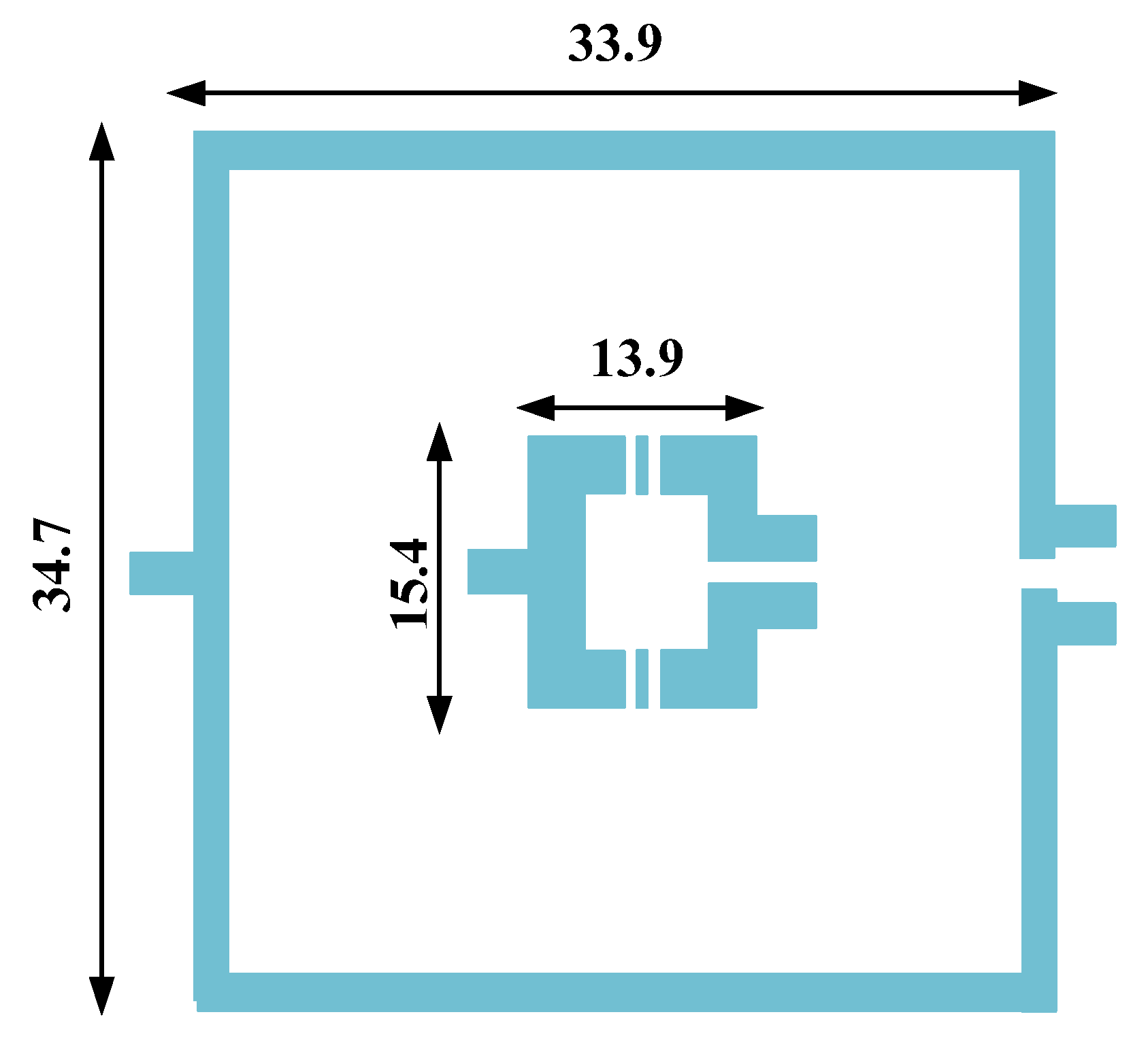