Travel Motivation during COVID-19: A Case from Nepal
Next Article in Special Issue

This study analyzes pedestrian crash counts at more than one million intersections and midblock segments using Texas police reports over ten years. Developing large-scale micro-level analyses is challenging due to the lack of geographic information and characterization at a statewide scale. Therefore, key contributions include methods for obtaining many points and related variables across a vast network while controlling for traffic control variables (signalized intersections), highway design details, traffic attributes, and land use information across multiple sources. The analytical framework includes a method to estimate the intersection and midblock segments’ geometry and characteristics, data processing of historical pedestrian crashes and mapping to the estimated geometry, and the development of predictive models. A negative binomial model for crash counts across the state of Texas and within the city of Austin suggests that signalized intersections, arterial roads, more lanes, narrower or non-existent medians, and wider lanes coincide with higher crash rates per vehicle-mile traveled (VMT) and per walk-mile traveled. The analysis suggests that daily VMT increases the likelihood of pedestrian crashes, and midblock segments are more vulnerable than intersections, where one standard deviation increase in VMT caused an increase in crashes at intersections and midblock sections of 52% and 187%, respectively. Furthermore, the number of intersection crashes in Austin is higher than in the rest of Texas, but the number of midblock crashes is lower. Analysis of the Austin area suggests that the central business district location is critical, with midblock crashes being more sensitive (240%) in this area than intersection (78%) crashes. Moreover, a significant inequity was found in the area: an increase of USD 41,000 in average household income leads to a reduction of 32% (intersections) and 39% (midblock) in pedestrian crash rates. View Full-Text
Keywords: pedestrian crashes; intersection safety; midblock crashes; roadway inventory; negative binomial crash count models pedestrian crashes; intersection safety; midblock crashes; roadway inventory; negative binomial crash count models
►▼ Show Figures 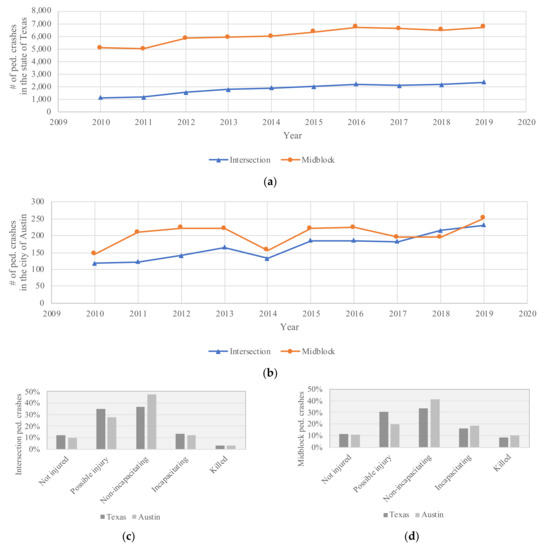