When population abundances exceed the economical or ecological threshold, animals are always regarded as pests, so effective and sustainable management strategies are required. As a native species widely distributed on Tibetan Plateau, plateau pika is regarded as a pest when its abundance is too high. For decades, plateau pika were controlled using toxic baits by both the local government and shepherds. However, how pika population fluctuates after lethal control is far from certain. Based on our previous studies, demographic parameters of plateau pika were acquired. A system dynamics model is developed to parameterize a population model for this species. The model incorporates two age categories (juvenile and adult) of both sexes, and uses density-dependent factors, including reproduction, mortality, and migration. The model is used originally to analyze the effect of pika management on the population dynamics and resulting abundance, in order to plan optimal pest controlling strategies. The results show that lethal control is efficient when continuously conducted once each year, or twice with 2-year intervals. For sustainable controlling pest abundance, comprehensive strategies should be considered. An appropriate population model could be used to explore the optimal strategies and provide important reference into decision making about pest management. View Full-Text
Keywords: alpine meadow; rodent; pest management; plateau pika; population dynamics alpine meadow; rodent; pest management; plateau pika; population dynamics
►▼ Show Figures 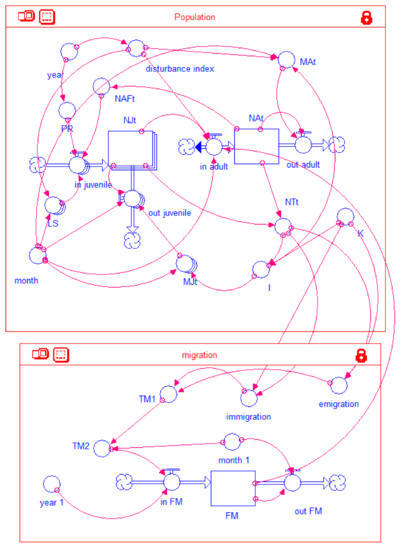