The search for renewable energy supplies for today’s global energy demand, particularly ocean wave energy for coastal areas, has become undeniably widespread in the last two decades. The Caspian Sea represents an immense opportunity for using ocean renewable energy, especially considering its long shoreline. In this study, the locations with maximum potential wave energy were chosen in the central, eastern, and western zones of the Caspian Sea’s southern coasts. Accordingly, the wave and bathymetric data were used as the input to calculate the oscillating surge wave energy converter’s flap geometric dimensions based on previous studies. Then, the geometric model was designed, and then the wave energy converters were modeled in the Wave Energy Converter Simulator (WEC-Sim) module in the MATLAB software. Furthermore, eight models in each sea state were simulated to find the best value of the PTO damping coefficient, which led to the highest capture factor. Finally, all the external forces on the WEC’s flap and the converter’s power output results were compared, taking into account the effects of the flap height on the total power output. It was found that Nowshahr port has more potential than the Anzali and Amirabad ports, as the converter’s absorbed power proved to be 16.7 kW/m (Capture factor = 63%) at this site. Consequently, by conducting a comparative analysis between the selected sites, the excitation, radiation damping, and power take-off forces were scrutinized. The results show that the highest applied forces to the converter’s flap occurred at Nowshahr port, followed by the Anzali and Amirabad ports, due to the directional characteristics of the waves at the central coasts of the Caspian Sea. View Full-Text
Keywords: wave energy conversion; wave models; Caspian Sea; WEC-Sim; OSWEC wave energy conversion; wave models; Caspian Sea; WEC-Sim; OSWEC
►▼ Show Figures 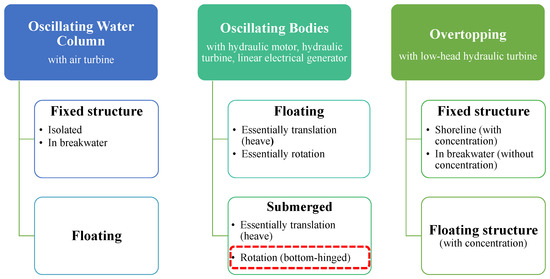