International Trade in Transport Services between Poland and the European Union

Jacek Zarzycki
Department of Machinery Engineering and Transport, Faculty of Mechanical Engineering and Robotics, AGH University of Science and Technology, 30-059 Cracow, Poland
*
Author to whom correspondence should be addressed.
Sustainability 2021, 13(1), 437; https://doi.org/10.3390/su13010437
Received: 18 November 2020 / Revised: 22 December 2020 / Accepted: 30 December 2020 / Published: 5 January 2021
(This article belongs to the Special Issue Diagnostics and Nondestructive Testing as an Important Factor of Sustainability)

This publication presents the results of laboratory tests of idler rolling resistance under operational loads. Operational loads are understood as radial and axial forces acting on the idler, with values corresponding to those that occur in the conditions of its operation in copper ore mines. Knowing the rolling resistance is important not only at the stage of conveyor design, selection of the drive power or calculations of the necessary belt strength, but also when improving and searching for new idler design solutions. The idlers adopted for this research were differentiated in terms of bearings and idler axial clearance. The investigations were carried out on a unique test stand designed and built by the authors. The construction of the stand enables simulating operational loads while measuring the rolling resistance. The test rig measures idler bearing losses and rolling drag, not belt indentation rolling resistance. The object of the research were ø133×465 idlers, which are most commonly used in the raw materials industry. The results show the possibility of reducing the belt conveyor energy consumption by appropriate selection of the design features of the idler bearing unit.
Keywords: belt conveyor; carrying idler; rolling resistance; energy consumption; energy saving solutions belt conveyor; carrying idler; rolling resistance; energy consumption; energy saving solutions

Idler rolling resistance under load with radial and axial forces was tested on a special stand developed by the authors of this study. The general view of the test rig is shown in Figure 1. The stand is dedicated to testing idler rolling resistance under load, especially with radial operational load up to 5 kN and axial load up to 0.5 kN. The stand enables the testing of idlers with the casing diameters ranging from 108 to 259 mm and the casing length up to 1200 mm. The construction of the stand also allows for tilting the frame so that it is possible to reproduce the work of the trough roller inclined to the angle of 45°.
The test rig only applies to testing individual idler rolls, and not 2, 3 or 5 idler roll sets commonly used to support the carrying trough of actual belt conveyors. Since the test rig measures axial load resistance, its application to flat idler rolls in 35 degree (or any other angled trough) troughed sets will need to be considered and adjusted in the results, so that a designer may use the data in a real situation.
The photo in Figure 2 shows a fragment of the test stand with a visible idler and a system for driving and exerting a load with a toothed belt.
The idea behind the measurement is that the tested idler (1) is mounted in a rigid frame (2), which is pivotally supported (3). The drive and setting of the radial load are effected by means of a toothed belt with high strength (4).
The diagram showing the method of exerting loads and determining the forces is presented in Figure 3. The axial load is applied through the contact of the idler with the hub in the idler axis (Figure 3b). During measurements, the reaction force F acting on the frame on the arm e is recorded as well as the radial force Q loading the idler as the sum of forces in both supports P1 and P2. Idler rolling resistance W is calculated from dependence (1): where F is the force measured with a force sensor, d is the idler diameter and e is the arm of force F.
Force F is measured with a force sensor within a measuring range of 100 [N] and a cumulative error of ≤0.20%. The frequency of recording force F was 1 [kHz] and the measurement precision ±0.13 [N].
The axial force FA is exerted by means of a lever mechanism with a pressure roller. Owing to this solution, the axial force applied to the idler hub does not disturb the measurement of the idler rolling resistance force. This system is shown in Figure 3b. The leverage system with a ratio of 3:1 was equipped with a spring dynamometer, which enabled controlling the applied axial force.

3. Course and the Results of the Tests

The following independent variables were adopted for the testing of idler rolling resistance:
The values of the above parameters were selected so as to reflect the operational load affecting the idler when it is working on a real conveyor.
All the idlers were run-in in accordance with the standard requirements. Before the tests, each idler rotated for a minimum of 30 min in order to warm up the bearing units, which guaranteed repeatability of the results.
For each idler, tests of its rolling resistance were carried out in two series:
Each series consisted of 10 trials for each idler. The trial was divided into 5 time sequences lasting a total of 40 s. At the beginning, data recording was started; then, after 5 s, the idler drive was turned on and for another 10 s the rolling resistance was recorded only under the radial force load. From the 15thsecond of the test, the roller causing the axial force was in contact with the idler, but no axial force was applied. The purpose of this was to check whether the roller rotation resistance disturbed the measurement of the idler rolling resistance, which was assessed during the measurement results analysis. Between the 20th and 30th second of the test, an axial force was applied in addition to the radial force. After 30 s, the axial force load was removed, and at the 35th second, the idler was stopped; after another 5 s, data recording was completed. The diagram of idler loading is shown in Figure 4.
The measurements enabled obtaining a record of the idler rolling resistance force over time, which was variable depending on the radial and axial force in both directions of the idler casing rotation.
The rolling resistance was determined on the basis of the average value calculated for 5 s of idler operation without and with axial force load. An example of changes in idler rolling resistance is shown in Figure 5.
The influence of changes in the axial force on the value of rolling resistance was assessed on the basis of the kWX coefficient, which was defined as the coefficient of change in rolling resistance per 100 N increment of the axial force. For example: with kWX = 1, an increase in the axial force by 250 N will cause the resistance to increase by 2.5 N. The coefficient may have negative values. The course of the change in the value of the kWX coefficient depending on the increase in the axial force is shown in Figure 6.
During the tests, the reaction forces acting on the idler supports in the direction of the X, Y and Z axes were recorded in accordance with the markings shown in Figure 7. The reaction forces measured in both supports were derived from the radial and axial forces acting on the idler.
The recorded courses of changes of the reaction forces RX, RY and RZ were used to determine the radial and axial forces acting on the idler casing. The course of changes in the radial and axial force during a single test is shown in Figure 8.
The object of the research was a series of 12 ø133 × 465 idlers having a steel structure with a cast iron hub. The idlers differed from each other in the type and manufacturer of the bearing as well as the value of the axial clearance. In the tested idlers, 6305 ball bearings were used. The X-bearings were of low quality, while the Y-bearings were of high quality from a reputable manufacturer. Idlers 1 to 6 were equipped with bearings of C3 clearance class, and idlers 7 to 12with bearings of C4 clearance class. Three values of axial clearance L1, L2 and L3 were used in the tested idlers, where L1 < L2 < L3. Table 2 lists the markings with the parameters of the tested idlers.

The research carried out by the authors of this study was aimed at determining what energy effects can be brought about by making relatively simple changes in the idler structure. An important aspect of the investigations into idler rolling resistance was conducting them under loading conditions that occur during operation. Therefore, idlers were subjected to radial and axial loads.
The presented results of the laboratory tests show that the condition of idler load has a significant impact on its motion resistance. Idlers loaded with both radial and axial forces can have more than 2.5-times greater rolling resistance than those loaded only with the radial force, which is important for the design of belt conveyors.
This research has also revealed that appropriate selection of, in particular, idler bearings, enables obtaining measurable effects in the form of lower energy consumption of the belt conveyor. The calculations based on the research results in the QNK-TT program have demonstrated that the power consumption by the drive of an exemplary conveyor, typically used in copper ore mines, can be reduced by approximately 10% by using bearings with C4 instead of C3 clearance in idlers. Considering the scale of application of belt transport in the global raw materials industry, this is an important piece of information.
The graph presented in Figure 16 shows the effect of idler rolling resistance on the power consumption of an exemplary belt conveyor. It indicates that lowering the rolling resistance of each idler by 1N reduces the energy consumption of the loaded conveyor by 4%.
In terms of their structure, idlers are relatively simple components of the belt conveyor. However, the number of idlers installed in the conveyors makes them a significant source of resistance to motion, and, in consequence, the power consumption of the conveyor drive. At the same time, idlers are still potential reserves for reducing the energy consumption of belt transport [15,16]. Improving the energy efficiency of the belt conveyors is an important field for researchers and engineers [17,18], and the results presented in this publication provide a significant contribution to that field. The authors of this study have demonstrated that simple, low-cost changes to the idler structure can result in noticeable effects increasing the efficiency of belt transport. Safe and efficiently implemented belt transport processes are an important aspect of the sustainable development of the raw materials industry. 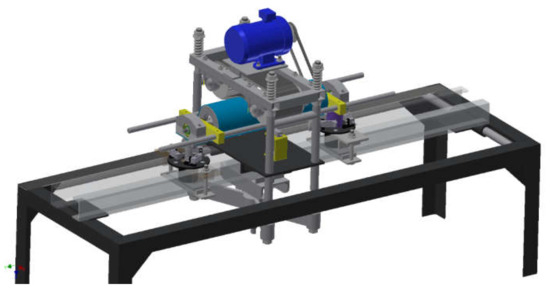 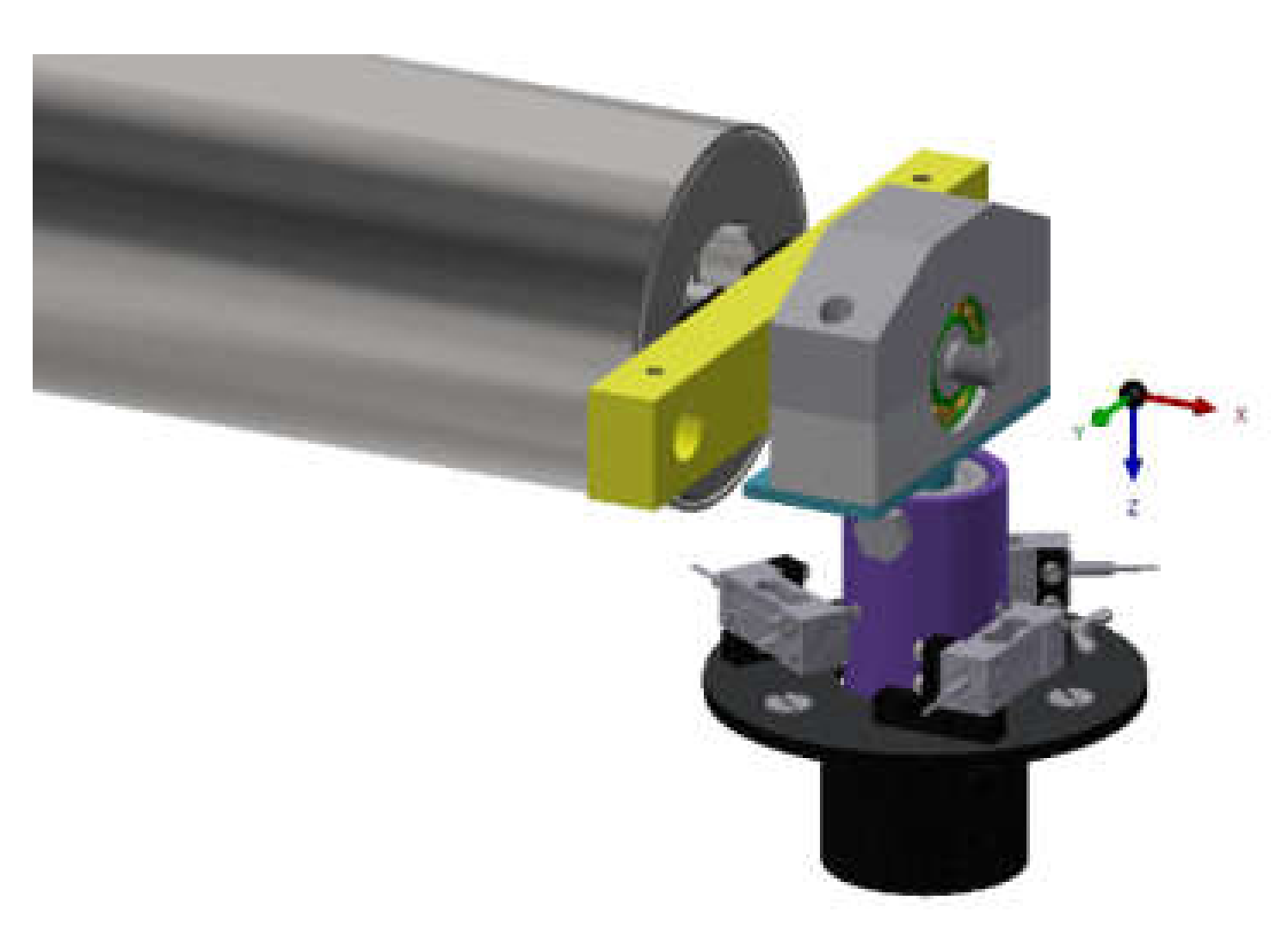 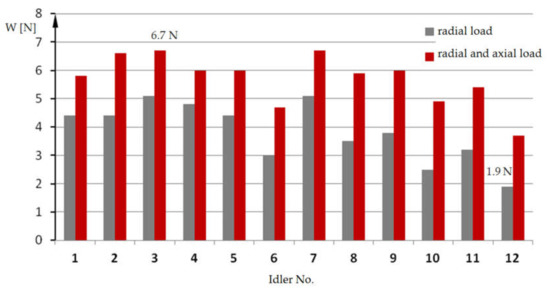 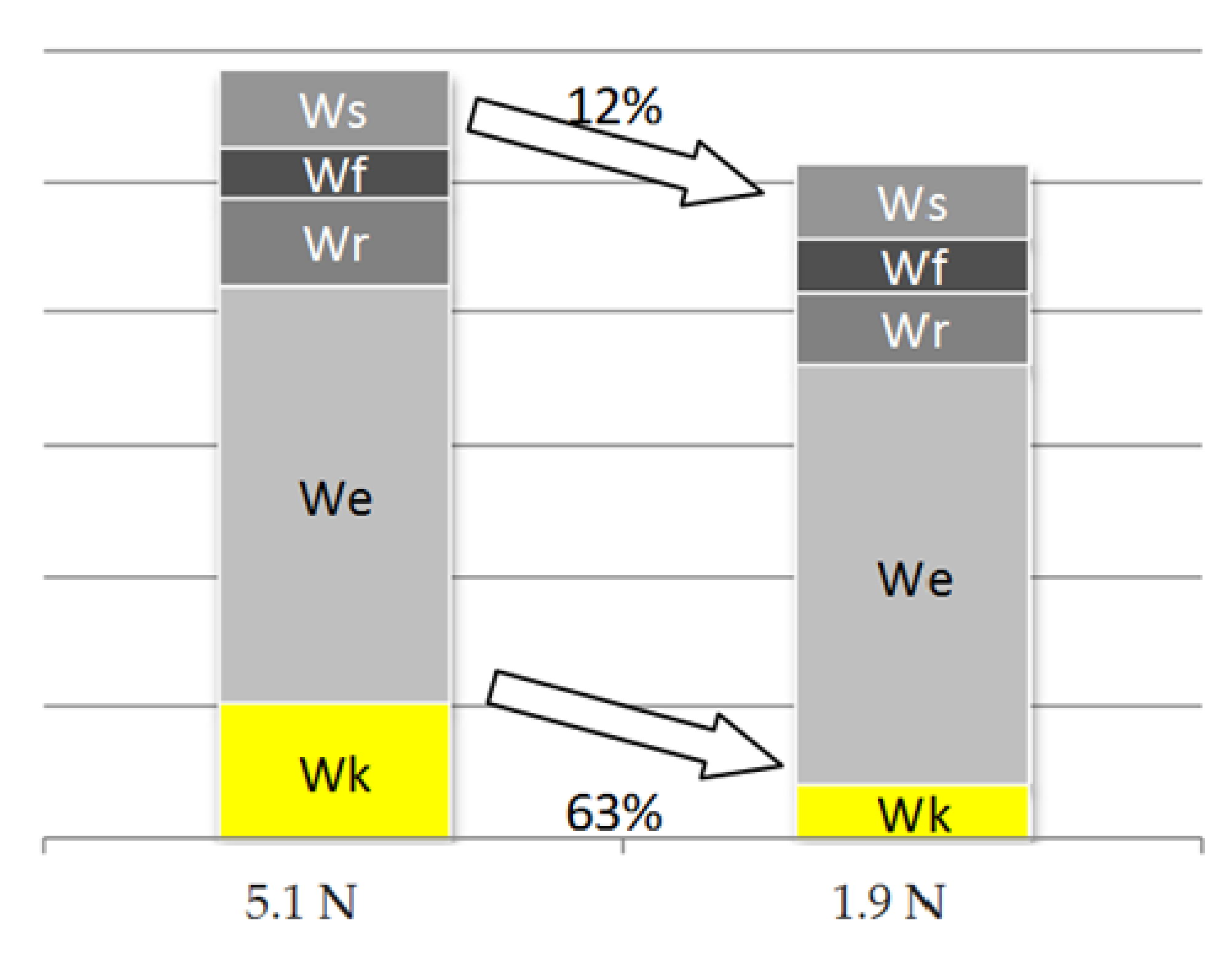 Table 3. Parameters of an exemplary conveyor.
Table 3. Parameters of an exemplary conveyor.
© 2021 by the authors. Licensee MDPI, Basel, Switzerland. This article is an open access article distributed under the terms and conditions of the Creative Commons Attribution (CC BY) license (http://creativecommons.org/licenses/by/4.0/).
We use cookies on our website to ensure you get the best experience. Read more about our cookies here.
Accept
We have just recently launched a new version of our website. Help us to further improve by taking part in this short 5 minute survey here. here.
Never show this again