Economic Complexity and Ecological Footprint: Evidence from the Most Complex Economies in the World

This research builds on the regional innovation literature, and aims to better understand the potential for, and development of, low-carbon technologies in the European Union. Exploiting the OECD’s REGPAT for regionalised patent data, we estimate the potential advantage of European NUTS2 regions have in 14 green technologies. We use network proximity between technologies and between regions to understand technological/regional clusters of revealed technological advantage and build the regressors for estimating regional potential advantage in specific technologies via zero-inflated beta regressions. Based on this, we explore the region-technology networks, finding two gravity centres for green innovation in France’s and Germany’s industrial and high-tech hubs (Île de France, Stuttgart, and Oberbayern). We also construct a dataset of lagged potentials and labour market, economic and demographic variables, and perform an elastic net regularisation to understand the association with current revealed advantages. Our approach indicates an association between technological advantage in green technologies and the (lags of) participation rates in labour markets, sectoral employment in science and technology, general higher education, duration of employment, percentage of GDP spent on R&D (public and private) and other expenditure on R&D. If confirmed by causality tests, the established associations could help in designing horizontal economic policies to enable specific regions to realise their specialisation potential in specific green technologies. View Full-Text
Keywords: sustainable growth; regional innovation; technological relatedness; green industrial policy; product space; smart specialisation sustainable growth; regional innovation; technological relatedness; green industrial policy; product space; smart specialisation
►▼ Show Figures 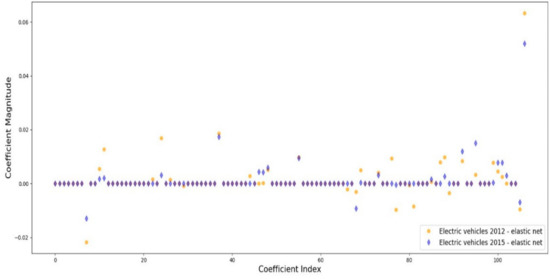