How Much Lighting is Required to Feel Safe When Walking Through the Streets at Night?

Public space lighting (PSL) is indispensable after the natural dark. However, little is known about how much PSL people actually need to feel sufficiently safe in different real-world urban settings. The present study attempts to answer this question by employing a novel real-time interactive approach, according to which, observers use a specially-designed mobile phone application to assess and report the perceived attributes of street lighting and the feeling of safety (FoS) it generates. To validate the proposed approach, a systematic survey was conducted in three cities in Israel—Tel Aviv-Yafo and Haifa, which lie on the Mediterranean coast, and Be’er Sheba, which lies inland. Additionally, instrumental PSL measurements were performed at the same locations. As the study reveals, the necessary level of illumination required by urban residents to feel safe differs by city and is significantly higher in Be’er Sheba, other factors held equal, in compare to Haifa and Tel Aviv-Yafo. This difference may be attributed to stronger daylight that the residents of the desert city of Be’er Sheba are accustomed to, and, therefore, may prefer stronger nighttime illumination. The difference could also be related to the relatively low socio-economic status and somewhat higher crime rates in the latter city. Findings also show a significant and positive association between FoS and instrumentally measured PSL levels, although this association exhibits diminishing returns. To the best of our knowledge, the present study is the first to use an interactive location- and time-based mobile phone technology, which can potentially provide more accurate and reliable assessments, compared to traditional “pen and paper” survey techniques. View Full-Text
Keywords: Feeling of Safety (FoS); Public Space Lighting (PSL); interactive user-oriented approach; urban areas Feeling of Safety (FoS); Public Space Lighting (PSL); interactive user-oriented approach; urban areas
►▼ Show Figures 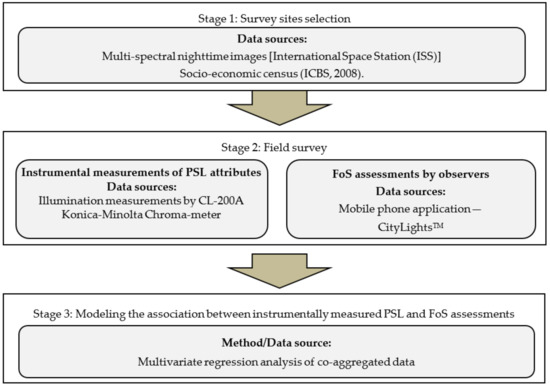