Do Higher-Rated or Enhancing ESG of Firms Enhance Their Long–Term Sustainability? Evidence from Market Returns in Korea
Previous Article in Special Issue

Digitalization of Agri-Cooperatives in the Smart Agriculture Context. Proposal of a Digital Diagnosis Tool

Senior volunteering is associated with improved welfare, in addition to contributing to social development. Thus, the involvement of seniors in non-profit organizations (NPO), the third sector, or the social economy is encouraged by European national governments. At the organizational level, the situation for older volunteers in the third sector has improved in recent years, mainly due to European legal regulations. Despite a certain degree of homogenization across European countries, significant national differences persist in the adoption and promotion of volunteering. The present study examines the link between self-reported health and participation in volunteering activities among European seniors, stratified by sex and generation (the Silent Generation and the Baby Boomer Generation). We focus our analysis on seniors living in Germany, Poland, Romania, Russia, Slovenia, Spain, Sweden, Turkey, and Ukraine. Analyses were conducted using empirical micro data from the World Values Survey (WVS; 1994/98, 2005/09 and 2010/14). Our results demonstrate the positive impact of volunteering on health status among the elderly, although we observed marked differences in the associated benefits between sexes, generational cohorts, and countries. Public policies should be developed with this important source of social capital in mind, but should also seek to address existing inequity. View Full-Text
Keywords: ageing; health; non-profit organizations; public policies; social economy; Sustainable Development Goals; volunteering; well-being ageing; health; non-profit organizations; public policies; social economy; Sustainable Development Goals; volunteering; well-being
►▼ Show Figures 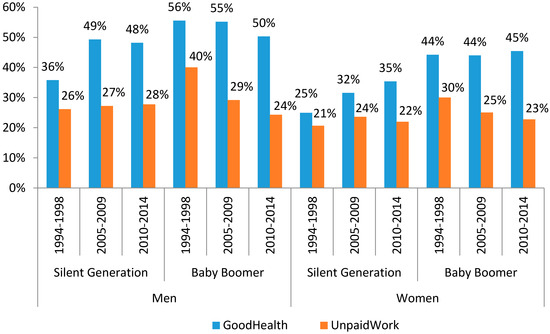