This study examined the impact of climate change on plant species diversity of a savanna ecosystem, through an assessment of climatic trends over a period of forty years (1974–2014) using Masvingo Province, Zimbabwe, as a case study. The normalised difference vegetation index (NDVI) was used as a proxy for plant species diversity to cover for the absence of long-term historical plant diversity data. Observed precipitation and temperature data collected over the review period were compared with the trends in NDVI to understand the impact of climate change on plant species diversity over time. The nonaligned block sampling design was used as the sampling framework, from which 198 sampling plots were identified. Data sources included satellite images, field measurements, and direct observations. Temperature and precipitation had significant (p < 0.05) trends over the period under study. However, the trend for seasonal total precipitation was not significant but declining. Significant correlations (p < 0.001) were identified between various climate variables and the Shannon index of diversity. NDVI was also significantly correlated to the Shannon index of diversity. The declining trend of plant species in savanna ecosystems is directly linked to the decreasing precipitation and increasing temperatures. View Full-Text
Keywords: climate change; carbon sequestration; ecosystems; earth observation; biodiversity climate change; carbon sequestration; ecosystems; earth observation; biodiversity
►▼ Show Figures 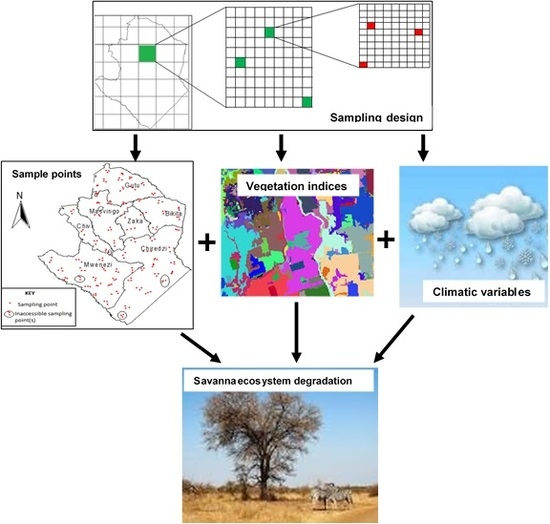