Honey bee colonies are affected by many threats, and the Varroa mite represents one of the most important causes of honey bee disease. The control of the Varroa population is managed by different methods, and in recent years, biotechnical practices are considered preferable to chemical approaches in order to safeguard honey bee health and avoid residues in bee products as well as the appearance of acaricide resistance. However, little is known about the economic performance of beekeeping exploitations in relation to the methods used for tackling Varroa. This study aims to investigate the economic impact of total brood removal (TBR) as a biotechnique to keep Varroa mites under control, and compare this to other common biotechniques and chemical Varroa control in numerous Italian beekeeping case studies. A pool of economic and technical indexes was proposed. The proposed index pool can be included in the development of an expert system (such as a decision support system) able to address the optimal management of this very complex activity, which requires natural resources, land protection, capital and high technical skills. The result showed that the adoption of the TBR biotechnique vs. other biotechniques led to an increase in terms of total revenue (increase values ranging from 11% to 28%) even though more labor is needed (increase values ranging from 43 to 83 min/hive) and a loss of honey production could be recorded in some cases. Additionally, the total expenses, represented mainly by supplemental nutrition and treatments with oxalic acid, affected the economic results of the biotechnical practices. The use of biotechniques vs. chemical control resulted in decreased treatment costs and increased feeding costs. The advantages resulting from not using synthetic acaricides (which are dangerous for honey bee and human health as well as the environment) as well as the advantages linked to the production of new nuclei (which are involved in the maintenance of bee stock and counteract the decline in honey bee population) and pollination ecosystem services could make beekeeping farms more resilient over time. View Full-Text
Keywords: total brood removal; beekeeping farms; honey bee; varroa control; biotechniques; economic result; management; organic regime total brood removal; beekeeping farms; honey bee; varroa control; biotechniques; economic result; management; organic regime
►▼ Show Figures 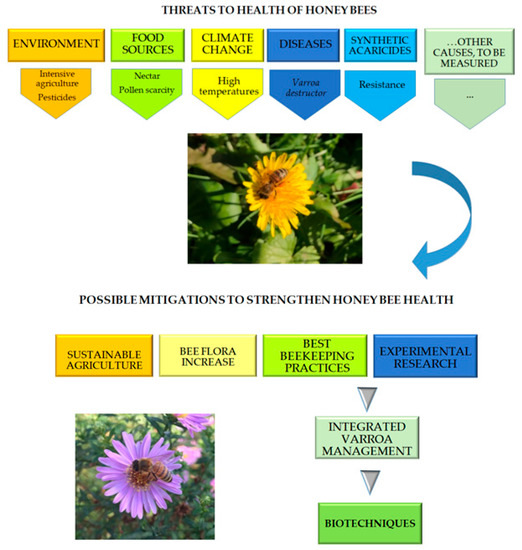