Measurement of Corporate Social Responsibility: A Review of Corporate Sustainability Indexes, Rankings and Ratings
Next Article in Special Issue

Identifying the Types and Impact of Service Provider’s Responses to Online Negative Reviews in the Sharing Economy: Evidence from B&Bs in China
Previous Article in Journal

Capturing a Complexity of Nutritional, Environmental, and Economic Impacts on Selected Health Parameters in the Russian High North
Previous Article in Special Issue

Volunteer tourism is a mixture of “volunteer” and “tourism”, which means tourism that focuses on volunteering [21,22]. In other words, it is a new form of tourism that not only pursues the purpose of enjoying tourism but also devotes some time to volunteering.
However, there is controversy in defining volunteer tourism as it depends on its purpose, timeframe, and elements, etc. [23]. The concepts and definitions of previous studies on volunteer tourism are as follows. According to Liston-Heyes and Daley [22], there is no definite definition of volunteer tourism, but it is commonly said that the definition is provided by Wearing [21]. Wearing [21] defined vacation as volunteering in an organized way, such as helping material poverty in a particular group, restoring a specific environment, or studying social or environmental aspects. In a recent study, Hasanova [24] suggested that a trip includes helping to reduce the material poverty of a social group, restoring a specific environment, or researching social or environmental aspects. Based on the contents of volunteer tourism discussed above, this study defines the concept of volunteer tourism as a new tourism activity that helps social groups in difficult circumstances to get away from their daily lives and to understand and enjoy local culture through exchanges.
Due to altruistic characteristics, volunteer tourism can be seen as a similar context with volunteering. However, the concept of tourism incurs certain costs such as transportation, lodging, and admission to tourist attractions [25]. It also differs in that it is ultimately for personal achievement, rather than volunteer contributions to the community [26]. Thus, volunteer tourism, which includes both leisure and volunteer work, is distinguished from other forms of tourism [27].

Volunteer tourists are described as volunteers and tourists. Volunteer tourism can be described as an action that is based on altruistic motives, such as contributions to local natural, social and economic aspects, as well as personal motives for experiencing personal growth [28]. In other words, volunteer tourism is driven by altruism and is differentiated from traditional tourism through opportunities for self-discovery, personal growth and valuation [29,30].
Mustonen [31] asserted volunteer tourism contains social elements; altruism, ethical dilemmas, mixture of individuality and sociality and one of them would be the main motivator depends on circumstance. However, generally speaking, it is not easy to distinctly determine whether one’s volunteer action is driven by altruistic intention in any one of those motivations. Taking this circumstance into consideration, Brown and Morrison [32], also Brown and Lehto [33], proposed separating volunteer tourists into two groups depending on their motivation, that is, volunteer-minded and vacation-minded tourists. Volunteer-minded tourists are more self-motivated with a greater emphasis on volunteering and often spend time volunteering at tourist destinations. Vacation-minded tourists, on the other hand, are less concerned about volunteering, tend to show more individualism or personality, and are more likely to have pseudo altruism [31,32,33]. Since then, there are many studies which have adopted the concept of volunteer tourist type [34,35].

2.3. Memorable Experience and Its Effect

The social norm has been frequently highlighted in extant studies as a key constituent of volitional process [44,45]. According to Cialdini et al. [46] and Ajzen [47], the term “social norm” is pertinent to the extent to which what individual’s behavior should or should not be in a particular social situation. In other words, the main facet of social norm is individual’s perception about the particular behavior in which influenced by people whom he/she thinks important. Undoubtedly, this social norm is broadly considered as a critical contributor to increasing individuals’ consciousness of moral duty to take an altruistic action in forming behavioral intention [48]. For instance, in the comprehensive and integrative review of determinants of pro-social intention/behavior, Steg and Vlek [49] identified that there is a positive and significant relationship between social norm and personal norm. They described the relationship as a normative process in the formation of pro-social decision. Consistent with their empirical research, Doran and Larsen [50] proved that social norm exercises a significant effect on moral norm in the eco-friendly behavioral context. Given this evidence, the following hypothesis is proposed:
Hypothesis 4. (H4)
Social norm has a positive effect on personal norm.

Personal norm means one’s belief that a traveler’s special behavior is ethically proper or improper [57]. Individuals’ personal norm is mostly experienced with their sense of moral/ethical duty to conduct a certain action [11,58], which forms their altruistic or socially responsible intention/behaviors [12,57]. While social norms are under the effect of other reference groups, this moral factor is driven by individuals’ internal process rather than external process, regulating their behaviors [59]. According to a previous research, the impact of this internal moral factor on individuals’ altruistic decision is greater than that of external social factors [42]. Doran and Larsen [50] empirically verified that personal norm has a positive influence on pro-social intention. Han and Hyun [41] also found that this personal norm significantly triggered travelers’ altruistic intention to select an ecological product option. Thus, the following hypothesis is developed:
Hypothesis 6. (H6)
Personal norm has a positive effect on altruistic intention.

2.8. Self-Interested Value and Its Role

Value refers to how consumers consider the product/service value based on the trade-off of what customers sacrifice and what they receive from a transaction [60]. Oh [61] and Lee et al. [62] noted that value judgments in marketing contexts are a highly subjective, cognitive, and plausibly emotional evaluation of a consumption experience, whereby the evaluation is relativistic to the dynamic comparison processes in accordance to the designated consumption situation. All things considered, the core aspect of individuals’ value perception comprises their self-interest. In those studies, self-interested value refers to one’s cognitive appraisal derived from the comparison between what they give up (e.g., time and effort) and what they obtain (e.g., benefits) through volunteer tourism.
Anti-altruistic actions frequently imply behaving according to egoistic interests, whereas most altruistic activities require individuals to wholly restrain their self-interest goal/desire for benefiting the society [18,48]. Nonetheless, fulfilling individuals’ self-interest desire is also regarded to be of significance in the altruistic behavior literature [7,19,20]. Indeed, researchers agree that centering solely on one’s pro-social/moral concern and awareness is insufficient to cause them to practice altruistic behaviors [18]. Individuals’ altruistic decision/behaviors can be maximized when they pursue both pro-social and self-interest goals [19,20,63]. In the situation where seeking personal interests is completely inhibited, volunteers are less motivated to behave in an altruistic manner [7]. According to Han et al. [64], individuals’ self-interest value/perceive benefits significantly affect the formation of behavioral intention as the moderators in the international tourism context. Their finding is consistent with Gremler et al. [65] who asserted a significant moderating effect of self-interest benefits on customer decision formation. Thus, the following hypotheses are developed:
Hypothesis 7. (H7)
Self-interested value acts as a significant moderator between psychological resilience and altruistic intention.
Hypothesis 8. (H8)
Self-interested value acts as a significant moderator between personal norm and altruistic intention.

Data collection was conducted at the Good News Corps Festival, which celebrates the successful completion of individuals’ overseas volunteer tourism activities. The data collection was done in Spring 2019. The participants of the festival are mostly volunteer tourists who participated in the one year-long international volunteer tourism program and their family members. The surveyors delivered the questionnaires to the participants of the volunteer tourism program during the festival. In agreement with the survey participation, a brief description of the study and its purposes were explained to the survey participants. They filled the questionnaire based on their latest volunteer tourism experience. The filled questionnaire was returned onsite and then was checked for completeness by the surveyors. A small gift was given to all participants as an expression of gratitude. A total of 302 usable cases were obtained.
Among the 302 participants, 57.3% were men (n = 173), and 42.7% were women (n = 129). The participants were 23.75 years old on average and their age range was between 20 to 37 years old. The respondents’ income was questioned. Approximately 54.4% stated income in the range of $25,000–$54,999; after that, under $25,000 (29.6%); in the range of $55,000–$84,999 (12.0%), and $85,000 or higher (4.0%). Regarding education level, a majority of respondents held a bachelor’s degree or were university students (78.1%), followed by 13.9% with a 2-year degree/community college degree, 4.3% were graduate degree holders, and 3.6% had a high school diploma or less. With regards to the frequency of international volunteer tourism, most respondents answered that it was their first volunteer tourism experience (83.8%), followed by twice (6.6%), 4 times or more (6.3%), and 3 times (3.3%).

For the assessment of the hypothesized moderating effect, an invariance test was obtained. We divided the respondents into the high group of self-interested value and the low group of self-interested value by using a K-means cluster analysis. There were 195 cases in high group while 107 cases in low group. A baseline model comprising both high and low self-interested value groups was then built. Table 3 and Figure 1 demonstrate the model contained a satisfactory level of fit to the data (χ2 = 615.205, df = 299, p < 0.001, χ2/df = 2.058, RMSEA = 0.059, CFI = 0.919, IFI = 0.919, TLI = 0.907). We compared this baseline model to the nested models in which a specific path is restricted in an equal manner. The outcome of the invariance model assessment is shown in Table 3.
Our finding from the chi-square test showed that the linkage from psychological resilience to altruistic intention significantly differs between high and low groups of self-interested value (Δχ2 (1) = 9.344, p < 0.01). Therefore, hypothesis 7 was supported. Our result also showed that the relationship between personal norm and altruistic intention was significantly different between the two groups (Δχ2 (1) = 4.851, p < 0.05). Accordingly, hypothesis 8 was supported. Overall, our result demonstrated that self-interested value acted as an important moderating part within the projected conceptual framework. 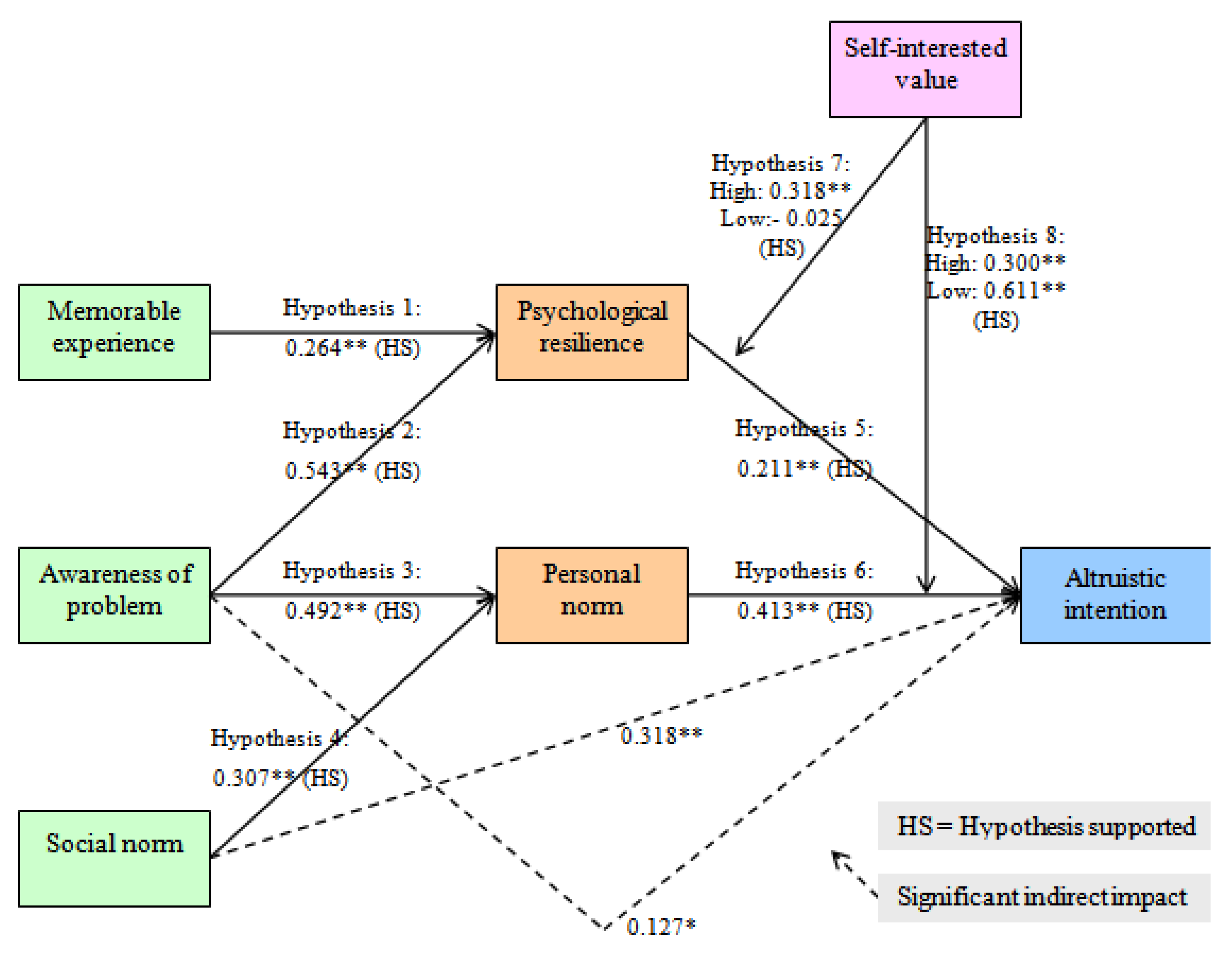