The Influence of Knowledge Sharing on Sustainable Performance: A Moderated Mediation Study
Next Article in Special Issue

Expiry Dates, Consumer Behavior, and Food Waste: How Would Italian Consumers React If There Were No Longer “Best Before” Labels?

Halving food waste by 2050 as per the Sustainable Development Goal 12.3 is key to securing a food system that is sustainable. One approach to reducing household food waste is through education campaigns. We recruited 501 households divided into three types of intervention groups and compared with a control group to better understand the efficacy of diverse education campaign approaches. Food waste interventions included a passive approach (handouts), a community engagement approach, and a gamification approach. We conducted waste audits, household surveys (pre- and post-intervention), and a focus group at the end of the campaign. The passive and gamification groups had similarly high levels of participation, while participation in the community group was very low. The passive group and the gamification group had higher self-reported awareness of food wasting after the campaign and lower food wastage than the control group. Waste audits found marginally significant differences between the game group and the control (p = 0.07) and no difference between the other campaign groups and the control group in edible food wasted. Frequent gamers were found to generate less edible food waste than infrequent gamers. We conclude that the evidence about the potential for gamification as an effective education change tool is promising and we recommend further study. View Full-Text
Keywords: food waste; awareness campaigns; gamification; intervention; consumer behaviour food waste; awareness campaigns; gamification; intervention; consumer behaviour
►▼ Show Figures 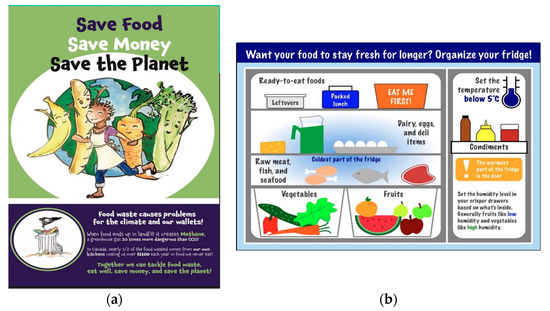