How are a company’s profits developing? Are its capital costs adequate? Is it achieving the optimal level of investment capacity? These are crucial questions for the management, owners or potential investors of every business, including state enterprises [1]. To a large extent, these questions can be answered by the economic value added (EVA) indicator; it is used in a number of financial analyses for rating economic stability and sustainability. It goes without saying that this also applies to those businesses operating in the construction sector. A fundamental function of every business is to analyze, rate and control its finances. Where negative phenomena occur in a company’s financial management, it must take corrective action. Over the long term, failure to act accordingly is not sustainable and may result in the cessation of the organization as a unit. Businesses can fund their activities with their own capital or with the use of external capital from a creditor, who provides the credit at a predetermined rate of interest [2]. The effective management of such business resources is, therefore, key. Within this context, there are a number of financial instruments and indicators to deal with the issue. One of them is the EVA indicator, which is used to determine business management success and to monitor added value for owners. The EVA indicator is characterized as net income after taxation minus capital costs; it is used to measure the economic profit of a business [3]. Businesses that dispose of limited funds resort to external sources of finance because it enables the business to achieve optimal investment capacity [4]. Although the current trend is to merge financial and non-financial indicators, for instance, within the context of the integration of business management systems [5] or even in the event of integrated reporting [6], the EVA indicator, which is one of the main indicators of value generation for shareholders [7], is and will remain significant in terms of business reporting, as well as in terms of its impact on the decision-making of management and relevant stakeholders.
The aim of the contribution is to determine the amount of credit absorption in the construction sector of the Czech Republic on the basis of the calculation of economic value added or the difference between EVA entity and EVA equity, respectively. This calculation is especially focused on what its impact is on acquiring and absorbing credit, as well as on equity and external sources of finance. The purpose of the text is to explain that many businesses base their decisions about the involvement of borrowed capital on intuition or on the basis of incorrect parameters. It is true that there is a number of reasons for a business to take out a loan (bank credit, trade credit), e.g., solvency or overcoming cash flow shortage. However, the question remains what effect such credit will have on the creation of business value as its fundamental objective. Will the credit help in the value creation, or will it reduce the value of the business? The answer to this question is not easy. Most businesses do not even try to find it. The question is not answered simply even in the professional literature. It is this article that deals with looking for the answer to this question and finds it successfully. It uses the combination of two indicators that assess the performance in order to determine whether the use of borrowed capital will have a positive or negative impact on achieving the main objective of the business. This is addressed only sporadically in the professional literature. None of the resources available to us solves this issue in the way presented by the authors, that is, by including EVA entity and EVA equity. The calculation was carried out with the help of data for the period 2012–2018 for the construction sector in the Czech Republic. On the basis of the aim of the article, a hypothesis was established, specifically concerning the concept of sustainable development and corporate social responsibility, as illustrated by Rajesh and Rajendran in the example of Germany [8].
The difference in the values of EVA entity and EVA equity has a fundamental impact on the amount of the loan provided.

It is possible to summarize the results of the research presented in this contribution as follows: small and medium-sized enterprises are receiving credit, i.e., external sources of finance, which are not resulting in the greater fulfillment of their aims, namely to generate value added for their shareholders. This is not a complete surprise. Underestimating “hard” financial indicators, which subsequently results in higher costs of capital, is a frequent mistake made at the managerial level. The current intensification of interest in integrated reporting and the relativization of the aims of companies, i.e., away from generating profit and increasing value for shareholders, is not relevant here. As was suggested by Jones, Wright and Smith [75], although these concepts belong to the most often quoted in the field of corporate reporting, statistical testing of causality confirms that financial performance results in greater activity in the area of shared values. They directly refer to this as “managerial fashion”. Although this phenomenon cannot be underestimated, it is nevertheless clear that financial indicators remain the key to successful direct management or judgment. EVA entity and EVA equity undoubtedly belong to these indicators because successful company management is directly linked to the cost of equity [76]. The macroeconomic factors that affect the amount of economic value added by companies are numerous. In this case, the greatest influence on value added is exercised by those factors that affect labor productivity, i.e., employment. Within this context, and with regards to the Czech Republic, to which the data in this contribution relate, unemployment is low and at similar levels as in Western countries. In this case, the negative impact may be reflected in the current economic crisis, which will be reflected in an increase in unemployment and may result in reduced labor productivity, which will consequently be reflected in reduced value added.
The aim of this contribution was to determine the credit absorption capacity of businesses operating in the construction sector in the Czech Republic on the basis of the difference between EVA entity and EVA equity. The analysis produced negative results.
The recommendation for small and medium-sized enterprises is to increase their total invested capital, the value of which reached a low level in 2018. The reasons for this were the high values for short-term liabilities caused by the enormous increase in the weighted average cost of capital. This resulted in negative EVA entity values, which otherwise had a tendency toward growth (from 2013–2017) and were beginning to generate value added for business owners and creditors. Unfortunately, 2018 saw a decline due to the high cost of equity.
The importance of monitoring and calculating EVA entity and EVA equity lies in the possibility to provide companies with further insights into how well they are performing and where they stand with regards to the generation of economic value added. From a practical point of view, a company’s management can find out whether or not its investments create value, which is knowledge they can either turn into a competitive advantage or use to determine what their shortcomings are. The recommendation for small and medium-sized enterprises is to deal better with short-term liabilities in order to not impose a high burden on their businesses, which is reflected in the weighted average cost of capital.
On the basis of the research results presented in this contribution, it can be said that although the high values of external sources of finance acquired by small and medium-sized enterprises in the construction sector of the Czech Republic generate increases in return on equity, the difference between the values of the EVA entity and EVA equity indicators demonstrates that credit absorption is negative.
It is true that one of the reasons for a given small and medium enterprises (SMEs) result is and may be information asymmetry. There can be several other reasons, e.g., the preferences of the founders or managers, obstacles arising from the regulation of financial and capital markets, etc. This would, however, require separate research; in fact, this could be a great subject of further research on this topic. Nevertheless, this text aimed to inform that businesses (whatever reason it may have) do not behave only rationally in the issue of involving borrowed capital, either because they do not actually have a well-defined main goal, i.e., the growth of the value for the owner, or they do not have a tool that would provide a relatively simple answer to the question whether taking out a credit would have a positive or negative impact on the growth of the value for the owners.
With the conclusion that applies to the whole industry, the authors want to make SME managers think about and use the calculation methodology. Once the results are provided, it will be possible to compare them with the industry they operate in. 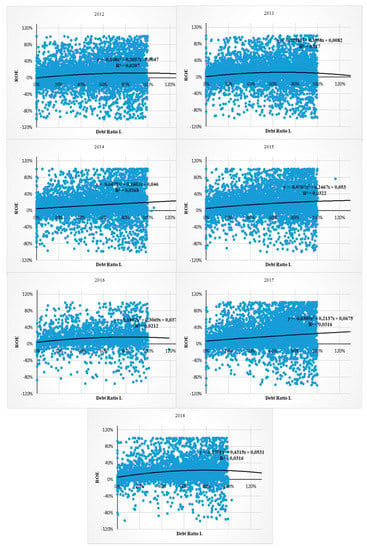 Table 8. Interpretation of results.
Table 8. Interpretation of results.
© 2020 by the authors. Licensee MDPI, Basel, Switzerland. This article is an open access article distributed under the terms and conditions of the Creative Commons Attribution (CC BY) license (http://creativecommons.org/licenses/by/4.0/).
We use cookies on our website to ensure you get the best experience. Read more about our cookies here.
Accept
We have just recently launched a new version of our website. Help us to further improve by taking part in this short 5 minute survey here. here.
Never show this again