Semiarid regions are characterized by prolonged droughts and drought regimes. In Brazil, 57% of the northeast region is considered semiarid, with an average annual rainfall of less than 800 mm. This climatic condition imposes the need to conduct public policies and develop infrastructure in order to mitigate drought effects. In this context, the São Francisco River transposition project is an alternative to problems concerning city water supplying and aiming at decreasing socio-economic impacts resulting from water restrictions in this region. On the one hand, the river transposition has the potential to establish a new development cycle in Northeastern Brazil, while, on the other, electricity demands, estimated at 2533 GWh/year from 320 MW of installed capacity, require technological alternatives that ensure the project’s financial sustainability. In this context, this study presents proposals for arrangements concerning electric energy production through photovoltaic systems as an alternative supply for the transposition project. To this end, a study of the region’s photovoltaic solar potential was carried out. Based on the performed assessment, three production arrangement proposals that consider the use of (i) the lateral area and (ii) the transposition channel and (iii) part of the area of some reservoirs belonging to the transposition of São Francisco river. The study point out that the use of this potential for all three studied arrangements is favorable to supply, individually or in a combined form, the electrical energy demanded by the pumping stations installed. View Full-Text
Keywords: solar photovoltaic energy; sustainable; transposition; semiarid; Brazil solar photovoltaic energy; sustainable; transposition; semiarid; Brazil
►▼ Show Figures 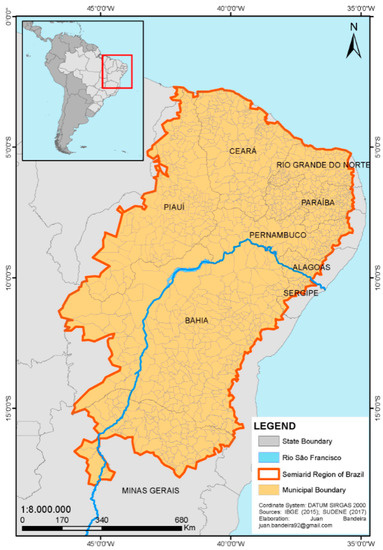