Influences of Behavioral Intention to Engage in Environmental Accounting Practices for Corporate Sustainability: Managerial Perspectives from a Developing Country

After suffering from a very difficult economic period of hyperinflation and economic stagnation in the mid-1980s [21], Vietnam made a historical decision to launch economic reforms, named as ‘Doi Moi’, with the principle of “market-oriented socialist economy under state guidance”. Since then, the Vietnamese economy has scaled up more than ten times. The Vietnam General Office of Statistics reports that the recent GDP growth rate reached 6.80% and 7.08% in 2017 and 2018, respectively.
There are some differences as well as similarities between Vietnam and other emerging economies in Asia in terms of corporate governance and sustainability management. First, the proportion of government-owned shares in firms in Vietnam is relatively high (57%, on average, among the privatized companies). The Enterprise Law 2005, which came into effect in 2006, mandated state-owned enterprises to be joint-stock companies or one-owner limited liability companies with 100% government ownership [25]. Thus, most companies are still greatly influenced by the government, although they have been open to the public. Second, similar to companies in the neighboring countries (e.g., Thailand [26] and Bangladesh [15]), most companies in Vietnam are either family owned or are controlled by large shareholders (e.g., business groups or conglomerates). This indicates that management in many Vietnamese companies are effectively just extensions of the dominant ownerships, where the corporate boards are owner-driven. Consequently, the executive directors, CEO, and chairman of most of the companies are from the controlling shareholder’s family. Additionally, the influence of foreign investors is relatively weak compared with China and South Korea. On average, the fraction of foreign investors’ shares of the listed Vietnamese companies is 20.6% as of 2018 (c.f., 28.0% in China and 32.1% in South Korea).
In recent years, the Vietnamese government has started to pay attention to firms’ social and environmental issues. For instance, a new national strategy on Green Growth, which would guide its overall economic development plans, was announced in 2012. This strategy has initiated specific implementation plans of each ministry. In particular, the Ministry of Finance has devised an action plan for the Vietnamese finance sector to incorporate the concepts of green growth and sustainable development into finance by 2020. In 2015, the ministry revised the directive of “the guidelines for information disclosure in the financial market” (i.e., the Circular 155/2015/TT-BTC) by indicating that the listed companies are advised to provide relevant information about their plans, activities, and progress related to sustainable development. The guidelines specify a list of seven categories for sustainability information disclosure: management of raw material, energy and water consumption, compliance with environmental protection regulations, personnel policies, responsibility for local communities, and green financing activities guided by the State Securities Commission. In 2015, Ho Chi Minh Stock Exchange (HOSE) and Hanoi Stock Exchange (HNX) joined the Sustainable Stock Exchange (SSE) initiative. The initiative was launched in 2009 and was led by the United Nations Secretary General with the purpose of promoting responsible investment around the world. Since then, the listed companies in Vietnam have been increasingly pressured to release their social and non-financial information. Figure 1 presents a trend of sustainability information disclosure in Vietnam, showing a recent and dramatic increase of disclosure.

This study examines the effect of government ownership on sustainability information disclosure in Vietnam. First, we employed a binary measure for the dependent variable—voluntary sustainability information disclosure—following previous studies [16,17]. If a firm provides corporate information covering environment, society, and governance issues either as separate reports (e.g., sustainability report) or as integrated annual reports, it is considered a “reported firm” (coded as SUSR = 1). Second, this study measures government ownership (GOV) as the percentage of government shareholding [44,46], coded as GOV. Besides, we use dummy variable GOVD, which represents whether the government owns shares [24,47,48]. Regarding corporate governance, the proportion of the largest shareholder (CONTROL) and other three dummy variables (i.e., the government as the largest shareholder, institutional investor as the largest shareholder, and individual investor as the largest shareholder) are included. Third, we use certain control variables that are most likely to affect any sample of firms’ voluntary information disclosure. Profitability is one of the most powerful explainers for information disclosure [49,50]. Firms with superior upcoming earnings performance have a higher disclosure propensity to reveal their “good news” to financial markets [51]. In this study, we used earnings before income tax/net sales (EBITNS) as a proxy. ROA and ROE were also used for testing robustness. In contrast, leverage is likely to be negatively associated with voluntary sustainability disclosure [47]. We controlled leverage by measuring the debt-to-equity ratio. Firm size is measured as a natural logarithm of net sales. Larger firms are more likely to disclose sustainability information [43,44]. There are several alternative indicators for firm size, such as total assets, market capitalization, and the number of employees. Dang et al. [52] argue that firm size can be measured differently according to research orientation. Accordingly, this study employed net sales as a proxy for firm size to reflect better a product-market context in Vietnam. We conducted a robustness test by replacing net sales with total assets, indicating little difference in the results of the analysis. Market-to-book ratio was also controlled because highly evaluated firms in financial markets tend to report non-financial information to reduce agency costs and provide a good signal to investors [53]. This study also controlled the listing period of a firm [27] because it can affect the firm’s discretionary decision to disclosure non-financial information [16]. Moreover, industry and year were included as dummies to control for the effects of systemically different contexts. Table 1 summarizes the variables and measurements used in this study.

This study compiled a dataset from publicly traded Vietnamese firms registered at Ho Chi Minh Stock Exchange (HOSE) and Hanoi Stock Exchange (HNX) from 2010 to 2016. As of July 2018, a total of 699 companies excluding the financial sector, were listed on the Vietnam State Securities Commission. This study winsorizes the dataset at the level of 1% and 99% to eliminate outliers. We hand-collected data because of insufficient reliable financial data services in Vietnam. This study used several sources to compile a dataset: the website of each company for audited financial statements and sustainability information, economic-financial information service for stock prices (www.cafef.vn), and the annual reports of State Capital and Investment Corporation for government ownership data. Excluding companies in the financial sector and data that was not available during the sample period; we identified 374 listed companies for the study sample. Among the sample, 48.1% belong to HOSE while 51.9% belong to HNX. A total of 2678 firm-years were compiled for the analysis. Table 2 presents a summary of the sample.

Table 4 represents the descriptive statistics for the variables used in this study. The average of sustainability disclosure is 0.169, indicating that 16.6% of the sample reported their sustainability activities during the research period. The average of government ownership (GOV) is 22.9%. The government owns 59.7% of the sample in Vietnam.
Table 5 presents the correlation matrix among the variables. Sustainability information disclosure (SUSR) is negatively correlated with government ownership (GOV) and governmental ownership dummy (GOVD) at the 0.01 cut-off level, which is very much consistent with our hypothesis. SUSR is positively associated with profitability (EBITNS), firm size (SIZE), market-to-book value ratio (MB), and years of the listing period (AGE) at the 0.01 significant level but negatively correlated with debt ratio (LEV) at the 0.1 cut-off level. These results of the correlation analysis generally support our expectations. Companies that are larger, more profitable, evaluated as promising in the capital market, and more tenured at the stock exchange are likely to report non-financial information, while those with higher debts seem reluctant towards sustainability information disclosure.
We used t-test to investigate differences in government ownership and other key control variables between the sustainability information disclosure group (SUSR = 1) and non-disclosure group (SUSR = 0). Table 6 reports the mean values of the explanatory variables, which indicate the differences between the two groups. Government ownership is significantly lower in the disclosure group than that in the non-disclosure group at the 0.01 cut-off level. This analysis also shows that control variables such as profitability (EBITNS), firm size (SIZE), market-to-book value ratio (MB), listing period (AGE), and leverage (LEV) differ significantly between both groups. These results are very much consistent with those of Spearman’s correlation analysis (Table 5).

We report the results of additional tests conducted to determine the robustness of our main findings. First, this study focuses on measuring sustainability information disclosure at different points in time. We regressed time-lagged sustainability disclosure (i.e., SUSRt) on government ownership (GOVt−1) and government ownership dummy (GOVDt−1). Second, we added two other proxies for profitability (i.e., return on asset and return on equity). Table 10 presents the results, which are consistent with the previous results. Model 11 and Model 12 suggest that government ownership influences time-lagged sustainability information disclosure at the 0.05 cut-off level. This result clearly supports our hypothesis. The effects of key control variables on time-lagged sustainability reporting are also as indicated by the results of previous analysis in this study. Profitability (EBITNS), firm size (SIZE), and stock value (MB) have a positive effect on sustainability disclosure one year later while leverage (LEV) has a negative effect. A different result is found regarding the effect of listing period (AGE) on one year-lagged sustainability reporting, indicating that the effect is not significant. Model 13 and Model 14 also provide the same results. While ROA and ROE are shown to be positively associated with sustainability reporting, the negative significant effect of government ownership remains unchanged. Collectively, this analysis with time lag and other profitability measures confirms the robustness of the previous analysis, which provides evidence that strongly supports our hypothesis.

By clarifying some limitations, this study suggests directions for future research. First, this study provides evidence about the negative effect of government ownership on voluntary information disclosure, which is not consistent with the findings of previous studies. This inconclusive result might be engendered by the contextual difference of the Vietnamese economy. To generalize the results of our study, future research should re-examine the role of the government in non-financial information reporting in other country settings. Second, this study focuses only on disclosure in a separated form of sustainability report or sustainability information integrated in annual reports. Companies can communicate with stakeholders about their sustainability activities using other forms of reporting. Future research should consider a wider range of disclosure in other media such as newspapers, the Internet, and so on. Third, although this study controls for potential confounding variables in the model, other variables may also affect sustainability information disclosure in emerging economies. Future work could examine other contributing factors (e.g., management commitment, organizational capabilities, and international buyers).

H.T.T.P. designed the study, collected data and conducted statistical data analysis. S.-C.J. developed a research framework and hypothesis. S.-Y.L. wrote the manuscript with several practical implications. H.T.T.P. and S.-C.J. read and approved the final manuscript. All authors have read and agreed to the published version of the manuscript. 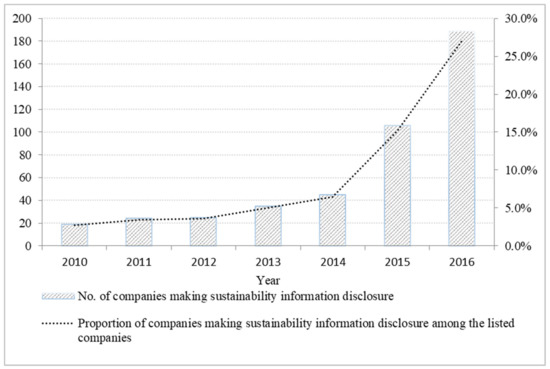 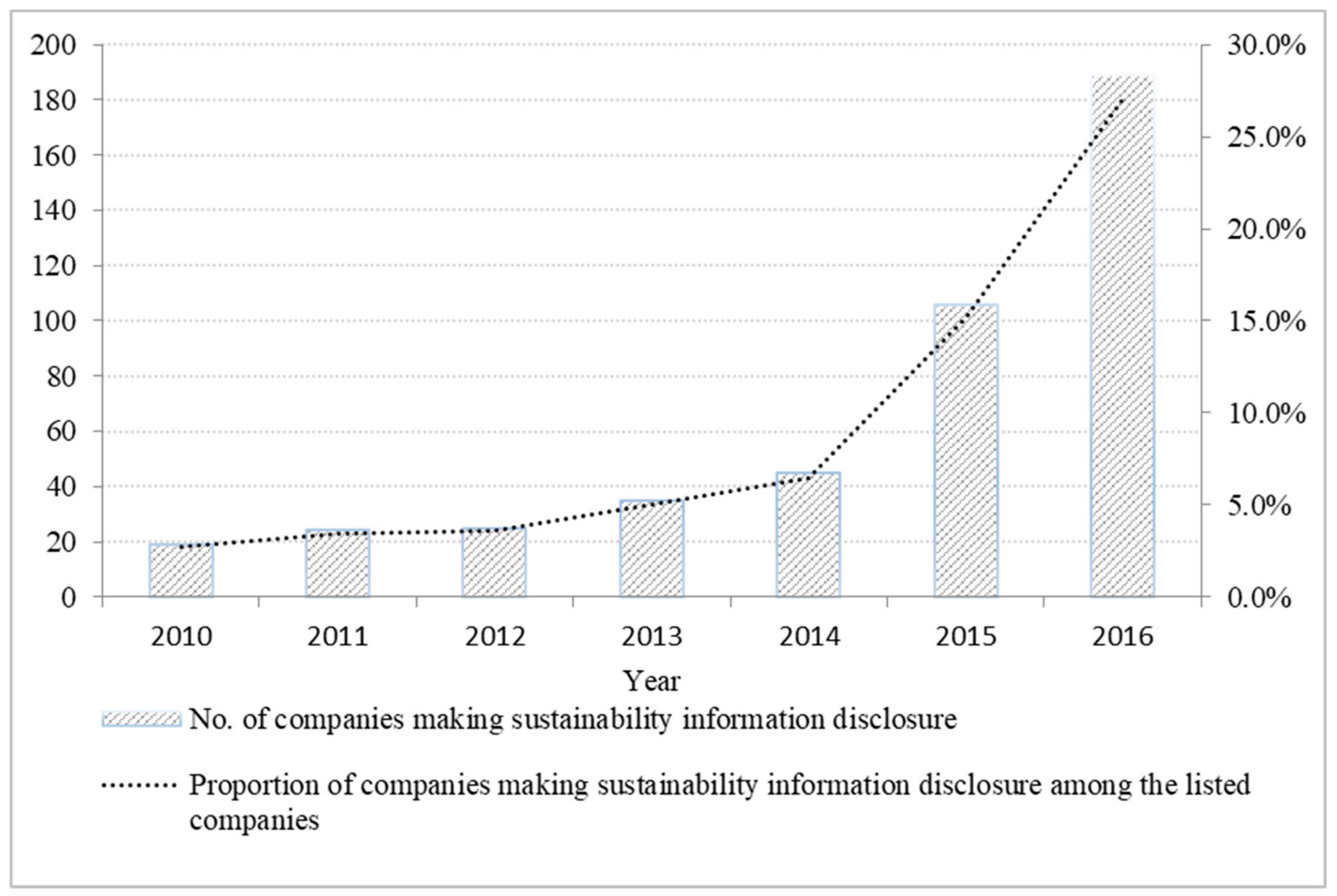