It is of great significance to study the spatiotemporal dynamics of the ecosystem and explore the driving forces that affect change in the ecosystem in the National Barrier Zone (NBZ). Based on multi-source remote sensing data, this paper analyzed the change in the ecosystem in the NBZ from 2000 to 2015. Natural and social economic factors were selected as the driving factors, and the change mechanism of the ecological system in the NBZ area was analyzed by means of redundancy analysis and other methods. The results showed the following: (1) Between 2000 and 2015, the ecosystem changes in the NBZ are obvious. It is important to note that the grassland and urban ecosystem increased by 13,952 and 6720 km2, respectively; at the same time, the desert ecosystem significantly decreased by 4544 km2. (2) The human activity represented by gross domestic product (GDP) is the main factor in the change of ecosystem change in the NBZ with a contribution of 75%, especially in the ecological barrier of the Sichuan–Yunnan–Loess plateau with a GDP contribution rate of 83%. (3) The changes in the ecosystems are significantly influenced by multifactorial interactions, such as the joint contribution rate of the drought index (PDSI) and GDP reaching 0.11 in the ecological barrier of Qinghai–Tibet plateau. (4) The ecological protection projects, such as the Green for Grain Project in the NBZ, play a positive role, and the ecological environment is improving. The conclusions of this paper will be used as a basic theory to contribute to subsequent research on ecosystem services, policy making, and other aspects in the NBZ. View Full-Text
Keywords: National Barrier Zone; redundancy analysis; ecosystem change; driving forces National Barrier Zone; redundancy analysis; ecosystem change; driving forces
►▼ Show Figures 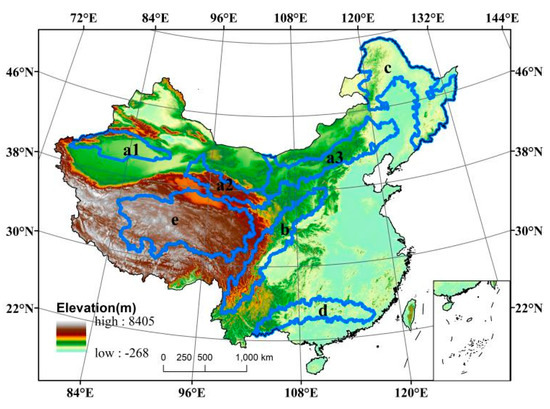