Secular Trends in the Achievement of Physical Activity Guidelines: Indicator of Sustainability of Healthy Lifestyle in Czech Adolescents
Next Article in Special Issue

:
Rapid depletion in fossil fuels, inflation in petroleum prices, and rising energy demand have forced towards alternative transport fuels. Among these alternative fuels, diesel-ethanol and diesel-biodiesel blends gain the most attention due to their quality characteristics and environmentally friendly nature. The viscosity and density of these biodiesel blends are slightly higher than diesel, which is a significant barrier to the commercialization of biodiesel. In this study, the density and viscosity of 30 different ternary biodiesel blends was investigated at 15 °С and 40 °С, respectively. Different density and viscosity models were developed and tested on biodiesel blends soured from different feedstock’s including palm, coconut, soybean, mustard, and calophyllum oils. The prognostic ability and precisions of these developed models was assessed statistically using Absolute Percentage Error (APE) and Mean Absolute Percentage Error (MAPE). The MAPE of 0.045% and 0.085% for density model and 1.85%, 1.41%, 3.48% and 2.27%, 1.85%, 3.50% for viscosity models were obtained on % volume and % mass basis. These developed correlations are useful for ternary biodiesel blends where alcohols are the part of biodiesel blends. The modeled values of densities and viscosities of ternary blends were significantly comparable with the measured densities and viscosities, which are feasible to avoid the harm of vehicles’ operability.
Keywords:
ternary blends; biodiesel; diesel; ethanol; models; density; viscosity

Biodiesel production and characterization of pure alcohols, biodiesel, and HSD were carried out at the Department of Chemical Engineering of the University of Engineering and Technology Lahore, (New Campus). HSD used in this study was supplied from Shell (Pakistan) and had zero oxygen content with properties within the range identified by Pakistan’s fuel supplier agencies. Biodiesel used in this study was sourced from palm, soybean, coconut, mustard, and calophyllum oils. These raw oils are converted into biodiesel through the transesterification process in the presence of homogeneous catalyst KOH and methanol. The operating parameters of the transesterification process were kept, reaction temperature of 57.50 °С, catalyst concentration of 1 wt.%, methanol-to-oil ratio of 8.50:1, reaction speed of 600 rpm, and reaction time of 2 h. Alcohols used in this work were purchased from Central Chemicals Pvt. Ltd. Pakistan. The purity of alcohol used in this work was 99.9%. The composition of tertiary blends used in this work is shown in Table 1.
The physicochemical characteristics of HSD, biodiesels, and ethanol are shown in Table 2. Acid value is the representation of residual acid in fuel; the physicochemical properties of the fuel may be altered with higher acid value [65]. The acid value of all biodiesels was observed within the ASTM standards specified limits, ranging from 0.20 to 0.30 mg KOH/g. Biodiesel with high saturation can cause higher flash-point value with poor cold flow properties [66]. Palm methyl ester (PME) has a medium level of saturation, due to which it has moderate flow properties and possesses higher viscosity and density as compared to the HSD [67]. The composition of any biodiesel depends upon the feed stock oil used for the production. The composition of fatty acid methyl esters (FAME) of PBD, CBD, SBD, MBD, and CaBD were determined using an Agilent 6869 gas chromatograph and mass spectrum (GCMS). Physiochemical characteristics of different biodiesels and bioethanols used in this study are illustrated in Table 2, while the (FAME) composition with their saturation levels of PBD, CBD, SBD, MBD, and CaBD are shown in Table 3. The GCMS analysis revealed that palm biodiesel consists of 44.51%, 42.43%, and 13.06% saturated, monounsaturated, and polyunsaturated fatty acids, respectively. Coconut biodiesel has the highest level of saturated fatty acids of 87.5%, and mustard biodiesel has the lowest level of saturated fatty acids of 5% with the highest level of monounsaturated of 74.3%; maximum polyunsaturated fatty acids were identified in CaBD with a value of 56.3%.

The density and viscosity of ethanol-diesel-biodiesel ternary blends were measured at 15 °С and 40 °С according to ASTM standards D4052 and D7042, respectively, using SVM 3000 viscometer. Each sample was tested three times while keeping the standard deviation ±0.0005; however, the effect of temperature variation on density and viscosity of individual biodiesels, diesel, and ethanol was also determined. The temperature range for biodiesels and diesel was kept at 15 °С to 105 °С, and for ethanol it varied from 15 °С to 75 °С.

2.3. Equations for Density and Viscosity Modeling

The analytical capacity and precision of the developed density and viscosity models were observed with the help of some statistical tools: Absolute Percentage Error (APE), Mean Absolute Percentage Error (MAPE), Standard deviation (SD), and coefficients of determinations (R2) are illustrated in Equations (7)–(10). where, xexpt and xcalc represent the density and viscosity values obtained from experiments and calculated respectively from the proposed models, represents the average value of the measured densities and viscosities, and N shows the total number of observations.

3.1. Effect of Temperature on the Density of Diesel, Ethanol, and Biodiesels

3.2. Effect of Bioethanol on Density of the Binary Biodiesel Blends

Both KED and density model were tested using statistical tools such as % APE. The results of APE of all blends of five different types of biodiesels with % volume and % mass are shown in Figure 3. For the determination of the most suitable model of the density, the APEs were calculated for each value of KED and density model. Mean Absolute Percentage Error (MAPE) of 0.15% and 0.22% was observed for KED model using % volume and % mass fractions, respectively. On the divergent, using % volume and % mass in the newly developed density model gives MAPE of only 0.045% and 0.085%, respectively. Figure 3 shows the calculative precision of these two models; APEs for all types of biodiesels were calculated on both % volume and % mass bases. It was observed that, for both models using % volume, all biodiesel blends give smaller APE as compared to % mass. The proposed density model has been proved to be the best model for the determination of the densities of ternary blends. This density model shows some deviation with % mass, as the concentration of bioethanol and biodiesel increases in ternary blends; however, on the basis of % volume, this model is suitable for the determination of density of ternary blends containing 15% bioethanol with 30% and 40% biodiesel.

3.4. Effect of Temperature on the Viscosity of Diesel, Ethanol, and Biodiesels

3.5. Effect of Bioethanol on Viscosity of the Binary Biodiesel Blends

To validate the Grunberg model and three suggested viscosity models, each value obtained from these models was compared with the measured viscosity value using viscometer. Some statistical tools including % APE and % MAPE were also tested. Figure 6 shows APEs of all biodiesel blends on % volume and % mass bases. The MAPE obtained from three proposed viscosity models on the bases of volume fraction in percentage are 1.85, 1.41, and 3.48, respectively, while on the base of % mass fraction they are 2.27%, 1.85%, and 3.56%, respectively. For obtaining the viscosity of ternary blends with respect to volume fraction, viscosity model 2 with exponential regression analysis was considered to be the best one. The Grunberg model shows deviation for all biodiesel blends. The other three viscosity models are good enough for obtaining the viscosity of ternary blends. From Figure 6a–e, it was observed that viscosity model 2 gives the precise values of viscosity for PBD, CBD, SBD, and MBD blends, but it is not suitable for the CaBD blends. The best model for CaBD is viscosity model 1.

The viscosity and density of binary biodiesel blends decreases with the addition of bioethanol. In this work, two density and four viscosity models were used to predict the precise values of density and viscosity of diesel-biodiesel-bioethanol blends. These models can be helpful to determine the density and viscosity of ternary blends more accurately for temperatures ranging from 15 °С to 75 °С; outside this temperature range, the accuracy of these models will be dropped, as ethanol starts to evaporate at 78 °С. The accuracy of these models was evaluated using % APE and % MAPE statistical tools. Among density models, the newly developed density model gives more accurate results on % mass fraction, and viscosity model 2 gives the precise values of viscosity for PBD, CBD, SBD, and MBD blends, but it is not suitable for the CaBD blends. The best model for CaBD is viscosity model 1.

The authors would like to thank the Faculty of Engineering at the University of Malaya, Malaysia for their support through the research grant no GPF018A-2019. 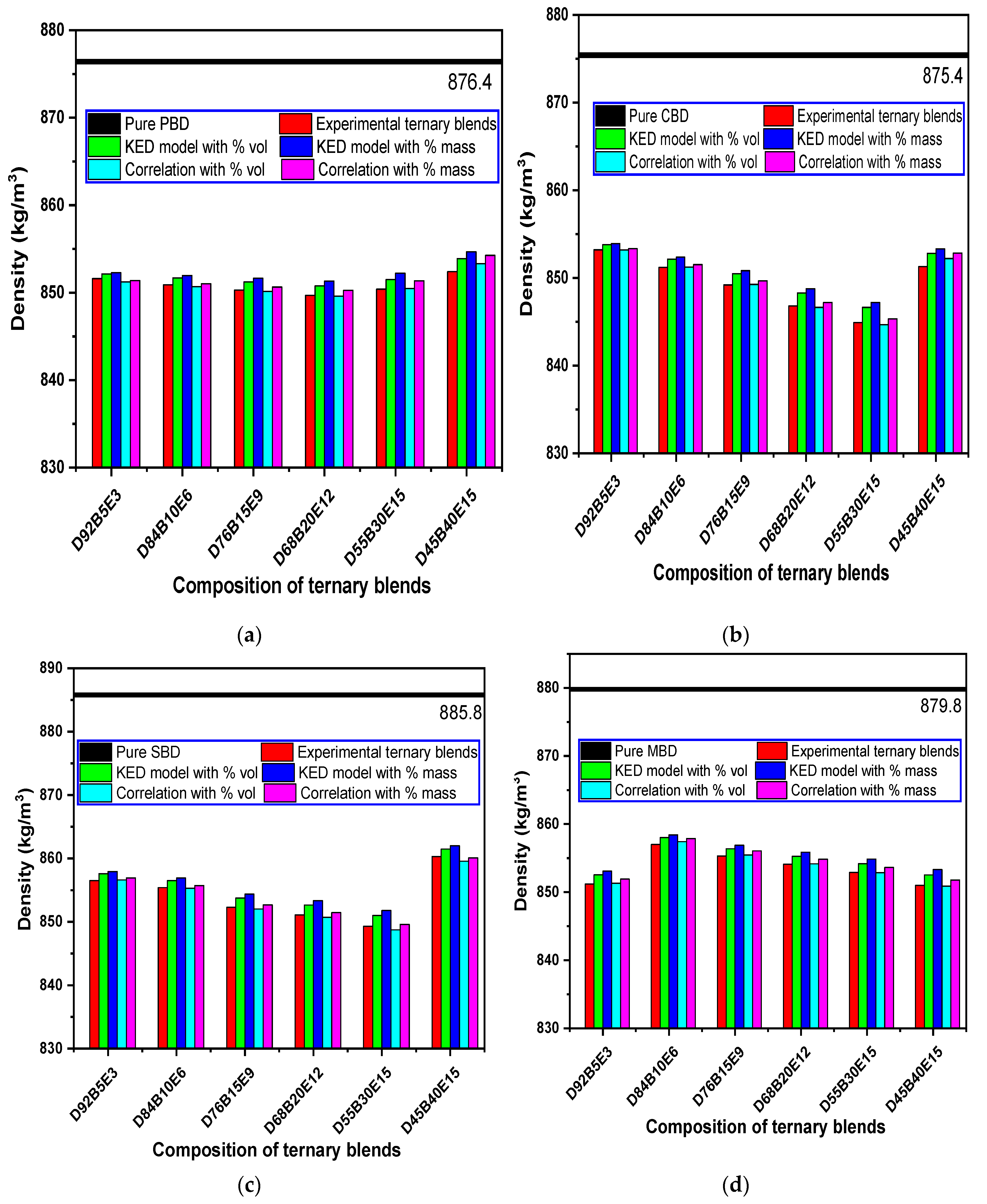 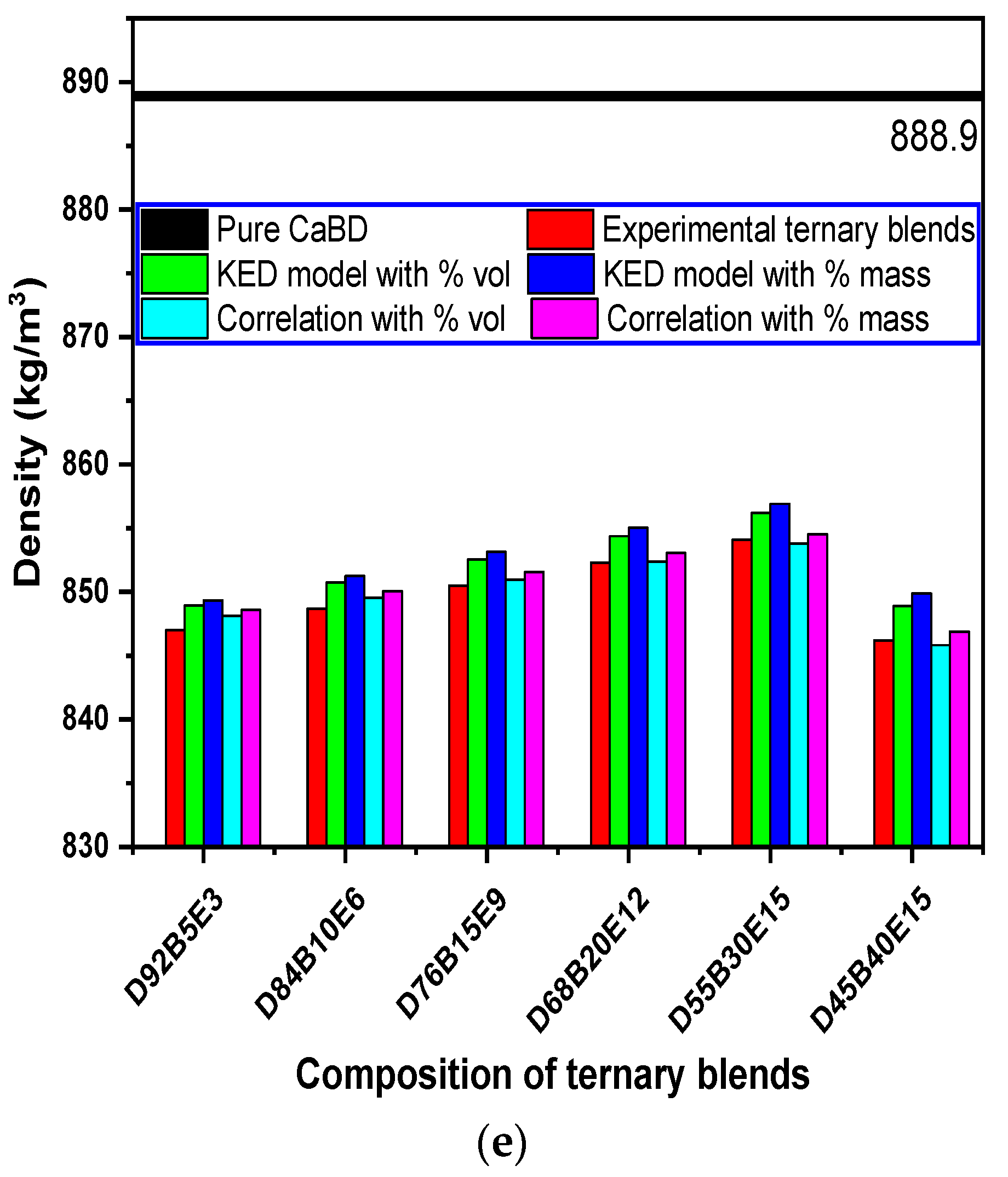 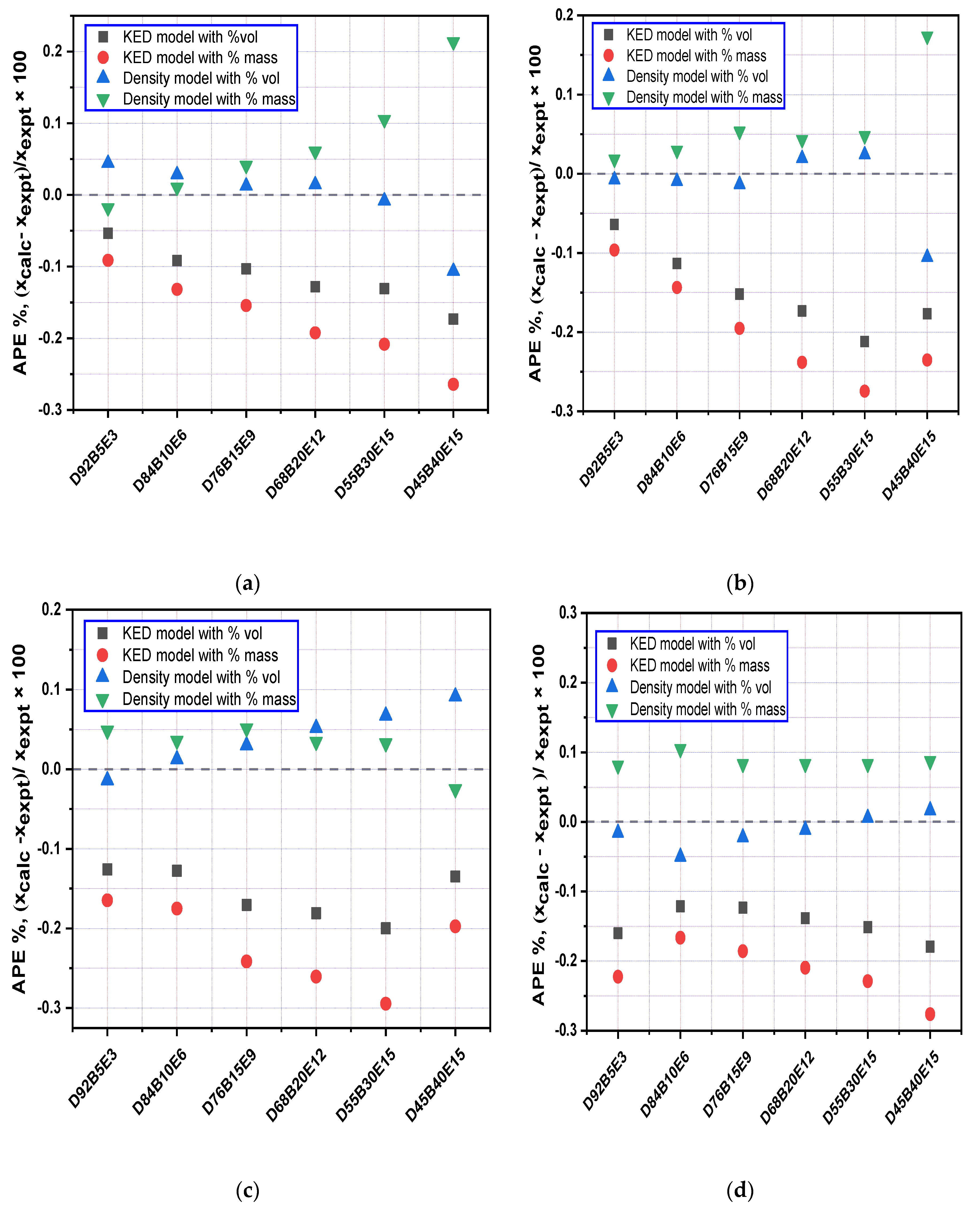 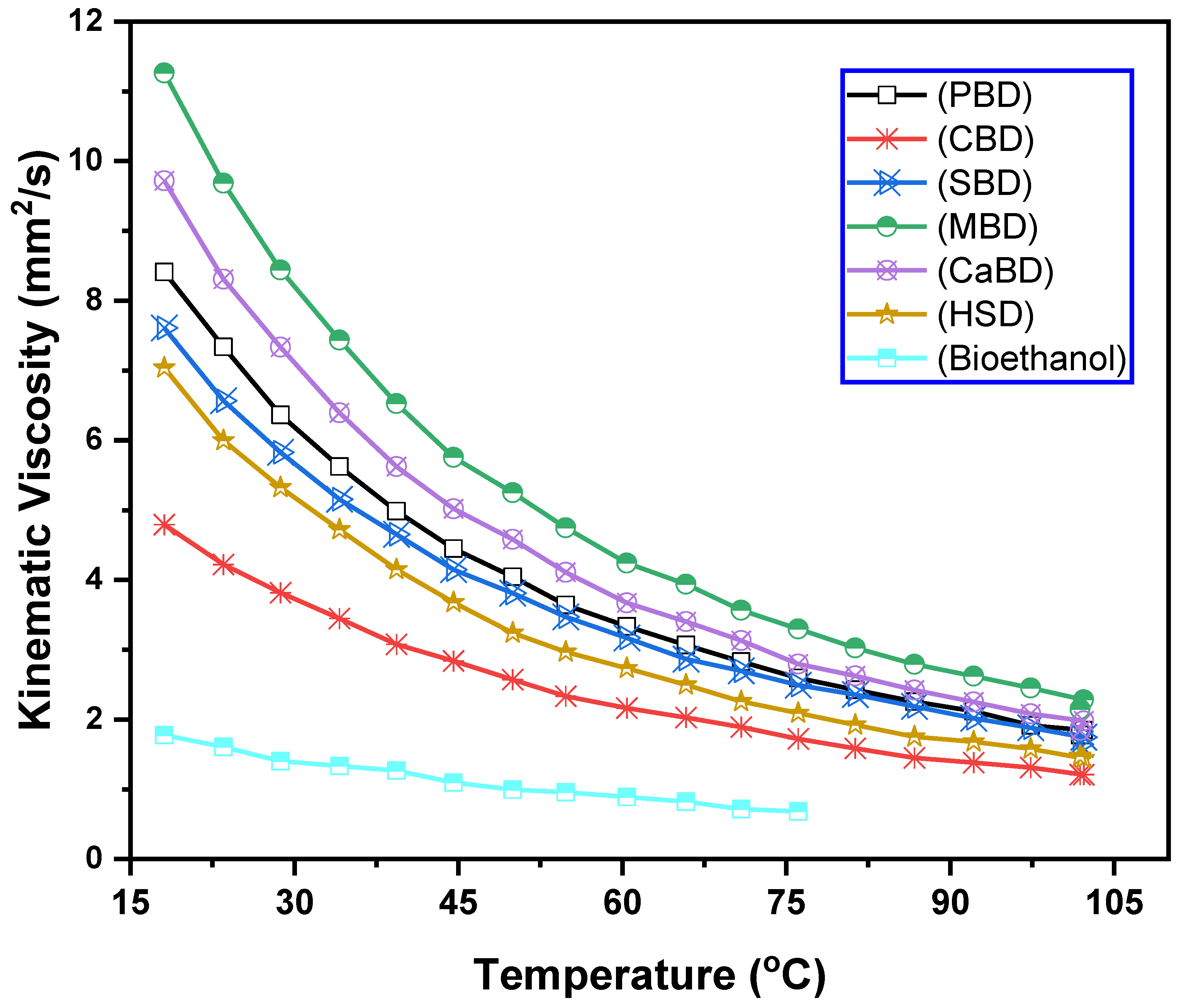