Local Fresh Food Products and Plant-Based Diets: An Analysis of the Relation Between Them
Previous Article in Special Issue

The optimization of municipal solid waste management requires the re-organization of niche sectors too. The sector of the university is not fully explored from the scientific point of view. The creation of networks among universities in order to face this issue allows an exchange of expertise also at an international level as demonstrated in this article, by three case studies: two Italian (University of Trento and University of Insubria) and one Russian (Ural Federal University) universities. This study highlights the pros and cons of each university in terms of waste management. Specifically, setting up communication campaigns, standard procedures, monitoring actions, pricing strategies that incentivize selective collection, and improving the collaboration within the university community are identified as crucial initiatives. The margins of improvement of the three universities analyzed are favored by the composition of the generated waste. The implementation of good practices can give economic advantages to the universities, besides improving their level of sustainability.
Keywords: MSW; university; circular economy; selective collection; best practice; COVID-19 MSW; university; circular economy; selective collection; best practice; COVID-19

Municipal solid waste (MSW) management was, and still is, one of the most studied topics. Waste production and characterization in large groups of young people attending universities, campuses, and schools are slowly beginning to interest the scientific community with in the last decade. This can be seen from recent publications included in the Scopus® database. To this concern, the interest has been focused on: the viability of decentralized biogas production from the food waste generated in a university compound [1], the potential valorization of food waste generated in primary and secondary schools through composting [2], the relevance of paper and cardboard in the waste generated at university level [3], the importance of involving university cafeterias and canteens in the source separation of food waste [4], the strategic role that sustainable waste management projects can have when involving the university community [5], the fact that instilling the right behavior in school children is also beneficial to the environmental behavior of their families [6], the high recyclability of waste generated in universities thanks to the presence of plastic and paper [7], and the seasonal variability of waste generated in university campuses [8]. Some scientists tried also to find a connection between education, knowledge, communication, and action for better MSW practices. The results demonstrated that: environmental education on source separation of waste in high schools must be performed while adopting scientific methods in case of small communities [9], school is the starting point to get a change of mindset, as speaking with students (all potential communicators) means communicating indirectly with all the other targets [10], the teaching of pro-environmental attitudes must be encouraged through a simultaneous information campaign in homogeneous territories [11], and communication campaigns must be based on a knowledge of the composition of MSW deeper than the past [12].
In Italy, in 2015, the RUS®—Network of Universities for Sustainable Development, was formed. This Network was made in order to offer the possibility to find, propose and share solutions for environmental sustainability and social responsibility among the Italian Universities, through the 17 Sustainable Development Goals (SDGs) [13]. Waste management is included in the SDG n. 12 (“Responsible consumption and production”) and it represents a big responsibility for the Universities not only from the economic point of view but also from the environmental one. For this reason, a RUS® Waste Working (WW) group was established and works considering the Circular Economy Packages regarding waste management.
In 2018, 82% of the Italian universities belonged to RUS®. This network developed an initial census on waste management in the 74% of universities who have joined the RUS® WW group [14]. The results showed that a quarter of them must implement waste management practices in a sustainable way in order to comply with the RUS® goals [14,15].
The present paper aims at enlarging the database of universities and waste management practices by reporting the modalities through which MSW management is carried out in three universities. Two of them are located in Italy and comply with EU legislation and circular economy principles [16,17]. The third university is located in Russia, on the border between Europe and Asia, and is in the initial stage of MSW optimization [18,19,20].

In the present paper, three case studies are reported. The first case refers to a university that can be considered as a model for all the universities regarding waste management. The second case refers to a university that is in the developmental and implementation stage. The third case presents a university out of Italy, namely in Russian Federation (which is currently implementing a wide-scale municipal solid waste reform), that intends to propose itself as a starting model for all Russian universities.
The first case study is located in the northern part of Italy, in the Trentino Region. This region has developed an efficient selective collection (SC) system, aiming at an 85% SC rate and a generation of only 45 kg of Residual Municipal Solid Waste (RMSW) per inhabitant. Present data are close to these targets. In this Region, the first MSW management plan was issued in 1993 and the fifth one is currently under preparation [21,22,23].
The University of Trento (UniTrento) is a medium-sized university located in the Trentino Region. UniTrento accounts for more than 18,000 people, including about 16,000 students. This university is composed of a high number of buildings and is divided into three main campuses:
One more research center is hosted by the agricultural institute of San Michele all’Adige, about 14 km north from Trento. Figure 1 reports all the university buildings.
One of the main advantages of the waste collection system of UniTrento and, in general, of Trentino is the tariff system in use. Differently from other contexts, waste management is based on a “punctual tariff” system, which accounts for the effective volume of RMSW generated by the users. The users, thus, pay a fixed tax and a variable cost that depends on the amount of RMSW produced [24,25]. Such a system obliges the users to become responsible for their habits when purchasing products and when separating the waste.
The waste management system of UniTrento has been developed hand in hand with the regional system, due to the close relationship between the province of Trento and the university. Nowadays, SC is well-implemented in every building of UniTrento and is designed to collect paper and cardboard, light packaging (i.e., plastic and metal packaging), and the residual fraction of MSW (RMSW). In addition, in the nearby university canteens and bars, the SC is active also for the collection of glass and food waste. Food waste collection is also available near vending machines. All the waste fractions are collected by the local waste management company, which transfers the recyclable fractions to dedicated facilities where the materials enter the recycling circuit. The RMSW is sent to MSW landfills. UniTrento pays a fee for the management of RMSW, which is based on the surface of buildings (fixed tax) and a variable cost of 0.09 € per liter of excess RMSW produced.
The second case study is located in Lombardy (Italy). In 2018 the regional per capita production of urban waste was 478.7 kg ab −1 y −1. Waste SC amounted to 3,409,356 t in 2018, with an increase of +4.5% compared to the previous year. A final overall indication that can constitute a starting point of evaluation is the per capita cost of managing urban waste at the regional level, which is equal to 126 euros. This value is lower than both the national average, equal to approximately 174 euros and that of the northern regions of Italy, equal to approximately 154 euros, demonstrating the overall good management of the integrated waste system, even after the substantial abandonment of the controlled landfill practice.
The Insubria University (Uninsubria) is a young medium-sized university born in 1998 and has three main locations: Varese, Como, and Busto Arsizio. Uninsubria has about 15,400 people, including 12,000 students. This university has about 40 buildings and two main campuses. The SC is not totally implemented. The starting point for better MSW management in Uninsubria begins with its participation in the RUS® WW group [26]. The first step was to develop and implement progressively an MSW management plan for all the university campuses, that includes several steps:
The third case study is located in Ekaterinburg, which is one of the four biggest cities in Russia. MSW management is under development. According to the report of the Association of Environmental Universities of Russia for 2019 [27], more than 125 containers have already been installed for waste selective collection and accumulation (Table 1).
Ural Federal University named after the first President of Russia B.N. Yeltsin (UrFU) is the largest federal university in Russia with more than 56,000 students and has 14 academic buildings (Figure 2).
The waste management system at UrFU does not imply separate waste collection at most academic buildings. At present, however, the UrFU Student Organization is working on a project designing an MSW selective collection system.
The methodology adopted in the present paper was based on three steps:

MSW management in universities is a topic growing in interest in the sector. The present paper enlarged the database of universities committing to increase their level of sustainability, with a specific focus on the waste sector. The analyzed case studies demonstrate that optimizing SC is a complex subject involving the whole university community as the MSW generation concerns a wide variety of areas (rooms, offices, etc.). The kind of fractions that characterize the MSW generated in universities are suitable for high SC efficiencies. In order to obtain that, a potential pathway is the adoption of a tariff based on the amount of residual MSW delivered to the collection company. The present paper confirms what emerged from the recent literature (still scarce): the dissemination of source separation criteria within the community and the sharing of good practices between universities play a key role in improving the level of sustainability in the education sector. However, possible ameliorative interventions must consider local policies in terms of waste management. Indeed, if a well-established waste management system aiming at increasing the recycling rate of waste is not implemented in the area of a university, this will inevitably limit the number of good practices a university could set up. This represents a limitation, which might not depend on the universities themselves, but which may indirectly reduce the margins for improvements.
The present paper can be considered as the first step for MSW management implementation and improvement at the university level. The research did not have the ability to continue because of the COVID-19 situation (all the structures being closed). However, the authors intend to proceed with new research in order to have more data and to be able to compare them with the ones before the emergency. Finally, the obtained results will be used to re-calibrate the strategies of a selective collection in each university.

The authors wish to thank Dolomiti Energia Spa and, especially, C. Realis and G. Baldessarri Antoniolli for the data on the fractions contained in the residual waste produced by UniTrento. This research was supported by Act 211 Government of the Russian Federation, contract № 02.A03.21.0006. 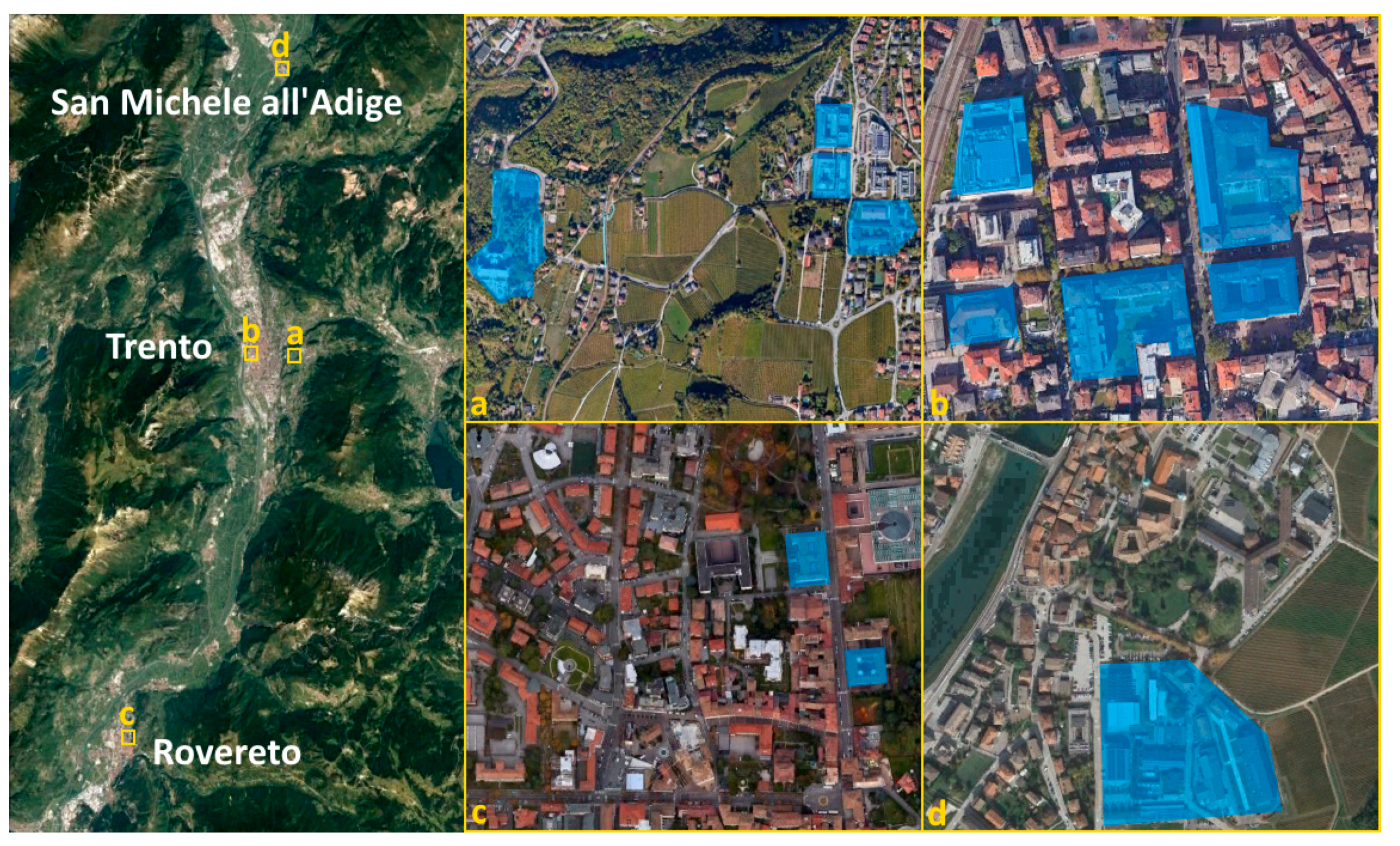 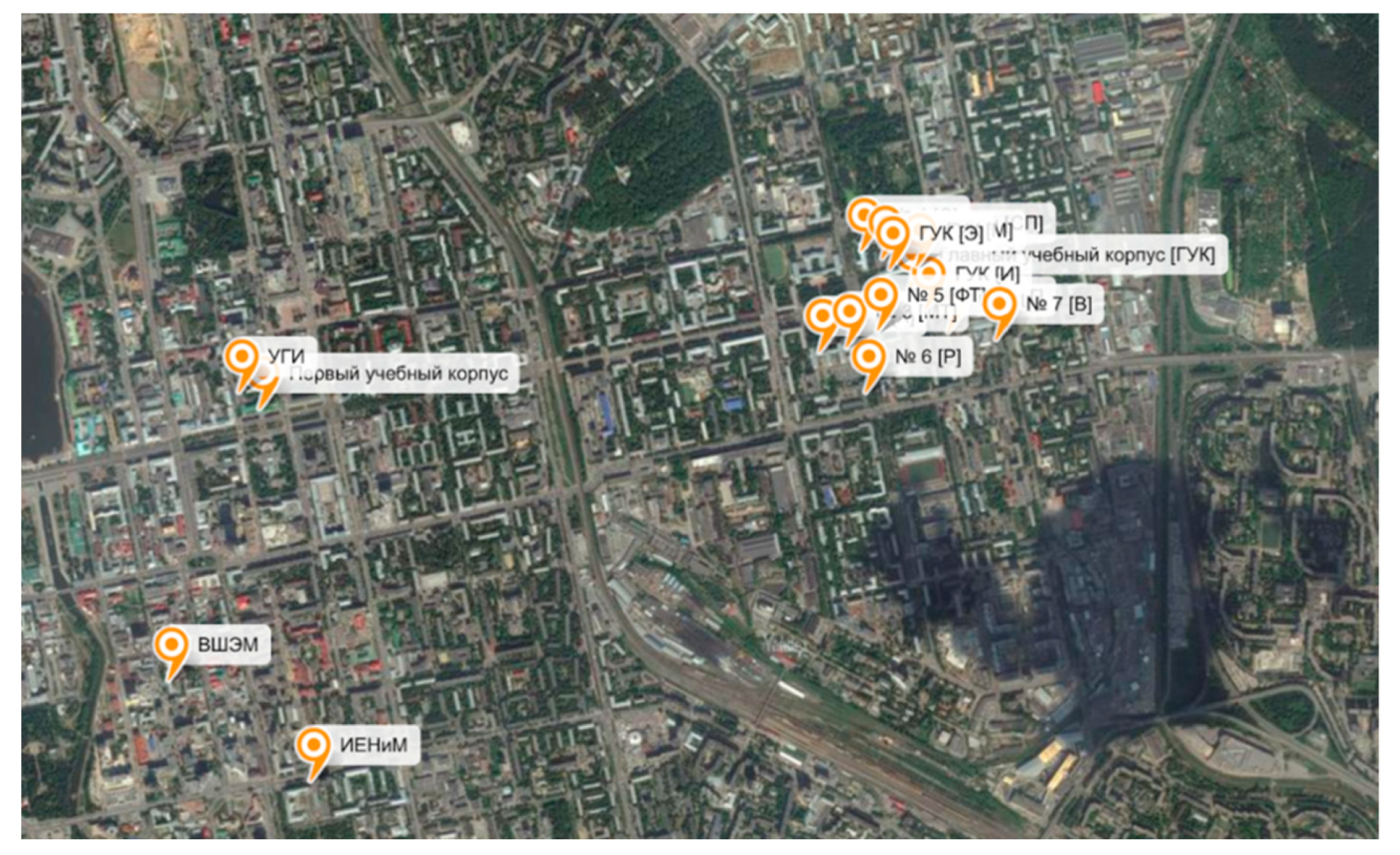 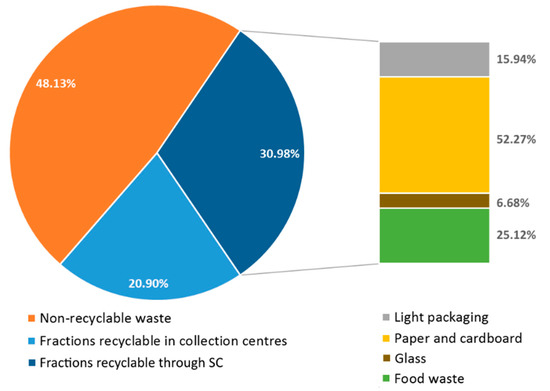 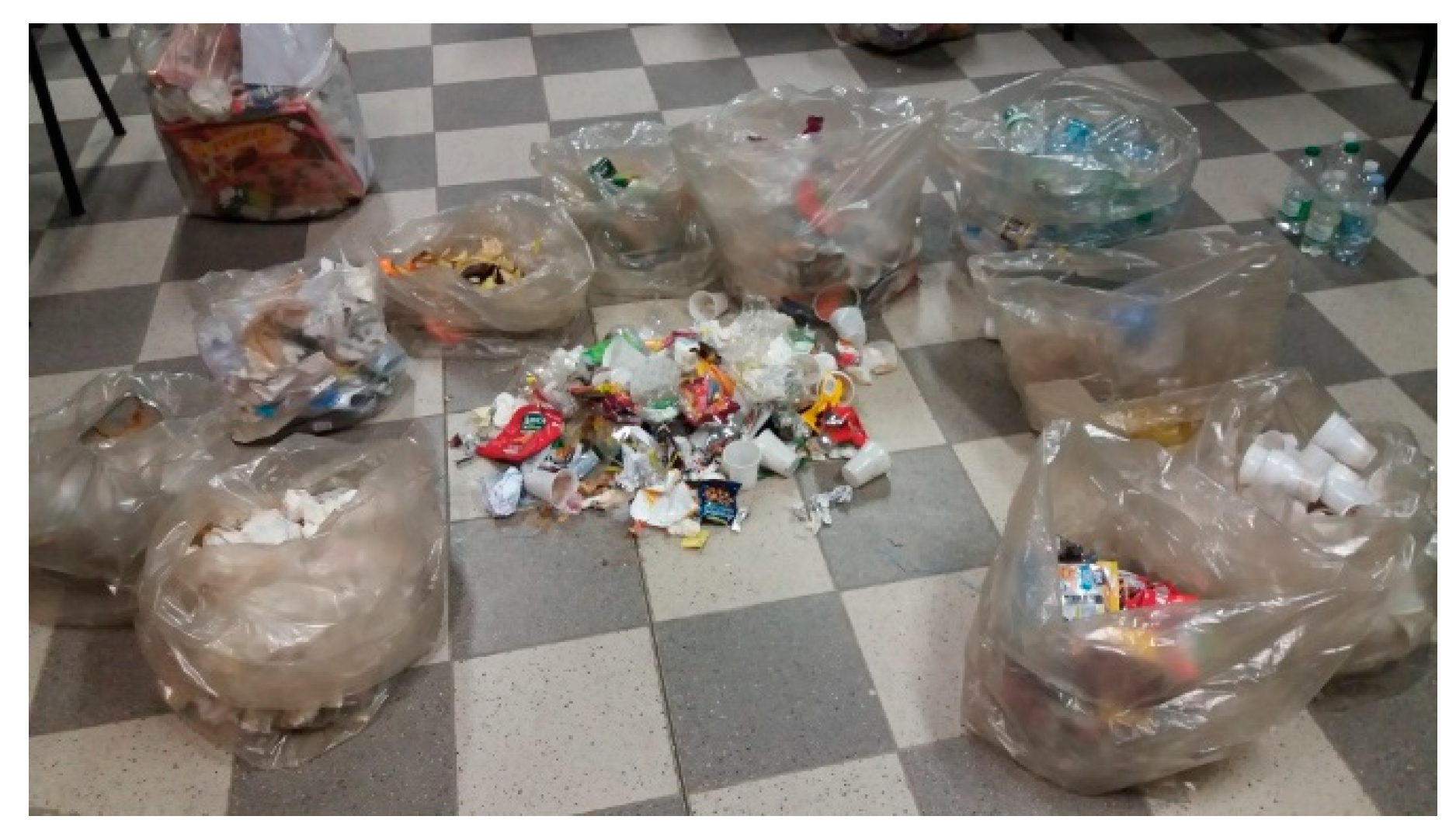 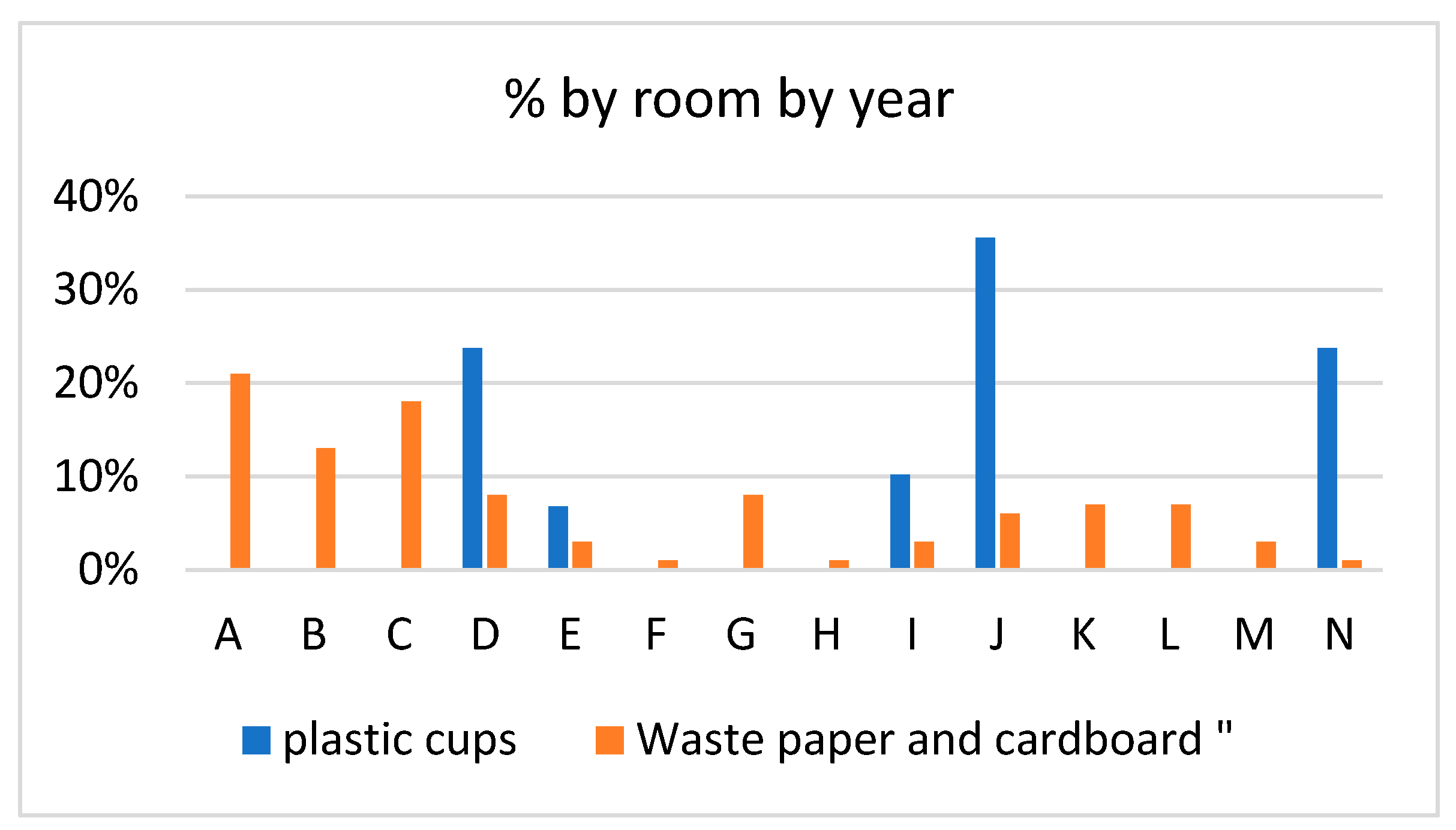