Impact of Geographic Distribution of COVID-19 Cases on Hotels’ Performances: Case of Polish Cities
Next Article in Special Issue

Spatial Patterns of Vineyard Abandonment and Related Land Use Transitions in Beaujolais (France): A Multiscale Approach

While the resilience of French vineyards is currently threatened, this paper focuses on the Beaujolais terroir, where the disappearance of vineyards has been qualitatively observed by local stakeholders. A targeted survey was led at three complementary scales. First, we provide an overview of the evolution of agricultural landscapes and practices for the whole Beaujolais area since 1990 from national statistical databases. It shows that the vineyard extent reached a maximum during the 1990s and that significant bifurcation occurred in 2000. Second, we document land use evolution in relation to vineyard abandonment at a more local scale. Three case studies (lower Ardières, Marverand, Merloux) exemplify the main local settings, and the land uses are described over time from an analysis that employed multitemporal photo interpretation. The results quantified the decrease in the vineyard surface extent since 1999: approximately 30% was lost in regular terroirs and 5% was lost in high added-value terroirs. Third, at a fine scale, we explained the precise location of the abandoned parcels regarding the site characteristics (e.g., incoming solar radiation, slope gradient, terroir quality). The results showed differences in evolution patterns between southern and northern Beaujolais. In northern Beaujolais, winegrowers tended to abandon vine parcels that were considered of lower quality; while, in southern Beaujolais, the winegrowers tended to abandon vine parcels in relation to the difficulty of maintenance (remote and steep parcels were preferentially abandoned) or in relation to suburbanization (parcels close to built-up areas were preferentially abandoned). View Full-Text
Keywords: vineyard; abandonment; landscape; land use; Beaujolais vineyard; abandonment; landscape; land use; Beaujolais
►▼ Show Figures 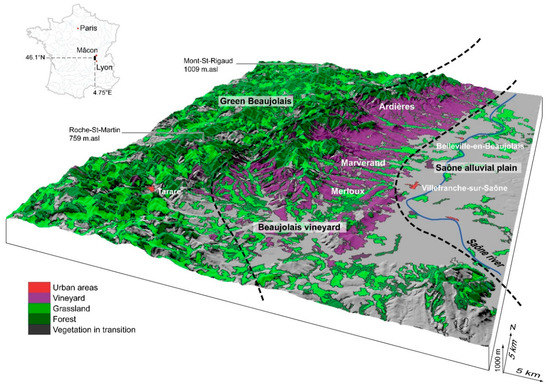