The Effect of Parental Economic Expectation on Gender Disparity in Secondary Education in Ghana: A Propensity Score Matching Approach

Applying an Evolutionary Growth Theory for Sustainable Economic Development: The Effect of International Students as Tourists

In this globalized era of strict competition, all actors in countries must focus on their strengths for continuous growth, which would presumably lead to sustainable economic development. Amongst the three components of sustainable development, this paper focuses on the economic and social aspects. Many countries are becoming service-oriented for economic growth. Education is a form of human capital investment which significantly contributes to countries’ national income via students, particularly international cross-border students in higher education institutions. While endogenous growth models dismiss the importance of governments in the growth process, in this paper, the Keynesian and new growth theories are combined to form an evolutionary growth theory. This research aims to analyze the short and long-term relationships between macroeconomic variables, international students, and their impact on the gross domestic product (GDP) of a small island with the intention of policy implications for stakeholders to reach or maintain sustainable economic development. Using an evolutionary growth theory with 34 years of time-series data on quarterly base, the vector autocorrection (VAR) model helps reveal the short and long-run relationships as well as impacts on the economy for sustainable economic growth. The results confirmed a long-run relationship via cointegration. Moreover, they approved bidirectional causality between student numbers, general secondary school enrolment, and GDP. Findings suggest significant implications for all stakeholders, particularly for higher education institutions, the government, and local citizens due to the importance of micro and macro-economic variables’ effect on GDP. The results prove that educated human capital contributes to economic growth. Governments should continue their existing strategy regarding secondary school enrolment rates as it is found to be the most effective variable in the long-run. As education, knowledge, and information transfer rises, it contributes to sustainable development through promoting social stability. Limitation of the unavailability of the total yearly population, GDP was opted instead of GDP per capita. View Full-Text
Keywords: economic growth; sustainable economic development; international students; human capital; higher education economic growth; sustainable economic development; international students; human capital; higher education
►▼ Show Figures 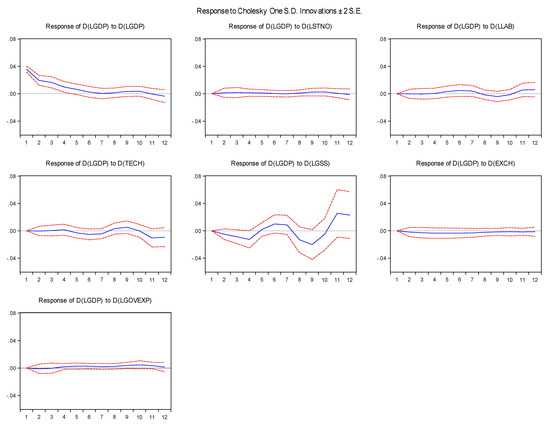