Apart from the immediate consequences of safety, health, range, and cost on EV usage, aspects already presented in Table 1, another aspect, life cycle assessment (LCA) is relevant for EVs, especially in terms of environmental impact and energy consumption. PEVs consume less energy and cause less pollution than heavier EVs.
Table 2 presents the LCA impact of PEVs and can be seen as an extension of Table 1. Although this type of analysis implies some uncertainty due to changes in technology, rider behavior [38], lack of standard methodology, and metrics for dynamic performance [33,39], it can still be used for testing the sustainability of an EV, but only if it is correlated with other types of analysis that can guarantee the static and dynamic performance metrics related to the application’s requirements. Today, from the application point of view, the advances in power electronics permit cheap and very efficient commutation solutions [36]. In this sense, PEVs could be seen as the right candidate for testing the control strategies of EVs at a smaller scale. In order to meet the sustainability challenges, e-bikes, which are one of the most promising PEVs, permit the appropriate compromise between most performance metrics due to their customizable design.
A European study analyzed the economic and social impact of owning an e-bike, in reference [43], reporting fuel savings of ~300 € per year, an acceptance rate of 70%, and a safe operation since no incidents were reported.

As can be observed in Figure 4, when comparing lead-acid battery–based conventional motorcycles to e-bikes and heavier PEVs, such as e-scooters, the latter have a more negative impact on life cycle in terms of Pb (mg/km) and SO2 (mg/km) [23]. E-bikes and other PEVs have a short life span, and therefore the disposal of batteries can have a very negative impact on environment [44]. When it comes to energy consumption, energy use (kWh) has the largest impact, as seen in Figure 5. This can be attributed to the influence of EV storage. Table 4 analyzes the main performance metrics of the most used storage elements that provide the necessary energy and power for the propulsion of PEVs.
One storage solution that is absent from Table 4 is Li polymer. It is a promising lithium battery that presents good power density, but their calendar life is modest, as detailed in reference [45]. There are also other types of battery and storage solutions that were not considered in Table 4. Ni-iron, Ni-zinc, Ni-cadmium, aluminum-air, and zinc-air batteries are analyzed in reference [46]. Nickel’s low operating voltage is similar with that of Ni-MH, while Zinc-air has a reduced number of life cycles. Li-oxygen, Li-sulfur [46], and magnesium-ion batteries are even better than Li-ion batteries in energy density, as discussed in [47], in the 300–1000 Wh/kg range. However, these are only predicted values since they are not commercially available. Other types of storage—pumped hydroelectric storage (PHS), compressed air energy storage (CAES), flywheels, capacitors, sodium-sulfur (NaS) batteries, vanadium redox (VRB), zinc-bromine (ZnBr) and polysulfide bromine (PSB) flow batteries, superconducting magnetic energy storage (SMES), solar fuel, thermal energy storage (TES), and liquid air storage are analyzed in reference [34]. Most of these solutions are incompatible to EVs both in terms of costs and deployment issues, as well as (lack of) maturity, or they have poor performance, such as energy or power density.
Figure 6 provides a visual representation of the power and energy densities of the main types of storage, according to the characteristics detailed in Table 4, emphasizing on range (cycle life) associated to specific energy, and acceleration, associated to specific power.
Table 4 presents both the disadvantages and advantages of the batteries used for providing propulsion to small EVs. In Table 5, the performance of other types of lithium and nickel batteries is analyzed.
Due to the increased weight of lead-acid-based batteries, the losses associated to lead can become 5 to 10 times greater for smaller EVs than for conventional motorcycles, as seen in Table 3. In a similar fashion, the losses associated to lithium-based and nickel-based batteries, presented in Table 4 and Table 5, can become very relevant in terms of environmental impact. As recommended in [29], for a large-scale deployment of EVs, less lithium must be used per unit of battery storage, or a suitable type of energy storage system that does not use lithium must be developed. This is justified by the cumulative demands of EV/PHEVs that could exhaust the whole lithium reserve by 2050, even with extensive recycling. The main alternatives to batteries are supercapacitors (SC) and hydrogen fuel cells (FC). In Table 6, their characteristics are compared to Li-ion batteries.
Due to the low operating voltage, symmetric hybrid supercapacitors were not considered for analysis in Table 6, as discussed in reference [65]. Also, according to reference [66], Li-ion batteries cannot withstand more than 1000 cycles per lifetime, which contradicts many other studies that claim thousands of life cycles.

One approach to avoid battery losses is to use other storage elements, such as FC and SC. For example, by using hydrogen fuel cells, one can implement a hydrogen bike. An e-bike is compared with a hydrogen bike in terms of environment, health and energy impact in Table 7.
The possibility to develop a hybrid e-bike, based on fuel cells and batteries, is analyzed in Table 7. In reference [68], different stages of hybridization for a 54 kW light electric vehicle (LEV) are discussed in terms of costs. The storage solutions and combinations include three storage elements: batteries, supercapacitors and hydrogen fuel cells. The costs range from approximately $23,000–34,000 USD, depending on the hybrid combination (SC-FC, battery-FC, and SC-battery) or standalone storage solution (FC and battery). The lowest prices were obtained for the hybrid storage implementations (battery-FC and SC-FC) and the highest for the FC implementation.

As discussed in reference [68] and shown in the last rows of Table 7, EV operation can be split between the battery and other storage elements. This is the second approach that aims to reduce the battery dependence. Table 8 compares hybrid e-bikes to e-bikes, e-scooters, and e-motorcycles in terms of performance. According to the eco-indicators detailed in [39], both e-bikes and conventional bikes have the lowest impact on environment. One of the main reasons for these results can be attributed to the reduced demand of energy of these vehicles. E-bikes also have a battery disposal impact that is two to three times higher than that of big and medium e-scooters. In order to reduce the battery dependency even more, hybrid e-bikes could be seen as a better alternative.
Most e-bikes (pedelecs) present the following features: the motor is placed on the rear wheel [17], have a 26 inch wheel [17,18], the charging time is between 4 and 6 h [17,18,72], the number of life cycles is between 500 and 1000 [17,18,69], and the overall efficiency is 86% [75]. There are also e-bikes that use SC as a storage element, such as [58,60,74]. SCs have a greater number of life cycles (see Table 5) and the charging time is much lower: below 1 min [74]. In order to comply with the different power regulations for e-bikes throughout the world, mainly in the 250–750 W range, many implementations have considered 250 W as the maximum power delivered to the e-bike, such as references [17,18,72].
Other implementations have considered greater power ratings in order to increase the speed and, thus, the range. In reference [73], for reaching speeds of 25 km/h, the maximum power delivered was 950 W. In reference [76], for a speed of 32 km/h and a slope of 3% the maximum power reached was 1018 W, which is similar to reference [74]. Bigger e-bikes, like the one presented in reference [75], go up to 2000 W. Based on the second approach, we have designed a hybrid e-bike that splits the operation between the SC and the Li-ion battery, as illustrated in Figure 7. For the design of our hybrid e-bike, the ratio between battery and SC capacitances was set in order to compensate for the e-bike’s maximum kinetic energy by functional SC capacitance. The performance and economic impact of this implementation is compared to other PEVs and medium BEVs, known also as LEVs, in Table 9 and Figure 8.

Due to the shortages in the methodologies used for improving the sustainability of e-mobility (EVs) and lack of solutions for designing hybrid EVs that can offer the right balance (or compromise) between sustainability challenges (economic, societal, and environmental) and performance and technology constraints (dependent on application), the main findings of this paper tackle these issues, consisting in the proposal of an appropriate framework based on LCA and performance analyses for testing the sustainability of EVs, for most sustainability challenges and the sizing of HESS for a hybrid e-bike, based on SC and Li-Ion batteries storage, for optimal personal electric vehicle operation. This can be seen as an e-mobility solution.
The research question we have addressed in the introduction can be easily reformulated—is our hybrid e-bike sustainable? In Table 9, we have analyzed our solution in terms of sustainability, mainly energy consumption, autonomy, costs, and battery disposal. Improvements were observed in all of these categories, plus the life span of such electric vehicle is much better than that of a conventional e-bike from 1–2 years to 2–4 years, as a result of storage hybridization in conjunction with its appropriate sizing.
A compromise was obtained by modifying the ratio between the two storage system component capacitances (battery and SC). This can represent an optimization method for reaching an overall performance of EVs, and implicitly the sustainability goals. We have put in practice this method by developing a hybrid e-bike that is similar in weight to a normal e-bike (<30 kg), but it is able to deliver more power (up to 1800 W, instead of 250–750 W for an e-bike), which is at the same level with a big e-bike that weighs around 60–100 kg. The sustainability goals discussed and delivered by the article were compared to that of other implementations, in order to highlight the strengths of our solution. The methodology we have used was adapted to the application’s requirements (hybrid PEVs for e-mobility), paving the way to the deployment of new strategies and procedures necessary to fulfill the sustainability challenges presented herein. 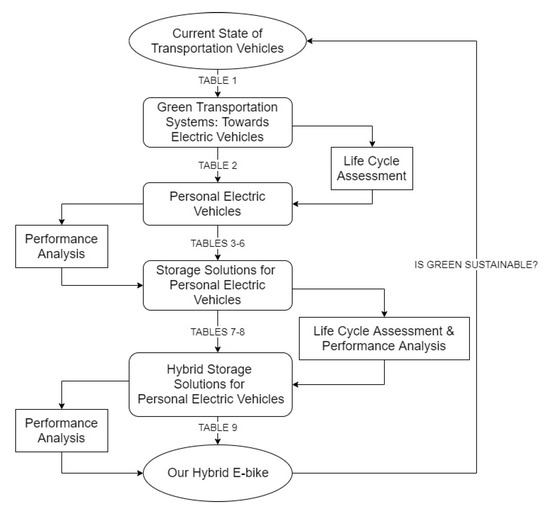 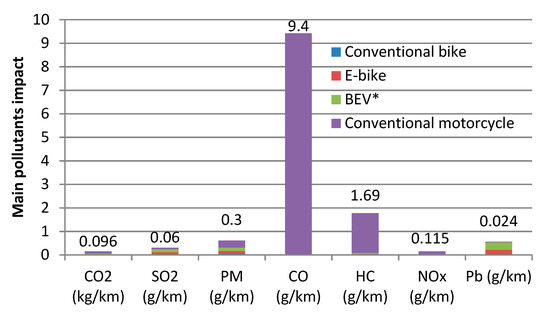 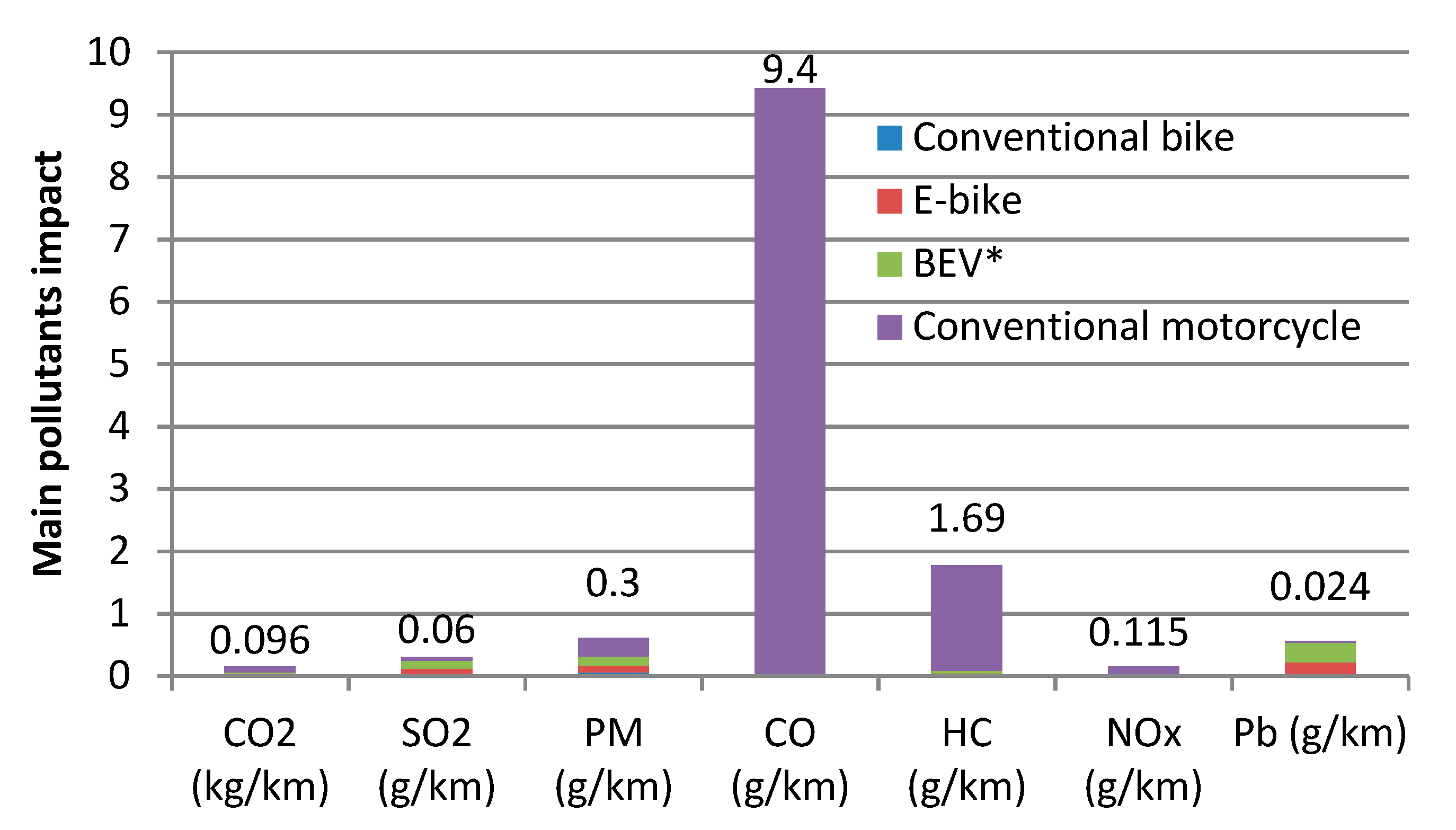 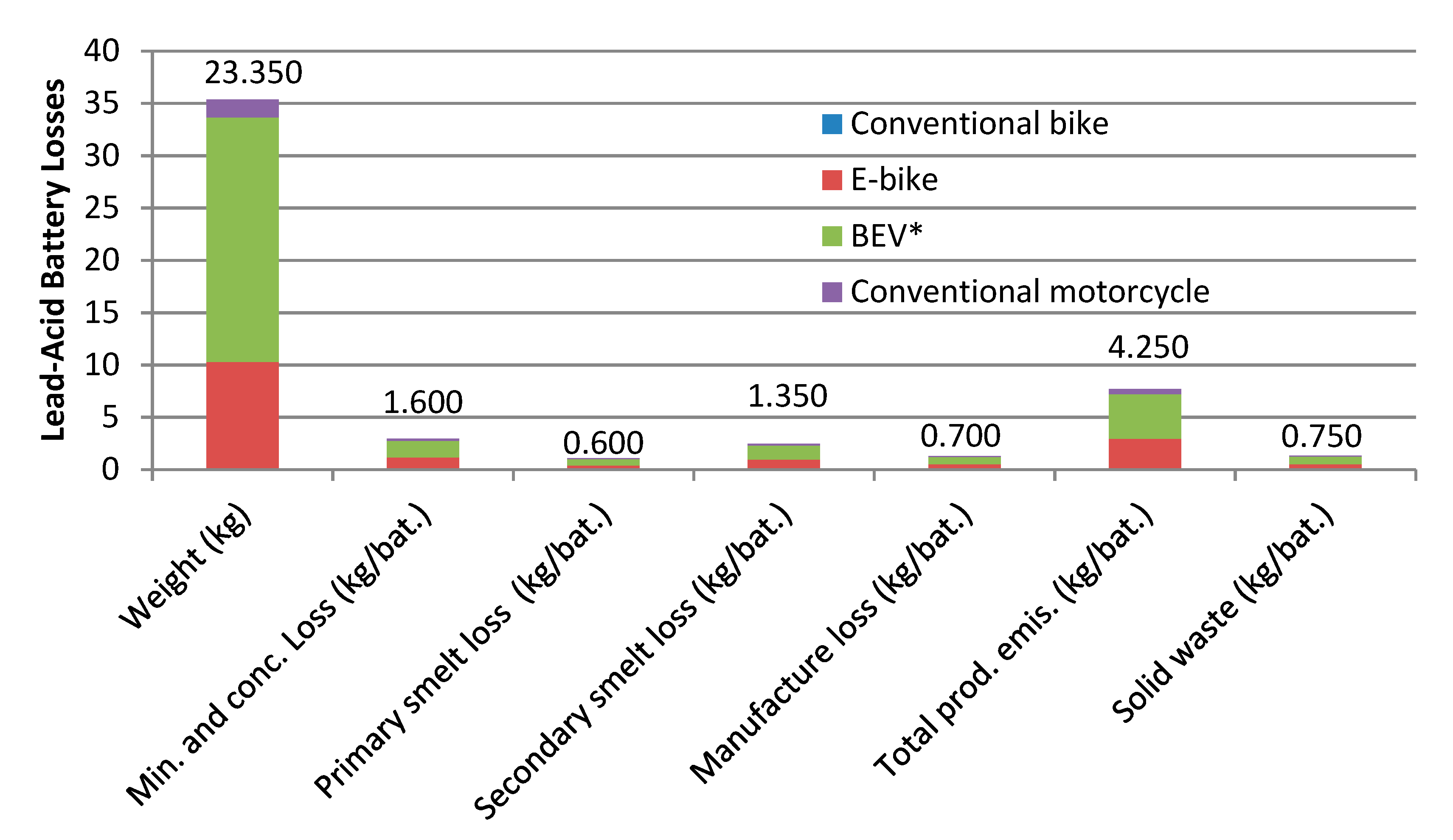 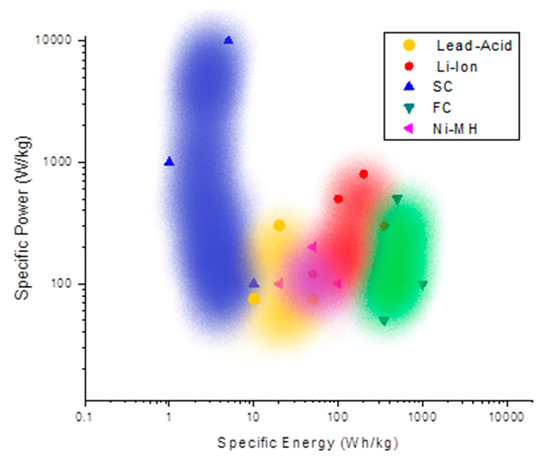 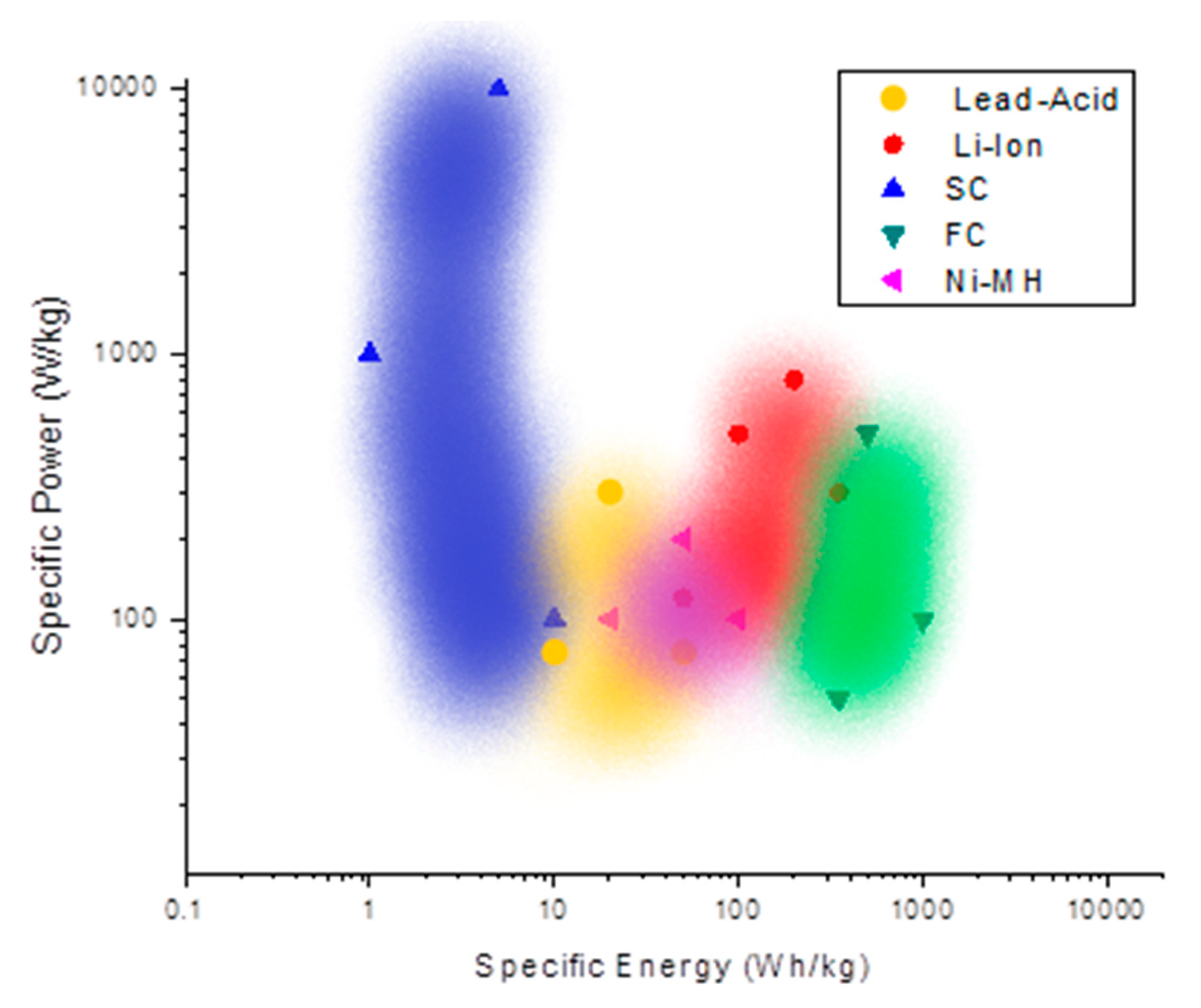 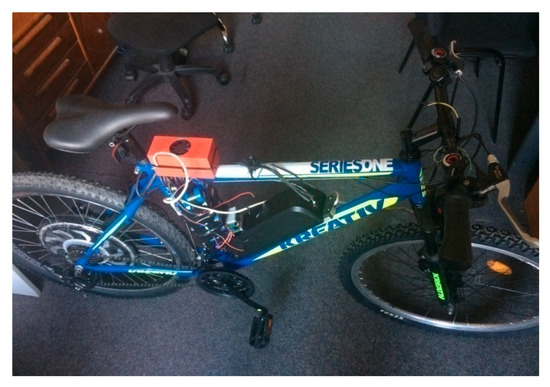 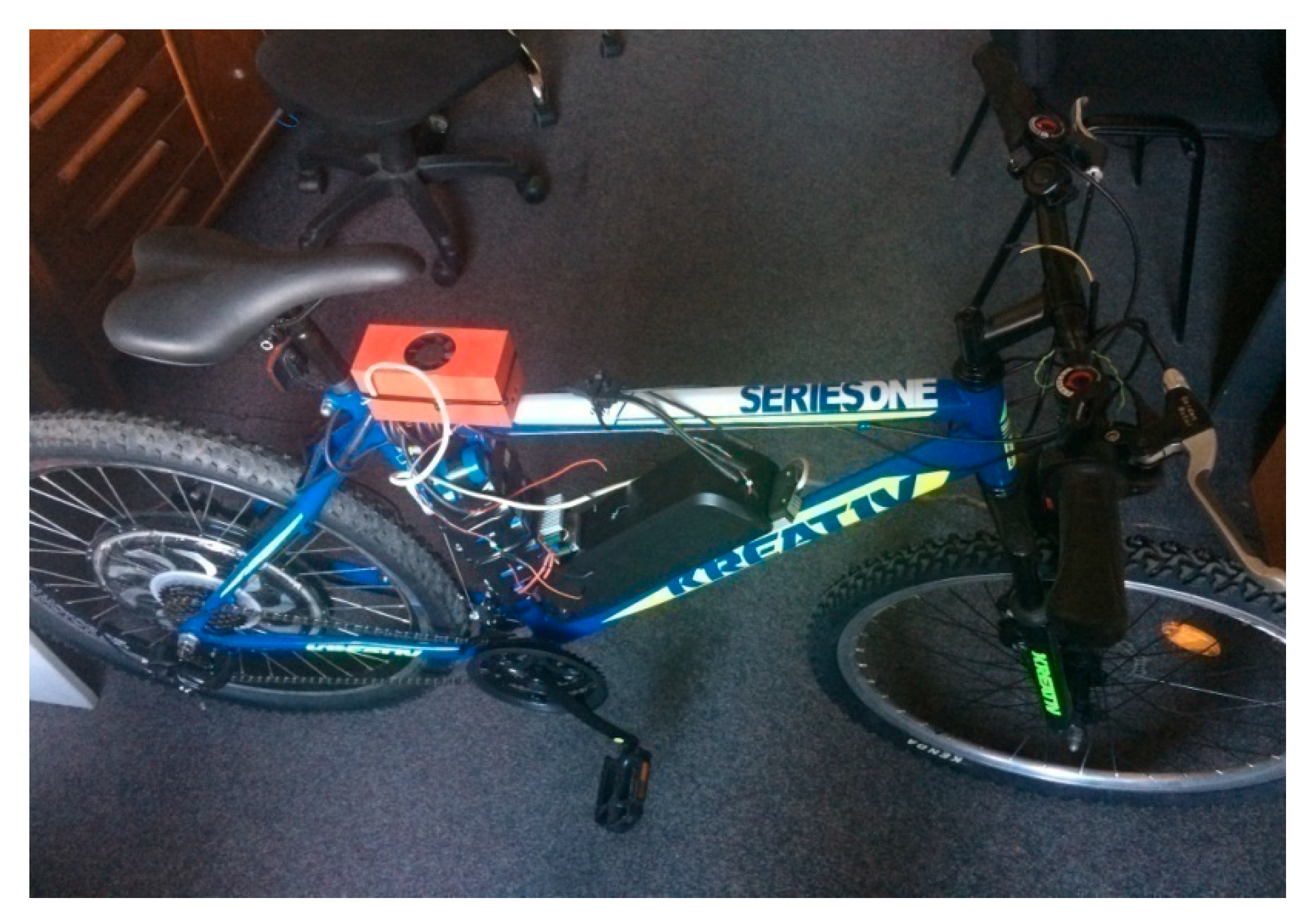 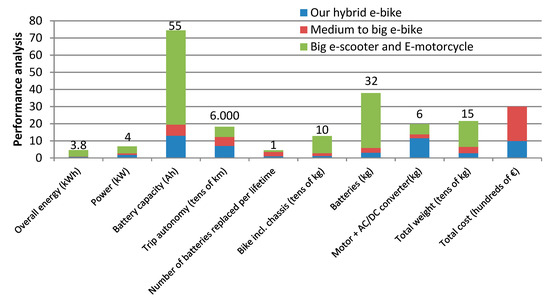 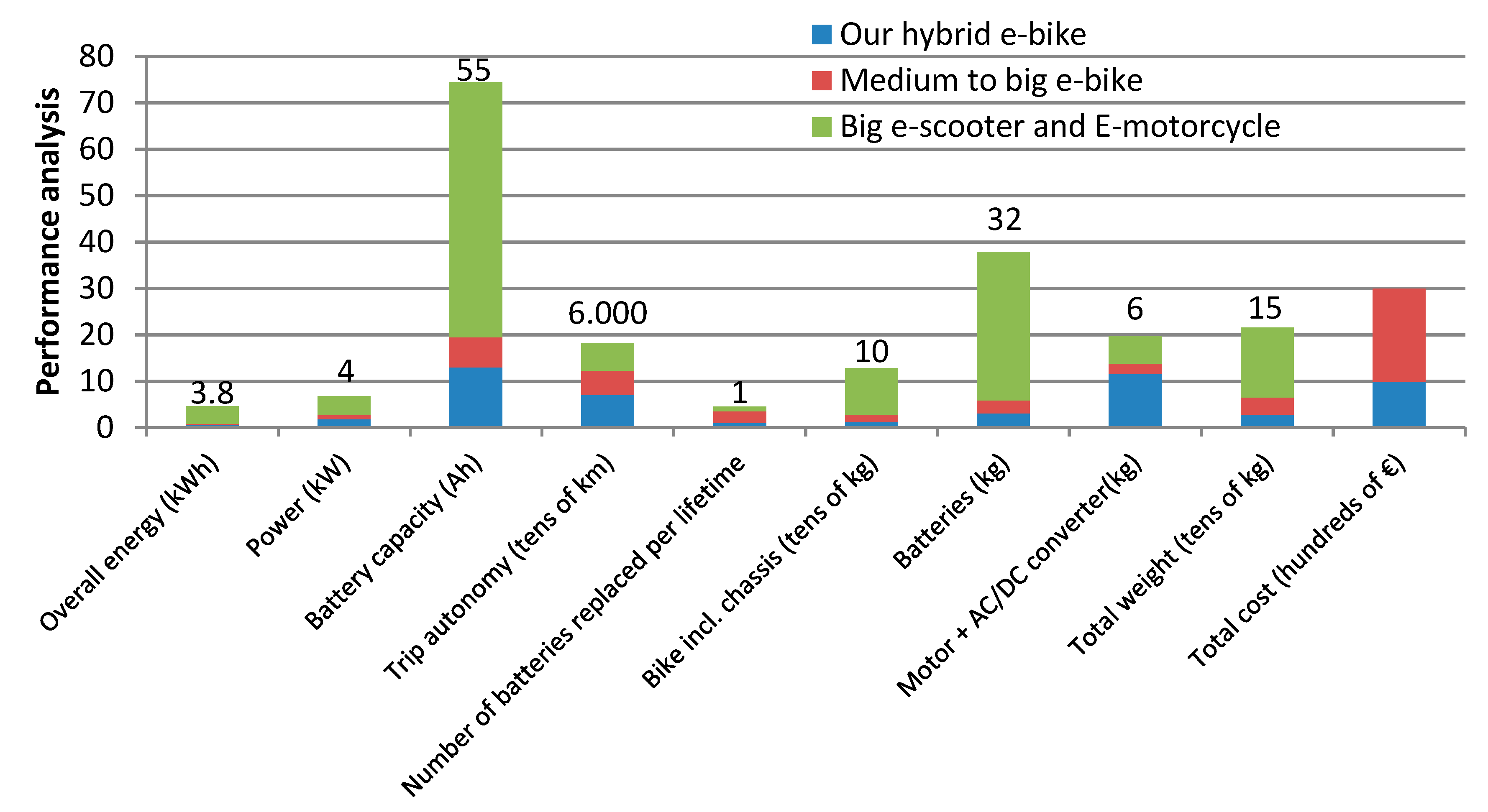