Data Mining and Machine Learning to Promote Smart Cities: A Systematic Review from 2000 to 2018
Next Article in Special Issue

The methodology used in this paper is based on the in-situ monitoring of two classrooms in a school building in Seville (Southern Spain). An external egg-crate shading device was installed in one of the classrooms while the other was left in its original constructive configuration. The ambient and lighting variables recorded are air temperature, surface temperature of walls, aperture of windows, indoor and outdoor illuminance, rolling shutter aperture levels, and incident solar radiation on the window apertures. Monitoring was carried out during three distinct seasonal periods (winter, summer, and mid-season) under real user patterns, allowing for the simultaneous comparison of the performance of both classrooms under the same outdoor conditions.
A descriptive statistical analysis was conducted using the integrated development environment (IDE) of Matlab [42]. Unlike the earlier research [41], this paper focuses on the analysis of the influence of the egg-crate shading device on different ambient variables related to indoor comfort: incident solar radiation (W/m2), indoor operative temperature (°C) and indoor natural illuminance (lux). To assess the real impact of the device, different occupied and unoccupied periods were selected. In the unoccupied period, rolling shutters were totally open and windows fully closed. Thermal comfort in the occupied classrooms (% comfort hours and operative temperatures in °C) and indoor natural illuminance (lux) were analyzed. The aim was to assess the real influence of user patterns on two variables freely controlled by users: window aperture and rolling shutter aperture levels.
In order to facilitate comprehension, this research analysis (Section 4) is divided into several subsections. The first presents the impact of the egg-crate shading device on the solar radiation incident on the windows during the winter, summer, and mid-season periods selected. The second corresponds to the analysis carried out during the unoccupied period, where the real influence of the solar radiation on the indoor operative temperatures and indoor natural illuminance levels (rolling shutters totally open) was studied. The final subsection analyzes the egg-crate shading device from the IEQ perspective, considering occupied periods and taking the influence of users into account. Thermal comfort and natural illuminance results are reported.

In order to determine the comfort band of the ISO 7730:2005 method, the parameters considered were an average relative humidity of 50%, an interior predicted percentage of dissatisfied (PPD) below 15%, a metabolic rate of 1.2 met, and a thermal resistance of 0.5 clo in summer and of 1.2 clo in winter and mid-season. Hence, the thermal comfort bands established were 16.1–24.1 °C for winter and mid-season and 22.8–26.8 °C for summer.

2.2. Considerations for the Daylight Environment Analysis

To guarantee adequate indoor lighting conditions, standard EN 12464-1:2012 [43] was used for the natural daylight environment analysis. This standard establishes minimum average illuminance values for the working surface to design the artificial lighting system, depending on the type of building. However, in this paper this standard is used to establish reference values for qualifying indoor lighting conditions in both classrooms. EN 12464-1:2012 recommends a minimum average illuminance level on the work surface in a classroom of between 300 (secondary school) and 500 lux (adult education). In addition, the Spanish safety code in place [44] establishes a minimum of 100 lux to facilitate circulation and the evacuation of indoor spaces.

In this research, a public educational building managed by the Andalusian government, Martínez Montañés Secondary School, was monitored. This building is located in Southern Spain, in a Mediterranean climate city (latitude 37.37° N and longitude −5.97° W). Two south-facing 6.95 × 6.85 m classrooms on the second floor of the building (Figure 2) were monitored.
Figure 2 also includes the position of the measurement devices described in Section 3.3.
Both classrooms preserved their original external shading protection, consisting of rolling shutters made of PVC plastic. Additionally, an external egg-crate shading device was installed in Classroom A (Figure 3). Classroom B maintained the conditions from the original construction, for use as reference in the analysis.
Each classroom has four window modules 2.40 m high by 1.40 m wide, facing south, with aluminum frames and a 4 mm single glazing (U = 5.70 W/m2·K, no thermal bridge). The window surface represents around 53% of the facade of each classroom. Each classroom has a capacity of 35 students and lessons take place both in the morning from 9:00 a.m. to 3:00 p.m. (secondary education) and in the evening from 5:00 p.m. to 8:00 p.m. (adult education).
In both classrooms, the air-conditioning consists of a direct expansion heat pump and two wall indoor units with an exterior inverter unit. Moreover, both classrooms include an artificial lighting system, with four luminaires with two 36 W fluorescent lamps each.

The solar protection system design is made of tongue-and-groove joint 3-mm-thick white methacrylate slats. The lattices are 1200 mm high, 800 mm wide, and 30 mm thick, forming small 43 × 43 mm lattices.
The egg-crate shading device was installed outside the window, 0.20 m away from the external facade line and 0.35 m from the glazing surface. An external auxiliary steel structure was assembled to create a 1640 × 2440 mm frame for the device.
This shading device was manufactured using a laser cutting machine in the Digital Fabrication Laboratory of the Higher Technical School of Architecture of the University of Seville (FabLab).

The monitoring system, installed according to EN ISO 7726:2011 [45], consisted of nine data loggers recording information at 10 min intervals. This information was stored and uploaded by mobile card every 30 min to a file transfer protocol (FTP) server.
Table 1 shows the technical characteristics of the sensors used for monitoring the classrooms.
There were two monitoring panels in each classroom, with two data loggers each (four data loggers per classroom). The first stored information related to the electric consumption of the artificial lighting system. The second data logger was connected to a presence detector (indoors), four sensors to measure the rolling shutter aperture levels, four sensors to record the aperture of the windows, and four lux meters (three indoors and one outdoors). It is important to stress that, as the presence detector only registered information about classroom occupancy (occupied or yes vs. unoccupied or no), there was no information on the real number of students occupying the classroom at any time. Indoor surface temperature sensors were incorporated into the third data logger, while the fourth integrated four air temperature sensors, all inside the classroom. This data logger also recorded information from the pyrgeometer (outdoors) and pyranometer (outdoors). The pyranometer was placed vertically, between the egg-crate shading device and the rolling shutters of the windows (Classroom A). In contrast, for Classroom B, the pyranometer was placed vertically on the unobstructed facade in order to measure the incident solar radiation.
There was also a third monitoring panel outside the classrooms, with the ninth data logger. This last data logger controlled the electricity consumption of the air-conditioning system (AC), recording information on power consumption (W), voltage (V), and electric current (A).
A local weather station, located in some test cells at a distance of 450 m [46], was also used to record outdoor air temperature. The characteristics of the sensors used in the weather station were units in °C, a range between −40 and +80, and an accuracy of ±0.15 ±0.1%. The thermometer was placed facing north to avoid direct solar radiation.

Both classrooms were monitored for a whole year: from May 2017 to April 2018. This paper presents the results of the analysis of solar radiation levels (W/m2), indoor operative temperatures (°C), and their relation with thermal comfort and indoor natural illuminance levels (lux). Data were recorded in the classrooms during three representative seasonal periods: winter, summer, and mid-season. The periods considered for the protocol selection were those with 10% or less data lost. Moreover, the selection of the summer period also took into consideration the fact that the academic year ends in mid-June. The characteristics of the periods analyzed are shown in Table 2.
Additionally, an unoccupied period of 120 h (18–22 April) was selected for analysis to obtain objective results of the real performance of the egg-crate shading device without considering user influence. Specifically, the influence of solar radiation on the indoor operative temperatures (°C) and indoor natural illuminance (lux) was assessed, considering the rolling shutters to be fully open.

In this paper, the use of an egg-crate shading device for retrofitting an educational building in Southern Spain was assessed, monitoring a classroom in real use conditions and comparing its performance with that of another monitored classroom without egg-crate shading devices and under the same outdoor conditions. Natural illuminance (lux) and indoor operative temperatures (°C) were evaluated during an unoccupied period. The influence of users on thermal comfort (% comfort hours) and indoor natural illuminance (lux) was also assessed during three occupied periods (winter, summer, and mid-season), during which solar radiation (W/m2) was also analyzed. The main conclusions of this research can be summarized as follows:
As future research, the authors are currently working on the construction of a predictive model based on the egg-crate shading device designed and the data monitored in order to assess different geometrical conditions (size of the device and cells, distance from the window, etc.) for different orientations and latitudes. The final objective will be to obtain an optimized design solution for this type of external shading devices.

This research was funded by the Ministry of Economy and Competitiveness of the Spanish Government and the European Regional Development Fund through the research and development projects “Energy Rehabilitation of Tertiary Buildings in Mediterranean Climate by Optimizing Solar Protection Systems” (ref BIA2014-53949-R) and “Parametric Optimization of Double Skin Facades in the Mediterranean Climate to Improve Energy Efficiency Uncer Climate Change Scenarios” (ref BIA2017-86383-R). C.M.C.-G. wishes to acknowledge the financial support provided by the FPU Program of the Spanish Ministry of Education, Culture and Sport (FPU17/01375). 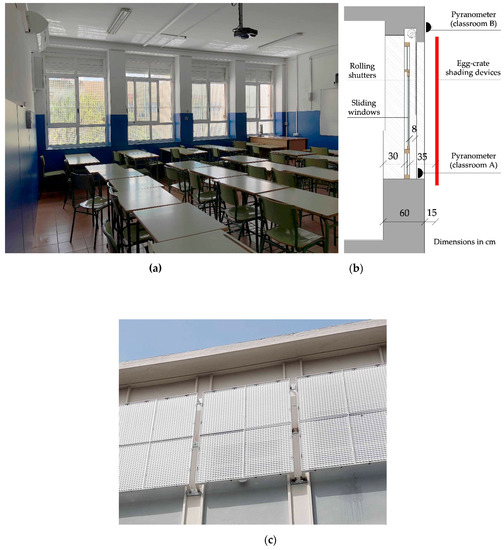 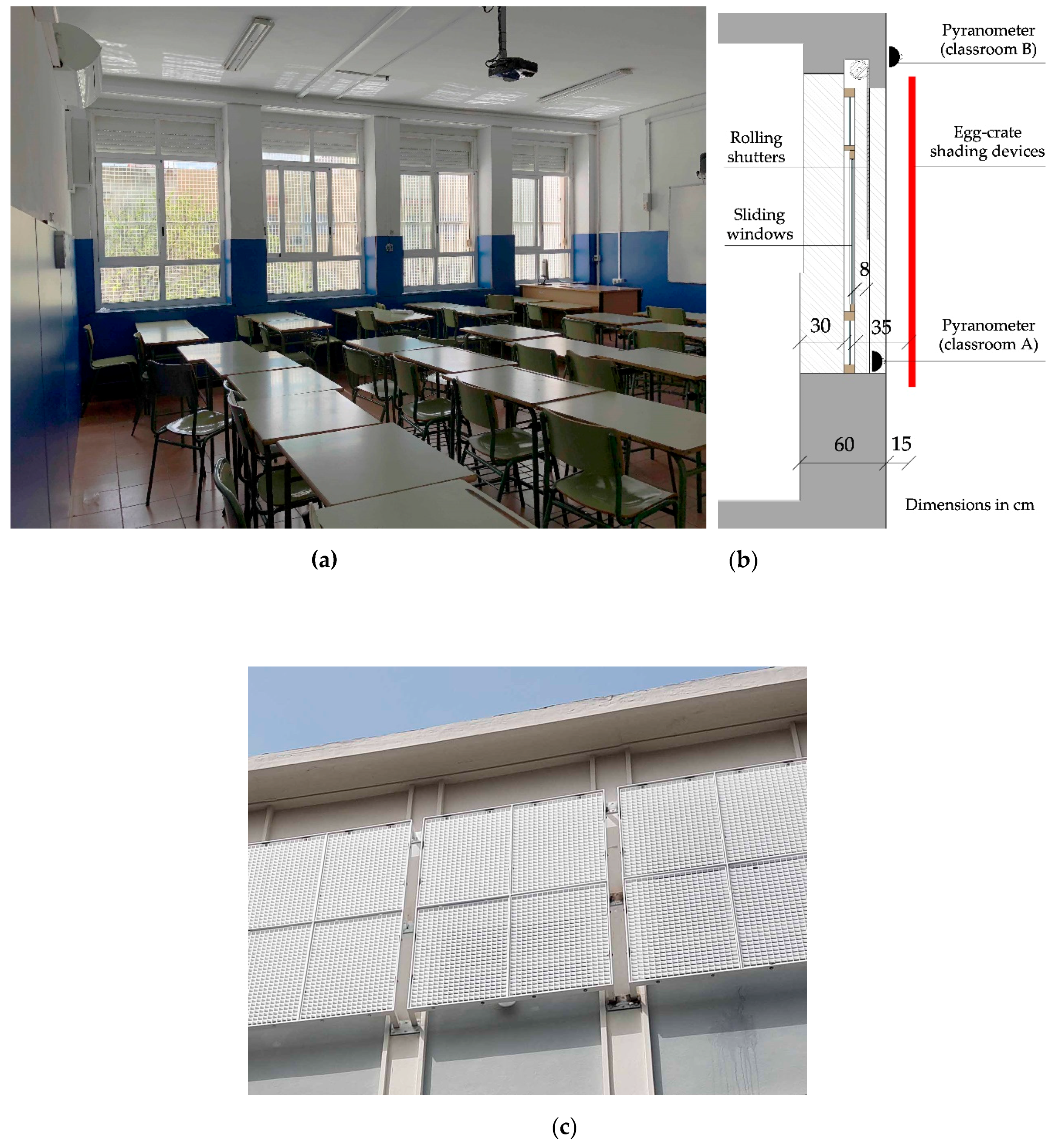 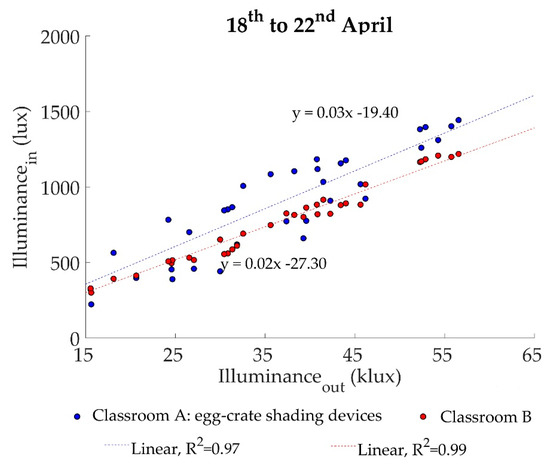 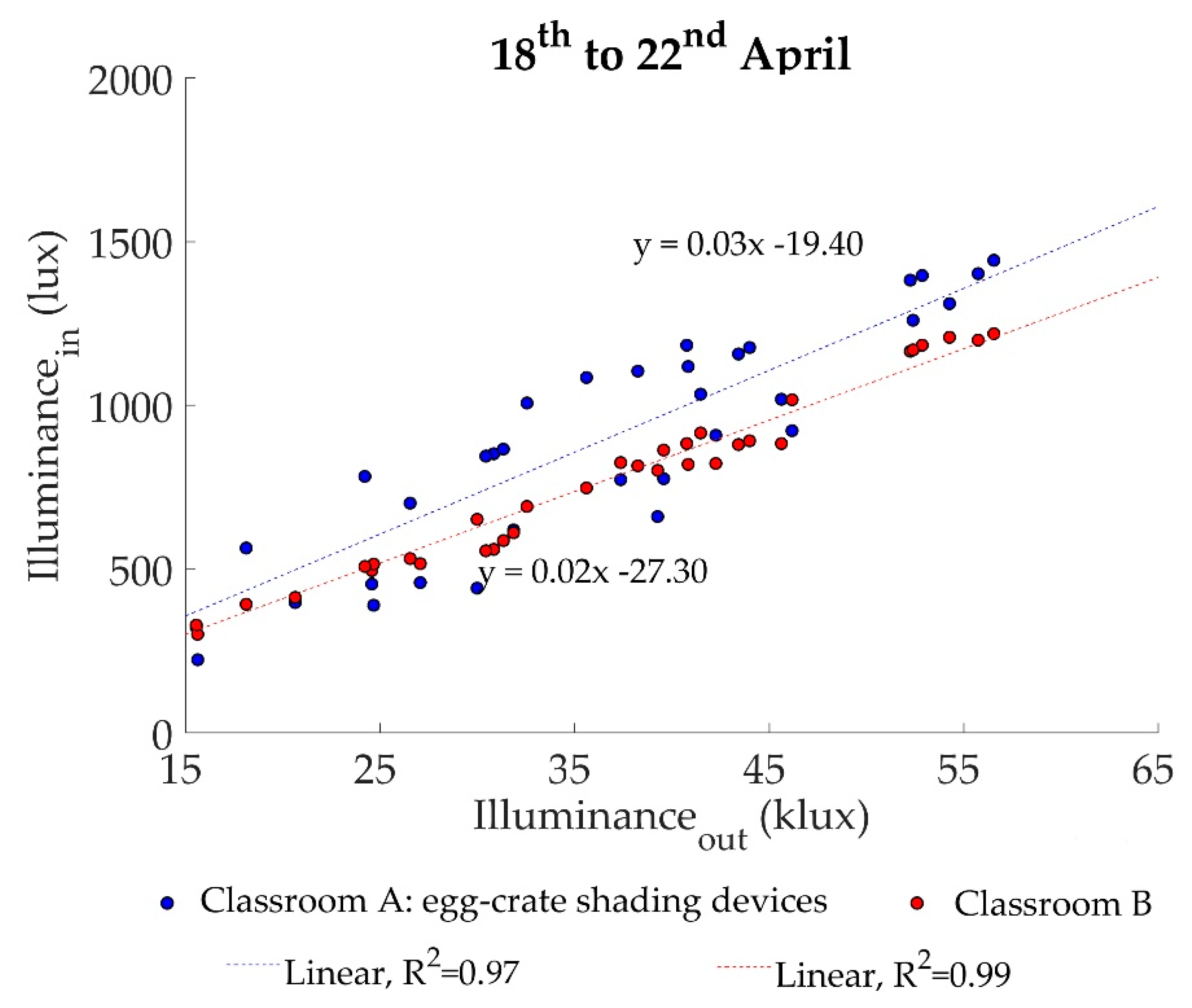 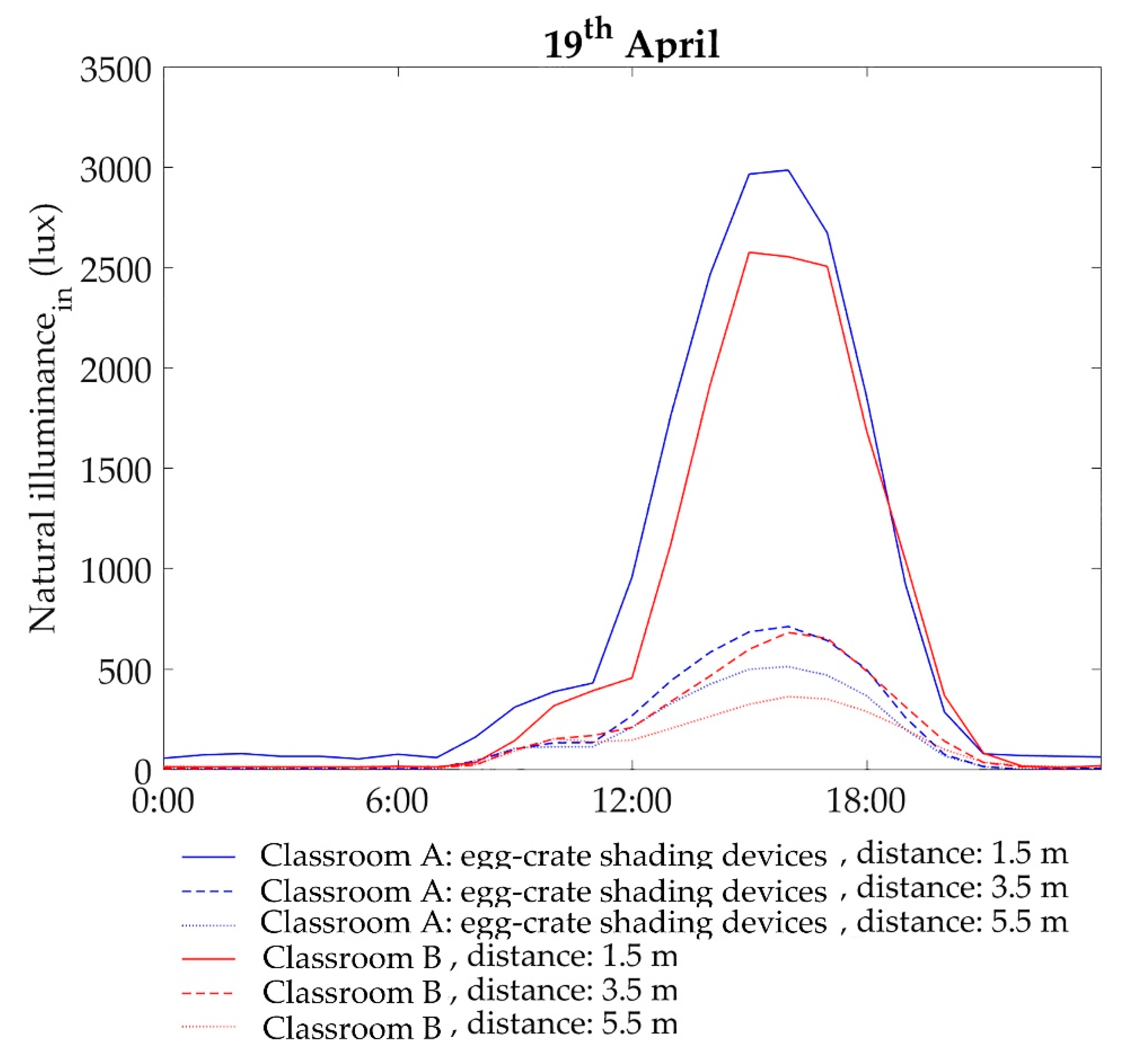