A Geoarchaeological Reading of the City-Overlap-City Phenomenon in the Lower Yellow River Floodplain: A Case Study of Kaifeng City, China
Previous Article in Journal

The Market Treadmill Against Sustainable Income of European Farmers: How the CAP Has Struggled with Cochrane’s Curse
Previous Article in Special Issue

Ancient Organic Residues as Cultural and Environmental Proxies: The Value of Legacy Objects

The Sacred Landscape of the “Pyramids” of the Han Emperors: A Cognitive Approach to Sustainability

:
The so-called “Chinese pyramids” are huge burial mounds covering the tombs of the Emperors of the Western Han dynasty. If we include also the mounds of the members of the royal families, these monuments sum up to more than 40, scattered throughout the western and the southern outskirts of modern Xi’an. They are mostly unexcavated and poorly known, although taken together, they form a fascinating sacred landscape, which was conceived as a perennial witness of one of the most magnificent Chinese dynasties. This sacred landscape is today encroached by the frenetic urban development of the Xi’an urban area. We discuss and elaborate here some of the results of a recent, new satellite-imagery survey of these monuments, highlighting the aspects which may contribute to solutions for sustainable and compatible development within this important ancient landscape.
Keywords:
Chinese Pyramids; Han Dynasty; Feng Shui; protection of ancient landscapes

The Western Han dynasty of ancient China (202 BC–9 AD) marked important political, economic, and scientific developments. The Han rulers followed the custom initiated by the first emperor of Qin—whose mausoleum is world-famous due to the terracotta army guarding its eastern side—and chose to be buried in tombs located under huge square mounds of rammed earth, today known popularly as “Chinese pyramids” [1,2].
These monuments are located in the outskirts of Xi’an (see Figure 1 for a general map of the area). A main group of them, composed by 9 emperor’s tombs and 21 satellite tombs of members of the royal families, is located along the northern bank of the river Wei, close to the airport and subjected in recent times to high population growth and urbanization within the so-called “Xi-xian new area” projects. A second group of monuments is located to the south of Xi’an, not far from other high-impact areas related to high tech and tourism development zones.
The Han mausoleums are thus a fascinating, almost “alien” presence in the rapidly developing landscape of modern China. They have been poorly studied and only two have been (partly) excavated: those of Emperors Jing and Wu. It is rather difficult today, onsite, to have an idea of the ways in which this funerary landscape was conceived, and especially of the visual relationships the monuments bear to each other. This is due to various factors, but chiefly to pollution—which drastically reduces horizon visibility—and to the sheer difficulty of reaching some of the monuments and/or their tops. For these reasons, although I have personally visited many of them, I decided to carry out a new, complete survey using satellite imagery tools. The results of this campaign have been recently fully published in a specialized archaeological Journal [1]. In the present paper, I discuss and expand some of the results obtained, focusing on the problem of the sustainable development of this area so rich in cultural, almost unexplored relics.
The aim of the paper is as follows. Besides the sheer necessity of understanding the minimal dimensions of buffer areas where future excavations might reasonably be carried out, we shall discuss broader aspects based on a cognitive approach to archaeological relics [3,4,5,6] (see Section 2.3 for the methodology used in this paper). As we shall see, this approach can contribute to carrying innovation in linking conservation and sustainable development, not only in the direction of protecting heritage, but also in enhancing present and future senses of place and quality of life.

In ancient China, the emperors chose for their tombs suitable areas in the proximity of the city they elected, or founded, as the capital. This led to the establishment of royal Necropolises, which modelled and rationalized the landscape as sacred landscapes of power, devoted to transmitting the rights to eternal life of the deceased rulers and to establish the rights to the throne of their successors as well. The study area examined in the present paper is the first (in chronological order) of such sacred landscapes: that of the emperors of the Western Han dynasty. The Han capital was in Chang’an (today an area of present Xi’an), and the Necropolis was developed along the northern bank of the river Wei to the northwest, with an addition located to the southeast, which was due to the will of one emperor, Wen, to be buried under a natural mountain and not under a burial mound. The main study area thus extends for about 34 km in the densely populated, rapidly developing territory nicknamed “Xi-xian”, which extends from Xi’an’s western suburbs to the Xianyang urban area and airport.

The monuments have been surveyed onsite whenever possible (some are of difficult or no access). However, they are in any case very difficult to measure due to vegetation, fences, and to the fact that the sides are not always clean. Therefore, we took advantage of the fact that the area is well covered by satellite imagery (both on Google Earth and Bing), with a resolution which is more than sufficient to measure the average sides and average azimuths of the mounds. Another problem that satellite imagery is helpful in solving is that of the ancient horizon. Indeed, the horizon visibility today is very poor—due to pollution—even when the horizon itself is clear of buildings; moreover, sometimes, modern buildings are actually present. Using satellite tools, it is instead possible to establish whether monuments had mutual intervisibility in the past or not. All in all, the available images—in many cases, the historical archive of Google Earth contains more than one image with a sufficient resolution—were extracted and measured with AutoCAD for length of the sides, orientation, and directions of visibility towards other monuments. The results were mediated in the presence of more than one image. Errors have to be expected, of course, but on account of the high quality of the images and of the low projection error associated with them, the intrinsic error expected from this kind of measurement is quite low, so Google Earth is a quite useful tool for this kind of investigation [7,8]. Unfortunately, however, the original heights of the mounds (certainly greater than the current ones) were impossible to determine because the summits have deteriorated considerably (see, e.g., Figure 2).

The approach presented here is that of cognitive archaeology, as developed in the last 30 years or so [3,4,5,6]. In a nutshell, it is an approach to the material relics of human past which aims at describing them as objects that had their primary cultural existence as “percepts” in topological relation to one another. They thus fitted within the cognitive schemes of their creators, and can be fully understood—that is, not only “functionally” understood—only if such schemes are also studied and, as far as possible, understood as well.
A particularly interesting case in such a context is that of sacred landscapes; that is, natural landscapes in which monuments were built in accordance with rigorous criteria, usually connected with power and religion (for a general approach to the relationship between traditional built environments and perceived meaning, see [9,10,11,12]). In the case of such landscapes, indeed, the cognitive approach turns out to be extremely effective; for instance, in the study of ancient Egyptian Necropolises [13,14,15,16]. In such studies, the use of satellite imagery reveals itself as being particularly useful. In fact, it allows to establish the mutual relationships between monuments also in the presence of evolving dynamics of the built features of the landscape. 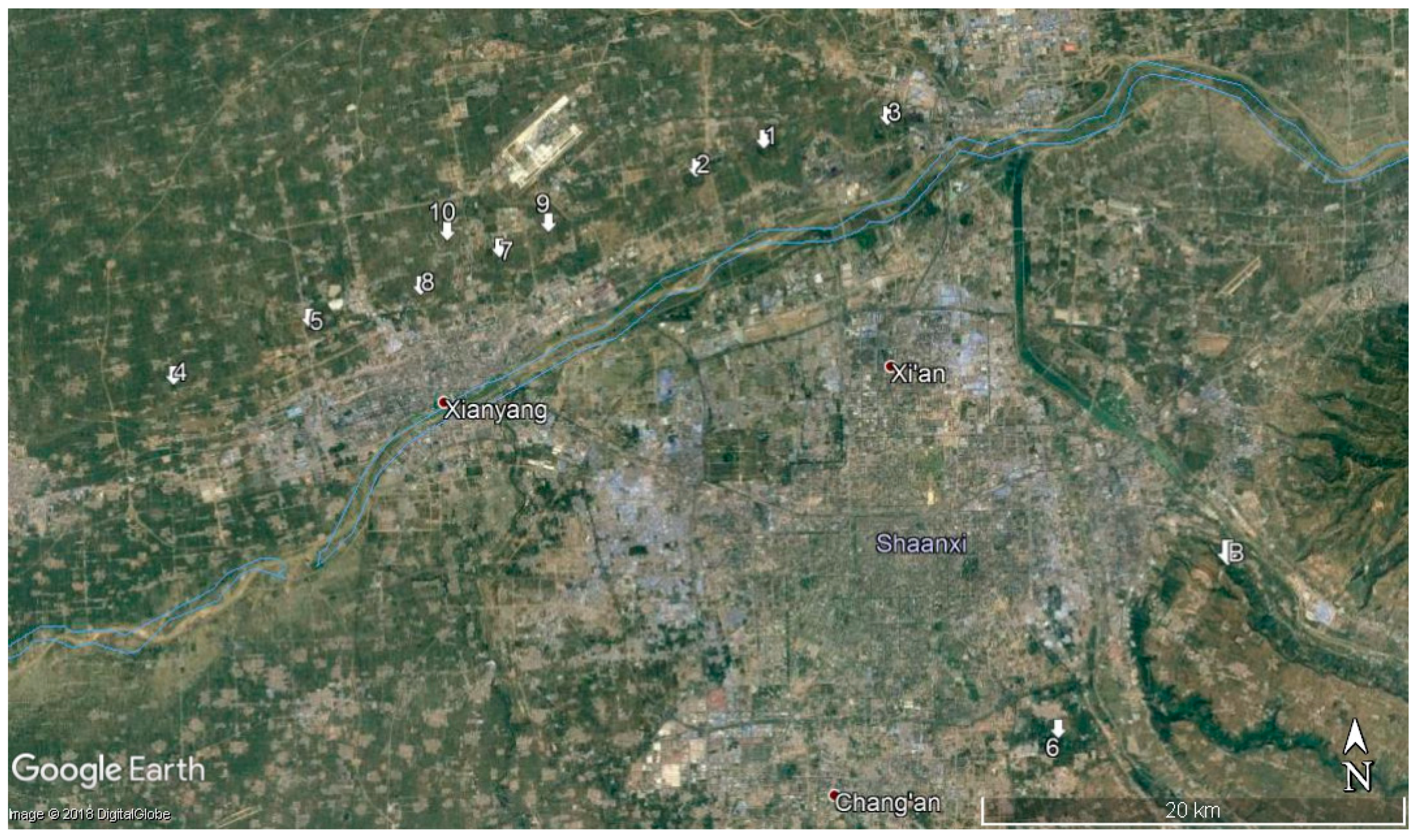 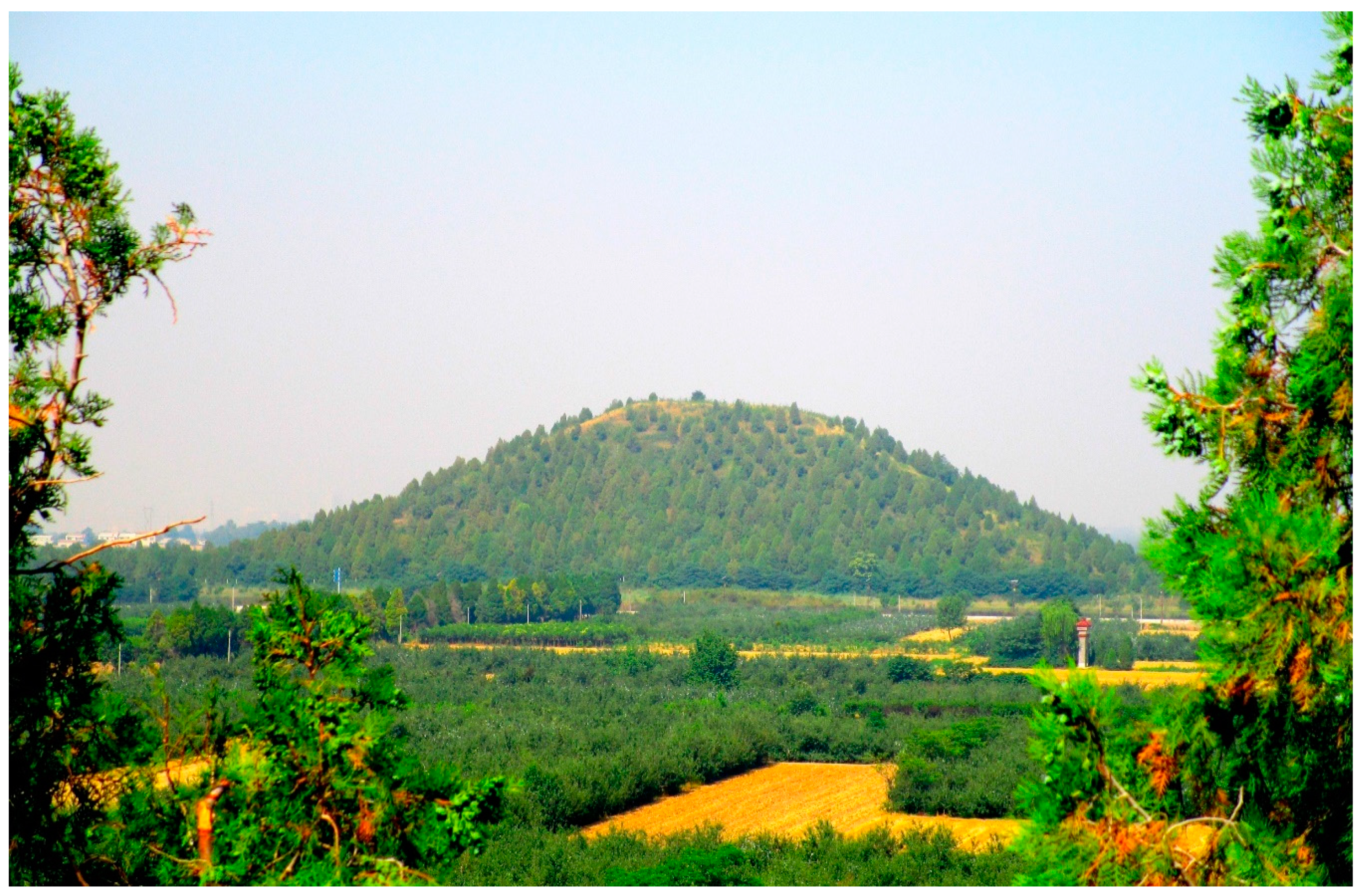 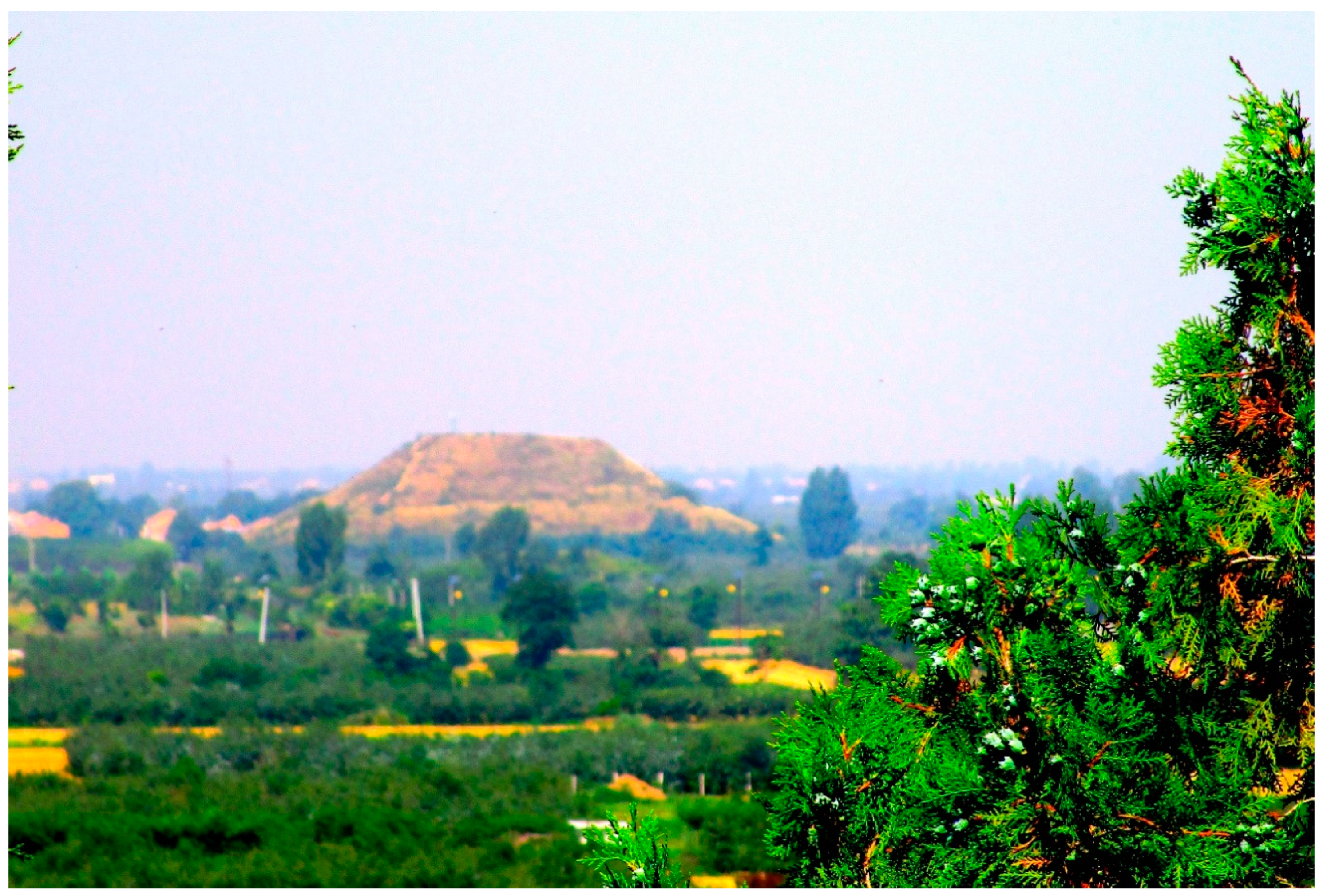