How Is Motivation Generated in Collaborative Consumption: Mediation Effect in Extrinsic and Intrinsic Motivation

There has been a long history of the user decision-making and adoption behavior. Until now, most studies are based on rational behavior theory and planned behavior theory. Among them, the most widely used is the technical acceptance model (TAM) model in rational behavior theory [14,15]. Except that, some scholars also use the theory of effect and the theory of value-based adoption model [16,17]. However, considering user’s intention and behavior only from the perspective of rationality and value is limited.
Self-determination theory believes that it is necessary to consider the motivation from rational and irrational level, and user’s decision-making is driven by both extrinsic and intrinsic motivations. In the original definition, extrinsic motivation refers to people performing certain activities to obtain some separable result, and intrinsic motivation refers to people doing certain activities for inner pleasure and satisfaction [18]. Therefore, to better interpret the motivation to participate in collaborative consumption of users, this paper uses the self-decision theory as the theoretical basis.
The studies based on self-determination theory are divided into two types: one is to directly use perceived usefulness as extrinsic motivation, and the enjoyment as intrinsic motivation to explore the influence on consumer behavioral intention [19,20] and the other is to find different motivations based on the field of research, and classify them into extrinsic motivations or intrinsic motivations according to their characteristics [21,22].
Considering the characteristics of collaborative consumption, this paper proposes the motivations for users to participate in collaborative consumption from rational and irrational level, namely economic benefit, convenience, sustainability, sense of belonging and trust. Combining the two above-mentioned research models of self-determination theory, this study used the motivations related to the characteristics of collaborative consumption as key antecedents of perceived usefulness and enjoyment to explore the internal mechanism of motivation. Among them, economic benefit represents a certain instrumental value, and convenience represents a kind of functional value, which both belong to the separable result that users can obtain, thus economic benefit and convenience were classified into extrinsic motivations and served as antecedents of perceived usefulness. Sustainability, sense of belonging and trust are more related to the satisfaction of different psychological needs, thus this study classified them into intrinsic motivation and as antecedents of enjoyment. Based on the above explanation, considering the context of this study, extrinsic motivation is defined as committing an action because of its perceived usefulness in achieving instrumental and functional value, and intrinsic motivation is defined as committing an action because of enjoyment related to the satisfaction of different psychological needs.

This study adapted measurement items from existing self-determination theory scale, collaborative consumption scale, and supplemented them to capture bicycle sharing user behavior. The survey was delivered to respondents in China. Because it is a survey in China, whereas most of the items are based on English literature, for the accuracy of the description, after translating items into Chinese, this study back-translated them into English for comparison. The English version of the scale items are shown in Table 1. This study used five-point Likert scales; respondents were asked to answer according to their actual perception and experience, by selecting: (1) “strongly disagree”; (2) “disagree”; (3) “neutral”; (4) “agree”; or (5) “strongly agree”.

In this study, data were collected using online and offline surveys of bicycle sharing users between October and December 2017. According to the address of the online questionnaire filled in by users (website background statistics), the questionnaire covered 22 provinces of China including Xi’an, Beijing, Shenzhen, Yunnan, Chongqing, Zhejiang and Shanghai. We collected 412 questionnaires in total with 373 useful responses. The characteristics of the final sample are shown in Table 2. Male and female were evenly split. The median age was 18–25 years. The respondents were educated, with around 82.0% of the total sample holding an undergraduate degree. The proportion of samples using bicycle sharing for 7–12 months was the highest at 22.0%, and the proportion of not using ones was the lowest at 13.1%. Overall, 71.8% of users chose Ofo, which was the largest proportion, while the second largest was Mobike, with 60.1%. Ofo and Mobike are bicycle sharing companies founded in 2014 and 2015, respectively.

The growing collaborative consumption is now bringing huge changes to consumer purchasing and consumption, and will affect their lives in the future. However, collaborative consumption enterprises need to know more about motivation affecting consumer participation to help them to survive, and sustainable development of collaborative consumption needs to capture the real needs of users. In an effort to better understand collaborative consumption, this study developed and tested an original model for explaining consumer outcomes in this new environment based on an extension of the theory of self-determination.
The motivation for participating in collaborative consumption for users are both intrinsic and extrinsic, and extrinsic motivation is a more prominent factor than internal motivation. However, from the perspective of long-term development, with the upgrading of consumption structure, intrinsic motivation cannot be neglected. In extrinsic motivation, the regression weight associated with convenience was larger than economic benefit. This result indicates that, as the living standard rises, economic benefit is no longer the primary factor for users to consider; they pay more attention to the improvement of living efficiency brought by convenience. In intrinsic motivation, trust was the most important factor, which shows that the insecurity and uncertainty caused by the asymmetry of information and the imperfection of the system in collaborative consumption will greatly affect users’ intention. The regression weight of sense of belonging and sustainability had no big difference. Users feel part of the community in collaborative consumption, adding to a feeling of enjoyment and intention to participate. Users realize that participating in collaborative consumption is an activity that protects the environment and saves resources, thereby increasing inner satisfaction and participation intention.
The model in this study not only makes a significant contribution to the emergent stream of literature on the sharing economy, but also enriches the theory of self-determination. This study found that factors related to collaborative consumption or perceived usefulness and enjoyment did not affect intention alone. In fact, perceived usefulness and enjoyment as mediating variables, and variables related to collaborative consumption were key antecedents of them. Particularly, enjoyment played a full mediation between sense of belonging and participation intention. This study contributes by discovering the important role of perceived usefulness between instrumental/functional value (i.e., economic benefit and convenience) and participation intention, and the important role of enjoyment between psychological needs (i.e., sustainability, sense of belonging and trust) and intention. The final research model not only provides a comprehensive coverage of extrinsic and intrinsic factors to understand consumer self-determination behavior, but also explores the internal mechanism of motivation in a collaborative consumption context.
This research has implications for practice of collaborative consumption stakeholders.
From the perspective of extrinsic motivations, economic benefit and convenience should be considered to improve consumers’ perceived usefulness and intention to participate. Enterprises can increase consumers’ economic benefit through discount and free strategy, thereby enhancing their usage habits and “stickiness”. However, enterprises also need to consider the negative effects of single economic stimulus, relying solely on low-price strategies does not have the momentum for sustainable development. In terms of convenience, enterprises should increase innovation in product function design, make it simpler, and let users get feedback as soon as possible. In the product launch, scientific planning and layout should be made so that resources and users can match quickly and accurately, saving users time and effort.
From the perspective of intrinsic motivations, psychological needs on trust, sense of belonging and sustainability should be focused to enhance consumers’ enjoyment and intention. In terms of trust, enterprises should transfer positive information through social media to establish a good reputation; they can also establish special complaints and suggestions channels and provide timely feedback so that users can have ways to compensate for the loss of profits to reduce the user’s inner insecurity. Meanwhile, enterprises should establish a comprehensive mechanism to protect the privacy of consumers. From sustainability, products or services should be closely linked to the theme of “green” and “environmental protection” and root it in the heart of users, so that they feel that using the products or services is conserving resources and contributing to the ecological environment, thereby creating a pleasant experience. For example, some shared bicycle companies organized various activities with other Internet green public welfare departments to stimulate users to form a conditional reflection between bicycle sharing and environmental protection. For the sense of belonging, enterprises should be committed to building communities to satisfy users’ social relationship needs. Sabitzer et al. [35] found communities should reduce conflicts through soft regulation to promoting sustainability in sharing economy. Community managers can encourage community members to cooperate with each other through physical rewards, virtual points, level promotion, etc., or interact with community users online or offline, so that users can feel that they are members of a product or service community, thereby increasing pleasure and intention to participate. For instance, DiDi, a car-sharing company, organizes offline communication activities “Di Di Park” from time to time and provide gifts to users.
This study has limitations that point to the directions of future research. First, collaborative consumption has various types, and bicycle sharing is just one of them; other collaborative consumption types should be used to test the model in the future. Second, there is a lack of diversity in the sample; because young people with higher education are more open to collaborative consumption, a new concept, and they are the main users of its products and services, they are the majority in the survey. It is expected that more middle-age consumers will join collaborative consumption and future studies may include them in the samples to test the model and compare the results. Third, conducting the research in a certain environment and country is a limitation. Different contexts could affect different motivations and alter the results. The geographic scope of this work is limited to one country, and future research should aim to collect more observations from other countries involved in collaborative consumption and test the research model.

We would like to express our gratitude to everyone who participated in the survey. 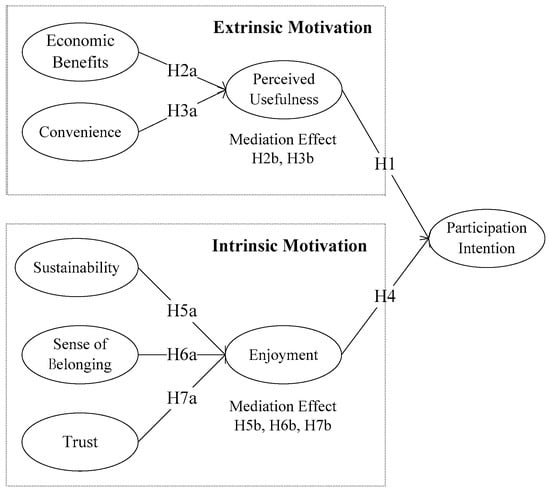 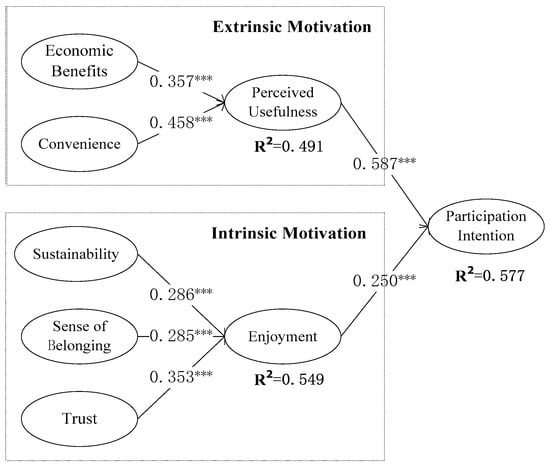 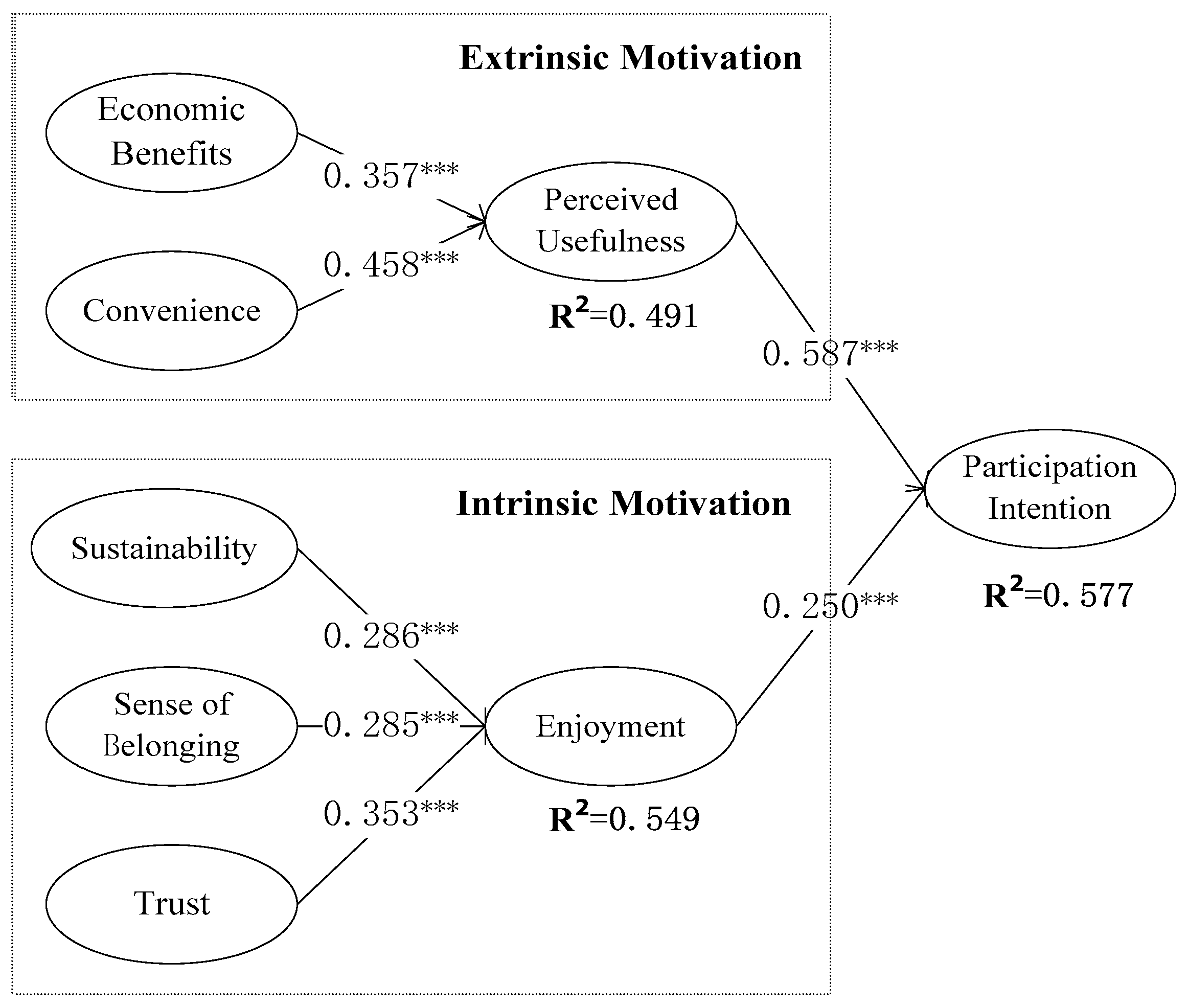