Temporal-Spatial Variations and Influencing Factor of Land Use Change in Xinjiang, Central Asia, from 1995 to 2015
Previous Article in Journal

Green Gross Domestic Product (GDP) is an important indicator to reflect the trade-off between the ecosystem and economic system. Substantial research has mapped historical green GDP spatially. But few studies have concerned future variations of green GDP. In this study, we have calculated and mapped the spatial distribution of the green GDP by summing the ecosystem service value (ESV) and GDP for China from 1990 to 2015. The pattern of land use change simulated by a CA-Markov model was used in the process of ESV prediction (with an average accuracy of 86%). On the other hand, based on the increasing trend of GDP during the period of 1990 to 2015, a regression model was built up to present time-series increases in GDP at prefecture-level cities, having an average value of R square (R2) of approximately 0.85 and significance level less than 0.05. The results indicated that (1) from 1990 to 2015, green GDP was increased, with a huge growth rate of 78%. Specifically, the ESV value was decreased slightly, while the GDP value was increased substantially. (2) Forecasted green GDP would increase by 194,978.29 billion yuan in 2050. Specifically, the future ESV will decline, while the rapidly increased GDP leads to the final increase in future green GDP. (3) According to our results, the spatial differences in green GDP for regions became more significant from 1990 to 2050. View Full-Text
Keywords: Green GDP; Ecosystem service value; Gross Domestic Product; Land Use; CA-Markov Green GDP; Ecosystem service value; Gross Domestic Product; Land Use; CA-Markov
►▼ Show Figures 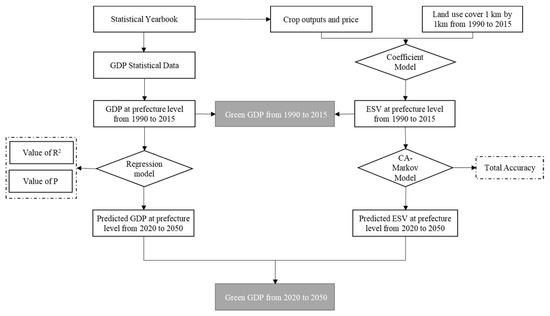