The Adoption of Environmental Management Systems Based on ISO 14001, EMAS, and Alternative Models for SMEs: A Qualitative Empirical Study
Previous Article in Journal

Co-Designing a Citizen Science Program for Malaria Control in Rwanda

The safety of groundwater resources in coastal areas is related to the sustainable development of the national economy and society. Seawater intrusion is a serious problem threatening the groundwater environment in coastal areas. Climate change, tidal effects and groundwater exploitation may destroy the balance between salt water and fresh water in coastal aquifers, leading to seawater intrusion. The threat of seawater intrusion has attracted close attention, especially in the coastal areas of northern China, and the accuracy and efficiency of seawater intrusion monitoring need to be improved. The aim of this study was to fill the blanks in seawater intrusion research in the coastal aquifer of the Daqing River Catchment, northeastern Liaodong Bay, China, and determine the extent and evolutionary characteristics of seawater intrusion in this area. In this study, historical chloride concentration data were used to trace the evolution of the salinization, and electrical resistivity tomography (ERT) was used to supplement the data in areas with limited hydrochemical data and to detect the saltwater/freshwater interface, especially in the area near the Xihai Sluice. The results show that seawater intrusion in the Daqing River Catchment is mainly caused by overexploitation of groundwater. Since 2012, strict controls have been placed on the groundwater exploitation rate, and the chloride concentration of 250 mg/L has receded year by year, with saltwater being significantly reduced by 2018. The Daqing River plays an important role in the saltwater distribution. The Xihai Sluice, located in the lower reaches of the Daqing River, intercepts and controls the seawater intrusion in a certain range by raising the level of fresh groundwater to intercept and control saltwater intrusion within a certain range. The research results also confirmed that a combination of geophysical and geochemical methods is of great value in studying seawater intrusion, especially in areas with limited available hydrochemical data. A monitoring network with ERT instruments and wells should be established to collect regular measurements of the electrical resistivity distribution, as well as the groundwater level and chemical composition. View Full-Text
Keywords: coastal aquifer; salt-water/fresh-water relations; electrical resistivity tomography; chloride concentration coastal aquifer; salt-water/fresh-water relations; electrical resistivity tomography; chloride concentration
►▼ Show Figures 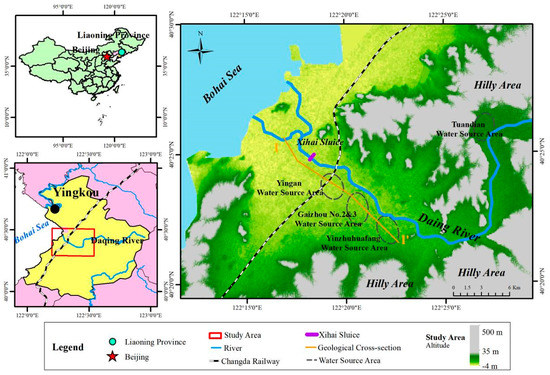