Light is an important environmental cue, and exposure to artificial light at night (ALAN) may disrupt organismal physiology and behavior. We investigated whether ALAN led to changes in clock-gene expression, diel activity patterns, and fecundity in laboratory populations of the mosquito Culex pipiens f. molestus (Diptera, Culicidae), a species that occurs in urban areas and is thus regularly exposed to ALAN. Populations were kept under 16 h:8h light:dark cycles or were subjected to an additional 3.5 h of light (100–300 lx) in the evenings. ALAN induced significant changes in expression in all genes studied, either alone (period) or as an interaction with time (timeless, cryptochrome2, Clock, cycle). Changes were sex-specific: period was down-regulated in both sexes, cycle was up-regulated in females, and Clock was down-regulated in males. ALAN-exposed mosquitoes were less active during the extra-light phase, but exposed females were more active later in the night. ALAN-exposed females also produced smaller and fewer eggs. Our findings indicate a sex-specific impact of ALAN on the physiology and behavior of Culex pipiens f. molestus and that changes in clock-gene expression, activity, and fecundity may be linked. View Full-Text
Keywords: Circadian clock; ALAN; Behavior; LED; Egg production; period; Clock; cycle; cryptochrome2; timeless Circadian clock; ALAN; Behavior; LED; Egg production; period; Clock; cycle; cryptochrome2; timeless
►▼ Show Figures 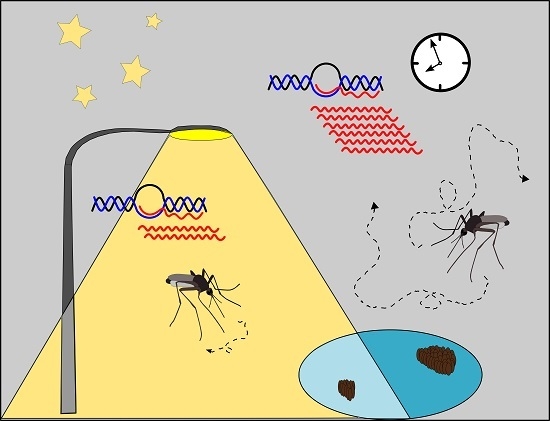