According to the characteristics of the selected variable data, this paper uses the panel ARDL model for research. Panel ARDL can solve the problem of insufficient sample size and is suitable for the study of smaller samples. Moreover, panel ARDL is more effective than other linear regression models in avoiding the endogeneity of explanatory variables and explanatory variables. Therefore, in order to test the above Hypothesis H1, we set the following research models as Equations (1) and (2):
The explained variable in Equation (1) is carbon dioxide intensity and the explanatory variable in Equation (2) is fossil fuel combustion ratio. The explanatory variable is the proportion of energy tax revenue to total tax revenue. At the same time, in order to better explore the green dividend effect of energy tax, this paper uses the relative number of the above two common pollution indicators instead of the absolute number to study.
To test Hypothesis H2, we set the following research models as Equations (3) and (4):
The explanatory variables in Equations (3) and (4) are energy consumption per unit of GDP, income tax, profit tax and capital gains tax. The explanatory variable is still the ratio of energy tax revenue to total tax revenue. Considering that the impact of energy tax revenue on other variables may be lagging, and in order to avoid the endogeneity of variable data, this paper will lag the variables in the first phase. and are first-order difference terms and white noise terms of each variable. In addition, represents the intercept term of different countries. The internal regression coefficients are the same in different countries. The subscript is a specific unit and varies from 1 to N. At the same time, this paper will determine the optimal lag time of each variable based on the minimization of Schwarz Information Criterion (SBIC).

In the panel data analysis, in order to avoid the result of pseudo-regression, it is necessary to confirm the stationary order between the variables, that is, the unit root test. In this paper, IPS test, ADF-Fisher test and PP-Fisher test are used to determine the order of stability between variables. When the results of the three methods are different, they are determined according to the voting principle. According to the results of Table 2, we can see that for the four Nordic countries and the G7 countries, all the research variables are first-order stationary, which conforms to the same order and completes the conditions of the cointegration test; in addition, the unit root test results are the same, meeting the conditions of the panel ARDL. The unit root test results of the four Nordic countries and G7 countries are shown in Table 3.

According to the “double dividend” theory of environmental tax, this paper chooses the representative energy tax in environmental tax. In terms of green dividend index, two variables, the proportion of fossil fuel combustion and the density of carbon dioxide, were selected. In terms of blue dividend index, two variables were selected: energy consumption per unit of GDP and the proportion of income tax, profit tax and capital gains tax. By using unit root test, cointegration test, Granger causality test and other econometric methods, this paper makes a comparative analysis of the four Nordic countries and the G7 countries. The experimental results show that the existence of green dividends has been found in the four Nordic countries and the G7 countries for a long time. The difference between the two is that the green dividends of the four Nordic countries are reflected in the reduction of carbon dioxide emissions, while those in the G7 countries are reflected in the reduction of fossil fuel use. In addition, in terms of blue dividends, the energy tax performance of the two economies is also very different. The implementation of energy tax in the four Nordic countries can not only reduce distorted taxes in the short term, but also promote economic growth, adjust tax structure and reflect the blue dividend in the long run. For G7 countries, the blue dividend has not been reflected in the long run.
Through this study, we can get some inspiration for the design and improvement of China’s environmental tax system. First, the realization of the blue dividend in the double dividend is to use environmental tax to offset the existing tax burden on the premise of tax neutrality, thus causing market distortions. For example, personal income tax, enterprise income tax and so on, improve the allocation efficiency of resources. Taxation of products or factors of production (e.g., labor and capital) usually results in unnecessary loss of welfare. This is the distorting effect of some taxes. For example, the imposition of personal income tax and VAT are borne by the final consumers, which inhibits the growth of domestic consumption demand and then inhibits the long-term balanced income of the economy, increases the personal burden and squeezes out consumption and investment. The increase of government purchases in GDP makes government purchases account for a large proportion of GDP, which is not conducive to economic operation. This study shows that the energy tax of the four Nordic countries and the G7 countries is accompanied by distorted tax reduction in both the long-term and short-term effects. For example, for each additional unit of energy tax in the four Nordic countries, the distorted tax will be reduced by 6.19 units (Table 5). This shows that the way to realize the blue dividend is to follow tax neutrality and implement tax burden transition. While increasing the environmental tax, substantial tax cuts for other distorted taxes will be made, the additional burden of tax will be reduced, the unnecessary loss of social welfare will be reduced and the blue dividend will be fully realized. Secondly, the dual dividend effect of energy tax in the four Nordic countries is better than that in G7 countries on the whole. This shows that the reasonable test standard of the green tax system with energy tax as its core should be in the dimensions of protecting the environment, increasing tax revenue, reducing distorted tax burden and improving energy structure. The validity of the dividend effect is fully tested.

This research was funded by the National Social Science Fund of China (17BGL051). 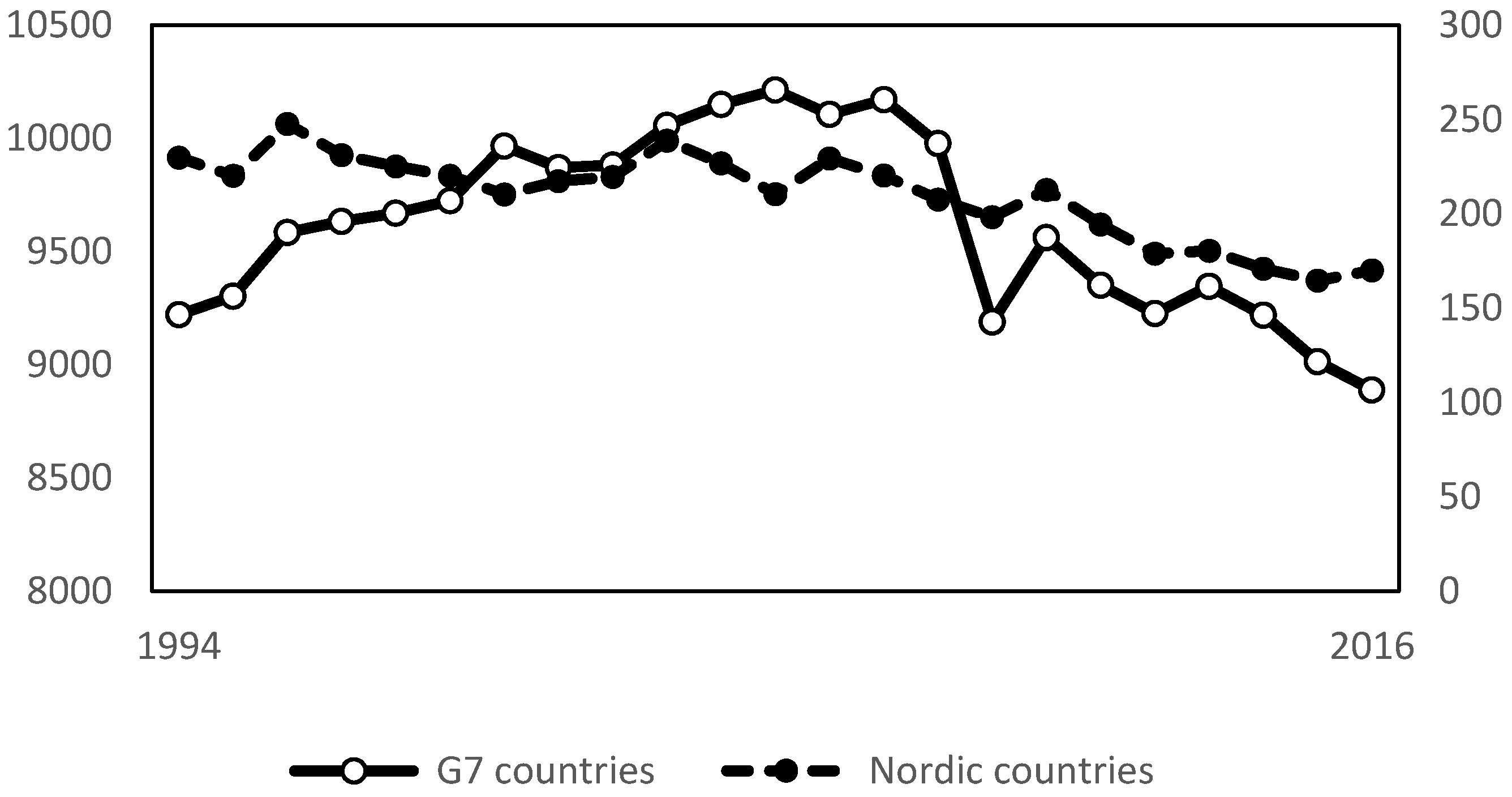