Stakeholder Engagement for Inclusive Climate Governance: The Case of the City of Turku
Previous Article in Special Issue

Coupling Relationship between Agricultural Labor and Agricultural Production Against the Background of Rural Shrinkage: A Case Study of Songnen Plain, China

Rural Livelihoods and Climate Change Adaptation in Laggard Transitional Economies: A Case from Bosnia and Herzegovina

This study analyzes farm households’ adaptation in a broad livelihood context, showing how both household internal dynamics and broader external factors, such as agro-ecological, climatic, and institutional economic and political frame conditions, influence both the perception of and adaptation to climate variations and change. Nearly a third of the households in Bosnia and Herzegovina (BH) are engaged in agriculture as one livelihood strategy to cope with the multiple shocks experienced over the past three decades, resulting in economic decline and loss of income opportunities. Based on a household survey, we analyzed the livelihoods of households in three agricultural regions in BH: how they are affected by climate change, their perceptions of climatic change, as well as various household adaptation strategies. The results were discussed in the context of the sustainable livelihoods approach. Our results indicate that rural households are relatively asset poor and highly dependent on agriculture, irrespective of geographical location or wealth. Their access to assets is further constrained by the ongoing changes in economic and political structures and processes. Negative effects of climate change were reported in terms of yield decline and reduced quality of products. On a positive note, the level of adoption of different agricultural practices and technologies indicates signs of an overall intensification strategy of agricultural production in BH, as well as adaptation to the perceived changes in climate and climate variability using the available asset base. View Full-Text
Keywords: rural livelihoods; climate change; adaptation; perceptions; agriculture; Bosnia and Herzegovina; transitional economies; sustainable livelihoods approach rural livelihoods; climate change; adaptation; perceptions; agriculture; Bosnia and Herzegovina; transitional economies; sustainable livelihoods approach
►▼ Show Figures 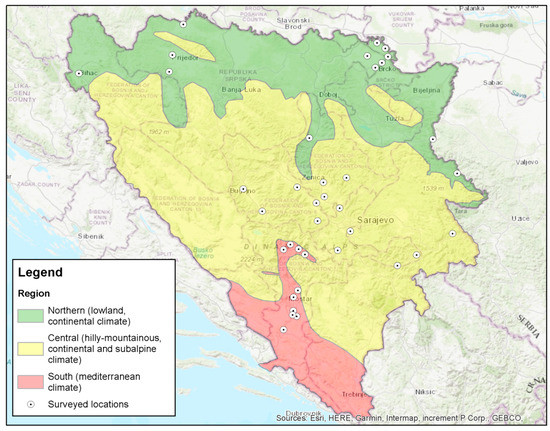