Corporate Social Responsibility and Intellectual Capital: Sources of Competitiveness and Legitimacy in Organizations’ Management Practices
Next Article in Special Issue

Can the Quality of Hospitality Services Play a Role in Sustainable Equestrian Tourism in Slovenia? Mediations, Effects, and Implications
Previous Article in Journal

A Study on Green Economy Indicators and Modeling: Russian Context

The Determinants of Income of Rural Women in Bangladesh

This study investigated the factor which influences rural women’s income after participation in small-scale agricultural farming, their contribution to the household, as well as their empowerment status. This research was conducted in Jinaigati upazila of Sherpur district in Bangladesh. A total of 80 respondents (women) from this upazilla of Sherpur were selected purposively using simple random sampling. The quantitative data were collected by in depth interviewing of the 80 respondents through personal interview. The quantitative analytical tools used to attain specific objectives included various descriptive statistics, functional analysis, multiple regression co-efficient, used to identify the factors of influencing women’s income through small-scale agricultural farming. Problem Confrontation Index (PCI) used through different problems identified scores. In accordance with the results of the educational level of woman, other sources of income, experience and training, access to credit, decision-making ability have an positive impact on rural women’s income. These variables were statistically significant. From the Problem Confrontation Index, it was found that lack of capital was the first ranked problem, need-based training the second ranked problem, high interest rate the third ranked problem, insufficient farm size the fourth ranked problem, and lack of quality of seed the fifth ranked problem. Their income from this brought remarkable positive change in their life and they had better control over their decisions and income. Finally, their active economical participation in small-scale farming assists them to overcome prejudice, socio-economic barriers, and highest empowerment attainment in the context of Bangladesh—and, if the government takes proper initiative in terms of gender policy, then rural women’s income and livelihood status will be increased remarkably. View Full-Text
Keywords: rural women; agricultural farming; sustainability rural women; agricultural farming; sustainability
►▼ Show Figures 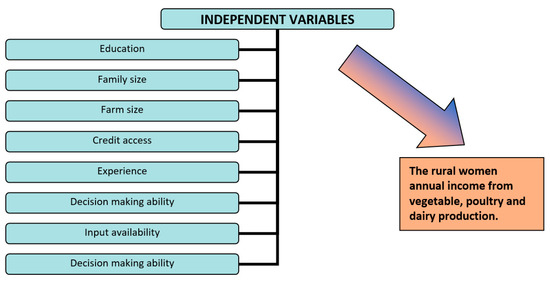